Amazon Japan has started to take pre-orders on Cosair’s upcoming PCIe 4.0 NVMe SSD. The MP600 SSDs will ship in mid-July, several days after AMD and its partners start to sell platforms that support the PCIe 4.0 interface.

At press time, Amazon Japan is offering Corsair MP600 M.2-2280 SSDs with a PCIe 4.0 x4 interface featuring 1 TB and 2 TB capacity for ￥36,936 ($320) and ￥66,852 ($579), respectively. Considering the fact that we are talking about ultra-high-end client SSDs aimed at expensive desktops, their prices are not exactly surprising. Meanwhile, keep in mind that these are not their official MSRPs. 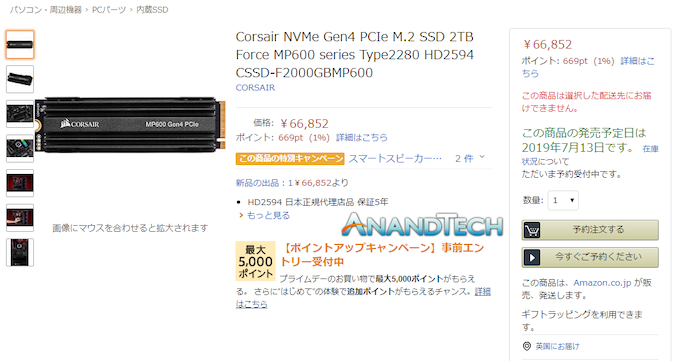 According to Corsair, its MP600 SSDs will offer up to 4950 MB/s sequential write speed as well as up to 4250 MB/s sequential read speed when used with a PCIe 4.0 x4 interface, which is substantially faster when compared to modern PCIe 3.0 x4 drives.

Corsair’s MP600 drives are based on Phison’s PS5016-E16 controller as well as 3D TLC NAND memory. Considering that Phison usually sells controllers and NAND flash memory as a turnkey solution, expect other suppliers of SSDs to offer drives very similar to the MP600 family by Corsair at around the same timeframe. In the meantime, Corsair definitely deserves a credit for starting to offer its PCIe 4.0 SSDs ahead of competitors.

We saw a number of PCIe 4.0 drives at Computex this year, so we expect the market to have a sizeable number available in due course: