Kicking off this week is SIGGRAPH, the annual North American professional graphics pow-wow that sees everyone from researchers to hardware vendors come together to show off new ideas and new products. Last year’s show ended up being particularly important, as NVIDIA used the show as a backdrop for the announcement of their Turing graphics architecture. This year’s NVIDIA presence is going to be far more low-key – NVIDIA doesn’t have any new hardware this time – but the company is still at the show with some announcements.

Diving right into matters then, this year NVIDIA has an announcement that all professional and prosumer users will want to take note of. At long last, NVIDIA is dropping the requirement to use a Quadro card to get 30-bit (10bpc) color support on OpenGL applications; the company will finally be extending that feature to GeForce and Titan cards as well. 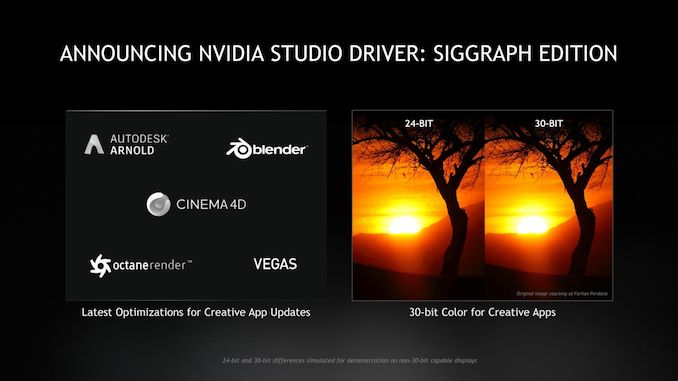 Dubbed their Studio Driver: SIGGRAPH Edition, NVIDIA’s latest driver will eliminate the artificial restriction that prevented OpenGL applications from drawing in 30-bit color. For essentially all of the company’s existence, NVIDIA has restricted this feature to their professional visualization Quadro cards in order to create a larger degree of product segmentation between the two product families. With OpenGL (still) widely used for professional content creation applications, this restriction didn’t prevent applications like Photoshop from running on GeForce cards, but it kept true professional users from using it with the full, banding-free precision that the program (and their monitors) were capable of. So for the better part of 20 years, it has been one of the most important practical reasons to get a Quadro card over a GeForce card, as while it’s possible to use 30-bit color elsewhere (e.g. DirectX), it was held back in a very specific scenario that impacted content creators.

But with this latest Studio Driver, that’s going away. NVIDIA’s Studio drivers, which can be installed on any GeForce/Titan card, desktop and mobile, will no longer come with this 30-bit restriction. It will be possible to use 30-bit color anywhere that the application supports it, including OpenGL applications.

To be honest, this wasn’t a restriction I was expecting NVIDIA to lift any time soon. Rival AMD has offered unrestricted 30-bit color support for ages, and it has never caused NVIDIA to flinch. NVIDIA’s official rationale for all of this feels kind of thin – it was a commonly requested feature since the launch of the Studio drivers, so they decided to enable it – but as their official press release notes, working with HDR material pretty much requires 30-bit color; so it’s seemingly no longer a feature NVIDIA can justify restricting from Quadro cards. Still, I suppose one shouldn’t look a gift horse too closely in the mouth.

Otherwise, at this point I’m not clear on whether this is going to remain limited to the Studio drivers, or will come to the regular “game ready” GeForce drivers as well. Keeping in mind that both drivers are essentially identical software stacks – the difference being their testing and release cadences – there’s no reason to think it won’t show up in future GeForce drivers as well. But for now, it’s only being mentioned in the Studio drivers.

Meanwhile, the latest Studio driver release, true to its purpose, will also include updated support for several applications, including Cinema 4D and Blender. So while the 30-bit color announcement is likely to overshadow everything else, NVIDIA is continuing to iterate on their software support as previously promised.

Along with their latest Studio drivers, NVIDIA is also using the show to announce their partners latest hardware and software developments.

On the hardware side of matters, another 10 Studio laptops are being announced. The NVIDIA branding program, first launched at Computex earlier this year, set about establishing a minimum standards program for participating laptops. In short, the laptops need to include a 45W Core i7 and a GeForce RTX 2060/Quadro 3000 or better, along with a calibrated display. The latest hardware release cycle will see new laptops from Lenovo, HP, Dell, and Boxx, and will bring the Studio program to 27 laptops in total. 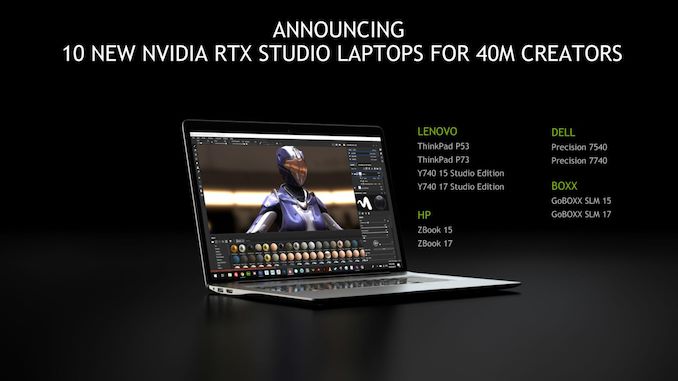 Meanwhile on the software side of matters, NVIDIA is celebrating the adoption of their RTX technology, as well as the additional applications that are adding support for it. According to the company, 40 professional visualization applications already support RTX in some form, with more to come. At this year’s show in particular, Adobe, Autodesk, Daz, and Blender are all showing off new software versions/updates that add support, typically for hardware ray tracing. NVIDIA sees RTX as an important product differentiator for the company, especially as it seems AMD won’t have comparable technology for at least another year, so it’s something the company has continued to invest in and is happy to tout that advantage. 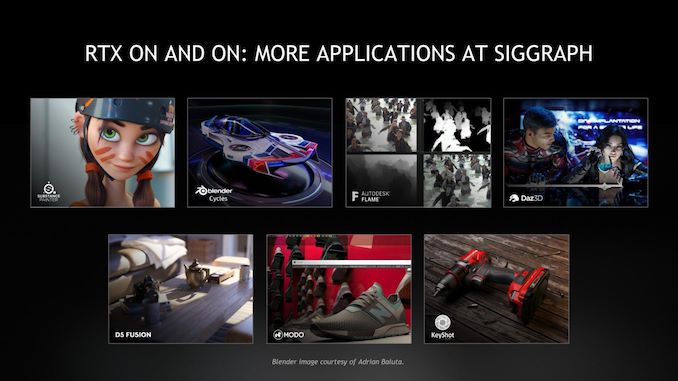