Today at Huawei’s global launch event in Munich, the company has detailed its new Mate 30 and Mate 30 Pro flagship devices. The two new phones continue Huawei’s focus on innovating in the photo capture departments, with the new Mate 30 Pro introducing innovative camera features and hardware. Naturally, as is tradition with the Mate series, it represents Huawei’s pioneer series in which it introduces the newest technologies, such as the new brand-new Kirin 990 as well as Kirin 990 5G. The new Mate 30 also introduce new designs and hardware builds – increasing battery life and minimising weight of the phones.

The Mate 30 Pro in particular introduces a new true edge-to-edge display that curves to the sides up to 90° – representing a brand-new form-factor and new ergonomics as Huawei makes away with physical buttons. Beyond all the hardware, the biggest news about Huawei’s newest devices is the fact that they will not come out of the box with Google Play or Google services preinstalled, representing a tectonic shift in the industry that’s bound to have reverberations for the next several years. 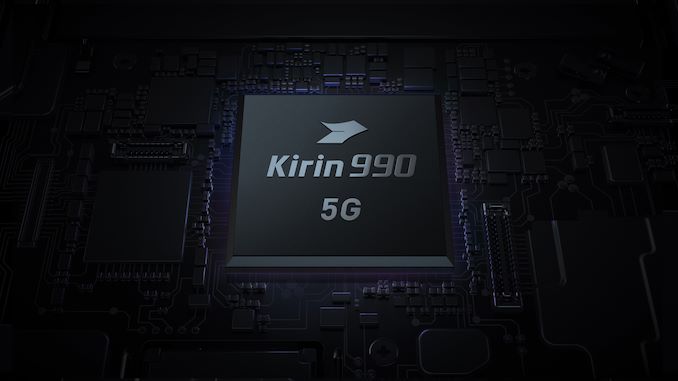 Starting off with the heart of the phone, we’re seeing both the Mate 30 and Mate 30 Pro powered by the new Kirin 990 chipsets. As we’ve covered the silicon in more detail a few weeks ago at its launch, this year we’re actually talking about two distinct new chips: The regular Kirin 990, and the Kirin 990 5G. As the name reveals the difference, the 5G variant of the chip includes a new integrated modem with support of Sub-6GHz 5G NR connectivity.

The company this year was conservative in terms of the IP of the new Kirin chipset, as this year again unfortunately the release timing of the silicon wasn’t in sync with the newest generation designs from Arm. Thus the chip again makes use of the existing Cortex-A76 CPU core, but this time around it bumps up the frequency up to 2.86GHz in the two fastest CPU cores. Depending on whether you get the regular or the 5G variant you’ll end up with a further two A76 efficiency cores at either 2.09GHz or 2.36GHz, and the same differences are found in the A55 small cores, coming in a quad-core configuration with 1.86GHz or 1.95GHz. The GPU core configuration is a Mali-G76MP16 at either 600MHz or 700MHz. HiSilicon is able to use the higher frequencies on the 5G model as it’s manufactured on TSMC’s new N7+ manufacturing node which makes use of EUV, whereas the regular variant remains on the existing N7 node.

The Mate 30 Pro is certainly the most interesting of the two new devices when it comes to their designs. The Mate 30 Pro employs a new true edge-to-edge OLED screen which curves around to 90° around the edges – essentially making this the first actually bezel-less phone out there as you’ll be seeing pure screen when viewing the phone from the front. Unfortunately, it seems Huawei this year has opted to go back to 1080p-class screens for the Pro Mate model, reducing it from the 1440p that was uniquely shipped last year with the Mate 20 Pro. Either the Mate 30 Pro will have outstanding battery life, or Huawei still hasn’t figured out how to efficiently implement 1440p in their phones.

The 30 Pro comes at a slightly weird resolution of 2400 x 1136 which results in an aspect ratio of 18.4:9. The reason for this is that there’s actually some pixels which are going to be part of the wrap-around part of the screen. The regular Mate 30 has a more traditional 2340 x 1080 19.5:9 resolution and aspect ratio.

Even though the Mate 30 Pro lists a 6.53” diagonal screen size, because of the wrap-around aspect of it, it’s only actually 73.1mm wide which is slightly smaller than the usual “large” form-factor we’re used to, similar to the Mate 20 Pro last year, which was 0.8mm narrower.

Both phones still come with display notches, however Huawei was able to reduce their size notably, and rationalises by having the full plethora of sensors available, including a 3D depth camera, the usual ambient & proximity sensors, the 32MP or 24MP front-facing camera, as well as introducing a new gesture sensor.

The big stars and a big part of the presentation today were the phone’s cameras. The Mate 30 was more conservative in this regard, and essentially, we’re seeing the same camera setup as on the P30, with the exception of the addition of OIS on the main sensor. The main camera sensor for both phones is again the 40MP RYYB sensor employed in the P30 series, however the Mate 30’s pictures will notably improve thanks to a newer generation ISP in the Kirin processors. The aperture on the Pro unit is larger f/1.6 while the regular Mate 30 will make due with f/1.8 optics.

The telephoto module on both phones is the trusted and good 3x telephoto lens and 8MP sensor with an f/2.4 aperture. Personally I wasn’t too convinced of the periscope 5x module of the P30 Pro so I’m glad Huawei stuck around with the more traditional module in the Mate 30’s.

It’s in the wide-angle lens where the two phones drastically differ. While the Mate 30 has seemingly the same 16MP f/2.2 module as on the P30, the new Mate 30 Pro introduces a brand-new and industry first sensor of its type. The Mate 30 Pro’s wide-angle is makes use of a new equally large sized 1/1.54” sensor with a 40MP resolution. The sensor is a regular Bayer RGGB layout, unlike the RYYB 40MP main camera sensor. It employs a wide f/1.8 aperture with a wide-angle view equivalent focal-length of 18mm.

The new sensor however no only serves as the wide-angle eyes for the phone, but also has unique video recording capabilities. Huawei now finally introduced 4K60 recording, and also supports HDR+ video formats. The most eye-brow raising feature of the new module however is its quoted 7680fps slow-motion capture. Huawei demoed 2000fps samples at the presentation, and lists the 7680fps mode as being able to be recorded at 720p.

Probably the biggest and most important announcement today wasn’t the Mate 30 or Mate 30 Pro as devices, but the fact that the new units will not be released with Google’s services such as the Play Store or Play Services preinstalled on the phone. Unfortunately this is the end result of the ongoing trade-war between the US and China, with Huawei considering themselves as being used as bargaining chips and pawns by the US’s decision to block the company from all commercial interaction with US companies, something the company describes as having nothing to do with security or even 5G infrastructure concerns.

The implications here are huge both for Huawei as for the overall industry, and there will be no clear winners on either side, and on the long-term, it seems Google and the Android ecosystem has more to lose. Huawei is pushing forward with a full replacement of Google’s services, with the alternative being called “Huawei Mobile Services”, or HMS, in order to offer the same functionality that were offered by Google’s GMS.

In a follow-up interview with Richard Yu clarified one important question in regards to how users will have control over the software they’ll be able to install on the Mate 30 and Mate 30 Pro; beyond offering their own app store called the “Huawei App Gallery”, Yu said that it might be possible for users to install the GMS core onto the phones through either third-party app stores or websites. Huawei here is likely to resist as little as possible in terms of limitations as to what users will be able to do with their phones, and he also confirmed that users will be able to bootloader unlock the Mate 30 and 30 Pro.

In case that the trade sanctions imposed by the US were to be lifted, Richard Yu explained that they’d be ready “immediately” ready to reintegrate the Google services and applications onto their firmware and push out updates to their phones.

In the meanwhile, Huawei is planning long-term and investing into their own HMS ecosystem. In order to attract developers and to gain traction, the company is making a available a $1bn fund for developers, ecosystem and marketing to offer alternatives for their users. Yu described one way to attract developers is that they will adopt a 15/85% share on app purchases, giving developers a larger piece of the pie than the 30/70 share that currently is in place for the Play Store and the iOS App Store. Huawei explains that they don’t want to do this, but given the circumstances, they’re forced to.