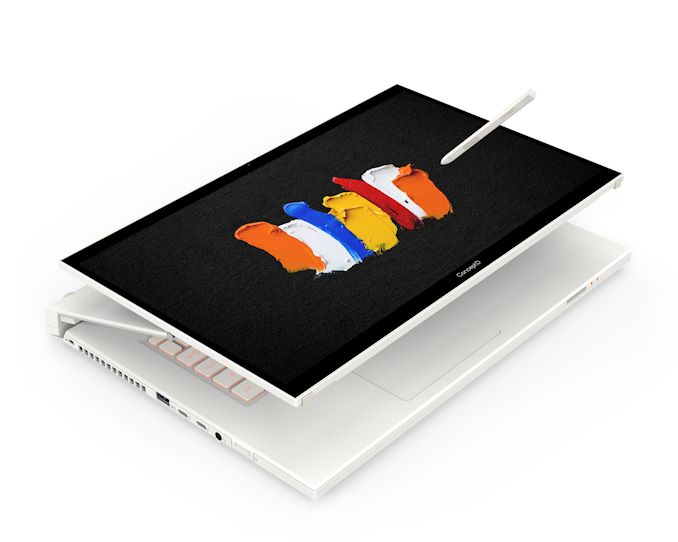 For users that regularly track Intel’s laptop process lines, then you will likely be used to the nomenclature that Y-series is sub 10 W, U-series is usually 15 W but sometimes 28 W, and the H-series sits at 35 W and 45 W levels. We often see the Y-series go into ultra-portables, the U-series in the flagship devices, and the H-series always go into something more substantial that requires a lot of grunt and where performance takes precedence over portability. To date Intel has only released the U-series hardware on its 10th Gen, so the fact that Acer gave us a pre-briefing on one of its new laptops and stated that it has a 10th Gen H-series CPU was quite a shock. The new CPU will go into the company’s new Ezel line of laptops, designed for content creators: the name Ezel is a play on words of ‘Easel’, as in a painters’ easel or tripod.

Before we get into the new Ezel, it should be noted that Intel technically has two families of CPUs which it calls ‘10th Gen’, one based on its 14++ manufacturing node called Comet Lake, and one based on its 10+ node called Ice Lake. Even though Acer doesn’t state specifically, we can 99.95% guarantee that we are talking about a Comet Lake processor here, based on the older Skylake microarchitecture. This is primarily because Intel has this week confirmed to us that its 28 W Ice Lake processor is only now ready for its partners – so a 45 W variant would absolutely not be ready at this time. Intel has already released 9th Gen 45 W mobile processors, and Comet Lake is just a tweaked variant of those, so it stands to reason that these are Comet Lake. 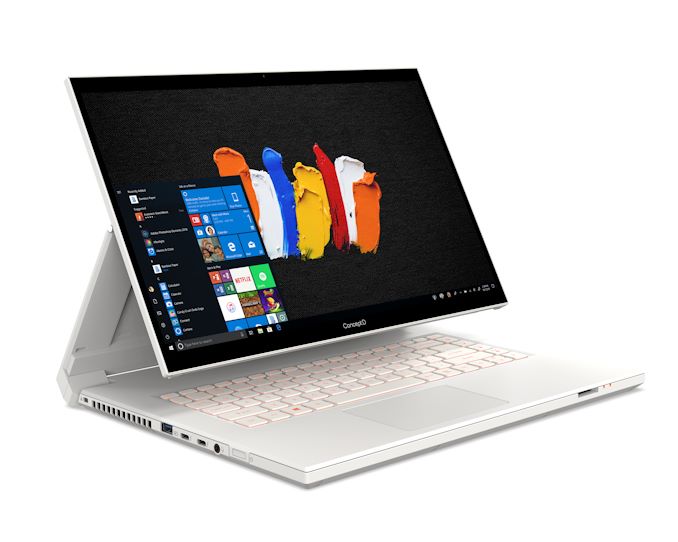 As for the Ezel, it will come in two varieties: the Ezel and the Ezel Pro. Both devices will get 45 W processors, however the standard Ezel will use consumer hardware, such as a Core i9 processor, non-ECC memory and GeForce RTX graphics, while the Ezel Pro will use a H-series Xeon E processor, ECC memory, and Quadro RTX graphics.

The Ezel builds on Acer’s design of an adjustable display that can rotate about a horizontal axis, allowing a user to bring it closer to them rather than having the display connected at the hinge of the base of the laptop. This allows for closer inspection of the screen in a more comfortable position to a traditional laptop. On a personal level, I’d point out that it is worth seeing in person as to how nice this sort of monitor functionality is really nice to work with. Acer is also bundling the Ezel with a Wacom EMR pen, making the device great for artists and designers. 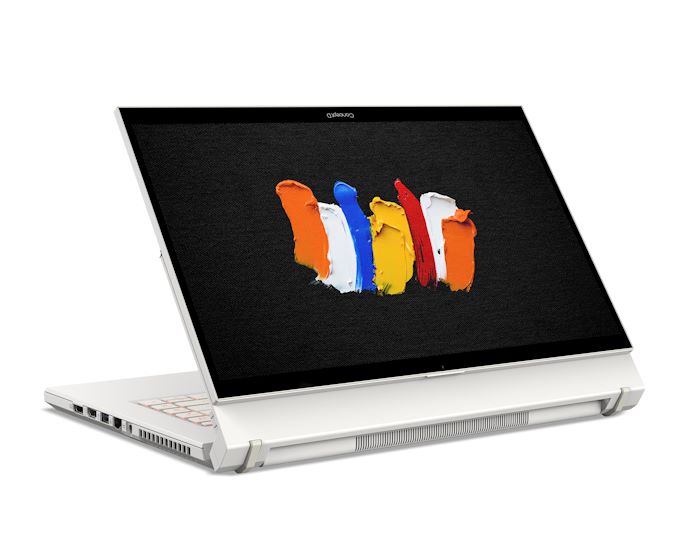 The display is a 15-inch 4K IPS panel, with a 400-nit brightness and factory color calibration, good for reproducing 100% of the Adobe RGB color gamut with an accuracy of dE < 2. Users can also manipulate the color settings through software in the ConceptD Palette. The display uses Gorilla Glass 6, allowing for even brash artists, and comes with an anti-glare coating.

For memory and storage, there will be up to 32 GB of DDR4, and up to 2TB PCIe SSDs (that’s plural). The idea is that this hardware should be able to edit 4K video in real time, either for gig workers on the Ezel, or businesses with the Ezel Pro. Both laptops are part of the RTX Studio platform, which means that the hardware has gone through NVIDIA’s own testing for creator app validation.

Connectivity on both devices includes two TB3 ports, an SD card slot, DP1.4, HDMI 2.0, and a fingerprint sensor. Acer says that the laptop has been designed to run all-out at under 40 dB. Unfortunately no battery capacity or weight was mentioned.

Acer did give a suggesting pricing and timeframe for the Ezel and Ezel Pro, however we were emailed after our briefing to state that they’re changing it to ‘TBD’ depending on design finalization in order to align with other releases (Intel’s 10th Gen H-Series might not have a fixed date yet, as at the time of writing they have not even been announced. As it is CES, Intel might be announcing them as part of the show).