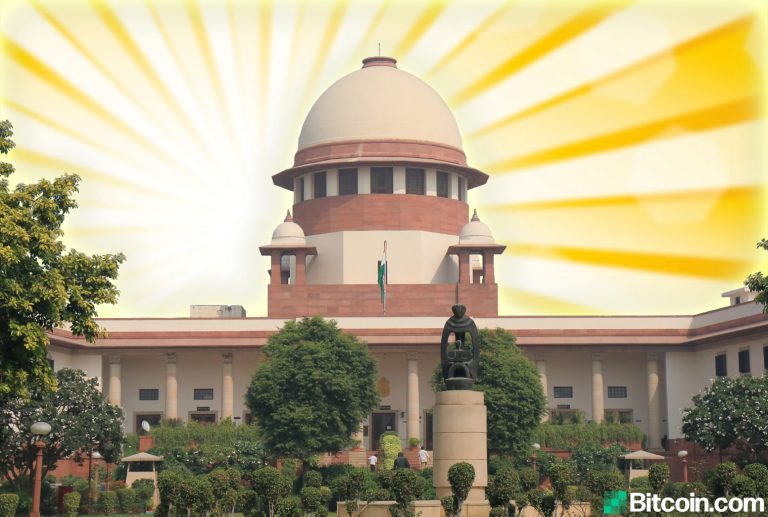 A historic day for the Indian crypto community, the supreme court has finally ruled on the case against the banking ban by the central bank, the Reserve Bank of India (RBI). The court held that the RBI circular which places a banking ban on the crypto industry is unconstitutional.

On Tuesday, the Supreme Court of India finally ruled on the case against the banking ban by the Reserve Bank of India. Indian news platform Crypto Kanoon reported from the courtroom. “The Judgment Day has finally arrived,” the team said. At 10:45 a.m. in India, Crypto Kanoon tweeted:

The supreme court concluded hearing the arguments against the RBI ban on Jan. 28, after almost two years since it first decided to hear the case. The court heard extensive arguments from the counsel for the Internet and Mobile Association of India (IAMAI), Ashim Sood, followed by the counsel representing several crypto exchanges, Nakul Dewan. It also heard the arguments in favor of the ban by the central bank’s counsel, Shyam Divan.

The RBI issued a circular in April 2018 banning regulated financial institutions from providing services to crypto businesses. The ban went into effect three months later and banks subsequently closed the accounts of crypto exchanges, forcing some of them to shut down, including Zebpay, Coindelta, and Koinex.

The cryptocurrency community all over the world has been eagerly waiting to see what India will do about its cryptocurrency policy. The Indian government has been sitting on a draft bill that seeks to categorically ban cryptocurrencies, except state-issued ones, since February last year. The “Banning of Cryptocurrency and Regulation of Official Digital Currency Bill 2019” was drafted by an interministerial committee (IMC) tasked with studying all aspects of cryptocurrency and providing recommendations for India’s crypto policy. The IMC was headed by former Finance Secretary Subhash Chandra Garg who has since resigned from his position in government. Nonetheless, he still holds the view that cryptocurrencies have “a very short future,” believing that they are “essentially worthless codes.”

The bill also provides for the RBI to issue a central bank digital currency. The RBI has already been looking into this area, Governor Shaktikanta Das revealed in December last year. “As and when the technology evolves with adequate safeguards, I think it is an area where the Reserve Bank will certainly look at seriously at an appropriate time,” he said.

This bill was expected to be introduced in the winter session of parliament last year but was not, and the government has since been silent about it. The crypto community believes that the bill is flawed and has been campaigning for the government to re-evaluate the IMC recommendations. Meanwhile, both the RBI and the Indian government have confirmed several times that cryptocurrency is not banned in India.

Even with a banking restriction, the Indian crypto community has found a way to continue buying, selling, and trading cryptocurrencies. A number of cryptocurrency exchanges launched peer-to-peer trading in order to continue providing INR access to their users.

Several exchange service providers have recently made announcements regarding their services. For example, the U.K.-based banking platform Cashaa has been expanding its operations in India and is now offering no-fee deposits and withdrawals. The company is also planning a roadshow this month to prepare Indian crypto users for the next bull run. Global exchange Binance and popular Indian exchange Wazirx have joined forces, with the latter launching India’s first initial exchange offering (IEO). The token can be used to pay trading fees on Wazirx at a 50% discount.

Furthermore, Zebpay, formerly one of the largest crypto exchanges in India, relaunched on Monday, ahead of the supreme court judgment. The exchange shut down its Indian operations in September 2017, shortly after the RBI ban went into effect. For the relaunch, the exchange is offering five crypto-to-crypto trading pairs with no trading fees for the entire month.

What do you think of the Indian supreme court’s ruling today? Did you expect the supreme court to rule against the RBI? Let us know in the comments section below.

Images courtesy of Shutterstock and the Indian government.