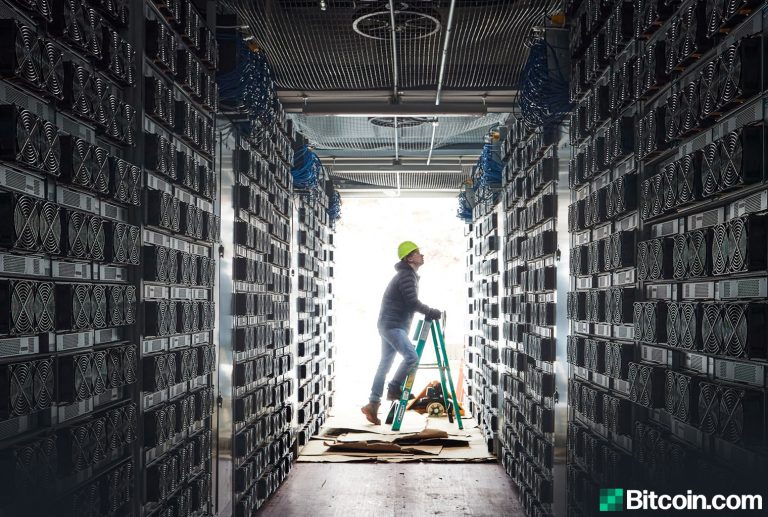 On Thursday, a natural gas-based power plant in Dresden, New York, Greenidge Generation LLC, revealed the energy provider has the capacity to mine around $50,000 worth of bitcoins (5.5 BTC) every day. The 65,000 square-foot natural gas utility plant was upgraded when the firm installed 7,000 bitcoin miners that leverage some of the cheapest natural gas prices in the U.S. Moreover, Greenidge hopes to increase the capacity from its current 14MW to 106MW in the future.

A natural gas provider located in New York’s Finger Lakes region is leveraging its native energy source to mine bitcoins. Greenidge Generation has developed a “behind-the-meter cryptocurrency mining operation” which makes the operation ideal for mining digital currencies. According to Nishant Sharma from blocksbridge.com, the Greenidge site has a team of crypto experts and seasoned power plant operators.

“Greenidge is pioneering a new business model by which other power plants in the U.S. can increase their profitability for investors and also contribute to a new decentralized world,” Sharma told news.Bitcoin.com on Thursday. The 65,000 square-foot facility currently houses 7,000 bitcoin miners which capture around 14MW of power. The plant has room to increase the capacity to over 106MW and Greenidge says they are open to international investors for either hosting or equity partnerships.

In addition to the current capacity, Greenidge utilized industry partners and workers from surrounding New York counties in order to complete the mining operation in “less than four months.” The power plant is also partnered with Atlas Holdings, a private equity operation that is overseeing the power plant’s mining process. Atlas’s partnership with Greenidge represents a $65 million investment into the facility and it wasn’t just the installation of 7,000 machines; funds were spent on the power plant’s conversion costs and infrastructure changes as well. When the plant was a coal mine, Atlas used considerable efforts to convert the site into a natural gas and biomass facility and now the operation solely uses natural gas.

The Finger Lakes region power plant changed from coal to natural gas in 2017 and Greenidge’s operations became an environmentally-sound energy source. Because of the transformation, the company is approved by the New York State Department of Environmental Conservation and the U.S. Environmental Protection Agency. Greenidge was then able to produce cleaner energy while offering the community job opportunities as well.

By Leveraging Crypto Mining, the Greenidge Bitcoin Mine Is a ‘One of a Kind’ Project

Greenidge operators also understand that the Bitcoin network operates 24/7 with no downtime and the company is used to such commitments. “As power plant operators with a unique commitment to environmental stewardship, running assets reliably 24/7, 365 days per year is in our DNA,” Dale Irwin, CEO of Greenidge, explained during the announcement. “We are up and running successfully and bringing that very same discipline and commitment to our mining operations.” Irwin added:

By partnering with cryptocurrency experts, we’ve created a truly ‘one of a kind’ project and we’re excited to continue to grow.

Irwin further said that the firm also looks forward to providing new jobs and generating tax revenue for local schools and government services in the area. The project itself is a testament to Greenidge and Atlas Holdings showing a firm “commitment to New York State and Yates County.” Kevin Zhang, director of Blockchain Strategies at Greenidge Generation, looks forward to seeing the behind-the-meter crypto operation trend continue. “A power plant generating electricity behind-the-meter to energize its very own mining operation allows investors to tap the profitability of not only cryptocurrency markets but also energy markets,” Zhang remarked.

“What’s equally impressive has been the forethought, diligence, and collaboration towards developing an institutional-grade business that is regulatory-compliant and competitive for many years to come,” Zhang added.

Natural Gas and Bitcoin Mining – A Gold Rush in the Making

During the last two years, natural gas, associated gas, and flare gas schemes have been hailed as a solution to better refine bitcoin mining and energy solutions in general. In July 2019, news.Bitcoin.com’s Lubomir Tassev reported on how bitcoin mining can help energy producers reduce their carbon footprint. There are a few businesses betting that gas schemes and excess natural gas will help fuel the digital currency revolution. A Canadian firm called Upstream Data is leveraging vented gas for crypto mining operations. Crusoe Energy Systems is developing its own gas flare technology scheme that mines cryptocurrency as well. EZ Blockchain developed a mobile flare mitigation system that can mine digital currencies but also be deployed anywhere.

Greenidge Generation’s behind-the-meter cryptocurrency mining operation will likely spur other natural gas firms to start mining. Businesses that have excess energy or the square footage to host a mine might see the extra opportunity and the profits accrued by other power plants that are already leveraging this idea. Natural gas firms can sometimes sell excess energy to other types of consumers, but at times they are forced to flare or vent it into the atmosphere if they produce too much. Power plants that deal with natural gas will quickly realize that they can use the excess energy produced on-site to mine bitcoins for profit instead.

Did you know you can earn BTC and BCH through Bitcoin Mining? If you already own hardware, connect it to our powerful Bitcoin mining pool. If not, you can easily get started through one of our flexible Bitcoin cloud mining contracts.