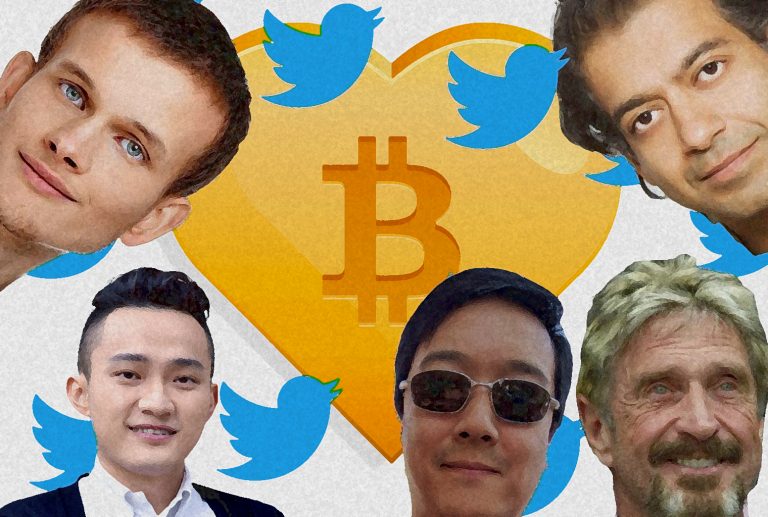 The 35 Most Influential Bitcoiners Dominating Crypto Twitter by Follower Count

Twitter has become home to cryptocurrency influencers who use it for evangelism, spreading news, shilling coins, and shaming certain projects. Of course, the more followers a crypto thought leader has on Twitter, the greater their reach and influence. The following is a look at the top crypto Twitter (CT) influencers in 2020 and the number of followers these people have obtained in order to remain a member of crypto’s social media elite.

News.Bitcoin.com has compiled a list of 35 individuals who leverage the Twitter social media platform to create a buzz about cryptocurrency and blockchain solutions. During the last few years, Twitter has outpaced forums like bitcointalk.org and Reddit, and most community members regularly flock to Twitter now. Newcomers to the crypto Twitter scene will swiftly find out who the top CT personalities are and the platform itself recommends these individuals nearly every day. The following 35 personalities have a lot of Twitter reach.

The following list represents people within the crypto and blockchain industry with at least 100,000 followers. Our list is also compiled of people who use their real identity and we removed anonymous influencers from the list for now. News.Bitcoin.com plans to follow up with a second study that includes CT influencers who don’t use their real identity. Crypto’s current Twitter elite with 100,000 followers or more are individuals who have significant reach, which is the number of impressions or engagement a tweet holds.

The top of the list belongs to crypto influencers who have 800,000 Twitter followers or more. The amount of reach and engagement is much higher than anyone on this list and these people get thousands of likes and retweets per day. The top crypto Twitter personality is Tron founder Justin Sun who has a whopping 2 million followers. Interestingly, Sun only joined Twitter in August 2017, but since then he’s managed to gather a couple million followers.

The former antivirus tycoon and now crypto evangelist John McAfee follows behind Sun. McAfee joined Twitter in November 2012, and over the last eight years has amassed 1 million followers. The often candid McAfee has been a crypto proponent for years now speaking at crypto conferences but more recently McAfee has allegedly been living on the run from U.S. law enforcement. Vitalik Buterin, one of the founding members of Ethereum, has 892.7K followers and joined Twitter in 2011. Not too far behind Buterin is Litecoin’s creator Charlie Lee. LTC’s creator has gathered 831.3K followers since 2008 and both Buterin and Lee are very involved with the crypto community’s discussions.

There’s a bunch more mid-weight CT influencers than the thought-leader heavyweights on Twitter. They may not get as much engagement as the top dogs mentioned above but they still carry significant reach. Behind Charlie Lee is Naval Ravikant otherwise known as the ‘Angel Philosopher.’ Naval has been sharing insights on Twitter about cryptocurrency and blockchain and has gained 776.3K followers. The American entrepreneur and venture capitalist Marc Andreessen has written extensively about Bitcoin and his firm Andreessen Horowitz has invested in numerous blockchain startups. Andreessen joined Twitter in 2007 and has 735.9K followers. Another popular venture capitalist on Twitter is Fred Wilson who has 662.7K followers since registering in 2007. Wilson is the cofounder of VC firm Union Square Ventures and he’s a big believer in cryptocurrency and blockchain solutions.

Bitcoin.com’s executive chairman Roger Ver follows behind Wilson with 597K Twitter followers. Ver is well known for wholeheartedly believing in bitcoin during the early days and for investing in popular companies in the crypto industry including Blockchain.com, Purse.io, Bitpay, Kraken, Shapeshift, and Safello. Silicon Valley venture capitalist and Andreessen Horowitz partner Chris Dixon has 574.2K followers and he once said bitcoin might reach $100,000 per coin. Andreas Antonopoulos has 507.4K followers on Twitter and joined the platform in 2013. Antonopoulos is a well known bitcoin evangelist who speaks at events and has written books like “Mastering Bitcoin,” “The Internet of Money 1 & 2,” and “Mastering Ethereum.” Behind Antonopoulos is Binance founder Changpeng Zhao (CZ) who currently has around 490.1K followers. 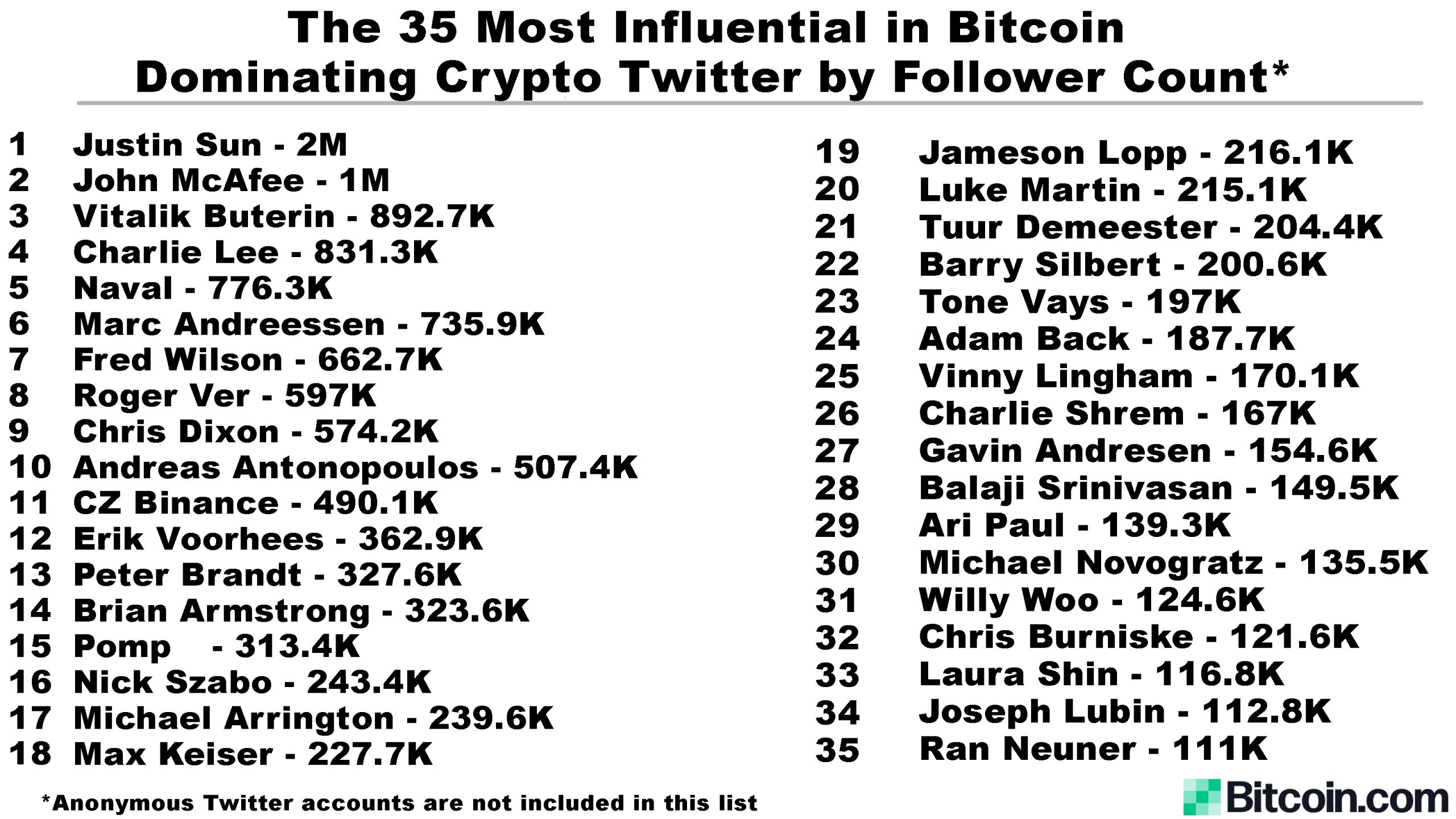 Will the Next Big Name in Crypto Be Artificial?

There are definitely a few others who make it into the lightweight list including Bitmain’s cofounder Jihan Wu (110.1K), Lightning Labs’ Elizabeth Stark (102.6K), crypto-journalist Joseph Young (100.4K), Coinshares’ Meltem Demirors (98.9K) and the Keiser Report cohost Stacy Herbert (95K). Most of the influential women on Twitter have accounts with 100,000 followers or less. Unchainedpodcast.com Laura Shin and Lightning Labs executive Elizabeth Stark have numbers just above the 100K threshold.

The top 35 crypto Twitter elite list shows a number of people who have been involved in the crypto scene for over 5-6 years while others have only been around for a few. Some of the newer folks on the CT scene have been accused of paying for engagement, using bots and buying followers to grow their reach.

Just recently The Block analyst Larry Cermak explained how he discovered a crypto industry executive from Okex was allegedly paying $0.50 for comments and retweets. “That’s how they want to make him ‘the next BIG name in crypto,’” Cermak wrote on March 4. During the second week of February, Anthony ‘Pomp’ Pompliano from Morgan Creek Digital was suspended from Twitter and a slew of community members accused him of faking his reach.

“Did Pomp get suspended because of the follow/unfollow bot he was using to juice his follower count?” tweeted Pierre Rochard.