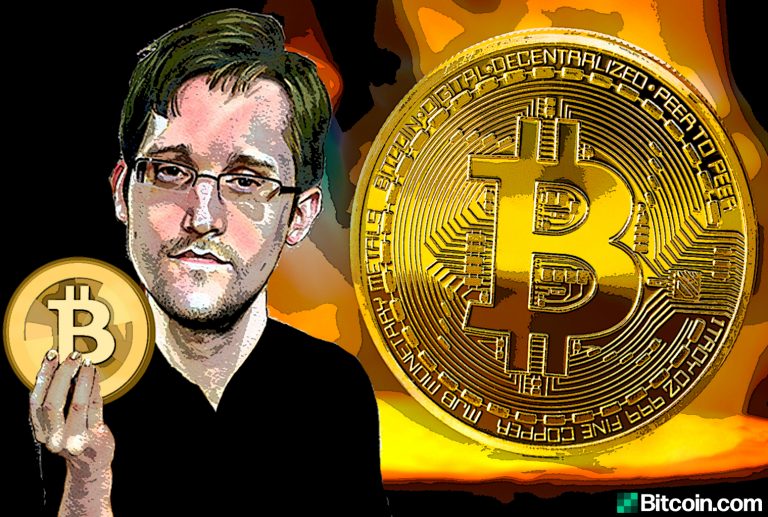 Following three consecutive days of losses shedding $50 billion off the cryptoconomy, digital currency markets lost another $44 billion in a matter of hours on March 12. Not only did ‘Black Thursday’ wreck traditional markets, but gold and bitcoin felt the brunt as well. Amidst the sell-off, the whistleblower Edward Snowden said that he “felt like buying bitcoin” as he believes the price drop was invoked by “panic” rather than fundamentals.

The cryptoconomy was punched directly in the gut on March 12, as BTC prices slid from $7,648 per coin to a low of $3,870 on Thursday afternoon. The drop was the biggest in 2020 and the lowest dip BTC markets have seen since March 2019. Crypto prices have rebounded a hair since the market rout on Thursday and BTC is currently hovering between $5,300-5,600 per coin. During the course of ‘Black Thursday,’ many investors who got into crypto early said that even they were shaken by the swift downfall.

“Doesn’t matter that I’ve been around bitcoin for a long time, and that my bullish case is still intact – seeing this brutal 1-day move gives me anxiety. Sitting tight can be the hardest thing,” Tuur Demeester tweeted on Thursday. “I’ve been doing this a while, since 2014 professionally and before that personally,” said Alistair Milne. “Let me just say that this is right up there with the most OMG, adrenalin-pumping moments I’ve ever experienced in Bitcoin/crypto. Sincerely hope everyone is OK.”

Meanwhile, as the price of BTC and most other digital assets dropped like a falling knife, the notorious whistleblower Edward Snowden said that it was the first time in a while he felt like purchasing bitcoin. Snowden’s Thursday evening tweet said:

This is the first time in a while I’ve felt like buying bitcoin. That drop was too much panic and too little reason.

It’s not the first time Snowden has talked about cryptocurrencies, as he’s mentioned bitcoin in the past on various occasions. In September 2019, the U.S. Department of Justice (DoJ) announced a lawsuit against Snowden and decided to take all the proceeds from his book sales. A few hours after the DoJ lawsuit went viral on the web, Snowden tweeted: “In conclusion, this is good for bitcoin.”

Snowden also did an interview with the American Civil Liberties Union in 2018 where called the technology the “first free money” system in the world. “Bitcoin may not yet really be private money, but it is the first ‘free’ money,” Snowden stated during the discussion. In 2016, the whistleblower also once said that “new technologies raise the possibility of unstoppable tax protests.”

Snowden’s latest bitcoin tweet was welcomed by the crypto community and the tweet has been retweeted 2.6K times and has over 12,000 likes at the time of publication. “In times of systemic disruptions Bitcoin should be seen as a serious monetary alternative,” Bisq’s Manfred Karrer said in response to Snowden’s tweet. “Printing money like hell will have now a moral justification in contrast to events before like the bank bailout 2009, thus leading to a total overshoot and an extreme stress test.”

A number of crypto enthusiasts shared the same sentiment on Thursday, even though many people were liquidated and lost a considerable amount of their portfolio’s value. “I’m buying. This is why bitcoin was invented,” tweeted Digital Currency Group founder Barry Silbert on Thursday. Francis Pouliot the founder of Bull Bitcoin said that he noticed a lot more buying than usual during the market rout. Pouliot wrote:

If it’s any consolation, Bull Bitcoin is having its busiest day of the year. Inbox and new sign-ups exploding. Had to cancel my plans to hit the beach. People are most definitely FOMO buying the bitcoin dip at the OTC level. Twice more transactions from buyers than sellers.

Snowden’s tweet has consoled traders and crypto proponents who now believe the bitcoin bottom is in. “Just got paid in bitcoin at the absolute bottom,” one bitcoiner tweeted. “In all seriousness, if this isn’t the bottom then we’re in for a horrible few months/year,” a trader wrote after the dust settled. “Bitcoin is carving short term bottom near $4K after a massive 50% decline,” tweeted Cryptoveins.

“Bitcoin is down more than 50% and broke many key supports such as $5,000 against the U.S. dollar. BTC price seems to be forming a short term bottom near $4,000 and it could recover,” the analyst added.

I doubt the low is in. Maybe a pause/bounce for now before the next drop lower to 3100. I’m on sidelines for now #btc

Meanwhile, despite Snowden’s tweet and other ‘bottom’ feeders like Barry Silbert, a few skeptics don’t believe the absolute bottom is in. “No way it’s in,” crypto proponent Savage BTC explained. “Now that we know bitcoin is correlated to every financial asset in the world, the first question should be, is the market bottoms in? Which is highly unlikely considering we haven’t seen any earning for companies post [coronavirus].” The popular cryptocurrency trader Peter Brandt who called the BTC top in 2017 seems to have a bearish outlook as well.

“If I interpret the chart without bias, I would say sub $1,000,” Brandt tweeted.

Disclaimer: This article is for informational purposes only. It is not an offer or solicitation of an offer to buy or sell, or a recommendation, endorsement, or sponsorship of any products, services, or companies. Bitcoin.com does not provide investment, tax, legal, or accounting advice. Neither the company nor the author is responsible, directly or indirectly, for any damage or loss caused or alleged to be caused by or in connection with the use of or reliance on any content, goods or services mentioned in this article. Price articles and market updates are intended for informational purposes only and should not be considered as trading advice. Neither Bitcoin.com nor the author is responsible for any losses or gains, as the ultimate decision to conduct a trade is made by the reader. Cryptocurrency prices referenced in this article were recorded on Friday, March 13, 2020, at 11 a.m. EST.

The post Edward Snowden ‘Felt Like Buying Bitcoin’ While Traders Hunt for the Market Bottom appeared first on Bitcoin News.