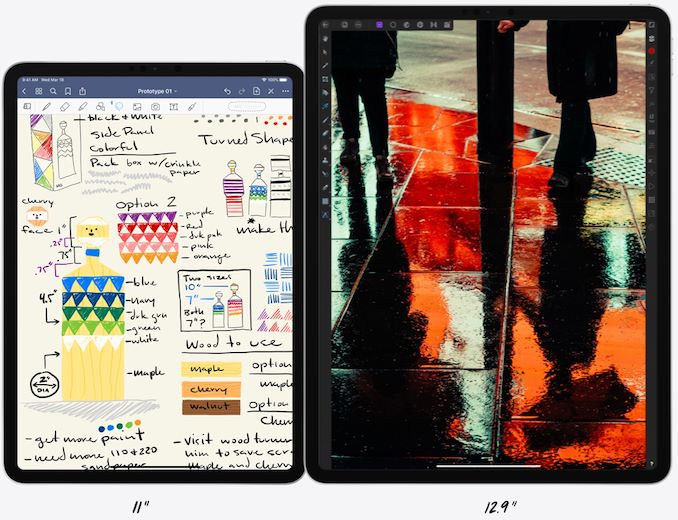 Apple’s iPad Pro has always been about bringing tablets closer to laptops, in a bid to cater professional users and satisfy their requirements. Today, Apple announced its 4th Generation iPad Pro, that on one hand further blurs the gaps between tablets and notebooks, but on the other hand uses the key advantage of the former over the latter — portability — to enable new use cases. Among the highlights of the 2020 iPad Pro are its improved camera with a depth sensor (which Apple for describes as a LiDAR module, more on that later), trackpad support (which requires a new keyboard), and faster connectivity. 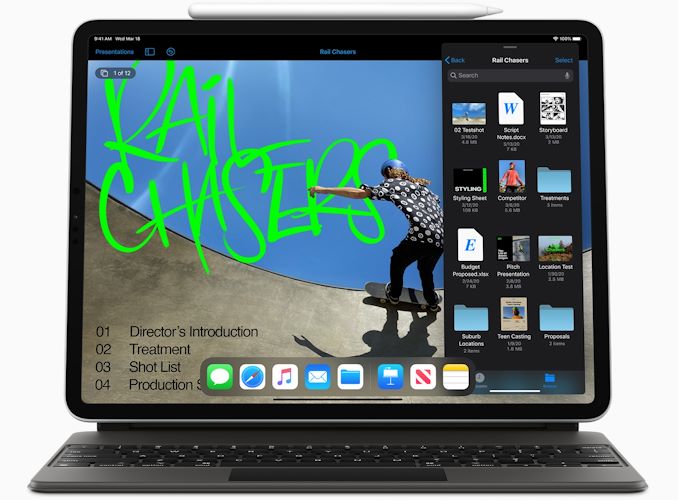 The new Apple iPad Pro 2020 resemble the company’s previous-generation professional tablets introduced 1.5 years ago: the latest iPad Pros feature the same design with relatively thin bezels, coming in Space Gray or Silver aluminum chassis, and featuring 11-inch (2388×1668) or a 12.9-inch (2732×2048) Retina display with a smooth 120 Hz refresh rate, 600 nits brightness. Since the new tablets use exactly the same chassis as their predecessors, they have the same dimensions, however their weight has increased due to the new internals — 473 grams (1.04 pounds) for the 11-inch Wi-Fi+4G model, and 643 grams (1.41 lbs) for the 12.9-inch Wi-Fi+4G model. 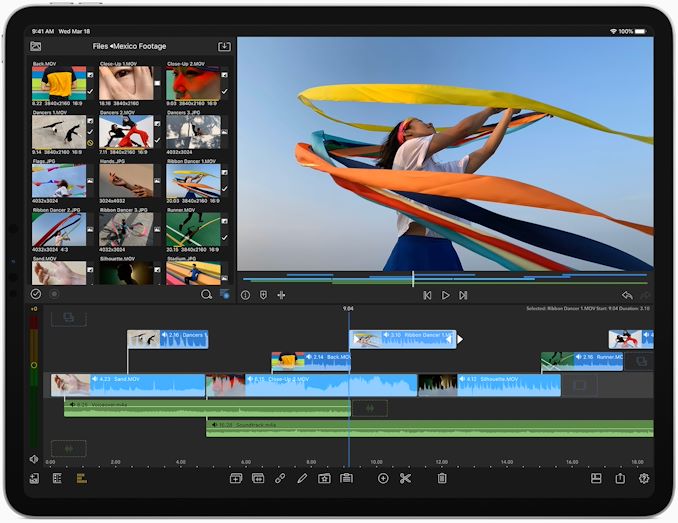 Speaking of architecture, it is necessary to note that the new 4th Generation Apple iPad Pro tablets are based on the A12Z Bionic application processor, a revamped version of the A12X Bionic system-on-chip that powers previous-generation iPad Pros. The new SoC received an eight-cluster GPU (vs. a seven-cluster GPU in case of the A12X), tuned performance controllers, and an enhanced thermal architecture, which might mean higher clocks for eight general-purpose CPU cores. We don’t have any more specific information on the A12Z, with the most important question whether this is actually a new design, or just a re-binned variant of the A12X.

With improved CPU and GPU performance, the 2020 Apple iPad Pro gets closer to advanced notebooks as horsepower provided by the A12Z promises to be similar to that of mainstream x86 CPUs. 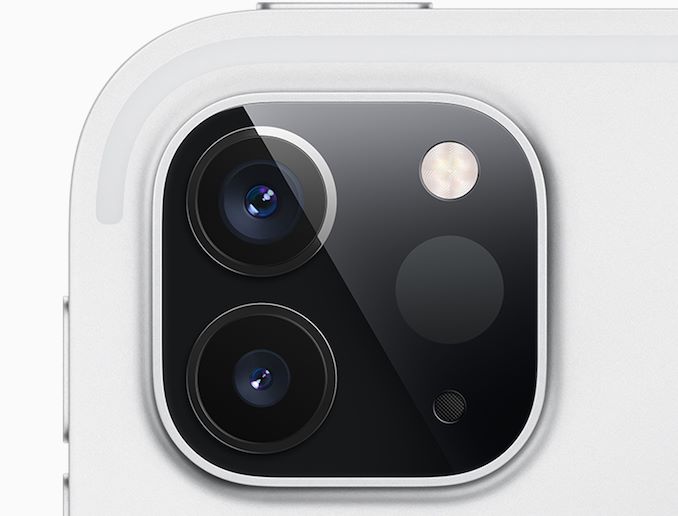 In addition to the new SoC, one of key improvements of the new iPad Pro tablets is their new main camera that now features a 12 MP wide camera module, a 10 MP ultrawide camera module, a LED flash, and a 3D depth sensor that can measure the distance to surrounding objects up to 5 meters away both indoors and outdoors.

Apple calls the new module a LiDAR scanner, however we don’t know if this actually is an actual LiDAR – the technical definition of a LiDAR is a module that uses an illuminator (Most of the time, a laser, hence the name) and a scanning beam. If Apple has been able to actually include such technology, that would quite a novelty and first in the industry. It’s however also possible that Apple is doing a marketing experiment here and the technology behind the sensor would simply be similar to the time-of-flight (ToF) sensors that we’ve seen from other vendors out in the market for the last year.

A depth sensor can be used to make photos with Bokeh effect, or for various augmented reality (AR) applications, which enhances use cases for Apple’s professional tablets. 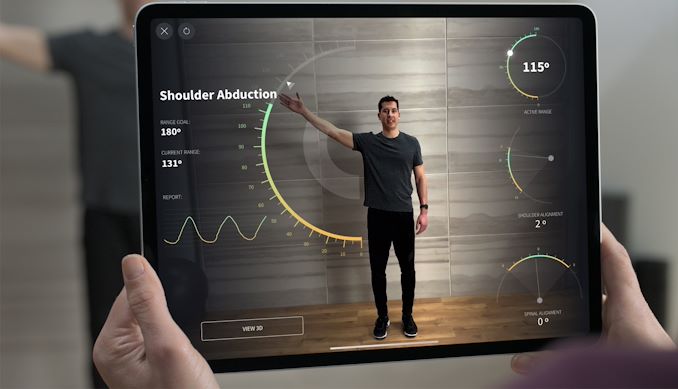 On the connectivity side of matters, the new iPad Pros feature a USB Type-C connector, a Wi-Fi 6 chip that supports transfer speeds up to 1.2 Gbps, Bluetooth 5.0, and an optional 4G/LTE modem that now supports up to 30 bands. Apple does not disclose which modem it uses, but it looks like it is going to offer some improvements when compared to the modem used for previous-generation professional tablets from the company. 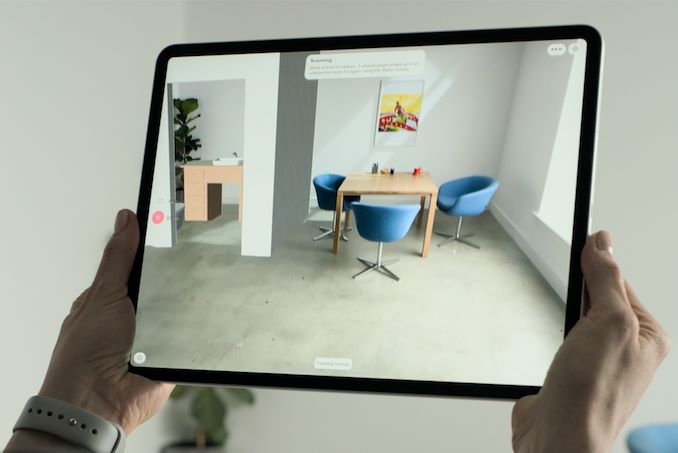 The fourth key enhancement that the new iPad Pro tablets have over predecessors is not a hardware advance, but rather an iPadOS 13.4 improvement. The new version of the operating system now supports keyboards with trackpads. Apple says that the cursor on iPadOS does not mimic its behavior on macOS, but is optimized for iPad’s realities. Meanwhile, multi-touch gestures are fully supported. The manufacturer says that the addition of a trackpad — which again brings the tablet closer to laptops — is meant to improve performance in applications that require typing, as now users will not have to take their hands off the keyboard to interact with UI. Apple claims that the trackpad works smoothly with existing applications for iPadOS, but developers can further adjust their products to take advantage of multi-touch gestures and other perks that trackpads provide. 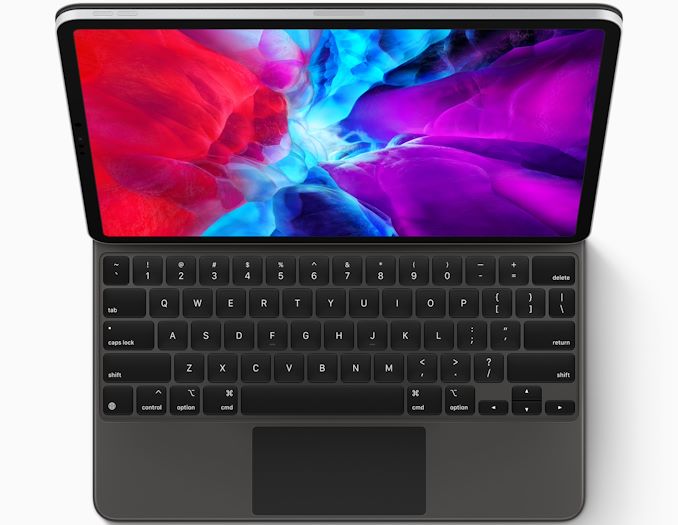 The first keyboard for iPad Pro to feature a trackpad is Apple’s own Magic Keyboard for iPad Pro. The unit features backlit keys with a scissor mechanism and a 1 mm travel distance. The keyboard attaches to the tablet magnetically and can be adjusted to a comfortable viewing angle when typing. The device even has charging capabilities with USB-C port to enable a passthrough charging, which allows to connect an external display or a storage device to tablet’s own USB-C interface. In addition to the latest iPad Pros, the new Magic Keyboards for 11-inch and 12.9-inch tablets are fully compatible with previous-generation iPad Pro 11 and iPad Pro 12.9 devices. 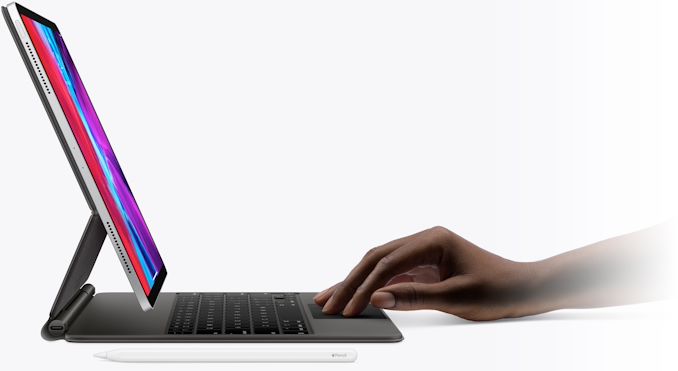 Other highlights of the new 2020 iPad Pro tablets include Face ID (enabled by a 7MP TrueDepth camera), compatibility with Apple Pencil, four speakers, five microphones, a three-axis gyro, an accelerometer, an ambient light sensor, and a barometer.

Now, time to talk about pricing of the new iPad Pro. Entry level Wi-Fi-only and Wi-Fi+LTE models now feature 128 GB of NAND flash storage, yet carry the same price tags as their predecessors: the cheapest iPad Pro 11-inch comes in at $799, whereas the cheapest iPad Pro 12.9-inch is $999. More advanced SKUs with 256 GB, 512 GB, or 1 TB of storage actually became more affordable than their direct predecessors, as some got $50 cheaper, whereas others lost a rather whopping $250, which will please users with significant storage requirements. The new units are available for pre-order at Apple.com and Apple Store app today with retail availability starting next week.

As far as the price of the Magic Keyboard for iPad Pro is concerned, the unit is going to cost $299 for the 11-inch model, $349 for the 12.9-inch model, and will start shipping this May. The addition of this keyboard to a decently configured iPad Pro naturally makes the whole package cost like an entry-level laptop, which, again, blends the difference between the iPad Pro and the MacBook Air.