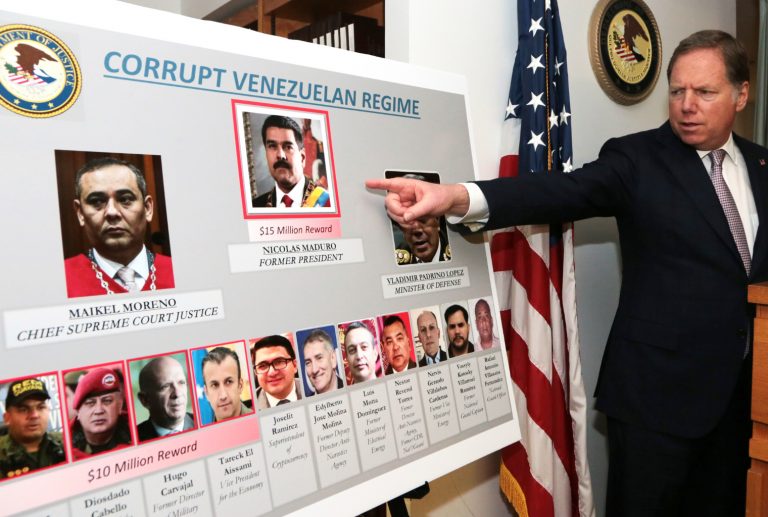 The U.S. has charged 14 high-ranking officials of the Venezuelan government, including President Nicolas Maduro, with “narco-terrorism, corruption, drug trafficking and other criminal charges.” The U.S. government is offering rewards of up to $15 million for any information leading to the arrest or conviction of Maduro.

Also read: 2x Bitcoin: Wanna Double Your BTC to the Moon? Forget About It

US Charges Maduro and Other Top Venezuelan Government Officials

The U.S. Department of Justice (DOJ) announced on Thursday that 14 high-ranking Venezuelan officials, including President Nicolas Maduro Moros, have been charged with “narco-terrorism, corruption, drug trafficking and other criminal charges.” They allegedly partnered with the Fuerzas Armadas Revolucionarias de Colombia (FARC), Colombia’s largest rebel group, to “flood” the U.S. with cocaine, according to the Justice Department.

For more than 20 years, Maduro and a number of high-ranking colleagues allegedly conspired with the FARC, causing tons of cocaine to enter and devastate American communities.

According to the allegations shown in the indictment, other court filings, and statements made during court proceedings, Maduro and several other officials have acted as leaders and managers of the Cártel de Los Soles since at least 1999. They allegedly facilitated the importation of tons of cocaine into the United States. Claiming that “Maduro very deliberately deployed cocaine as a weapon,” Attorney Geoffrey S. Berman affirmed that the government “will not allow these corrupt Venezuelan officials to use the U.S. banking system to move their illicit proceeds from South America nor further their criminal schemes.”

U.S. Attorney Ariana Fajardo Orshan claims that “Over the last decade, corrupt Venezuelan government officials have systematically looted Venezuela of billions of dollars.” They often used South Florida banks and real estate to conceal and perpetuate their illegal activity, she described. “As the recent charges show, Venezuelan corruption and money laundering in South Florida extends to even the highest levels of Venezuela’s judicial system,” the attorney elaborated.

A separate indictment unsealed on Thursday charges 33-year-old Joselit Ramirez Camacho, Venezuela’s Superintendent of Cryptocurrency (Sunacrip), with a series of crimes relating to efforts to evade sanctions. The indictment alleges that from February 2017 to March 2019, the superintendent worked with U.S. persons and U.S.-based entities to provide private flight services for the benefit of Maduro’s 2018 presidential campaign, in violation of the sanctions targeting Maduro. Sunacrip is Venezuela’s main regulator of cryptocurrencies, including the petro, the country’s national digital currency.

According to Thursday’s announcement by the Department of Justice:

The U.S. Department of State, through its Narcotics Rewards Program, is offering rewards of up to $15 million for information leading to the arrest and/or conviction of Maduro Moros.

What do you think of the U.S. indicting Maduro with all these crimes and offering rewards of up to $15 million for information leading to his arrest? Let us know in the comments section below.