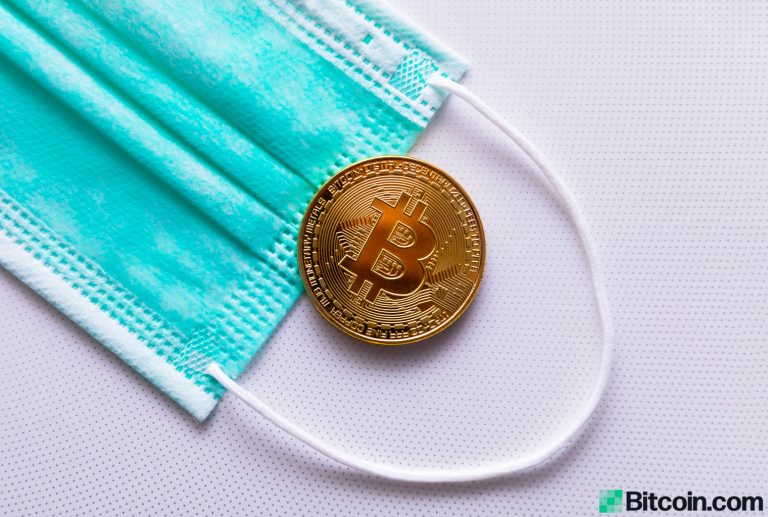 For well over a month now, a great number of countries have been living under lockdowns and stay-at-home orders due to the coronavirus outbreak. Meanwhile, central banks like the Fed, Bank of England (BoE), and European Central Bank (ECB) have funneled trillions into the hands of private financial incumbents. Despite the market carnage on March 12, cryptocurrency markets have gone against the trend and remain resilient. Bitcoin and digital currency trade volumes in the first quarter (Q1) of 2020 have outshined Q1 2019’s volumes by 61%.

The coronavirus scare has ravaged the global economy by touching every continent on the planet. The covid-19 virus can lead to severe illness and even death as it has caused the nation state’s politicians to shut down the economy. Bureaucrats have forced the citizenry to stay-at-home with specific lockdown mandates. Bureaucratic leaders have also shut down major industries including services like hotels, restaurants, airlines, cruises, and more. Essentially, depending on your jurisdiction, a shelter-in-place (lockdown) order means residents are asked to stay home and not leave their residence to travel unless it’s an emergency.

All of these actions have caused the stock market to crumble, real estate markets shudder, and oil has dropped below $20 per barrel of crude. Just like bitcoin and cryptocurrency markets, on ‘Black Thursday’ March 12, gold took a big hit and dropped to a low of $1,579 per Troy ounce. Since then, gold has gained 5.3% in value to-date, as an ounce of fine gold is selling for $1,661 at press time. BTC dropped to a low of $3,800 on March 12, but prices have since gained 90.78% in value. Even though the global economy has been stumbling, digital assets have surpassed equity and precious metals markets by a long shot.

Exchanges reported that ‘Black Thursday’ saw a record $70 billion in global trade volume, as trading platforms were swamped with both buyers and sellers. Bitcoin options skyrocketed to a record $198 million that day as well as crypto derivatives, specifically options and futures, had a landmark month. Chicago Mercantile Exchange (CME) swapped $347 million worth of bitcoin futures contracts on April 2. Moreover, the derivatives exchange Bitmex has lost dominance to other futures market players like Okex, Huobi, and Binance.

The Block’s Steven Zheng reviewed the volumes of 22 major crypto exchanges and discovered a considerable spike in Q1 2020 compared to 2019’s first quarter. Zheng’s statistics indicate that trade volumes jumped to over $154 billion in Q1 2020, which was a 61% increase compared to Q1 2019. Despite the rising volumes, some analysts think that the crypto trade volumes need to continue increasing or adverse trends will crush optimism. 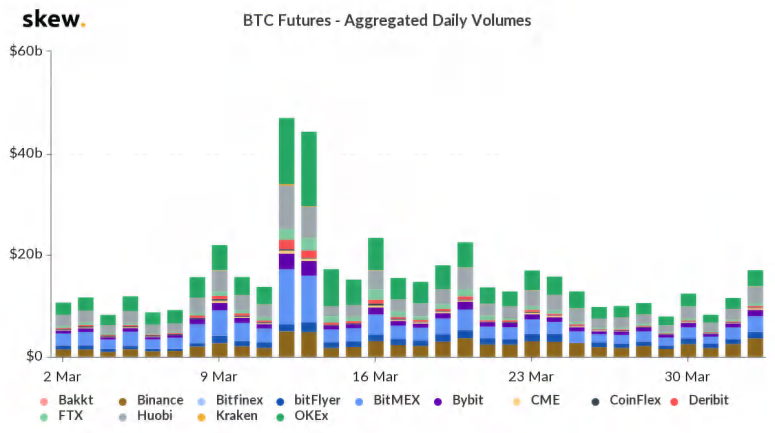 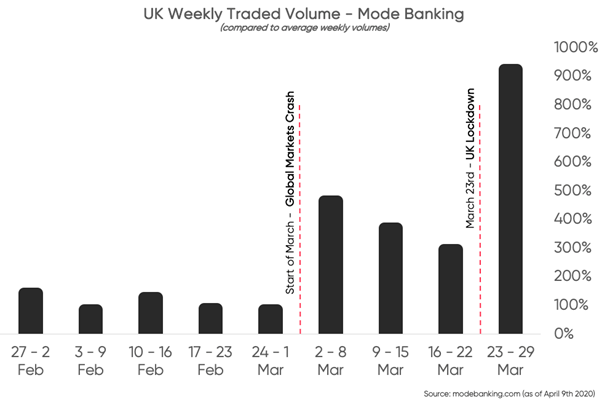 The London fintech firm Mode Banking’s cryptocurrency application saw a 1,000% increase in trade volume at the end of March. Mode detailed that the week after the United Kingdom was placed on official lockdown, the Mode app saw a massive spike in crypto trading activity. 90% of the trades were buyers and most of Mode’s user base stems from the U.K. Mode Banking attributes the massive crypto buying to the coronavirus and stimulus packages being funneled to private banks.

“The impact of Coronavirus aid packages and monetary stimulus programs,” Mode wrote on April 9. “Trillions of dollars have been pumped into economies and stock markets around the world. This has been causing longer-term concerns about the U.S. dollar and other currencies becoming debased, and inflation rising.” Mode further stated:

The nature of Bitcoin means that quantitative easing and other monetary measures do not directly affect its price and thus it can be used to hedge against the impact of these on fiat currencies.

At the time of publication, the crypto economy is hovering around the $210 billion zone and there’s roughly $25 billion worth of global crypto trades right now. Most of the top 20 coins are relatively stable but cryptos like tezos, bitcoinsv, chainlink, and bitcoin gold have seen decent gains on Thursday. A number of lesser-known digital assets are doing well like bora, ethlend, acute angle cloud, hdac, and swftcoin. Overall traders and enthusiasts are positive about the market holding up during all the lockdowns and stimulus injections.

Moreover, people will see even more inflation when countries like Spain, Canada, and the U.S. toss out helicopter money to the citizenry. On Wednesday, Treasury Secretary Steve Mnuchin told U.S. politicians from the House of Representatives that around 60 million Americans will get their stimulus check next week if they used the IRS direct deposit system. Although, Mnuchin recently admitted that those who did not register with direct deposit would not get a check until late August.

What do you think about crypto prices and volumes going against the grain? Let us know in the comments section below.