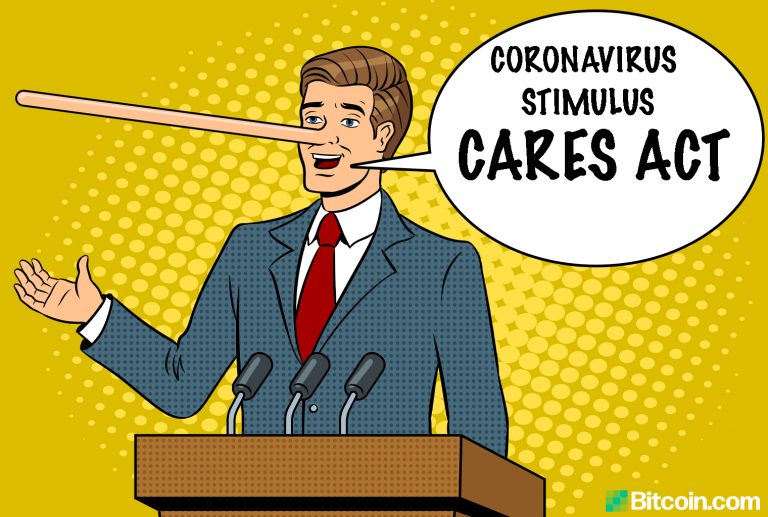 Last week thousands of Americans have been reporting that they received their stimulus check, while many people have been having issues with the system. Moreover, the Coronavirus Aid, Relief & Economic Security (CARES) Act has not been able to cover everyone and the Small Business Administration’s (SBA) coronavirus relief program was recently drained in minutes. American bureaucrats made the section flexible enough to allow much larger businesses and wealthy individuals to reap the SBA’s designated funds for covid-19 relief.

The CARES Act: ‘A Massive Wealth Transfer from the Middle Class to the Moneyed Class’

As soon as the CARES Act passed through the Senate, Kentucky Representative Thomas Massie told the public the bills passing was a blatant “cover up.” People who actually read the newly enacted law can quickly find that the relief act is loaded with pork funds, corporate bailouts and Special Purpose Vehicles (SPVs) for Federal Reserve’s risky schemes. As more time passes, people have found significant amounts of manipulation within the stimulus plan and Massie has once again called out the collusion between politicians and corporatists. Massie recently stated:

The tragedy of this bill is it’s a massive wealth transfer from the middle class to the moneyed class.

Americans witnessed the stimulus being distributed unfairly last week when the Small Business Administration’s (SBA) coronavirus relief program was drained by banks, investment managers, private clubs, and law firms in a matter of minutes. Headlines detailed that “big banks” were involved with botching the SBA relief program that was meant for much smaller companies. “The rules for qualifying for the loans, though, were so loose that the program was opened up to many businesses and people who were not the intended recipients, which is one of the reasons the program hit its ceiling so fast,” one report noted.

In addition to the manipulated SBA program, it has been discovered that the CARES stimulus is making it so the coronavirus victim count in the U.S. can’t be trusted.

The commentator and political activist, Candace Owens, mentioned how hospitals are being incentivized by the cash injections from the government. “Every time a hospital admits, discharges, or loses a patient to Covid-19, they are compensated 15% more according to the CARES ACT, SEC 4409,” Owens tweeted to President Donald Trump on April 14. Owens further added:

NYC was facing a hospital budget crisis and you (Trump) fixed it for them. They are inflating all of their coronavirus numbers.

Mega Banks Repatriate Stimulus from Debtors – 43,000 Millionaires to Get $1.6M in Tax Rebates

Meanwhile, the complaints concerning banks taking people’s stimulus checks if they own certain debts, continues to heat up. “Certain banks are confiscating customers’ stimulus money to put toward negative account balances (which can swell quickly with overdraft fees) — ⁦USAA⁩ is doing this,” the New York Times banking columnist Emily Flitter recently tweeted. Further, it’s been discovered that while most Americans will get a $1,200 check from the Treasury, 43,000 U.S.-based millionaires will get $1.6 million each in tax rebates from the helicopter money.

For years now freedom lovers and believers in sound money theory have warned of the catastrophic effects of the central planner’s monetary schemes. What’s worse is the coronavirus corporatist bailouts are being done with no secrecy and all one has to do is simply read the CARES Act’s pages to find fraud. The manipulated monetary system has caused many people worldwide to leverage precious metals, barter and trade, and cryptocurrencies in order to advance their economic freedom. Satoshi Nakamoto created the Bitcoin network in spite of the central bank’s disastrous ‘bust and boom’ economies and created a fair and predictable electronic cash system. As for the latest U.S. stimulus plan, ironically one man is in charge of overseeing $2.2 trillion in relief spending. Meanwhile, a great number of Americans have been protesting the U.S. lawmakers who have shut down the economy and there has been a myriad of “end the lockdown” demonstrations in various states across the nation.

What do you think about the stimulus bills hidden manipulation? Let us know in the comments below.