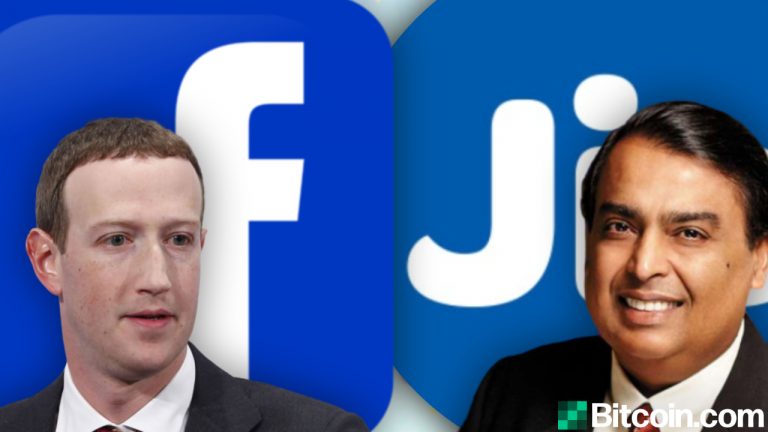 Facebook is buying a stake in Reliance Jio, India’s largest telecom operator. The deal has boosted Reliance Industries’ share price and is welcomed by the Indian cryptocurrency community. Besides Facebook’s investment into Reliance Jio, Whatsapp has also entered into a partnership with Jio Platforms and Reliance Retail.

Reliance Jio’s valuation is approximately “$65.95 billion, assuming a conversion rate of ₹70 to a US dollar,” the company’s announcement adds. The deal between Reliance Jio and Facebook costs the social media giant approximately 5.7 billion dollars or 435.74 billion rupees at the current exchange rate.

The deal with Facebook has boosted the share price of Reliance Jio’s parent company, Reliance Industries. Its stock was up 10.30% to Rs 1,363.35 on the BSE stock exchange on Wednesday following the news of Facebook’s investment.

Reliance Jio, a wholly owned subsidiary of Reliance Industries, currently has about 388 million subscribers. According to local media, it became the biggest telecom operator in the country by subscriber base early this year. India is the largest market for Facebook and its mobile messaging platform, Whatsapp. In India, Facebook has approximately 328 million monthly users and Whatsapp has more than 400 million users.

Commenting on why Facebook decided to invest in Reliance Jio, CEO Mark Zuckerburg said: “This is especially important right now because small businesses are the core of every economy and they need our support. India has more than 60 million small businesses and millions of people rely on them for jobs.”

“The partnership between Facebook and Jio is unprecedented in many ways. This is the largest investment for a minority stake by a technology company anywhere in the world and the largest FDI in the technology sector in India,” Reliance Jio described. Mukesh Ambani, chairman and managing director of Reliance Industries and India’s richest man, said in a statement:

ln the post-corona era, I am confident of India’s economic recovery and resurgence in the shortest period of time. The partnership will surely make an important contribution to this transformation.

In the very near future, Jiomart — Jio’s digital new commerce platform, and Whatsapp — will empower nearly 3 crore [30 million] small Indian Kirana shops to digitally transact with every customer in their neighborhood. This means all of you can order and get faster delivery of day-to-day items, from nearby local shops.

Facebook detailed that it will work with Reliance Jio to create new ways for people in India and businesses to work more effectively, especially in the face of the covid-19 crisis.

“In the face of the coronavirus, it is important that we both combat this global pandemic now, and lay the groundwork to help people and businesses in the years to come,” the social media giant emphasized. “For instance, by bringing together Jiomart, Jio’s small business initiative, with the power of Whatsapp, we can enable people to connect with businesses, shop and ultimately purchase products in a seamless mobile experience.”

Impact on the Indian Cryptocurrency Sector

The cryptocurrency community in India is upbeat about the deal between Facebook and Reliance Jio. Last year, Reliance Jio announced its plan to build the largest blockchain network in India. Local regulatory news and analysis outlet Crypto Kanoon broke down what Facebook buying a stake in Reliance Jio means for the Indian crypto sector. Voicing concerns over privacy issues, the news outlet pointed out that the Reliance Jio and Facebook deal is not a joint venture and the two companies will continue to operate independently with their own business models.

Nonetheless, the partnership between Reliance Jio and Facebook “will have a spillover effect” on cryptocurrency as more people in India will start experimenting with digital assets, Crypto Kanoon noted. “There is also going to be [a] surge in the search for terms like ‘blockchain’ and ‘bitcoin.’” Furthermore, the news platform added that having a local partner could help Facebook navigate “various regulatory issues, including those related to privacy and local storage,” asserting:

You can expect FB-JIO lobbying for favorable regulation. In future, you can expect a regulation in favor of centralized digital assets regulated by RBI.

“You might see groceries getting delivered from ‘Gupta General Store’ of your locality in the near future,” the news platform added, noting that 30 million “Kirana shops in India start accepting digital payments, possibly a ‘Jiocoin.’”

The Indian cryptocurrency space recently got a boost when the supreme court quashed the banking ban by the central bank, the Reserve Bank of India (RBI). Since then, the crypto sector has been growing and attracting investments from abroad despite the global coronavirus pandemic and the nationwide lockdown. Meanwhile, Facebook’s Libra project has undergone a major change.

Are you happy about the deal between Reliance Jio and Facebook? Let us know in the comments section below.

The post Facebook Buys Stake in Reliance Jio — How the Deal Affects Cryptocurrency in India appeared first on Bitcoin News.