Intel Reports Q1 2020 Earnings: Another Strong Quarter For Both Client and Datacenter

Kicking off earnings season for the tech industry, Intel yesterday evening reported their financial results for the first quarter of the year. And, like pretty much every Intel quarter for the last couple of years, it was a doozy, with Intel once again recording growing revenues and a very healthy profit margin.

For the first quarter of 2020, Intel reported $19.8B in revenue, a significant improvement over the year-ago quarter, and only slightly behind Intel’s record-breaking Q4. As a result of this strong revenue, income was also very healthy for the company, with Intel recording $5.7B in net income, a 43% jump over Q1’19. Meanwhile gross margins were up 4 percentage points to 60.6%, pushing Intel back above their much revered 60% gross margin threshold.

Breaking things down on a group basis, many of Intel’s internal reporting groups saw double-digit growth over the year-ago quarter. Client computing revenue was up 14% to $9.8B, and data center revenue was an even bigger winner with $7.0B in revenue, a 43% jump over the previous year. The significant growth in the data center segment comes as Intel saw both higher average selling prices and higher volumes overall, with ASPs and volumes growing by 13% and 27% respectively. Overall Intel attributes the data center gains to the company’s “broad strength” in the market, though they did note that they’ve seen a 53% year-over-year increase in revenue from cloud service providers.

As for client computing revenue, the biggest gains there came from notebook ASPs, which were up 22% over the year-ago quarter. Other client metrics were relatively tame; notebook volumes actually slipped 3%, while on the desktop, ASPs were up 4% while volumes were down 4%. For Intel’s client group, the company is coming off of the second quarter of selling Ice Lake laptops, with improving supply and improving helping to drive those numbers. As well, Intel’s new Comet Lake-H CPUs were recently launched, which means those would have been shipping to OEMs in Q1 as well.

Rounding out Intel’s product portfolio, the company recorded smaller gains for their Programable Solutions Group, as well as their Internet of Things business. Overall IoT was a mixed bag: Mobileye revenue, which the company offers a separate breakout, was up 22% over the previous year, but the rest of Intel’s IoT business saw a 3% drop in revenue. Finally, Intel’s storage group was a surprising winner, with record revenue pushing them to year-over-year growth of 46%, thanks to higher NAND ASPs and lower unit costs. 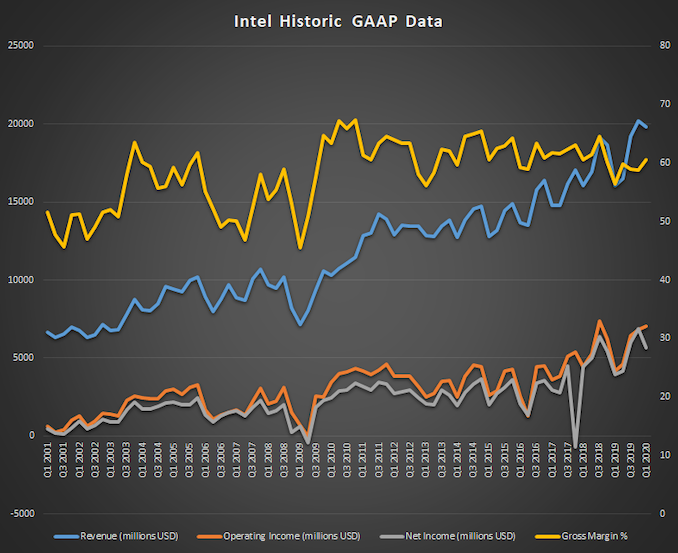 Meanwhile, like most other tech companies, the 800lb gorilla of the chipmaking world finds itself in an interesting position as the novel coronavirus pandemic has shuttered large parts of the world’s economies. For Q1, Intel believes they actually benefitted somewhat from the outbreak, as companies and consumers needed to make previously-unplanned purchased of laptops and other equipment for working from home and remote learning. However as the pandemic continues, it’s likely to start impacting Intel’s sales in other ways, as idled business won’t be making their usual purchases and expansions. As a result, Intel isn’t even providing full-year financial guidance due to the economic uncertainty that the pandemic has caused.

On the flip side of the coin, as a business and employer themselves, the coronavirus outbreak has also threatened Intel’s manufacturing operations. Despite that, according to Intel the company was able to keep all of its essential manufacturing operations going, with an on-time delivery rate that’s still better than 90%.  So thus far Intel seems to have weathered the first part of the pandemic fairly well.

All eyes then will be on the second quarter, both for continuing developments with the coronavirus pandemic, as well as Intel’s own internal manufacturing efforts. With Intel set to start shipping its 10nm Tiger Lake CPUs to OEMs by mid-year, the company is going to be pushing its 10nm manufacturing lines harder than ever as they ramp up for a new generation of CPUs. While slowly improving, 10nm’s rocky bring-up remains a bit of a proverbial albatross around Intel’s neck, so further improving capacity and yields will go a long way towards helping Intel maintain its success, especially in light of heavy competition from AMD.