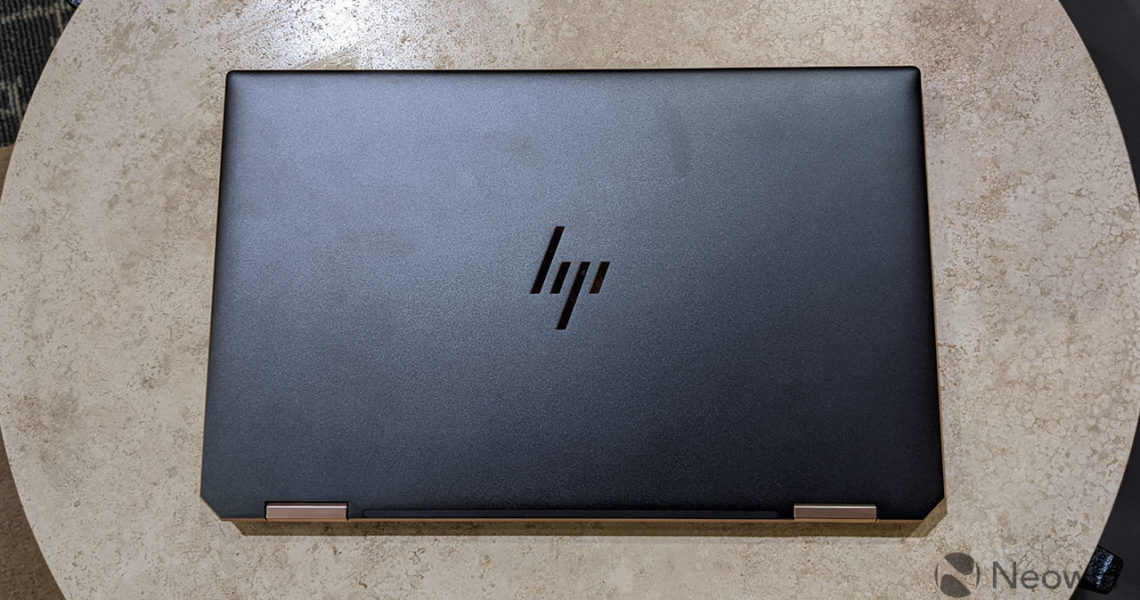 HP’s Spectre x360 has always been one of the sexiest Windows 10 laptops on the market. After several iterations, I actually called it the sexiest convertible that exists last year. Incredibly, HP’s flagship laptop keeps getting better.

The biggest change is that HP shrunk down the bezels, and the smaller footprint makes it more similar to Dell’s XPS 13 lineup. However, it keeps an IR camera for Windows Hello, something that Dell omitted when it moved the webcam to the top of the screen.

It still has its two-tone color with angled edges, which sets it apart from the pack. This year though, there’s an option for a 4K OLED display, which in my opinion, puts the Spectre x360 13 over the top as the best laptop on the market.

Last year, I praised HP for killing off the Natural Silver option on the Spectre x360. After all, who needs it? There are enough silver aluminum laptops on the market. The Spectre x360 is above that.

As it turns out, I was dead wrong. This year, Natural Silver is back, and HP actually brought it back by popular demand. No matter how sexy Poseiden Blue and Dark Ash Silver was, there are still people that want Natural Silver.

It’s still the sexiest laptop on the planet. The model that HP sent me is a color called Nightfall Black, which is pretty much a rebranded Dark Ash Silver. And frankly, there was never anything silver about this, so the new name makes sense.

The Nightfall Black color comes with copper accents, and that includes the border around the trackpad, the frame around the edges of the PC, the hinge, and the HP logo on the lid. If you want a laptop that will turn some heads, this is absolutely it.

It comes in a much smaller footprint than previous generations, with HP chopping down the top and bottom bezels. It’s a lot more similar to Dell’s XPS 13; in fact, it’s even smaller. The Spectre x360 has a surface area of 595.17 square centimeters, while the XPS 13 is 600.98 square centimeters. The XPS 13 2-in-1 is even larger than that, although to be fair, it actually has a larger screen. 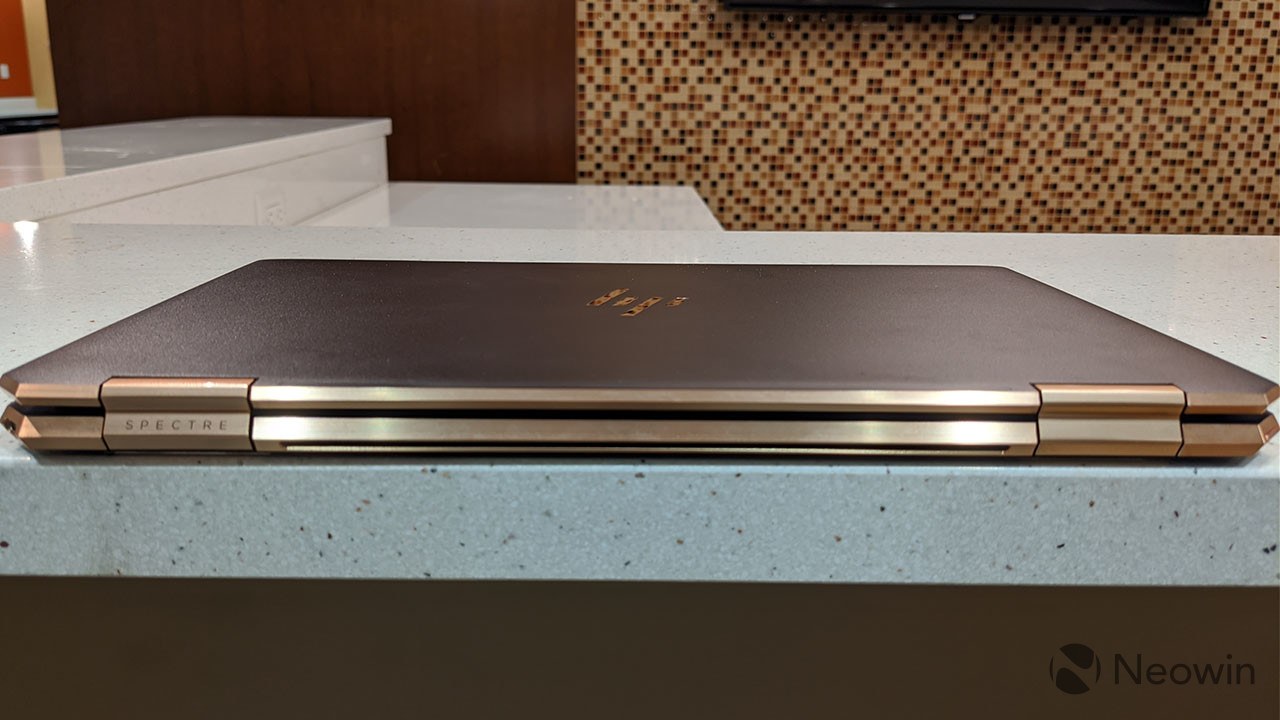 It still has the angled edges that we’ve seen in recent years. While the Nightfall Black one has copper accents, the Poseiden Blue one has silver edges. In my opinion, both colors are equally sexy. 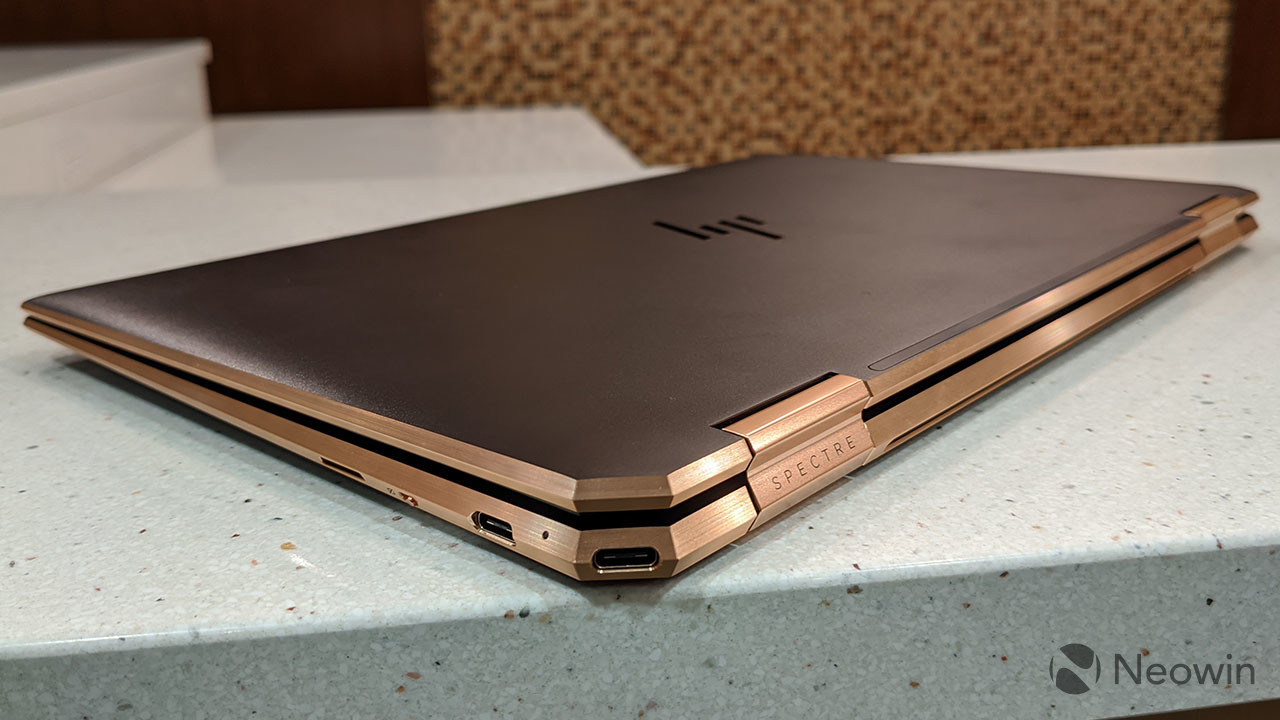 The Spectre x360 13 has two Thunderbolt 3 ports, one of which is located on the flattened corner. It’s actually a pretty cool idea. When you plug the cable in the corner port, you can easily fold back the display over it to use as a tablet. At the same time, the cable doesn’t get in the way if you’re charging the PC while using it. 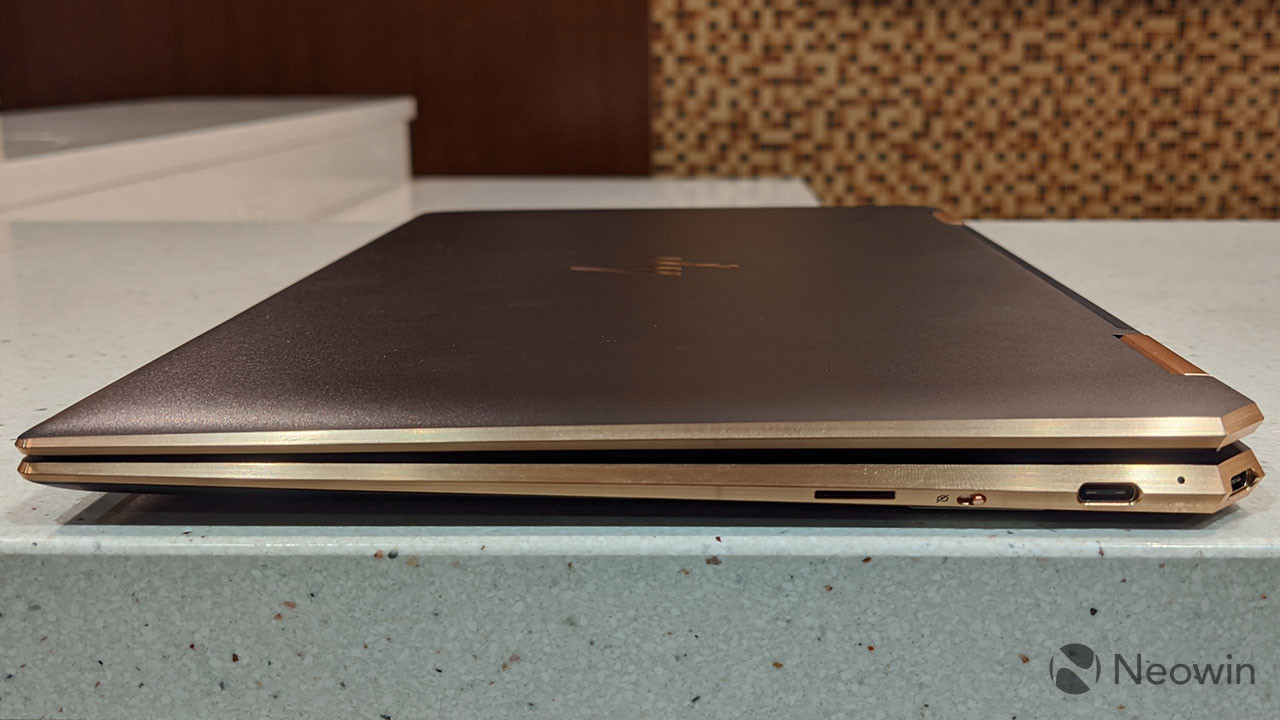 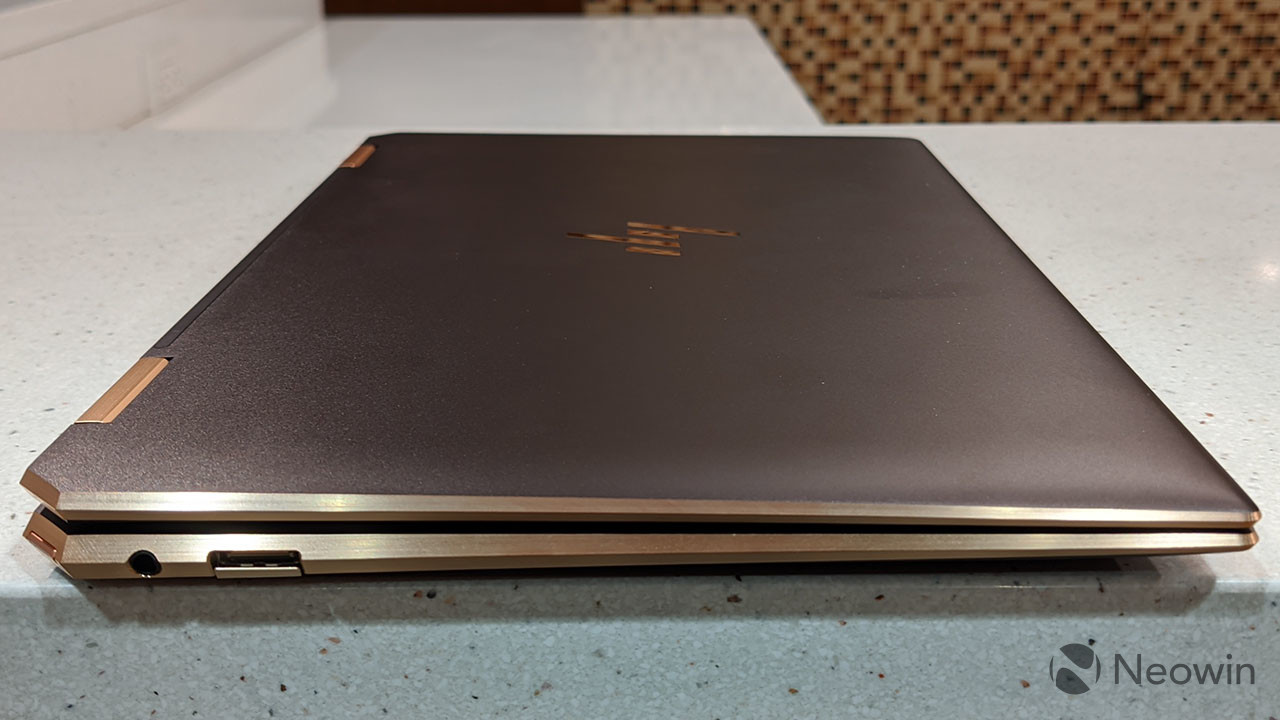 On the left side, there’s a 3.5mm combo audio jack, and a USB 3.1 Gen 1 Type-A port. The USB port uses a dropjaw hinge, and supports 5Gbps data transfer speeds, unlike the 40Gbps USB Type-C ports. 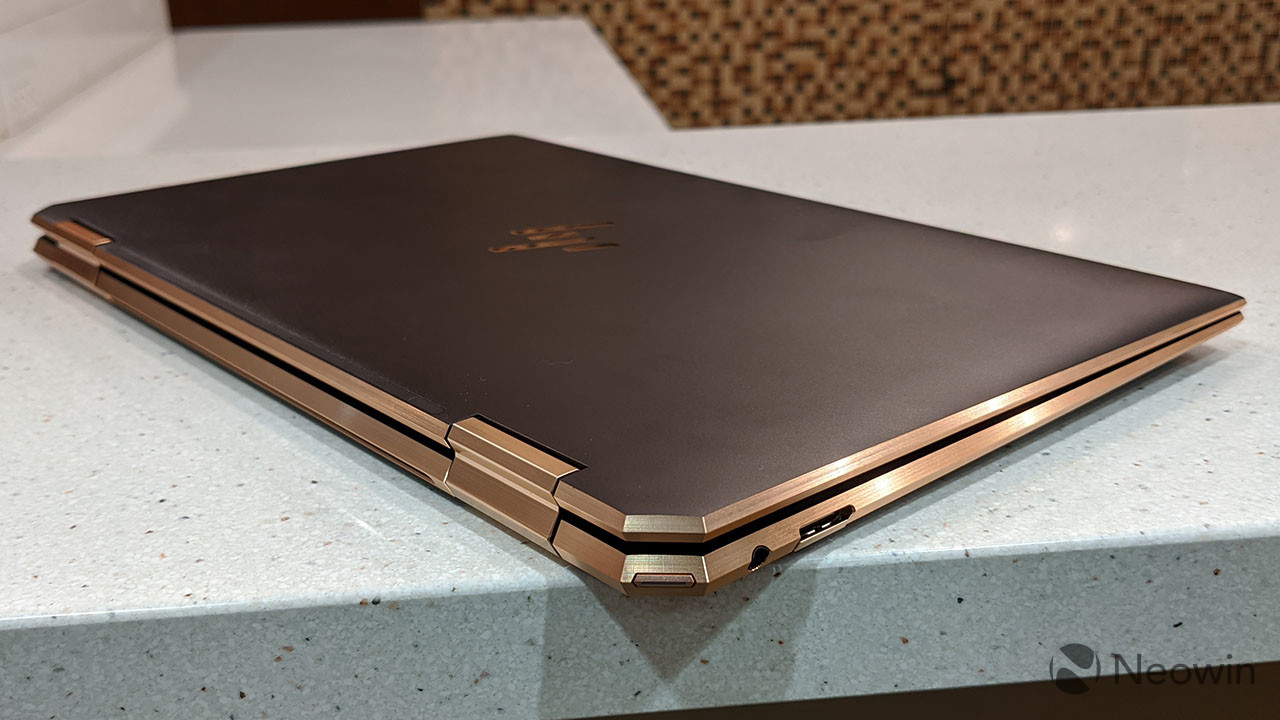 There’s a power button on the other corner, in case you were wondering where that was. One thing that I miss about older Spectre x360 models is that HP used to include a physical volume rocker, which was great for tablet use.

HP actually first offered to send me the Spectre x360 13 over a month ago alongside of the Elite Dragonfly, but at the time, it was only seeding the 1080p model. I opted to wait for the 4K OLED model, and I’m sure glad I did. This thing is absolutely beautiful, and it makes for a pleasant experience. 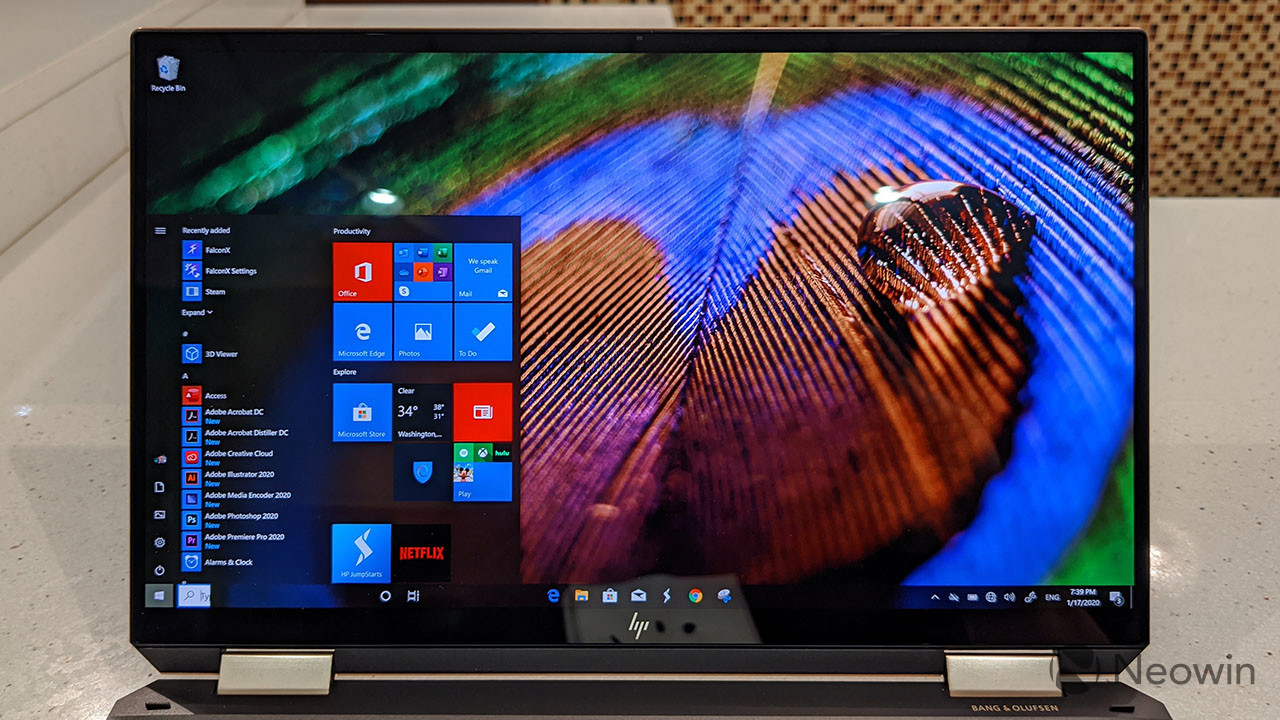 But HP actually did some extra work with the OLED screen that makes it a bit more interesting. Here’s the thing about OLED. Pixels can be turned off, allowing for true blacks, and colors rendered on top of that tend to be more vibrant. This all adds up to the prettiest screens around, but pretty doesn’t equal accurate. Yes, it’s a pleasant experience, but if your work depends on having accurate colors, OLED isn’t a sure bet. 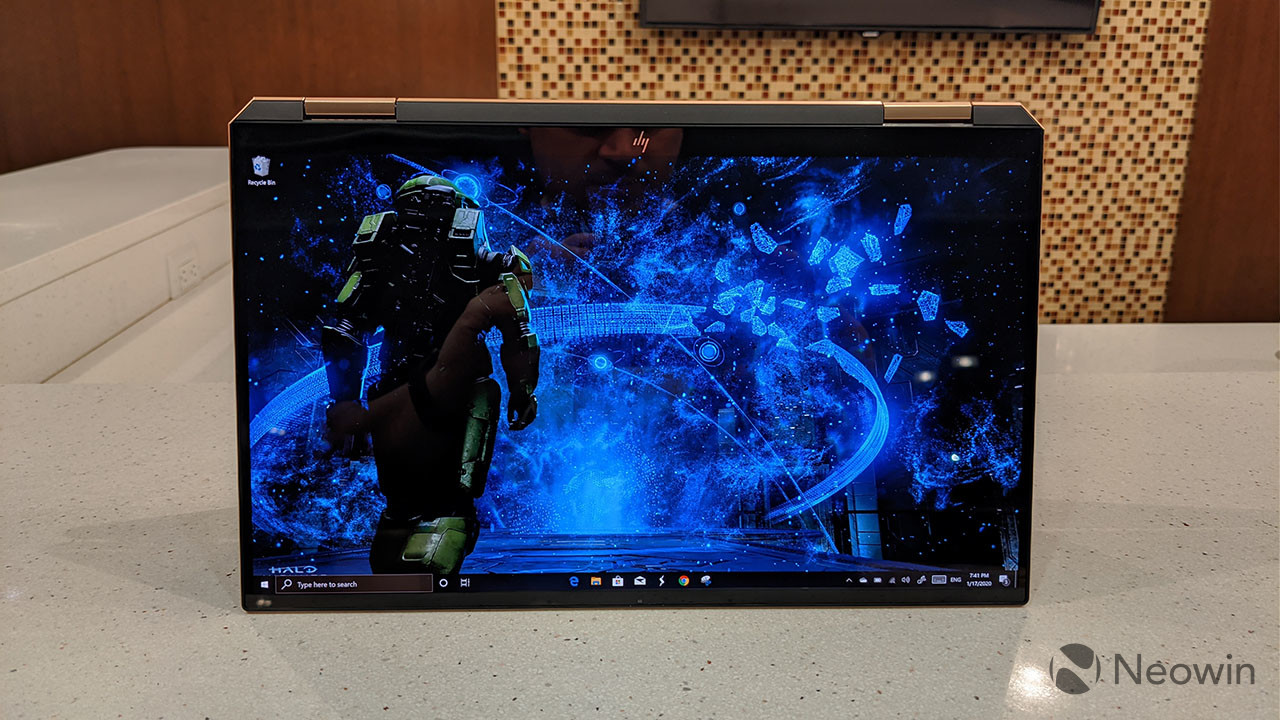 As usual, there are two other options for the display. You can get it in the low-power 1080p variant, which is what you’ll want if you want the best battery life. There’s also the FHD Sure View option, which includes HP’s privacy screen that prevents people from looking over your shoulder.

Of course, there’s also pen support, being that this is a convertible. Oddly enough, there’s still no way to actually store the pen with the PC, which is kind of a pain. Like previous models, it comes with a sleeve, and the sleeve comes with a slot for the pen. 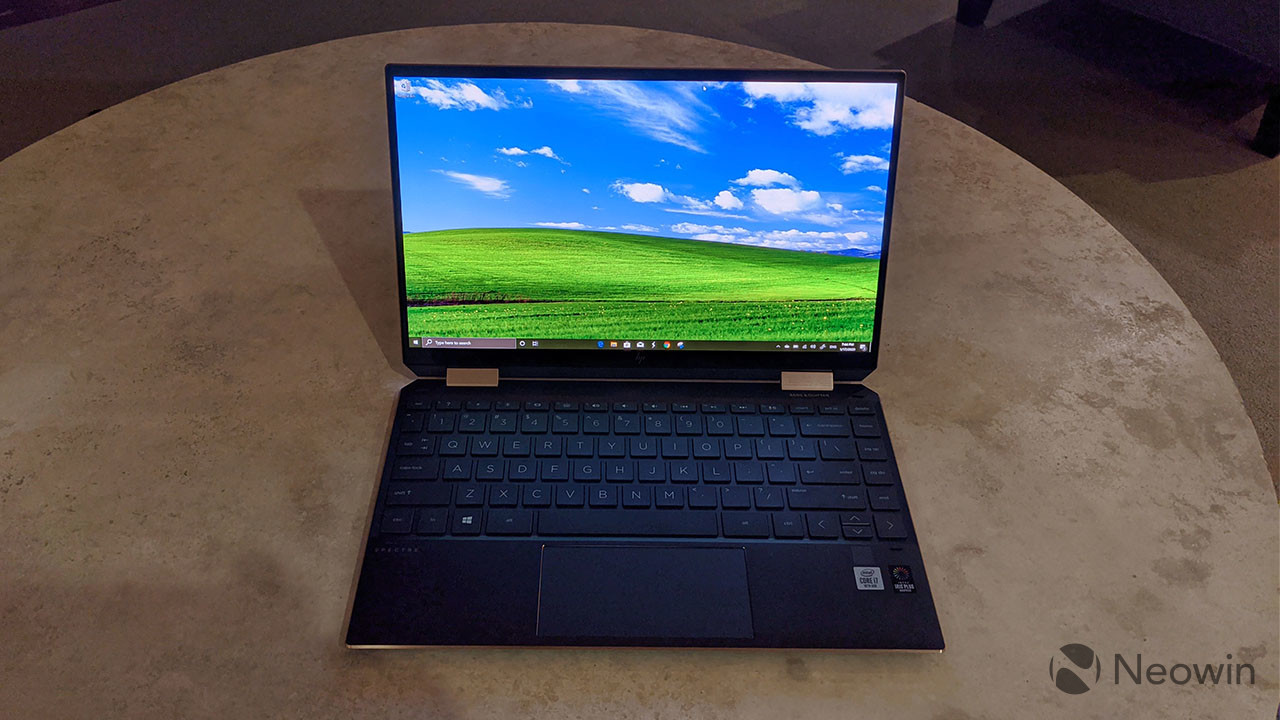 HP shrunk down the bezels this time around, so gone are the unsightly top and bottom bezels. The company didn’t make the common sacrifices though. It shrunk down the webcam to keep it on top of the screen, and it even shrunk down the IR camera to keep it there. All of that adds up to what’s probably the smallest footprint on a 13-inch laptop.

HP moved the speakers to the bottom of the laptop. Previously, the Bang & Olufsen speakers were placed above the top of the keyboard, but there isn’t room for them anymore. Sadly, this means that the speakers don’t get quite as loud as they did in previous models. It’s still pretty impressive in terms of volume and clarity though, as HP’s partnership B&O always provides a solid experience.

With the same beautiful design language as last year, a tiny footprint, and a new 4K OLED display, it’s easy to get lost in all of that great stuff and forget about what was absolutely the worst part of the Spectre x360 in previous years. Yes, the trackpad finally uses Microsoft Precision drivers. That means that the performance is great, and it supports the things that you’re used to. It means that HP has caught up with the rest of the market in terms of trackpads. 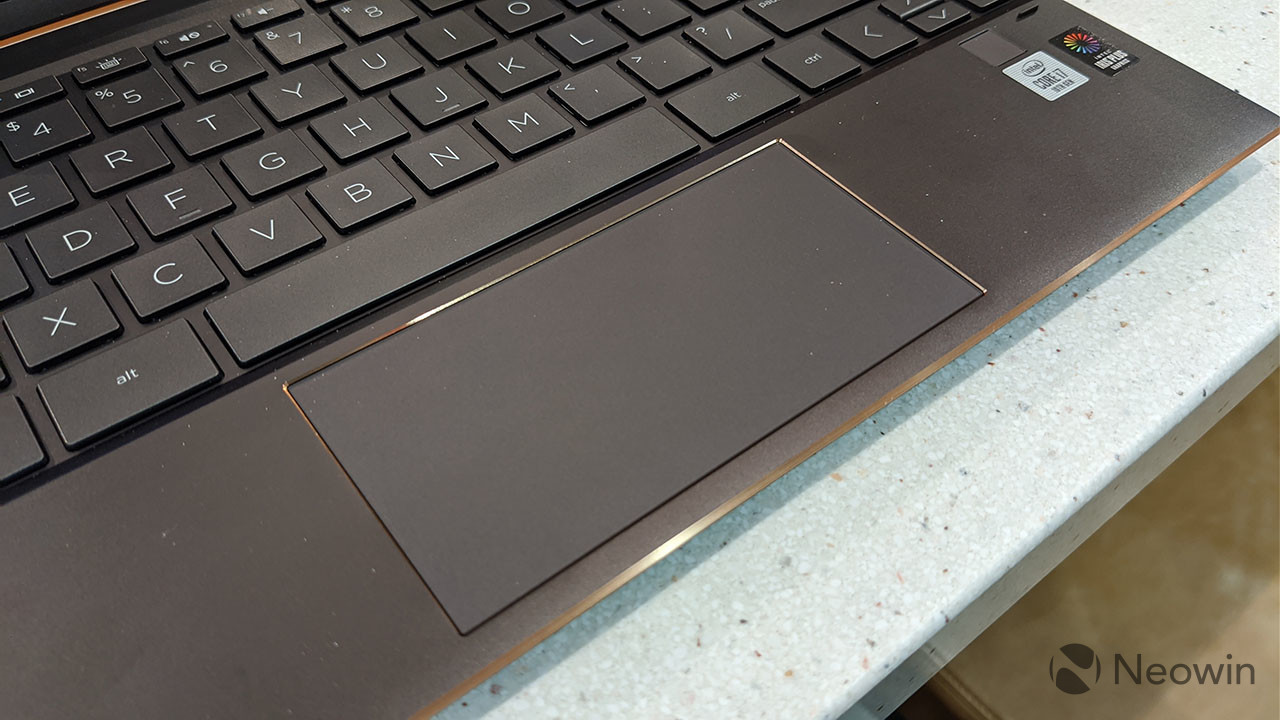 Obviously, the trackpad is smaller this year, since it’s in a smaller chassis. It feels a bit weird that it’s as wide as it is, and I do prefer a larger trackpad, but I haven’t found myself lacking in any way. 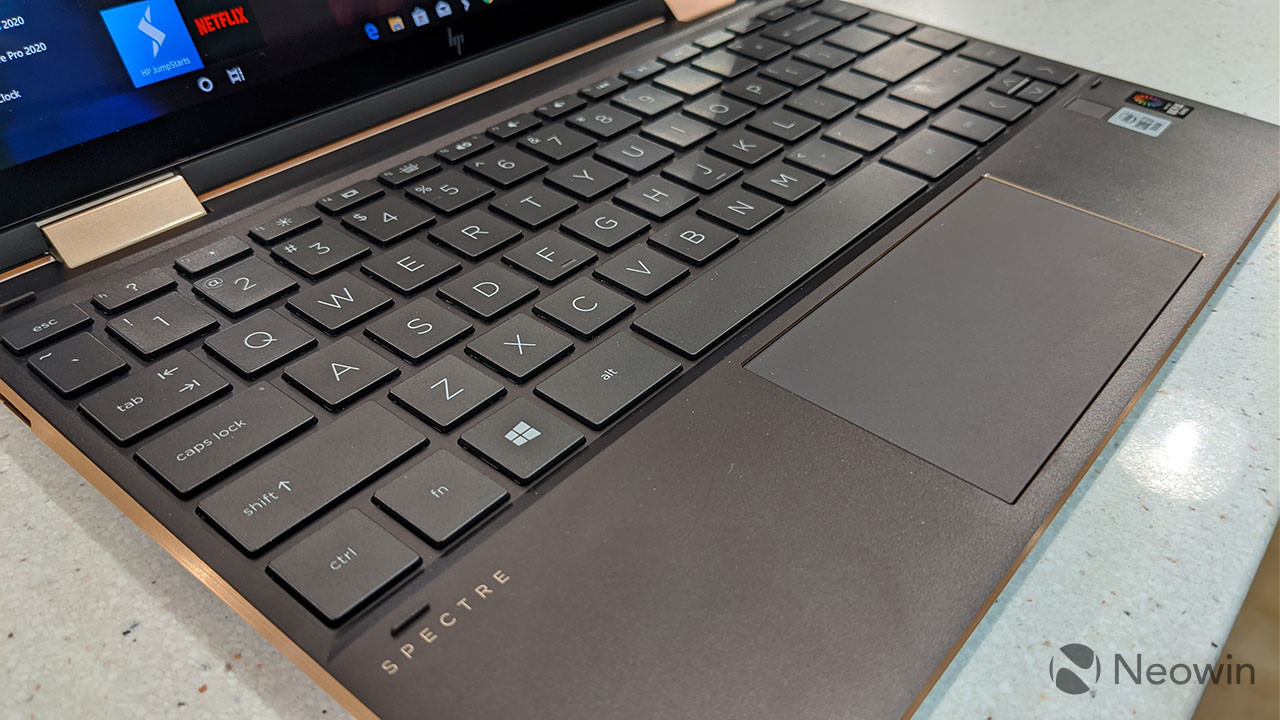 I know that I usually start with the keyboard, but HP could have refreshed this thing with just the Precision trackpad and I’d have celebrated it.

The backlit keyboard hasn’t changed much. It’s still one of the better consumer keyboards on the market, with a key travel of around a millimeter. For the most part, it’s accurate and comfortable, although the unit that HP sent me gets stuck with the H key. It’s a strange issue to have, as I have to hit the key a bit harder than the rest of them when I type. 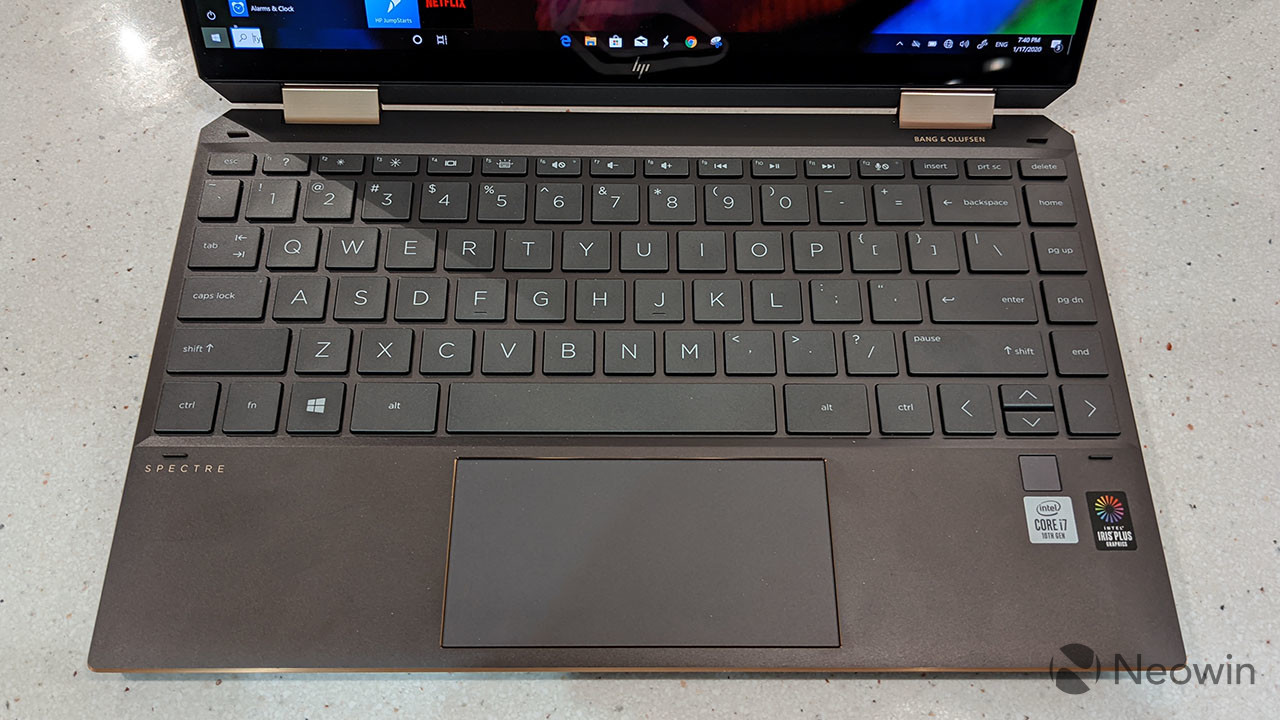 That wasn’t a deal-breaker though. If it was a real issue, I would have given up on typing with this PC a while ago.

I do wish that HP would use the same keyboard that it includes in its Elite 1000 laptops. Those things have the best keyboards on the market, and I wish the Elite team would work more closely with the Spectre team.

This year’s HP Spectre x360 13 includes Intel’s 10th-generation ‘Ice Lake’ processors, which include Iris Plus Graphics. This isn’t to be confused with Comet Lake, which is also branded as 10th-generation but it’s still 14nm and has UHD Graphics.

Ice Lake is fantastic, as I’ve noted in several reviews already. The extra graphics power that you get from Iris Plus makes me feel a lot more comfortable with carrying a PC that doesn’t have dedicated graphics. I used it to edit some video in Premiere Pro, edit photos in Photoshop, and more. It’s so much better than the standard UHD and HD Graphics that we’ve seen in most U-series processors for years. 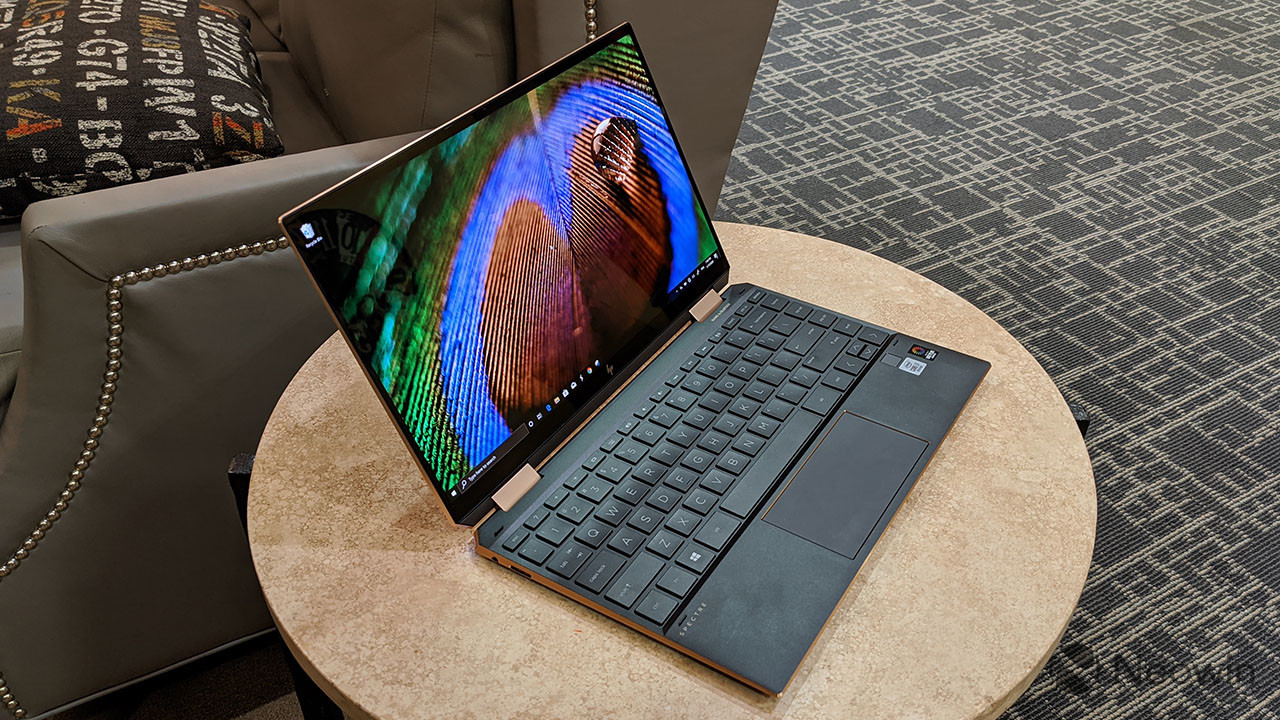 Battery life is pretty solid as well. As I mentioned earlier, you’ll want to go for the 1080p model for the best battery life; that’s just common sense. In fact, HP says that you can get up to 22 hours of battery life with that model. Of course, having four times as many pixels on the screen uses power, and having an OLED screen uses more power as well.

At the worst, I got about four hours; that’s with the battery setting at full power, the screen turned to full brightness, and regular working conditions. If you turn the brightness to medium levels and set the battery to a more balanced level, you can easily double that. There are a lot of customizations that you can set here, and you can pretty easily get the battery life over 10 hours if you need to.

For benchmarks, I used PCMark 8 and PCMark 10.

These results only beat out last year’s Whiskey Lake Spectre x360 on the Creative and PCMark 10 tests. Indeed, the CPU without Iris Plus was more powerful with Whiskey Lake, since Intel had to lower the clock speed to get down to 10nm. Still, I’d take Ice Lake any day of the week.

Prior to HP sending me the Spectre x360 13, I called the Dell XPS 13 2-in-1 the best laptop on the market. After all, Intel Ice Lake is legit, and packing a high-end 13-inch PC into a tiny footprint makes it super-portable. 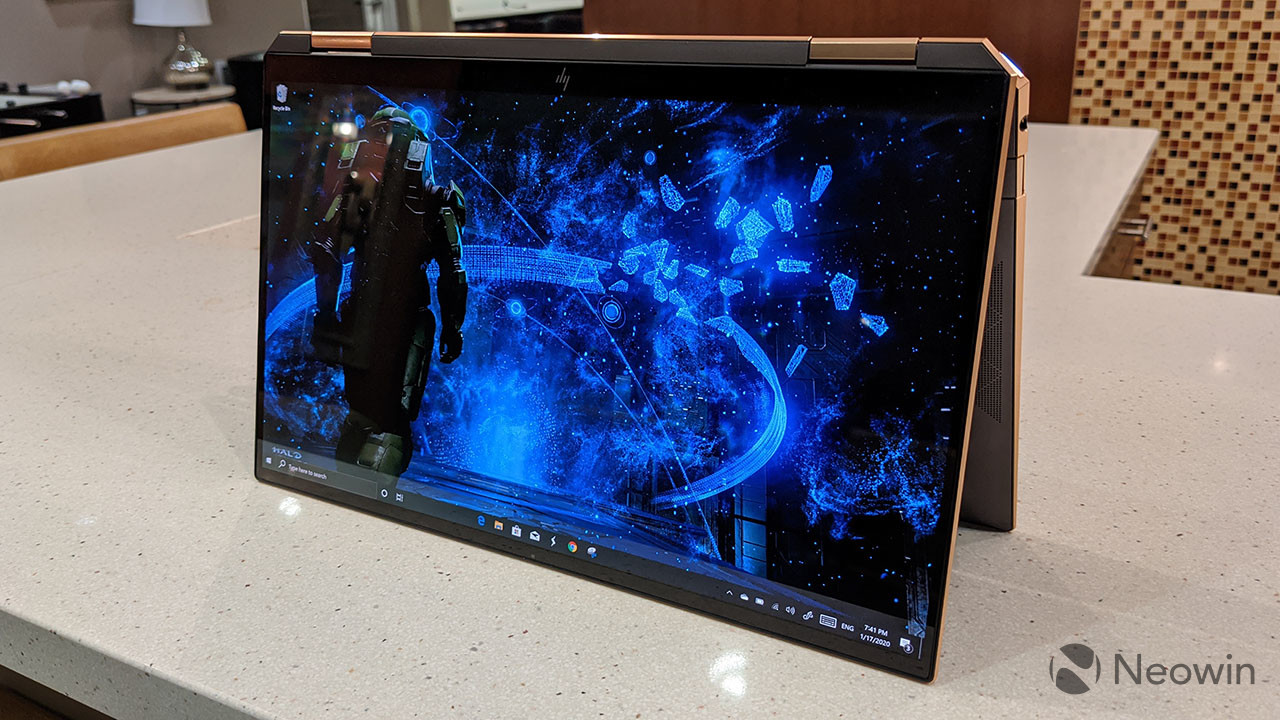 But the Spectre x360 just wins. It’s got an even smaller footprint, a sexier design, and a 4K OLED display. There’s also an option for gigabit 4G LTE, which wasn’t included in the model that HP sent me, unfortunately.

The only real pain point is that there’s no magnet to attach the pen to the side. If you don’t want to carry the sleeve with you, you’ll have to carry the pen in your pocket, which is annoying.

But other than that, it’s the perfect laptop. This is a design that’s going to turn heads, and it has the best display on a 13-inch laptop. Also, $1,800 isn’t a bad price at all considering what you get. If you’re looking for an ultrabook to buy, I definitely think that this is it.