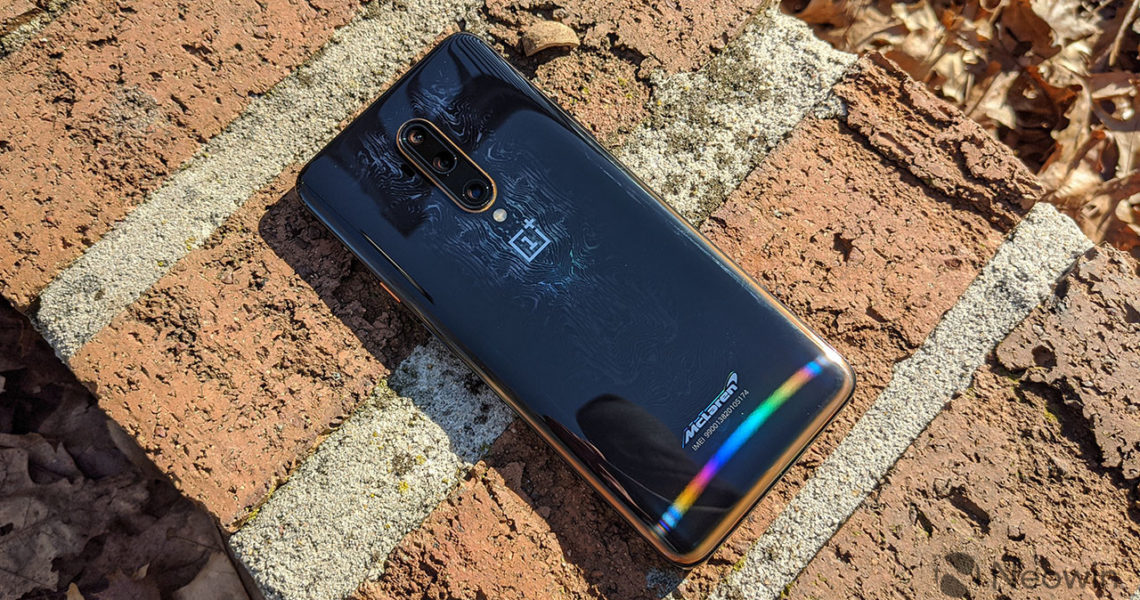 When OnePlus announced the 7T Pro back in October, it wasn’t supposed to come to the U.S. It was a big disappointment too, since the OnePlus 7 Pro was easily one of the best smartphones of the year. But when T-Mobile launched its nationwide 5G network this month, it did it with the OnePlus 7T Pro 5G McLaren.

I was able to obtain a unit from T-Mobile while I was at Qualcomm’s Snapdragon Technology Summit. The intention was to test out not only the device itself, but also T-Mobile’s 5G network. Both of those things absolutely delivered; however, we’ll get into T-Mobile’s 5G, how 5G works, and managing expectations later on.

The OnePlus 7T Pro 5G McLaren has a stunning design, and internally, it packs a Snapdragon 855+ processor with a Snapdragon X55 5G modem and 12GB RAM. It includes the famous 1440p 90Hz AMOLED display that was on the OnePlus 7 Pro, and a whole lot more.

One other item I found hidden in the box was a case. What’s cool is that it isn’t the typical cheap plastic case that phones come with. This is a premium Alcantara case.

While it’s a mouthful to say, the OnePlus 7T Pro 5G McLaren is one of the most beautiful and unique devices on the market. The device is a glass sandwich with a metal frame, like many phones, but there’s a lot more to it.

OnePlus has typically used the color red for themes. Most of the company’s devices come with red power cables, in red boxes, and so on. With the 7T Pro 5G McLaren, it’s all about Papaya Orange, and it’s a nice change of pace. The color looks fantastic.

Aside from the McLaren design, this device looks almost identical to the OnePlus 7 Pro from earlier this year. That’s no surprise though, since the T-series is something of an iteration on the main one. The non-Pro model is the one that has a significant design change. Perhaps now that OnePlus is doing two phones at a time, it’s planning to redesign the Pro in the spring and the non-Pro in the autumn. 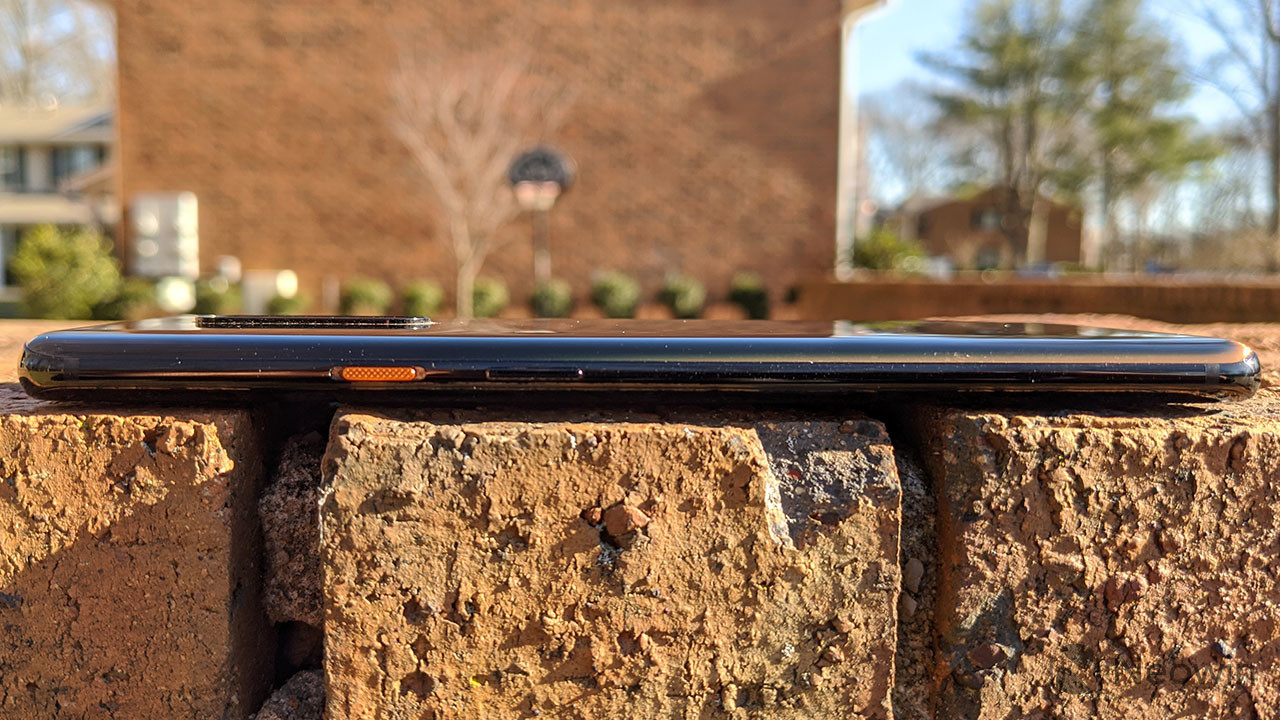 On the right side of the device, there’s a power button and a switch for silencing notifications. There are three settings on the switch, one to keep your ringer on, one to silence your phone, and one to put it on vibrate. To my knowledge, Apple is the only other OEM that includes such a switch, and I think it’s a super-useful feature. I’m glad OnePlus adopted it. 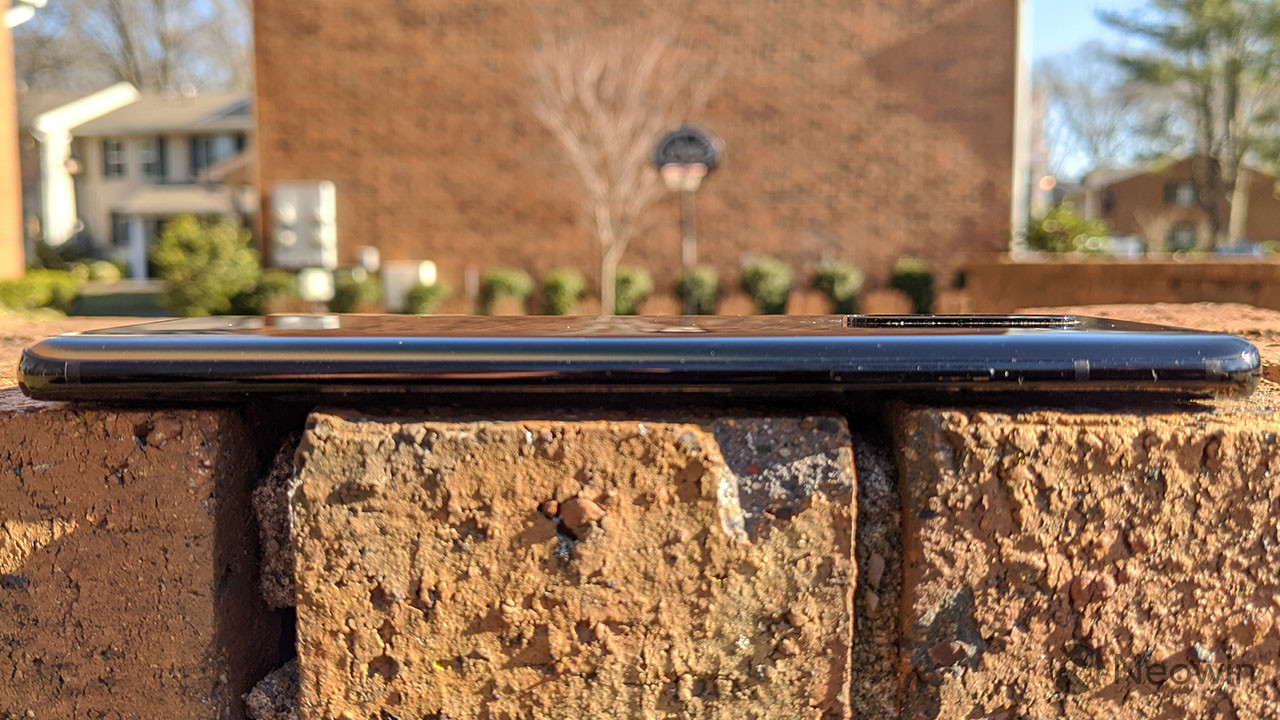 The left side off the device is where you’ll find the volume rocker. 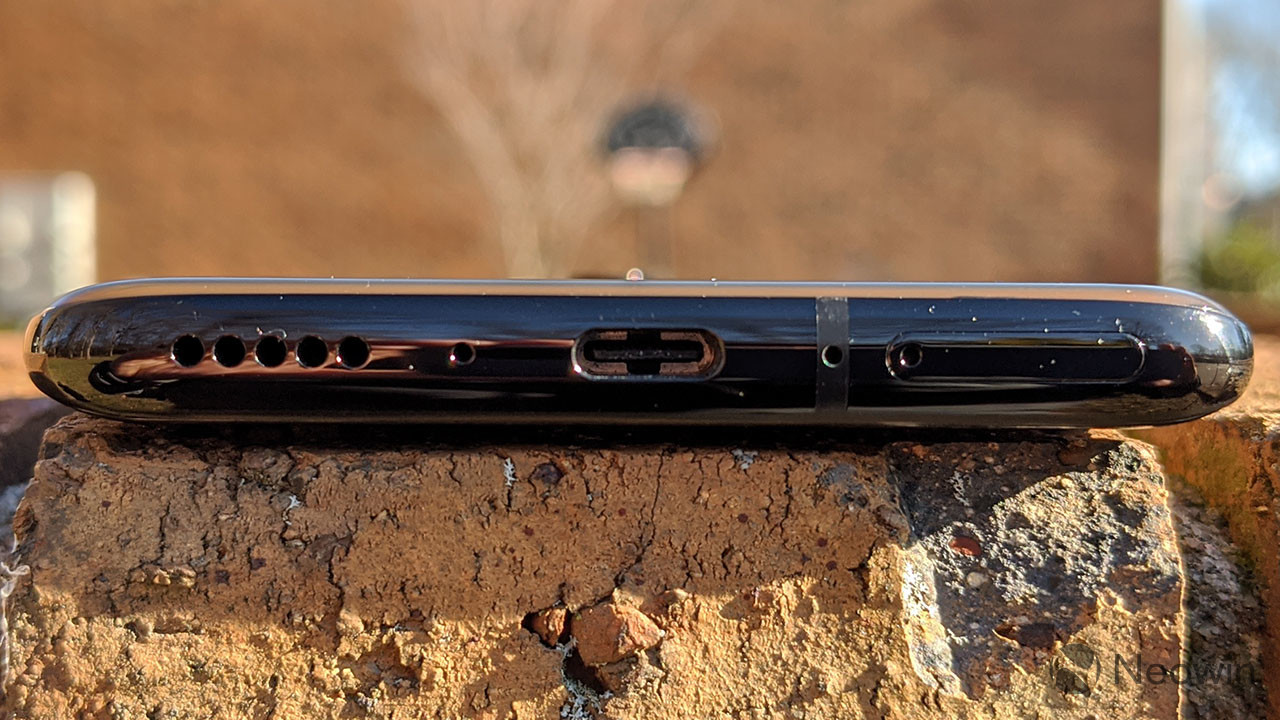 On the bottom, there’s a USB Type-C port for charging and a speaker grille, along with the nano-SIM slot. The OnePlus 7T Pro 5G McLaren supports Warp Charge 30T 30W charging, which is even faster than Warp Charge 30. Unffortunately, it doesn’t support USB Power Delivery, meaning that a different 30W charger won’t get you the same charging speed.

There’s also no wireless charging, which is a real shame for a flagship phone in 2019. 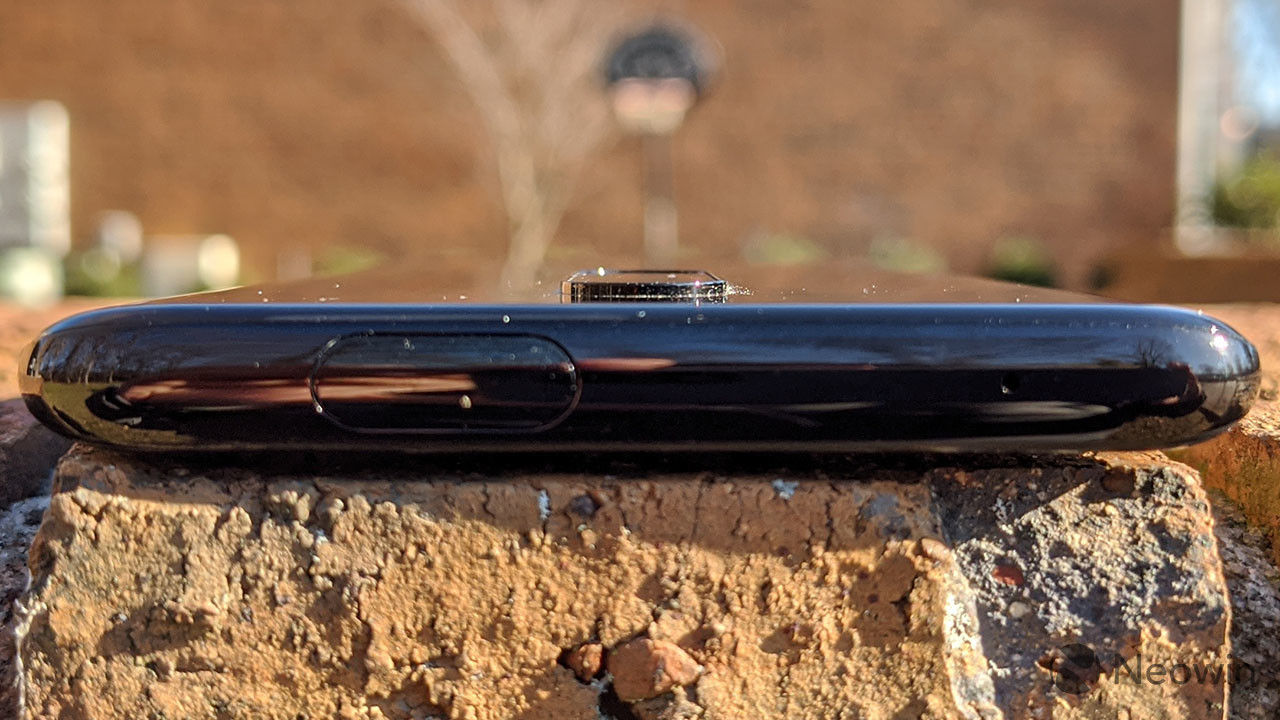 Finally, on the top of the device, you’ll find the pop-up front-facing camera.

The OnePlus 7T Pro 5G McLaren has a 6.67-inch QHD+ Fluid AMOLED display, the ‘Fluid’ meaning that it has a 90Hz refresh rate. It’s absolutely beautiful, and it’s my favorite screen on any smartphone that I’ve used. The same goes for the OnePlus 7 Pro from earlier this year, of course. This is the feature that puts the OnePlus 2019 lineup over the top. 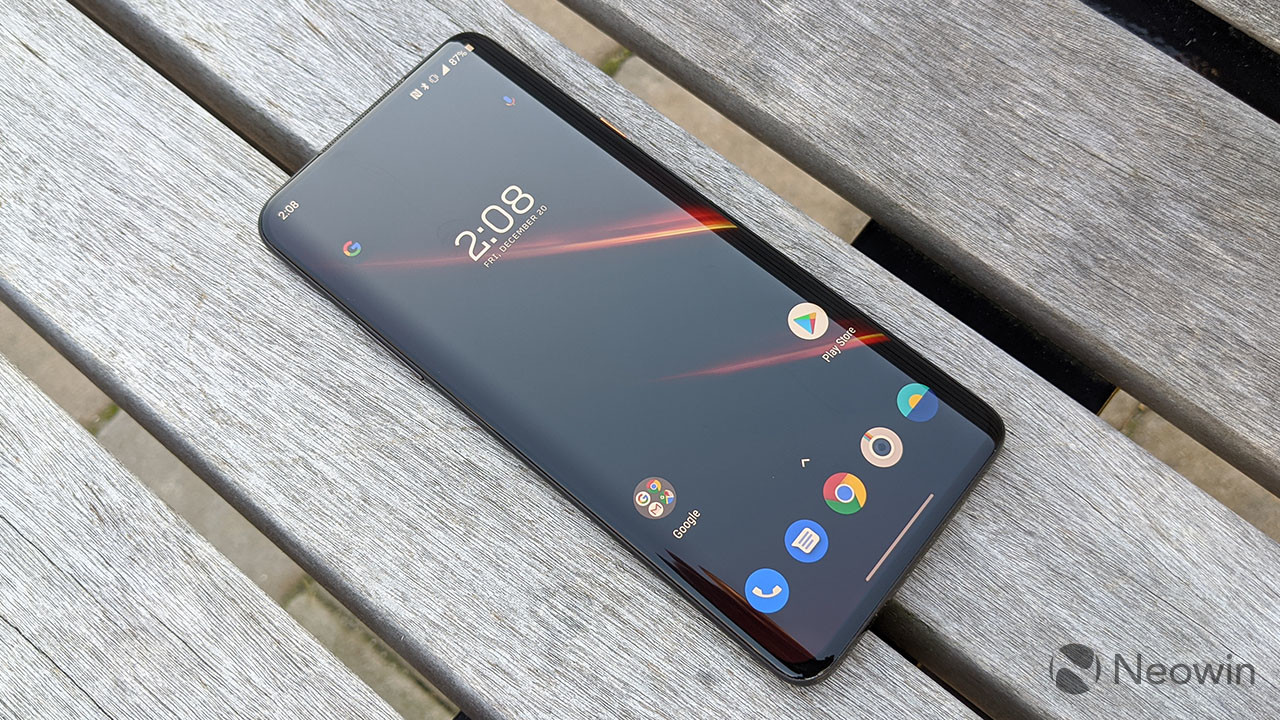 A normal smartphone display has a 60Hz refresh rate, with a few exceptions. 90Hz means that it’s smoother, and it’s noticeable in everyday use. Aside from that, it’s AMOLED, so you get true blacks and vibrant colors. Companies like Razer do make phones with a 120Hz refresh rate, but it’s an IPS LCD.

The screen is curved on the sides, one thing that I do find annoying. I’m not a fan of curved edges, as they just make the phone harder to use. I’ll take a flat display any day. 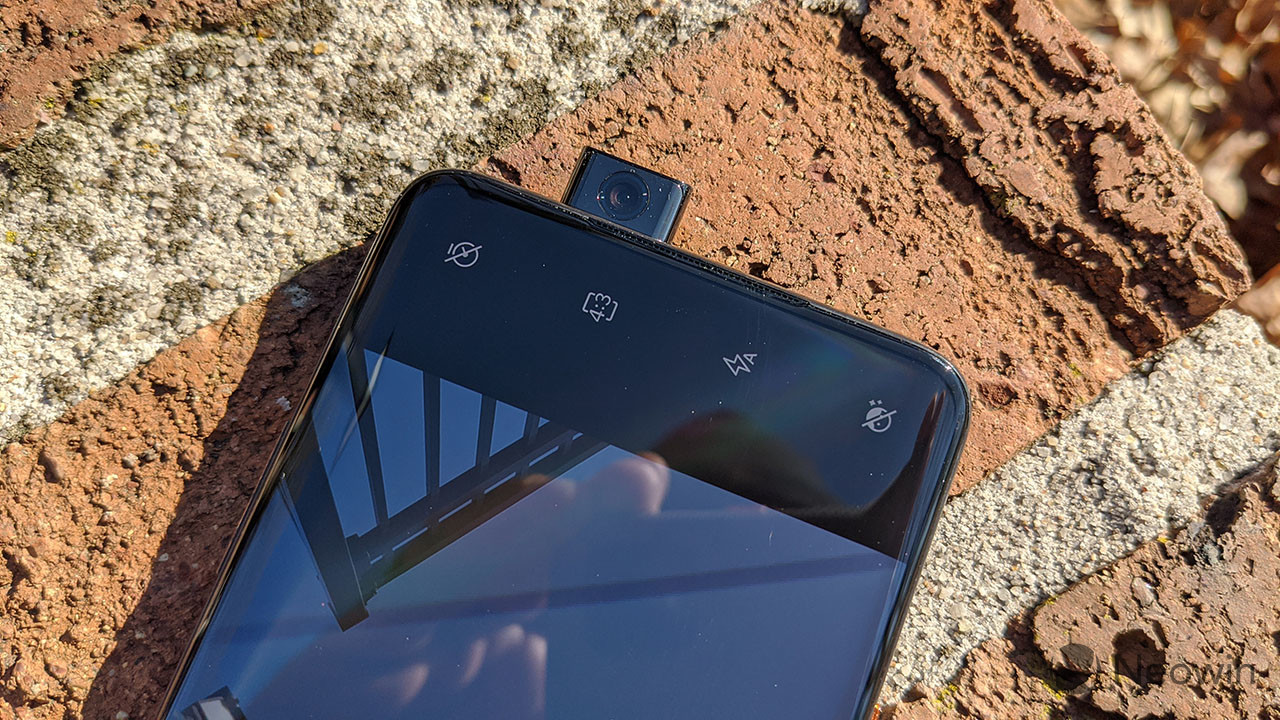 What is cool is that there’s no notch. This is thanks to the pop-up selfie camera, which rises and falls as fast as you need it to. By that, I mean that it pops up as fast as it would take to switch to the front camera on any other phone. 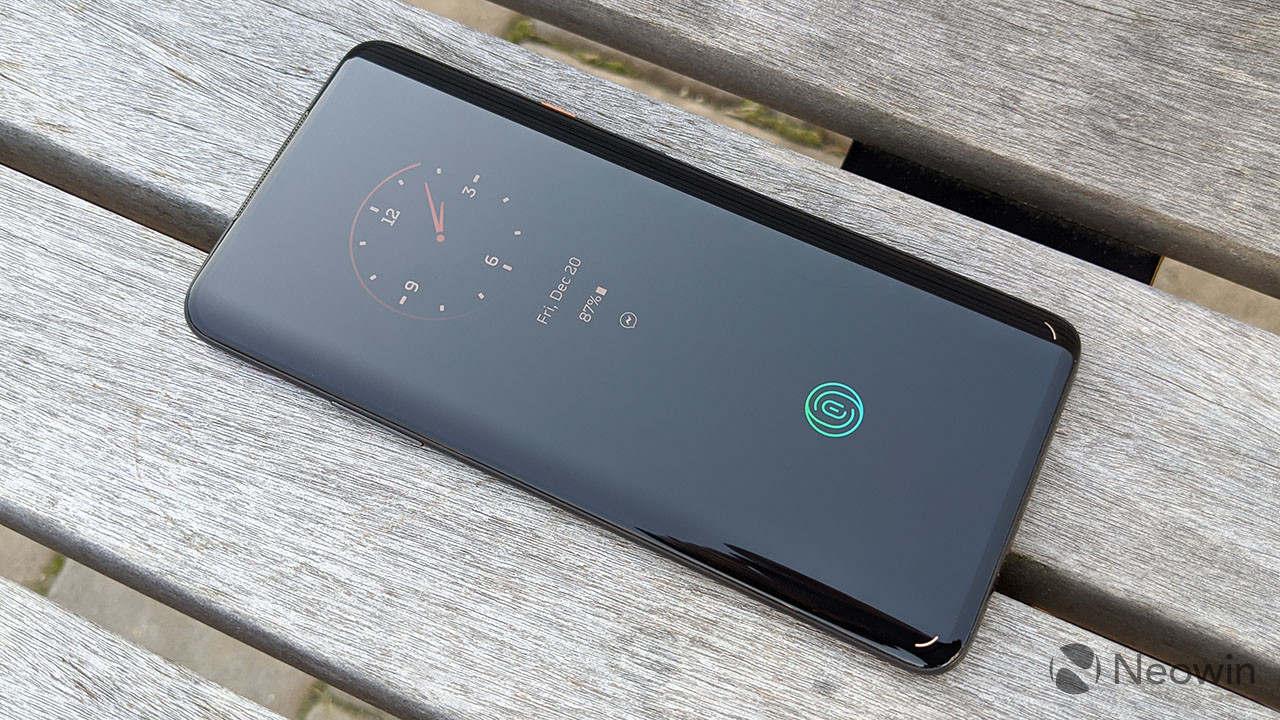 The always-on display is pretty cool too. When a notification comes in, there’s an orange outline that lights up around the display. It’s those little effects that make this phone fun.

And of course, there’s an in-display fingerprint sensor. I said this back when I reviewed the OnePlus 7 Pro, and I’ll say it again. This might be the best in-display fingerprint sensor on the market. While the technology has gotten better across the board, in most cases, a dedicated sensor is still faster and more accurate. That’s not the case with the OnePlus 7T Pro 5G McLaren though. This thing is as fast and accurate as anything.

T-Mobile’s new nationwide 5G network uses its 600MHz frequency, and the Un-carrier is promising 20% faster speeds than 4G LTE. In almost every test that I ran, this was conservative. Most tests that I ran side-by-side with a 4G LTE phone showed at least a 50% increase. And to be clear, that’s an increase in speed from 4G LTE where you are.

Many people that I’ve talked to about 5G seem to assume that 5G’s worst should be better than 4G’s best. That’s not accurate, and it doesn’t respect how 5G actually works. We’re not talking about speed tiers here. 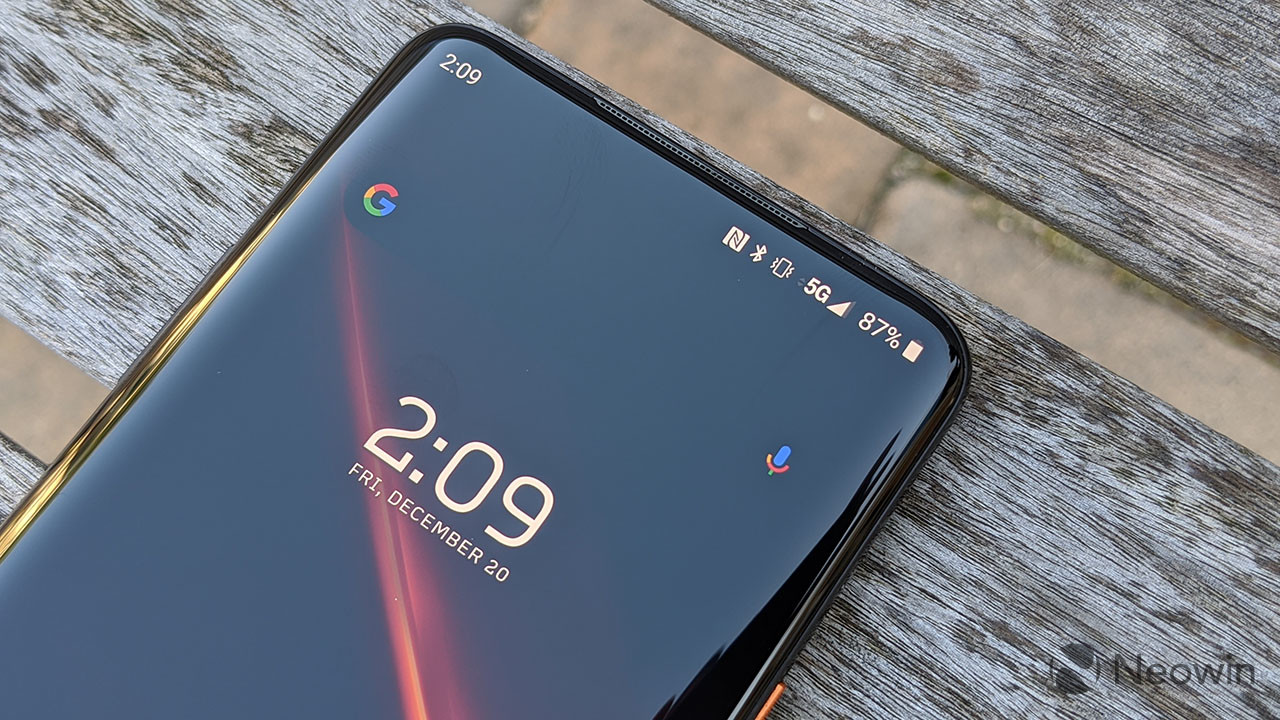 Every carrier is doing 5G differently. Verizon is rolling out millimeter wave (mmWave) 5G. It’s fast, providing gigabit speeds; however, mmWaves are easily blocked. If you’re standing on the wrong side of a window, you won’t get service. In fact, mmWave won’t work indoors at all.

Eventually, 5G will be a combination of sub-6GHz low-band and mid-band, and mmWave. T-Mobile’s strategy is to start with 600MHz low-band while slowly rolling out mmWave. It should also acquire mid-band when it merges with Sprint, assuming that that gets approved. Between those three things, T-Mobile probably has the best plan for a robust 5G network.

The only problem is that the OnePlus 7T Pro 5G McLaren isn’t built for it. This handset supports sub-6 only, so there’s no mmWave support. What’s really strange is that T-Mobile actually has mmWave in some cities, so if you buy a OnePlus 7T Pro 5G McLaren in, say, Manhattan, you don’t get the full 5G experience that’s offered there. In fact, there are still no phones at all that support both sub-6 and mmWave. I’m told that those should be coming soon though.

Here’s the deal on T-Mobile 5G, and I said this about Sprint’s 5G as well. The cellular connectivity speed is faster than it was last year, and not as fast as it will be next year. That’s the best way to put it. I’ve seen people say to stay away from 5G until it’s fully baked, but why? Should you really stick with a new 4G LTE phone for another two years when you can use a sub-6 5G phone? Of course not. Sub-6 5G is still faster than 4G.

What sparked my interest in T-Mobile’s 5G was that it’s available pretty much everywhere. If you don’t have it where you live, you probably have it nearby. This is the first 5G test I’ve been able to do without taking a train into Manhattan. It’s actually available where I live, and the places that I go. That’s what actually matters.

The camera on the OnePlus 7T Pro 5G McLaren seems to be the same as on the OnePlus 7 Pro, not that that’s a bad thing. It includes a triple-lens camera, with the main sensor coming in at 48 megapixels. There’s also an eight-megapixel 3x zoom lens, and a 16MP ultrawide lens.

The rear camera uses quad pixel technology, merging four pixels into one for better low-light performance, so the 48MP sensor does give you a 12MP image. It also has a large, f/1.6 aperture, allowing in more light. And if that’s not enough, OnePlus offers Nightscape mode; however, Nightscape only works with the main and ultrawide lenses.

I think that the camera does a great job. It handles details very well, even when things are moving like the waves on the ocean. It might try to oversharpen or oversaturate at times, but it gets the job done.

Low-light performance is fine, especially with Nightscape mode on. There’s just one problem though, which is that other companies like Apple, Google, and Huawei are absolutely killing it in the low-light area right now. Unfortunately for OnePlus, being good doesn’t make you better than the competition.

As usual, OnePlus put together a phone with the best specs that you can put in a device. It includes a Qualcomm Snapdragon 855+ chipset, the latest flagship SoC from that company, which is supposed to be aimed at gaming smartphones. It also includes 12GB RAM, which is more than you’ll find in most laptops. And of course, OnePlus uses UFS 3.0 storage, which is must faster than the previous UFS 2.1.

This is a fast phone. There’s no doubt about that. It’s got the best SoC, the most RAM, the fastest storage, and of course, 5G. You really can’t beat that, and the OnePlus 7T Pro 5G McLaren delivers in the real-world experience. Playing games on this device looks amazing with the 90Hz refresh rate. When it comes down to the overall experience, it doesn’t get any better.

Battery life is good, although I do think that it’s not as good as the 4G OnePlus 7 Pro. It’s a big battery though, and you shouldn’t have any problems getting through the day. Just in case you do though, it supports Warp Charge 30T, which is crazy-fast charging. As I mentioned earlier, you can’t just use any 30W charger to get these speeds. You’ll have to buy into the OnePlus range of accessories. The company sells chargers, car chargers, etc.; it’s pretty much everything except for a portable battery.

For benchmarks, I used AnTuTu, Geekbench 4, Geekbench 5, and GFXBench. First up is AnTuTu, which tests the CPU, GPU, and the memory.

Next up is Geekbench 4 and Geekbench 5. Geekbench 5 provides different scores than Geekbench 4, so I’m keeping both in the rotation for now. 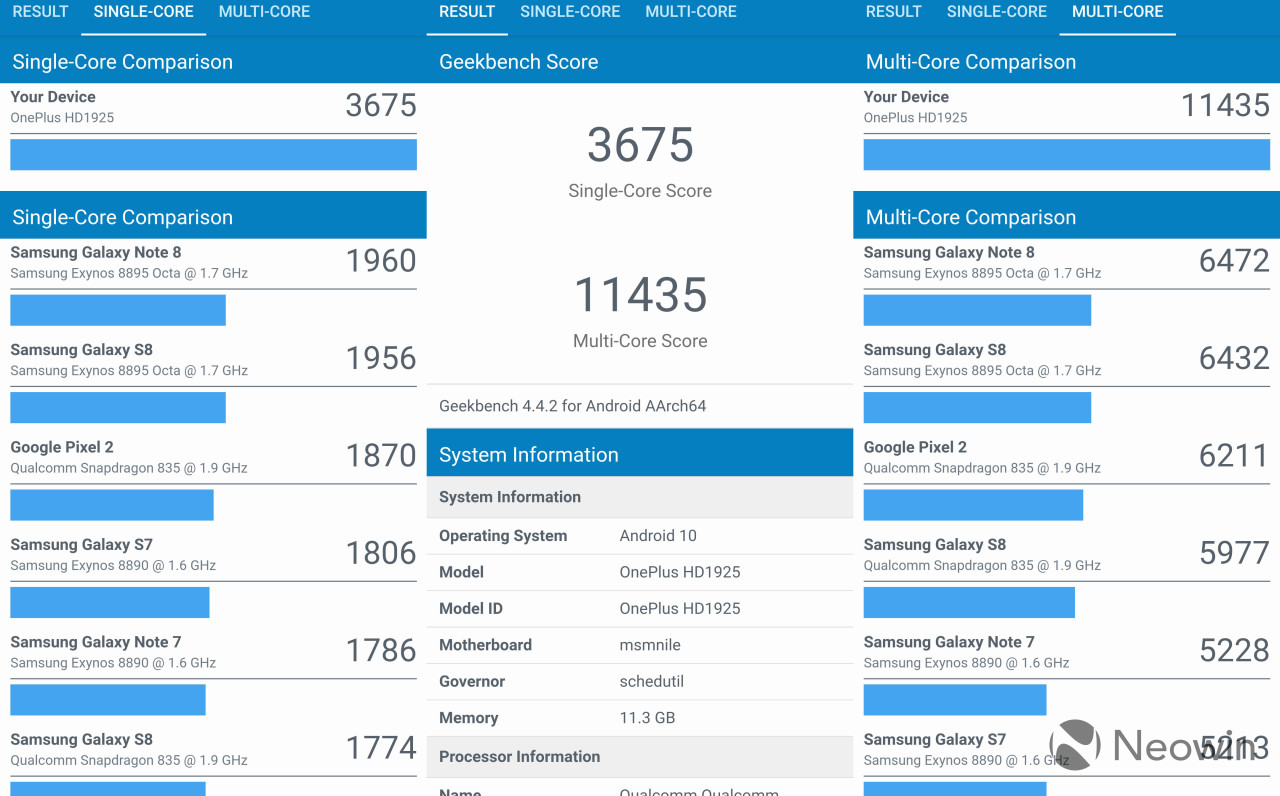 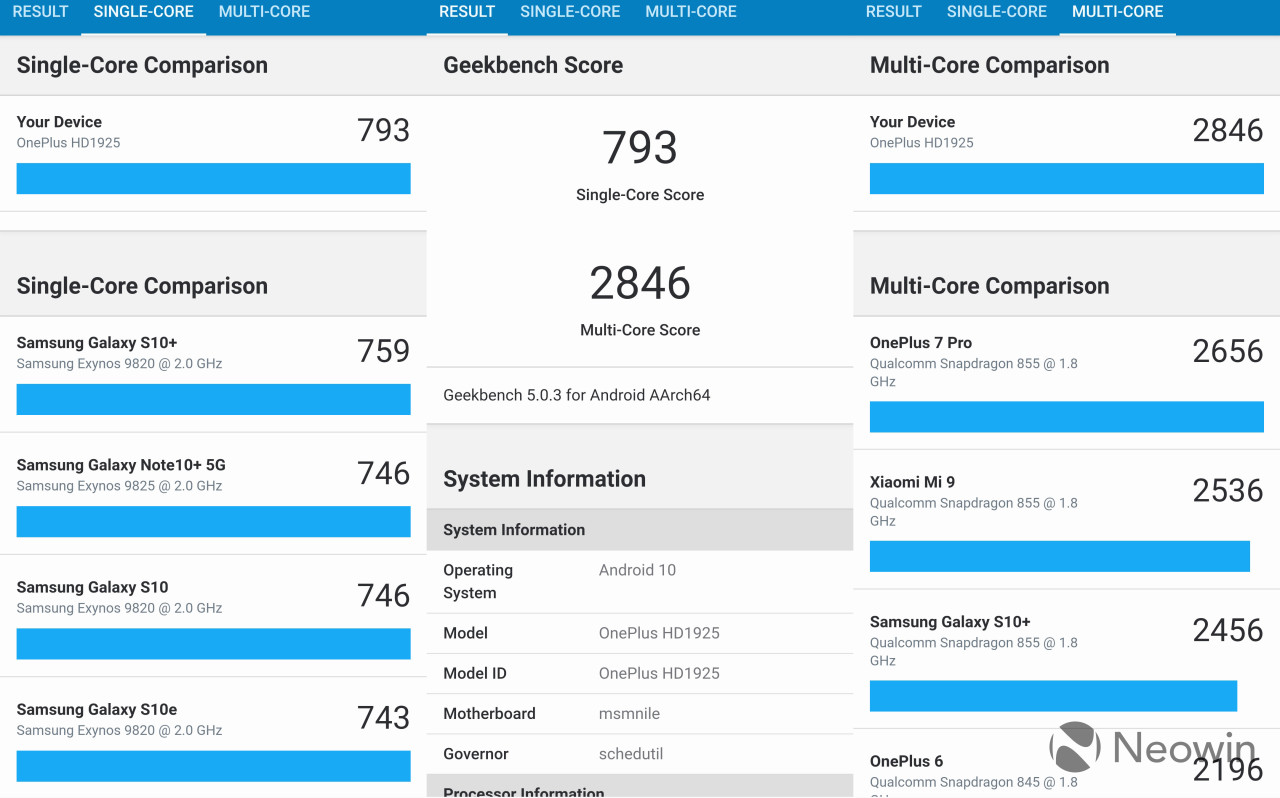 These scores are pretty much the same as the OnePlus 7T, which has the same chipset. It still comes in below Apple’s A13 Bionic in the iPhone 11 Pro, which got 1,338 on single-core and 3,567 on multi-core. Finally, GFXBench tests the GPU.

The OnePlus 7T Pro 5G McLaren is easily one of the best smartphones on the market, 5G or no 5G. It has the sexiest design that you’ll see on a smartphone this side of China, the best performance, and a beautiful Fluid AMOLED display. 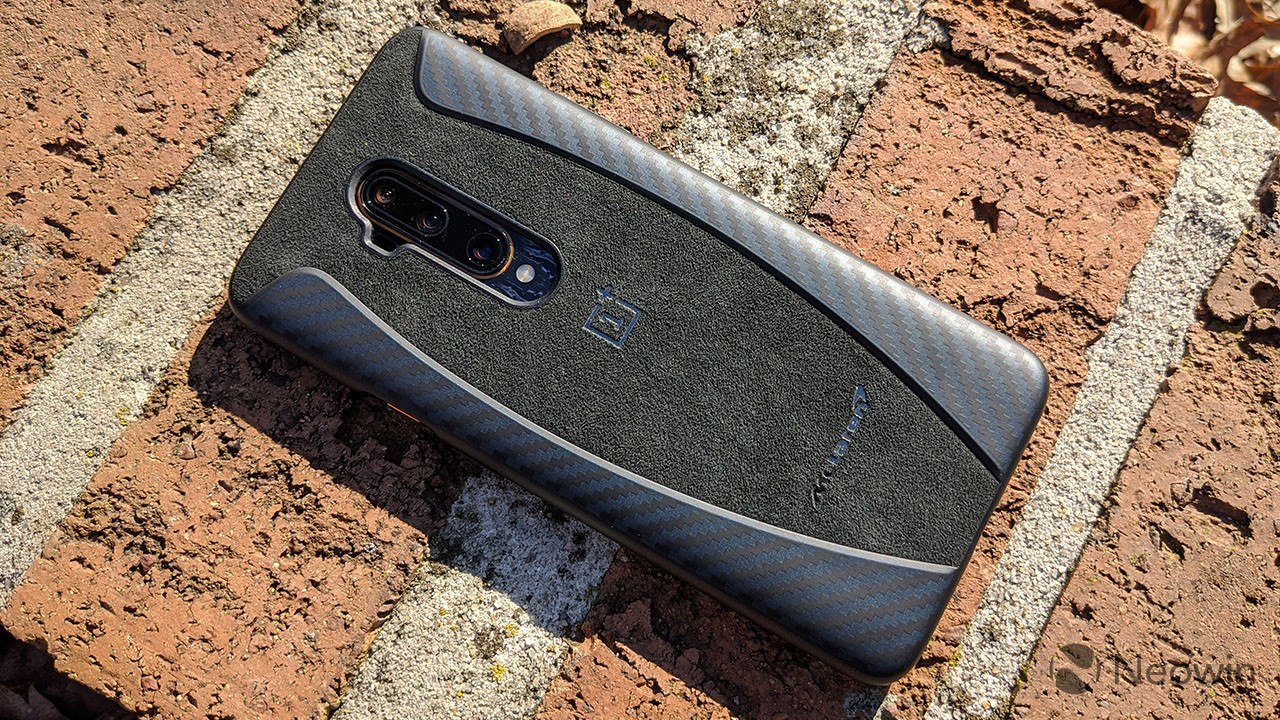 If you’re OK with those two things and you’re on T-Mobile, then the OnePlus 7T Pro 5G McLaren is for you. It’s an absolutely phenomenal device. Even though this is the fourth Fluid AMOLED OnePlus phone I’ve reviewed, I still can’t get over just how beautiful it looks, how pleasant it feels to use.

And I love the design. Everything about the way that this handset was crafted feels unique, from the design around the camera module on the back to the orange accents.

If you want to check out the OnePlus 7T Pro 5G McLaren on T-Mobile, you can find it here.