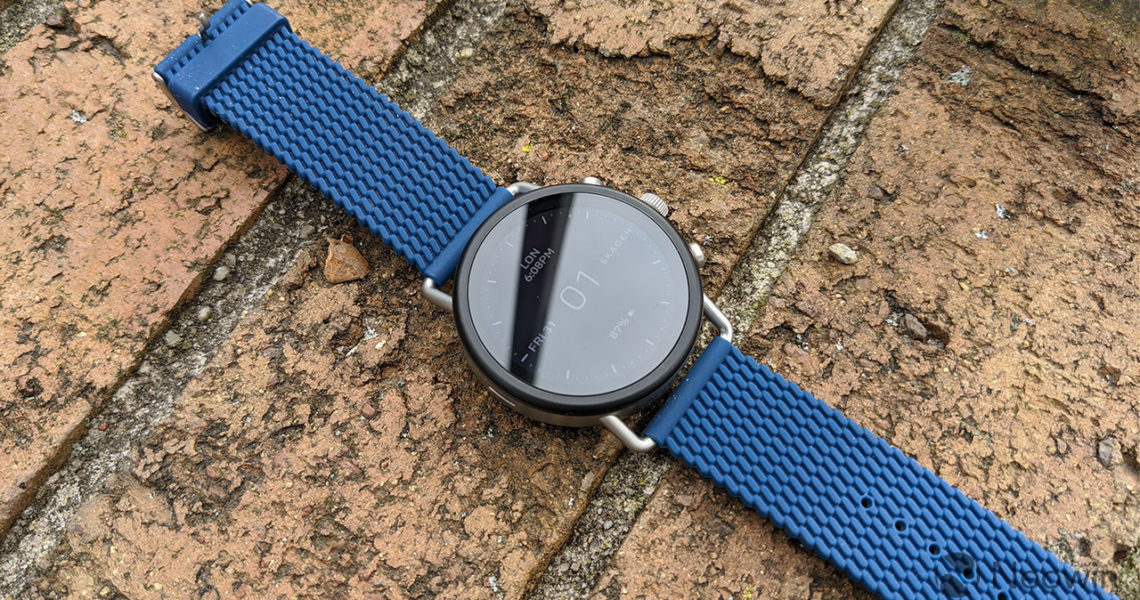 Skagen is a Danish brand, but like other brands like Giorgio Armani, Kate Spade, Michael Kors, Diesel, and Misfit, Fossil makes its smartwatches. This is a good thing, providing a consistent experience across different brands and styles.

When I first saw the Skagen Falster 3 at CES, it was described to me as a Gen 5 Smartwatch, as were a number of other devices I saw. That means that it has a Snapdragon Wear 3100 chipset, 1GB RAM, 8GB of storage, and it has some additional features like the ability to take calls on an iPhone.

However, it’s in a different case from the Fossil model that I reviewed last year. What’s cool about Fossil’s model here is that you don’t have to focus so much on specs, as on the design that you like. You’re free to focus on fashion, knowing that the tech specs behind the Gen 5 Smartwatch provide the performance for a solid experience.

And the Falster 3 is beautiful, probably the best-looking Wear OS smartwatch on the market. It has a minimal stainless steel design with flat sides. It’s a very clean look.

You’ll notice that there are some specs that just aren’t listed, which is common for Fossil smartwatches. It doesn’t list the weight of the watch, the display resolution, and more.

These days, there’s no shortage of stylish Wear OS watches, especially with the fashion brands I noted above on-board the smartwatch train. Obviously, fashion is a very personal choice. It’s about what looks good to you. For me, I think the Skagen Falster 3 is one of my favorites, although I will say that I quite like the Giorgio Armani Smartwatch 3 as well, which is another Gen 5 Smartwatch.

The Falster 3 comes in a stainless steel case with flat sides, and that case comes in silver, gunmetal, or black. On all three models, the top part of the case is black, a style decision that makes the screen’s bezel not stand out as much. 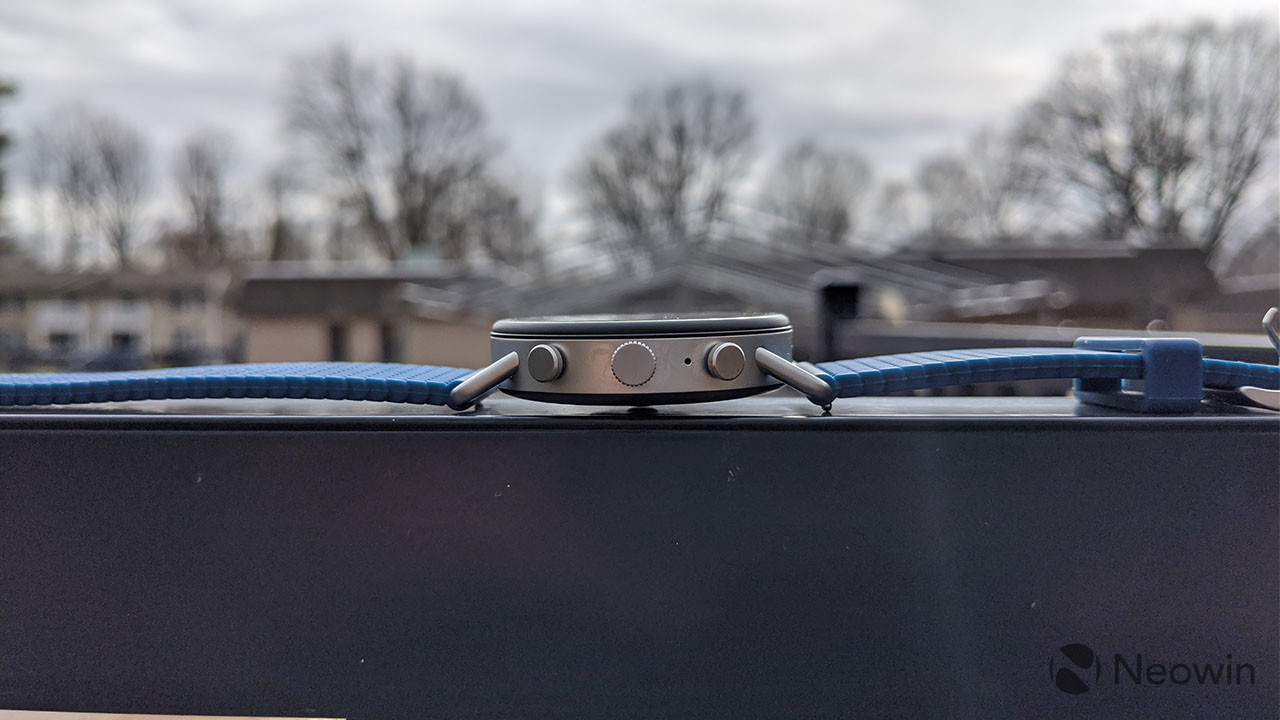 As usual, there are three buttons on one side. The middle button can be rotated to scroll, and it also acts as your home button, either launching the app drawer or bringing you back home. The other two buttons won’t be used as much, with the top one launching Fossil’s customization options and the bottom one launching Google Fit. 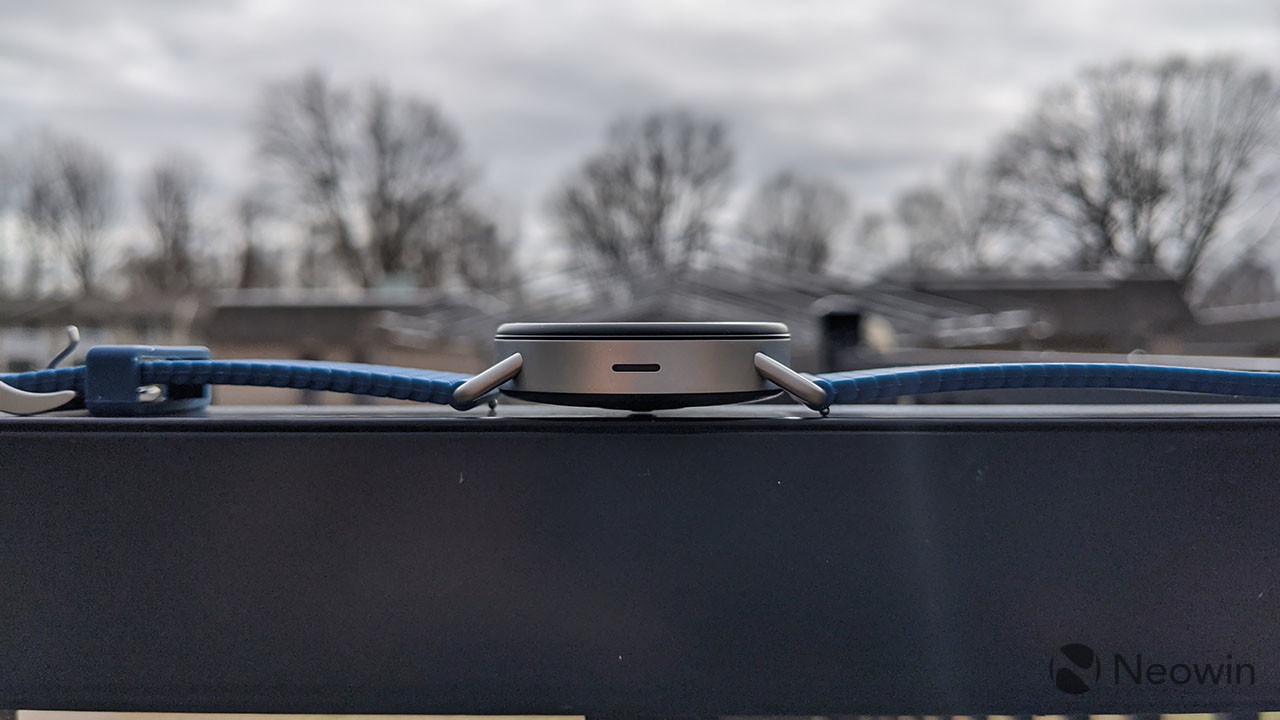 This watch does have both a speaker and a microphone, which is what allows you to take calls on it. Of course, you’d probably prefer to do that with Bluetooth headphones, but you do have the option of using the speaker. 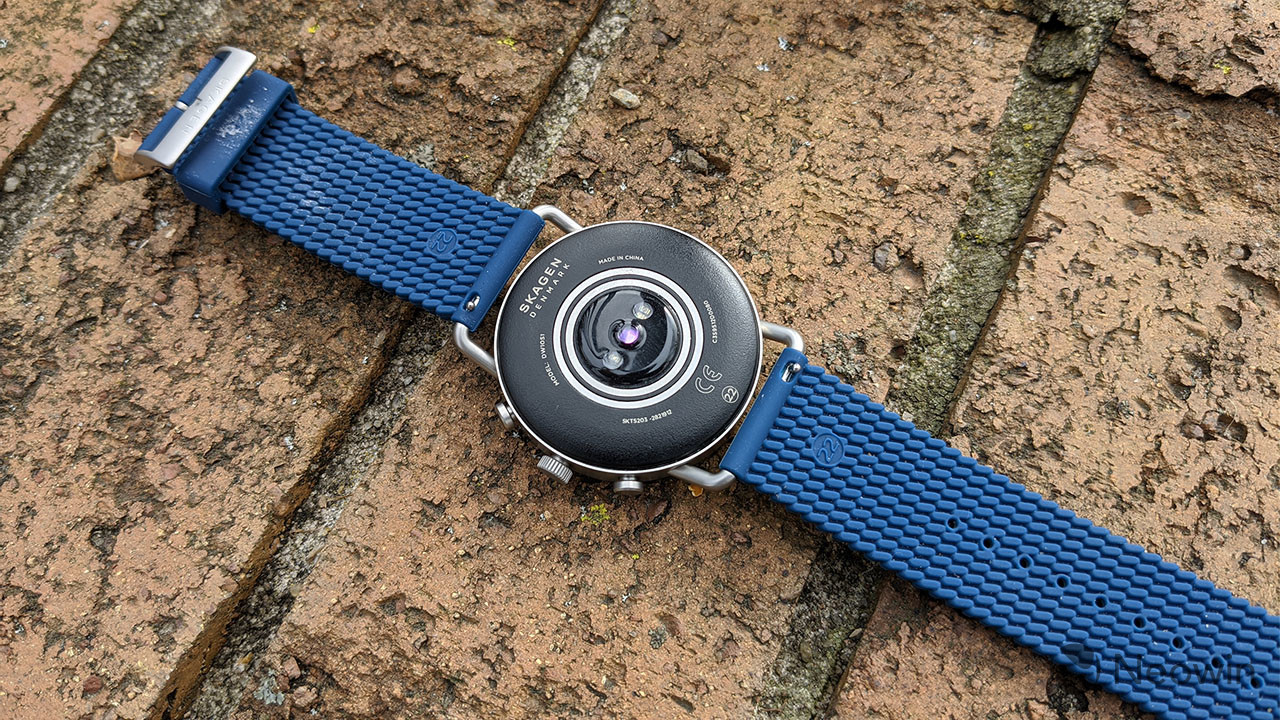 Like all Fossil watches, charging is done through two rings on the back. It’s pretty great. The charger itself just has two pins, but they can connect to any point along those rings, meaning that there’s a larger surface area to charge on. It’s especially useful because with pin charging, sometimes the pins get dirty after a time after being on top of your sweaty wrist. With the larger surface area, you won’t have to spend as much time cleaning it.

The Falster 3 uses standard 22mm bands, so you can easily replace the blue silicone one that comes with it. There’s a pin on the side that you can slide to remove it. The watch has two prongs on either side that the band connects to, so while it actually kind of looks like the band is physically attached to it, it’s still easy to take off.

I quite like the blue band though. Not only is it comfortable, but it’s stylish. 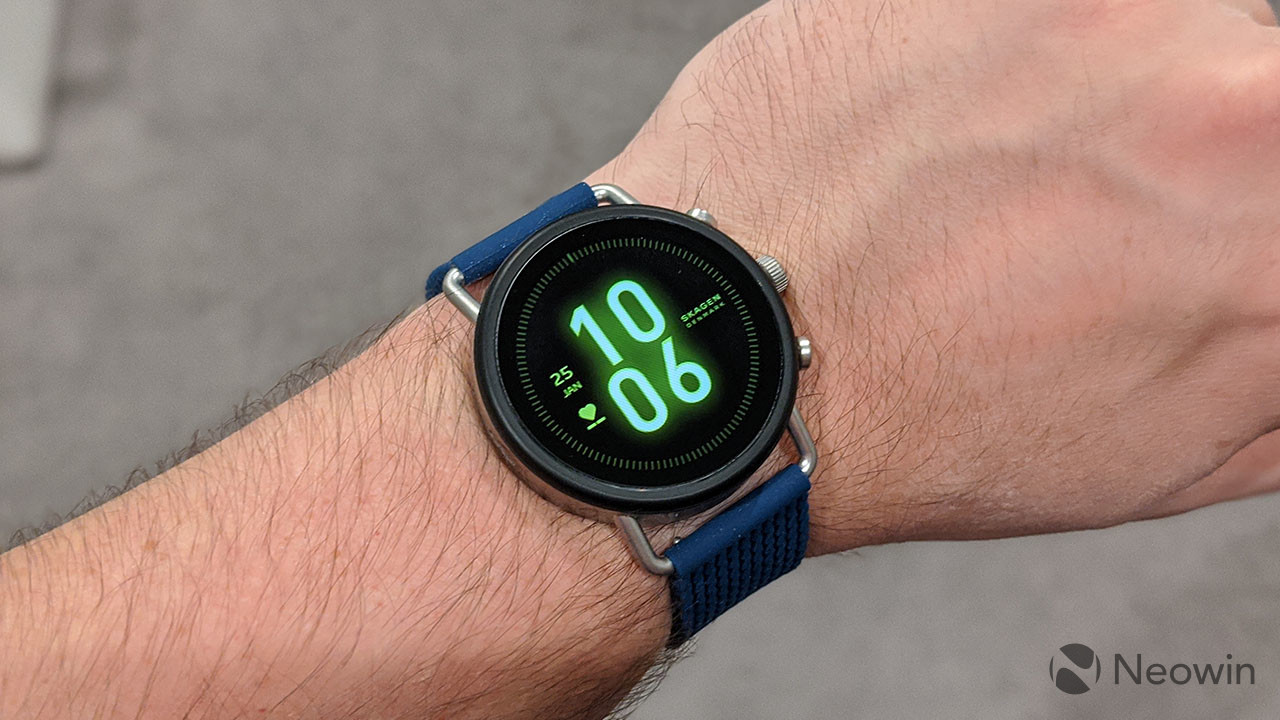 In fact, the watch itself is comfortable. It doesn’t feel too heavy or too bulky, something that I’ve had a problem with on older Wear OS devices. It’s just right.

The screen is quite nice as well, although like the weight, I don’t have any solid specs on it. What I can say is that there’s no visible pixelation, and it’s definitely OLED. You can tell that it’s OLED by the way that you can’t see where the screen ends and the bezel begins. Also, virtually all smartwatches have OLED displays.

Wear OS is, well, Wear OS. It’s not a particularly good smartwatch operating system, but it’s all you can get if you’re not buying from Apple or Samsung. It’s a real shame that Google hasn’t put more effort into it since 2014 when it was introduced. I also feel sorry for the OEMs that have to deal with it. 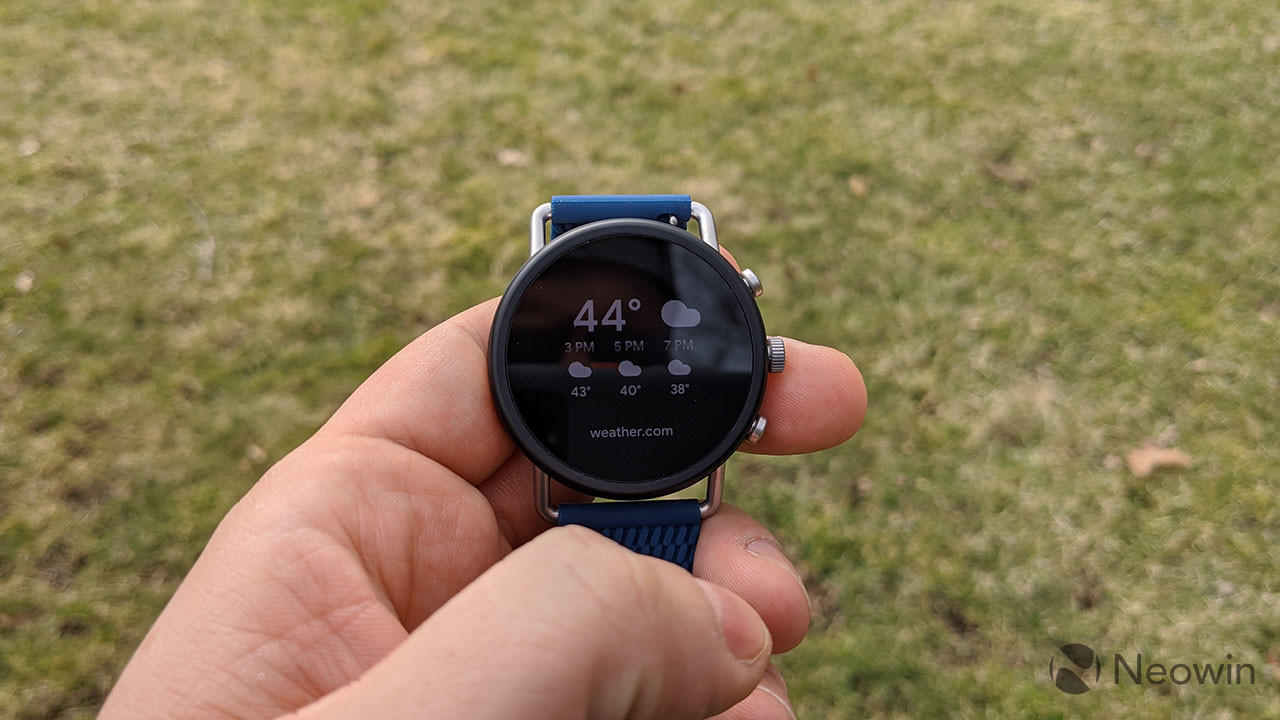 As far as interactions with Wear OS go, it’s pretty straightforward. Swipe down for quick settings, swipe up for notifications. Swipe right for Google Assistant, and swiping left will bring you to the newest feature, Tiles. Tiles give you quick views of various apps, such as Fit, Calendar, and Weather.

Tiles are my favorite part of the OS, partially because they remind me of the original Android Wear, which used to be centered around Google Now and knowing what you want to see before you take action to see it. Now, Wear OS is very app-centric, and I couldn’t care less about most smartwatch apps. Some apps are important, but there aren’t as many, like there would be with a smartphone. 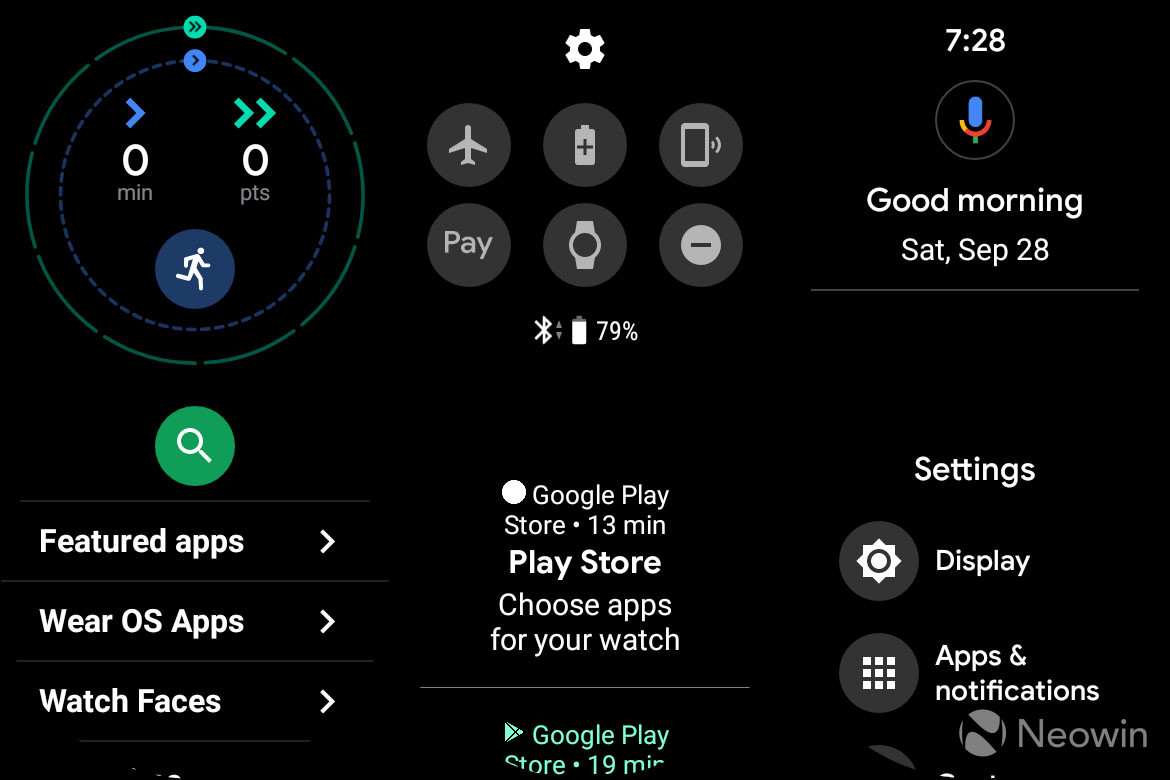 I used the Skagen Falster 3 with an iPhone 11 Pro, and what’s cool about Wear OS in this context is that you really don’t make sacrifices by using an iPhone instead of an Android. Wear OS comes with its own Google Play Store, so you don’t miss out on the apps that you do want, like Google Maps and so on.

And Fossil’s smartwatches allow you to take calls from an iPhone, something that other Wear OS watches can’t do. After setting up the watch, you’ll get a notification to pair it again with the iPhone, and yes, it shows up in Bluetooth settings as two different devices. After that, it works great.

One of the reasons that I like to test out Wear OS watches with iPhones these days is because in my experience, battery life suffers with this choice. It would be irresponsible of me to test it out on Android, tell you that battery life is great, and then have you pair it with an iPhone only to find that it doesn’t make it through the day. 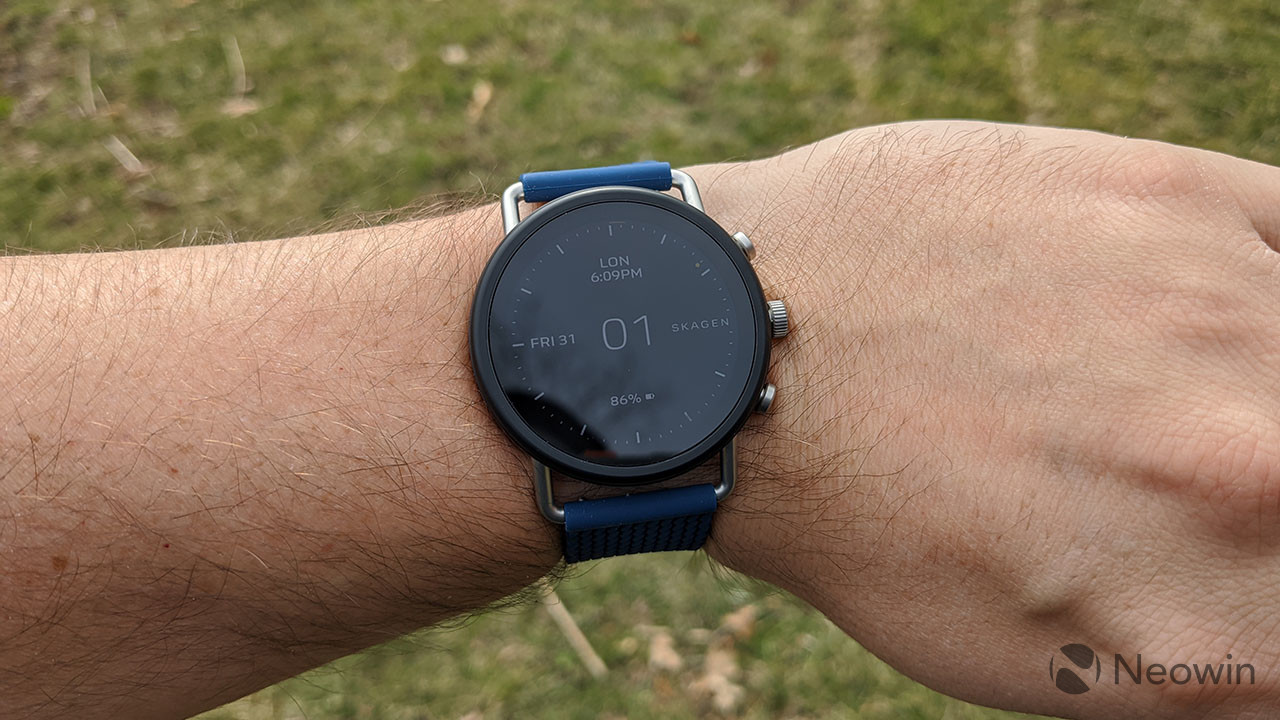 The good news is that I never had trouble getting it to make it through the day, although it was close. On average, it was on around 20% when I put it on the charger at night. On some days, it wanted to put itself in battery saver mode.

But that’s another thing that’s cool about Fossil’s smartwatches; there are different customizable battery modes. If you want to go extreme, you can put it in time-only mode and get the battery to last over a week. I haven’t tested this though, because when I wear a smartwatch, I want it to do stuff. The point is that there are different battery modes that have different levels of features, and there’s a custom mode.

With a Snapdragon Wear 3100 chipset and 1GB RAM, performance is pretty great. This is also where I’m going to complain about Qualcomm’s lack of efforts, just like how I complained about Google’s lack of efforts in the previous section. Since the first Android Wear watches were introduced way back in 2014, the main architecture of the chipsets used hasn’t changed.

Performance is great though because frankly, there are no Wear OS watches with better hardware. The 1GB of RAM is what really makes for a smooth experience. Fossil’s Sport smartwatches only have 512MB RAM, and you can feel the lag on those.

The thing that’s changed in the Snapdragon Wear 3100 is that it uses big-small-tiny architecture, basically taking big.LITTLE on phones and scaling it down to wearables. It allows for better power management, a full-color always-on display, and a moving second-hand on the always-on display. The only problem is that most watch faces are made for older hardware, so it’s hard to find one that actually takes advantage of the new chipset.

As I’ve said previously about the Fossil Gen 5 Smartwatch that I reviewed called the Carlyle, this is the best that it gets for Wear OS. The performance is buttery smooth, and it comes in a beautiful case. 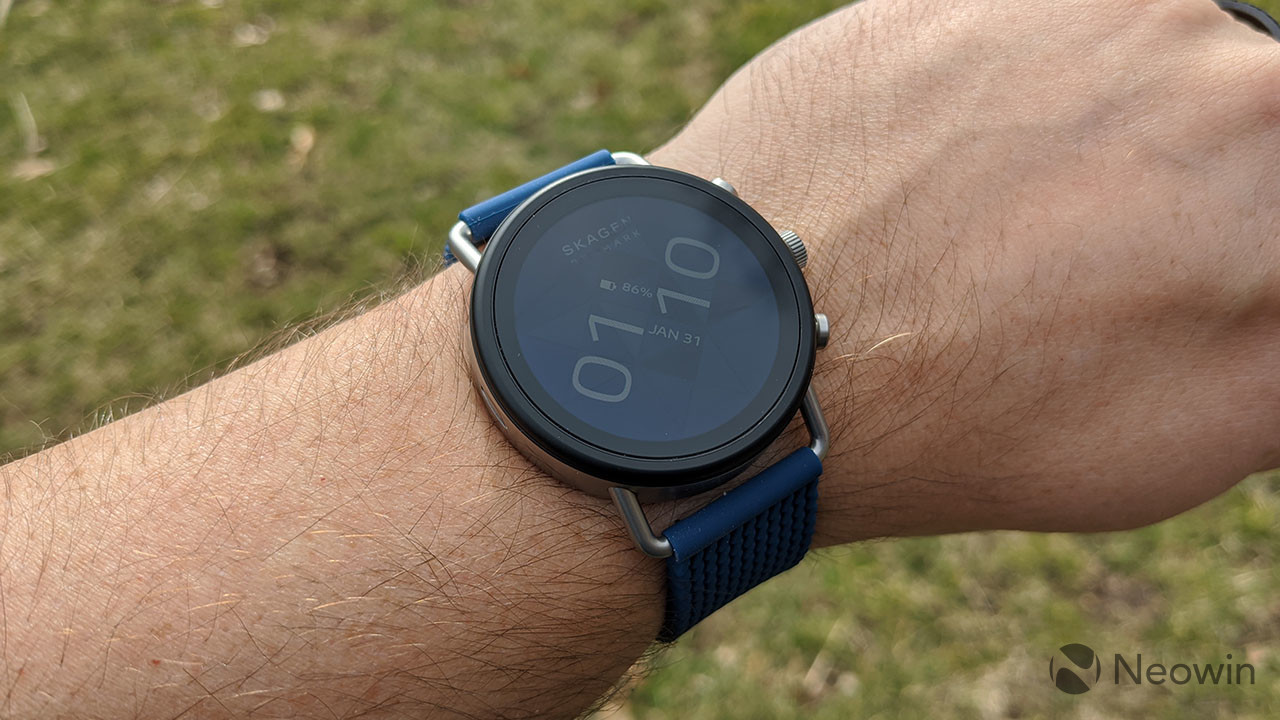 Smartwatches really are a fashion item. I think that for most people, the primary motivation behind the one you purchase is that you like the way it looks on you. Functionality comes second, and the functionality that we primarily look for in a smartwatch is notification delivery. Obviously, the Falster 3 does that quite well.

It’s really just the inconsistencies in Wear OS that are the problem. It’s like the pieces are there, but Google needs a solid software update to put the puzzle back together the right away.

The Skagen Falster 3 is the best of that world. The minimal design is beautiful but not in a flashy way. It’s comfortable, but not fragile. This is a great smartwatch, and at $295, it doesn’t break the bank in the way that many others would.