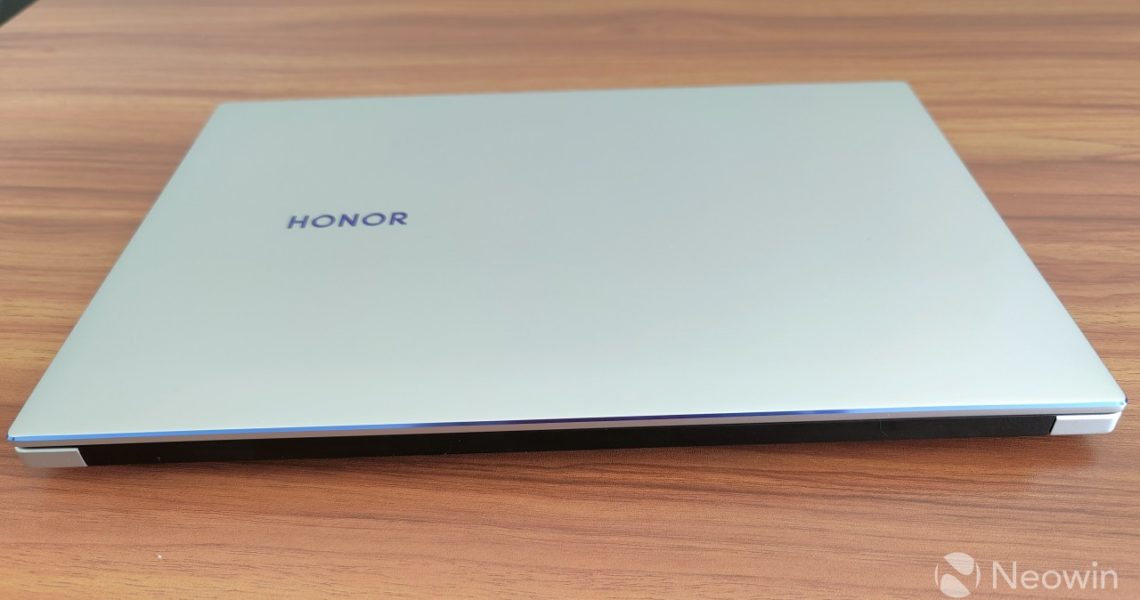 Honor MagicBook 14 review: It looks and feels good, but there are some issues

Much like Huawei, Honor is mostly known for its smartphones, but the company has released laptops in the past. Back in 2018, Huawei released a variant of the MateBook D with an AMD Ryzen processor, and now, the Honor sub-brand is also betting on AMD with the new MagicBook models, which are mostly the same aside from the screen size.

The new MagicBook is aimed squarely at the mid-range, with a Ryzen 5 processor, 8GB of RAM, and a Full HD+ display. It also includes some nice-to-have features, like fingerprint recognition for Windows Hello, making for a solid proposition in its price range. I got the 14-inch model, which surprisingly has a bigger battery.

One of the things that stands out about the MagicBook is the way it looks, specifically on the outside. The lid of the laptop features the Honor log with a purple-ish blue reflective color, and the chamfered edges of the lid have a beautiful light blue sheen that looks amazing when light reflects on it. I do wish this sheen was more visible and not as dependent on light reflection, so it was a bit easier to admire the beauty of it.

I also wish some of the flair was visible on the inside. Once you open up the MagicBook, it looks pretty much like any other aluminum laptop, with a silver (or space gray) base with a keyboard, trackpad, and power button, which doubles as a fingerprint sensor. The base is packed fairly tight , so I’m not too upset that there aren’t top-firing speakers here. 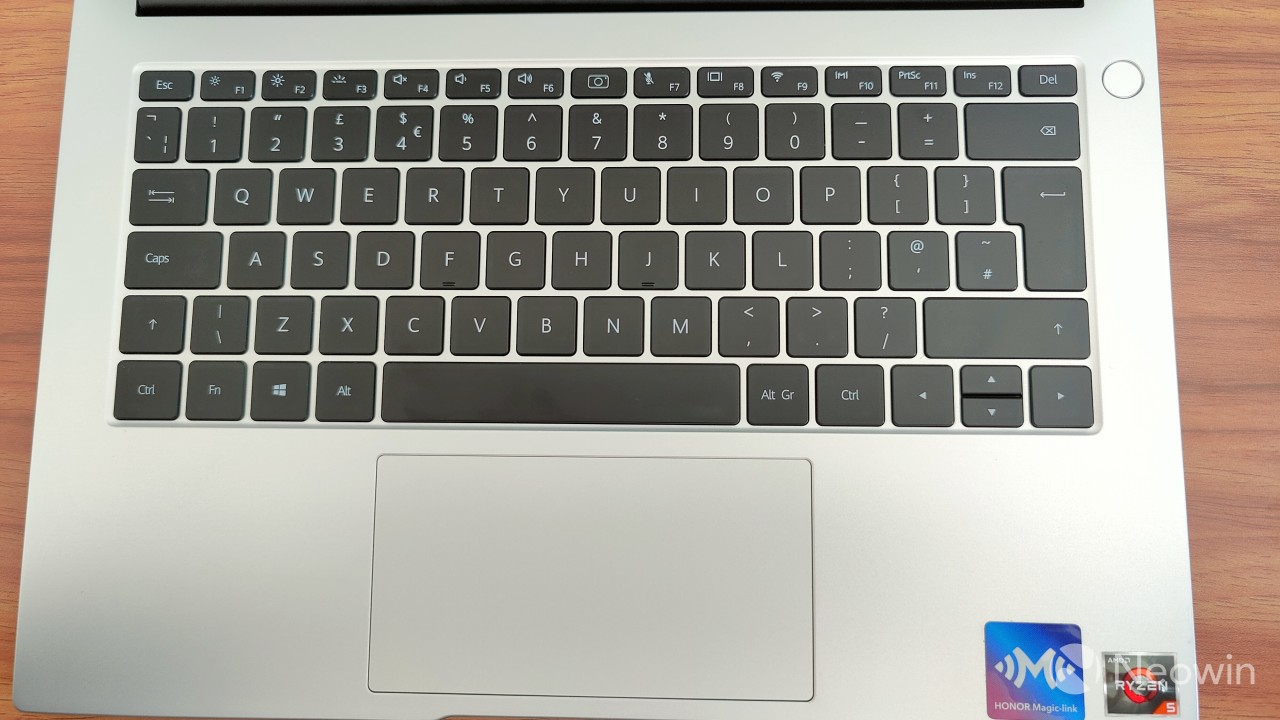 The top half obviously has the Full HD display, which has minimal bezels at the expense of having a webcam above it. The webcam is instead hidden in one of the keyboard keys, but we’ll get into that in a bit. 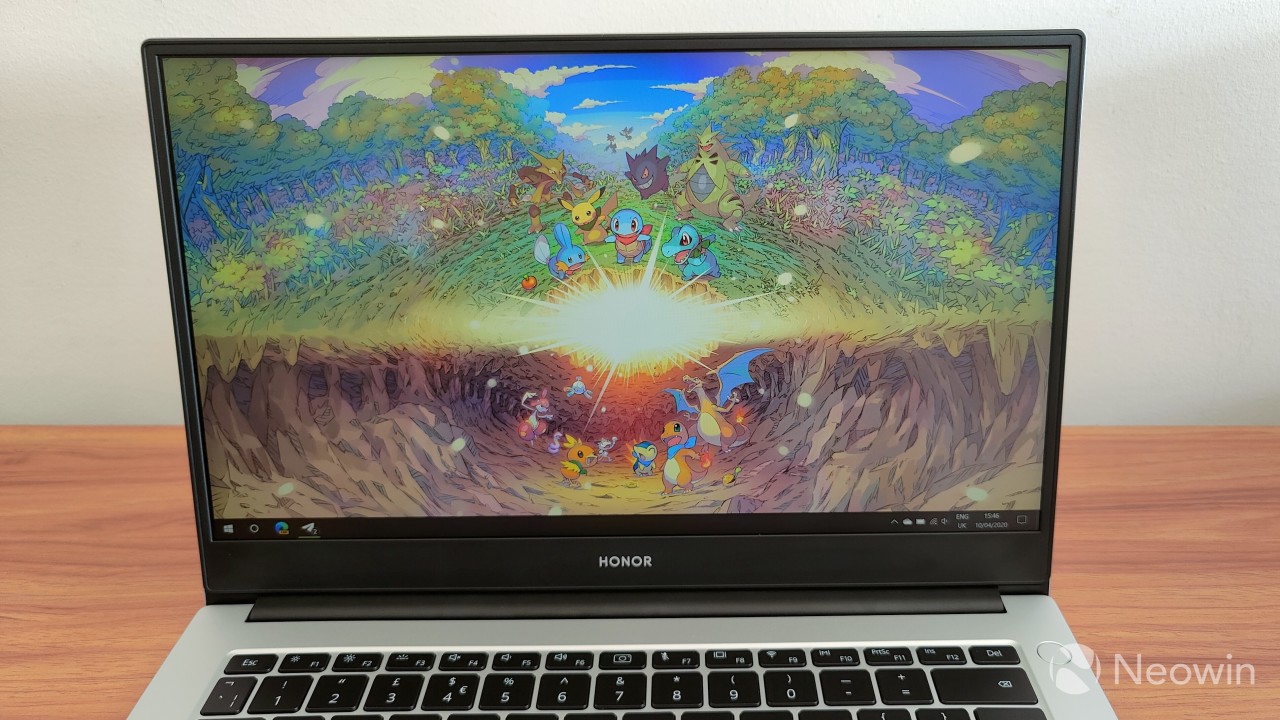 The MagicBook is made of aluminum and it’s absolutely one of the more rigid laptops I’ve used. Both, the base and the display portions are sturdy and show very little flex, so I would trust the durability of this chassis. It’s also not too heavy, but that needs to be put in context – it feels quite dense, but this is the first 14-inch laptop I’ve had in my hands in years, so it’s still lighter than my main laptop. 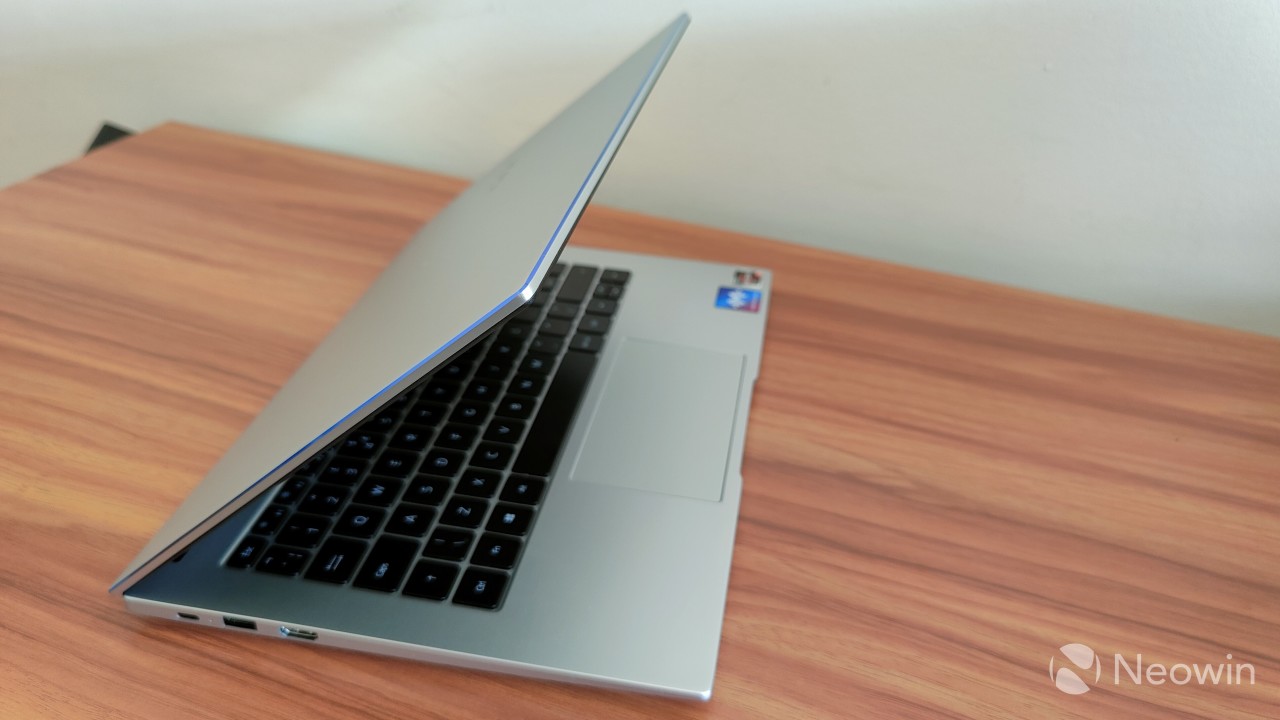 One area that may be slightly disappointing for some is the ports. On the right side, it has one USB Type-A port., which is USB 2.0, and a 3.5mm combo audio jack. Going with USB 2.0 for one of the few ports here is unfortunate, but it should be good enough for peripherals like a mouse if you need one. 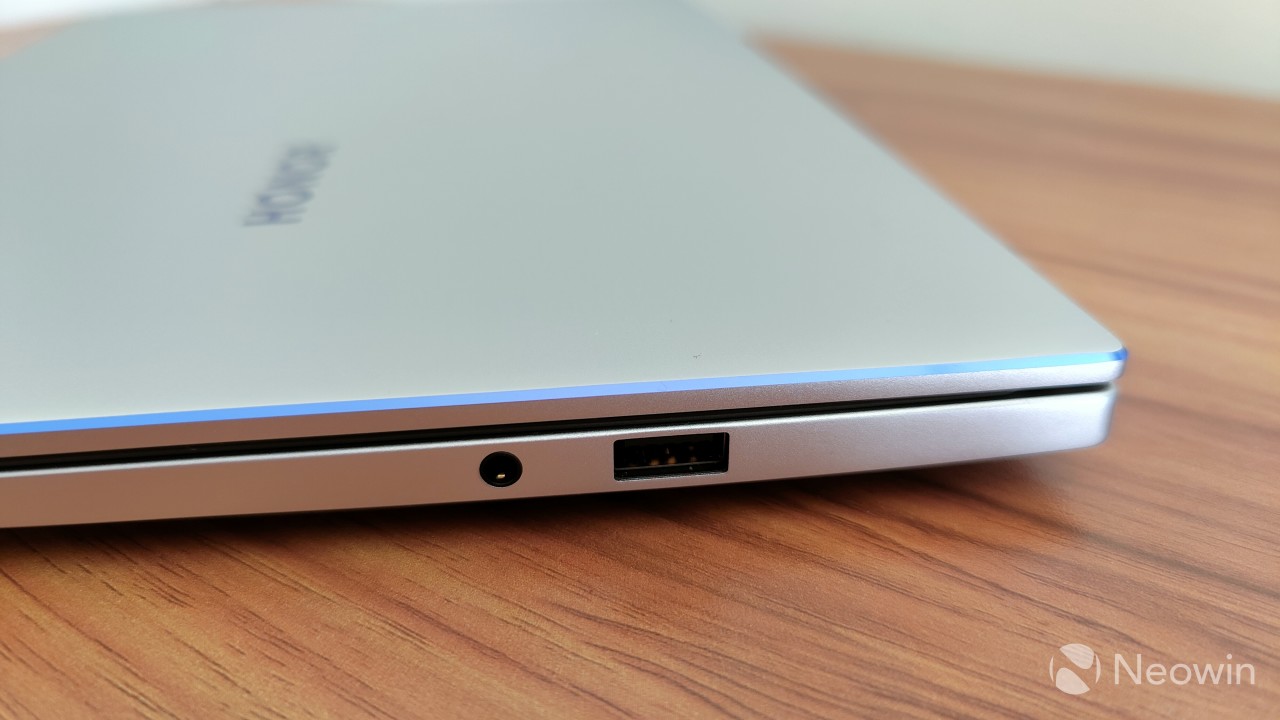 Over on the left side, there’s one USB Type-C port that’s used for charging, a USB 3.0 Type-A port, and HDMI. All in all, the number of ports works well enough for me, and I am glad that the laptop charges with USB Type-C by default, but I do find it a little unfortunate that this is the only Type-C port we get. 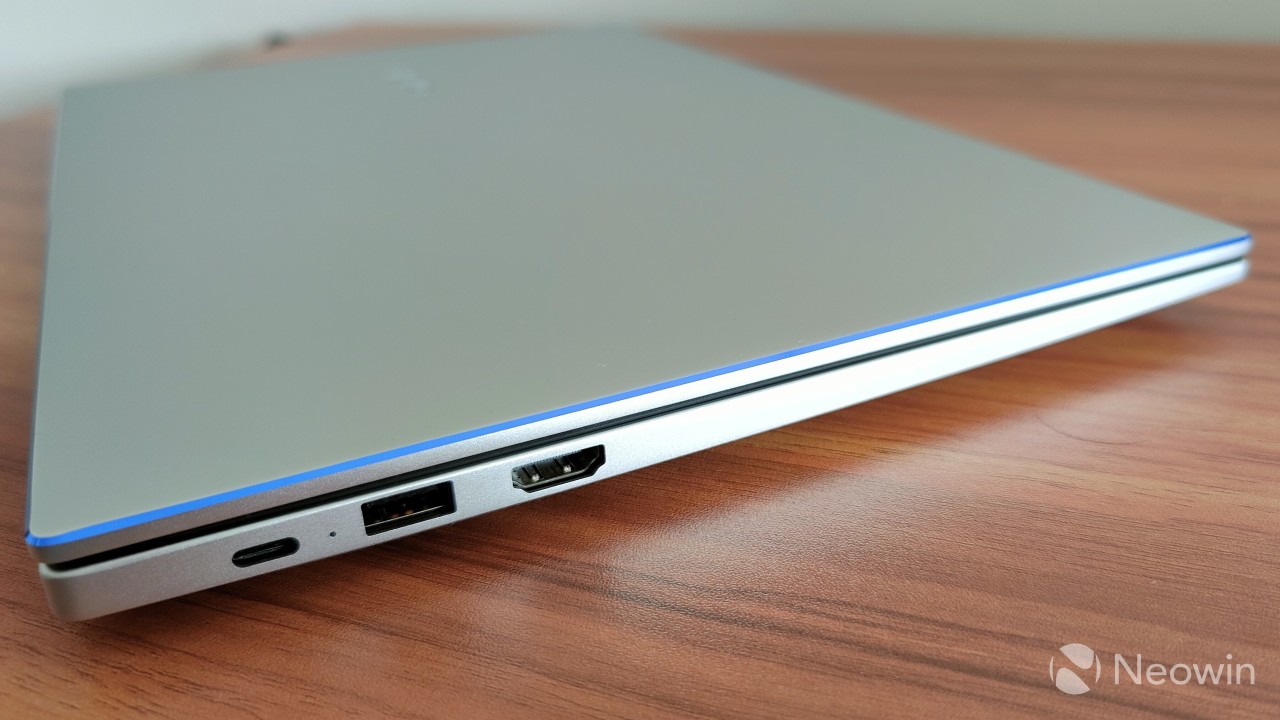 The display on the MagicBook is 14 inches diagonally and has a Full HD resolution. I’ve always found that to be good enough even on 15-inch laptops, and here it’s even better. it’s as sharp and crisp as I would ever want it to be and there’s really not much to complain about in that regard. I also love the tiny bezels – while I’m in my workflow, I almost feel like there’s nothing around the display. I’ve always felt like 14-inch laptop displays are too small, but this ended up feeling great. The coating on the display also doesn’t have much glare or reflectiveness, but it’s not completely matte, it looks and feels nice. It’s not a touch screen, though, too many times I have been disappointed when I try to tap the screen. 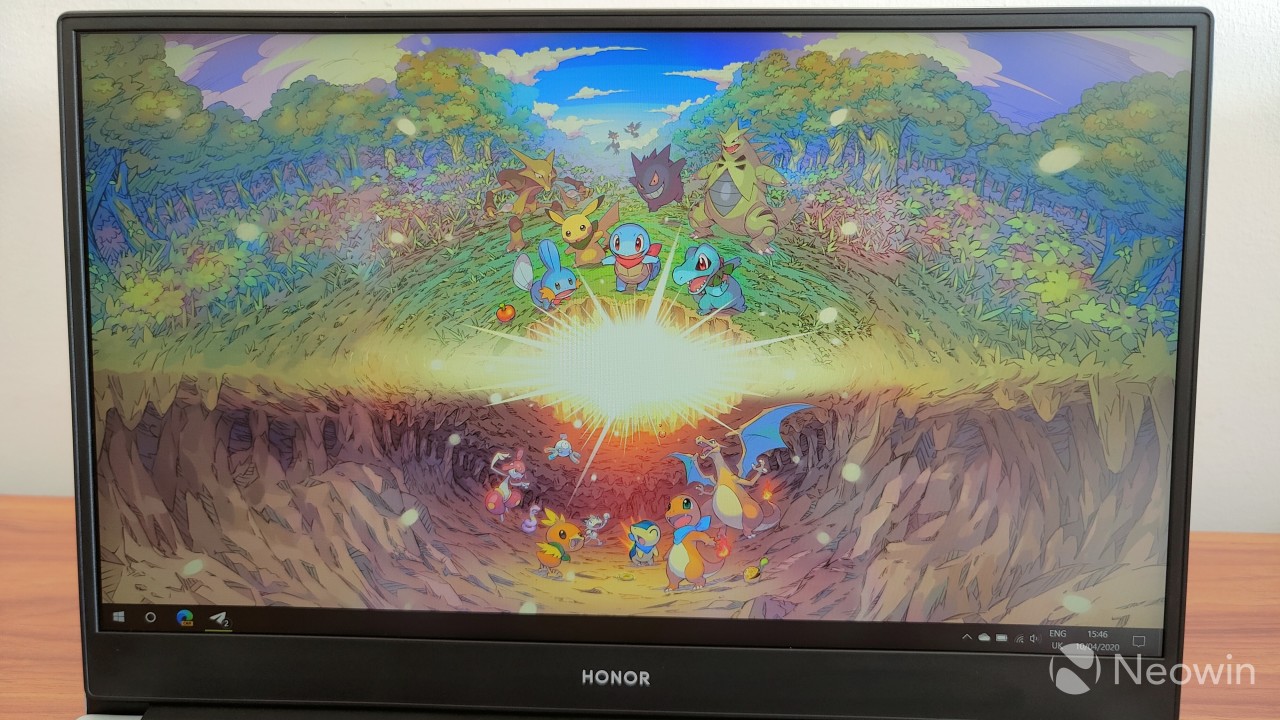 In terms of color, the display here is also pretty good. The color temperature is slightly cooler than I’m used to, but when I’m just looking at this laptop by itself, I really don’t feel the difference. I only notice it if I put it side-by-side with my main laptop, and even though I can see a difference, I would be hard-pressed to pick a favorite. The range of brightness here is also pretty great, and it’s visible enough under daylight, but also gets dim enough that it’s still comfortable enough in pitch-black rooms, which is a problem I have more often.

As for sound, like I said, the speakers here are bottom-firing, and though that may seem disappointing, they are surprisingly good. They can get pretty loud and the sound is pretty rich without being distorted at higher volumes. The fact that the speakers face down is actually not that bad because the sound bounces off the surface of the desk and that adds a bit more dimension to it. The laptop supports Dolby Atmos, and using those optimizations definitely helps the sound experience here. 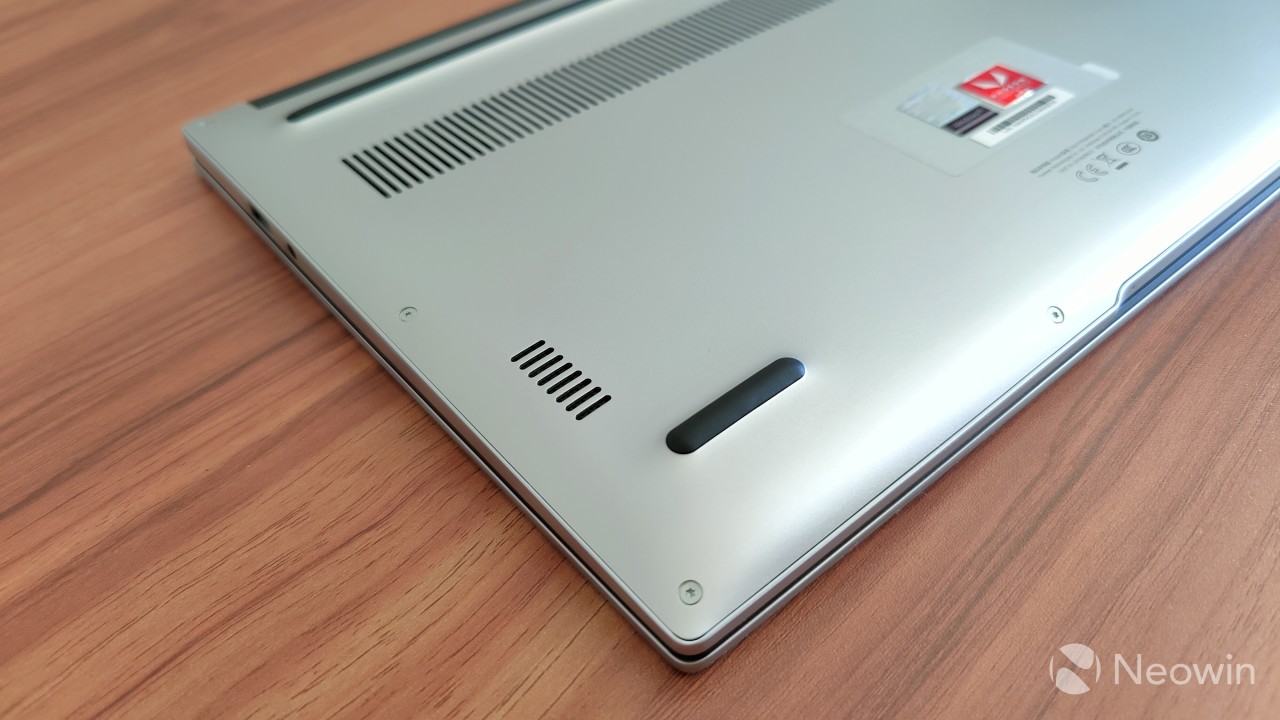 In terms of recording audio, the two microphones on the MagicBook work pretty well and Skype calls were never a problem for me, which is good because some laptops are just not usable without a headset.

In my previous (and first) laptop review, I said I’m not very picky with keyboards, and that holds up here. The keyboard on the MagicBook feels just fine to me, with decent travel and actuation, though I sometimes struggle to hit the Shift key with my pinky finger. My biggest problem with it has really been the fact that it’s a UK layout, which I’m really not used to. Another big problem I have with it is the lack of Home, End, Page Up, and Page Down keys. I find these super useful to get to the end or top of websites and documents, and it’s very inconvenient to use the mouse to scroll when pages are really long. 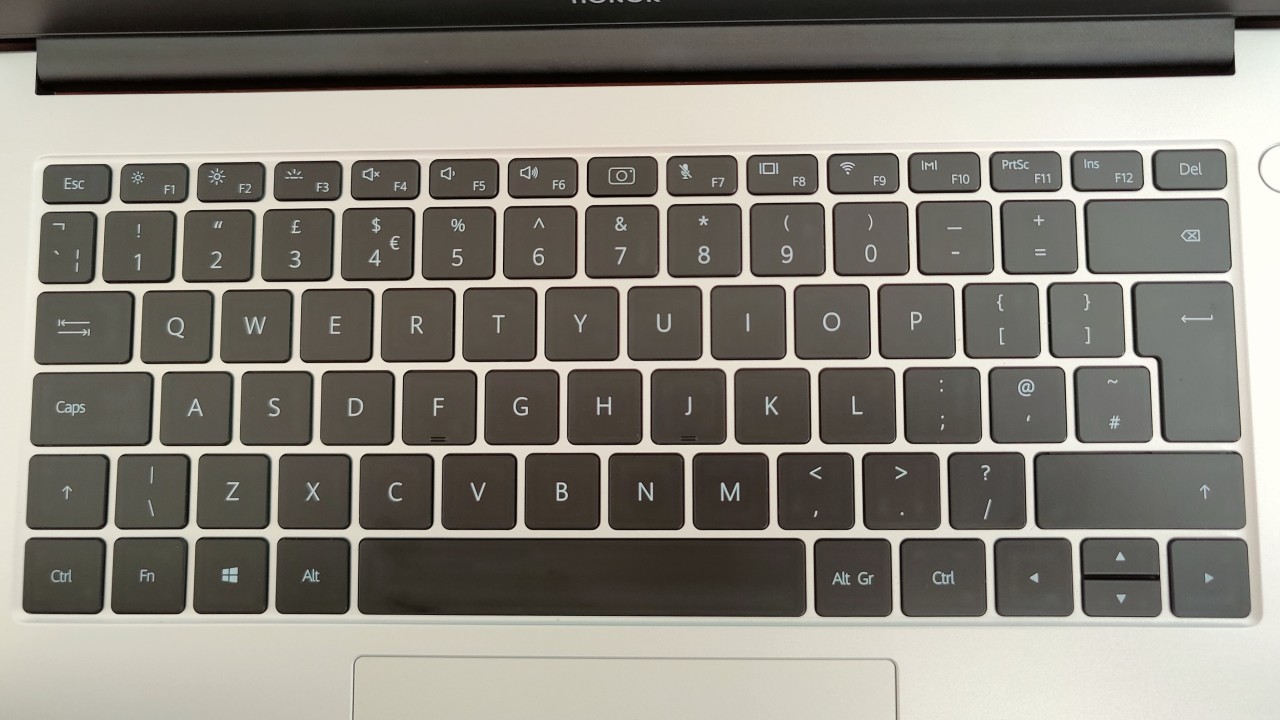 Like I mentioned before, the keyboard also houses the webcam, which is hidden between the F6 and F7 keys. It’s similar to what Huawei does on the Matebook X Pro, and it pops up from the keyboard and it’s pointed upward in a way that’s meant to make you visible when the laptop is on a desk in front of you. I won’t dance around it – this setup is terrible. I understand many people don’t use the webcam very often, if at all, but I use it on a daily basis, and this is just bad. Even if it’s on a desk, it will most likely catch my ceiling light in the view, and so I look way too dark. If I use the camera in a setup other than a desk, I might just not be in the frame at all, and even if I am, the angle is just bad. 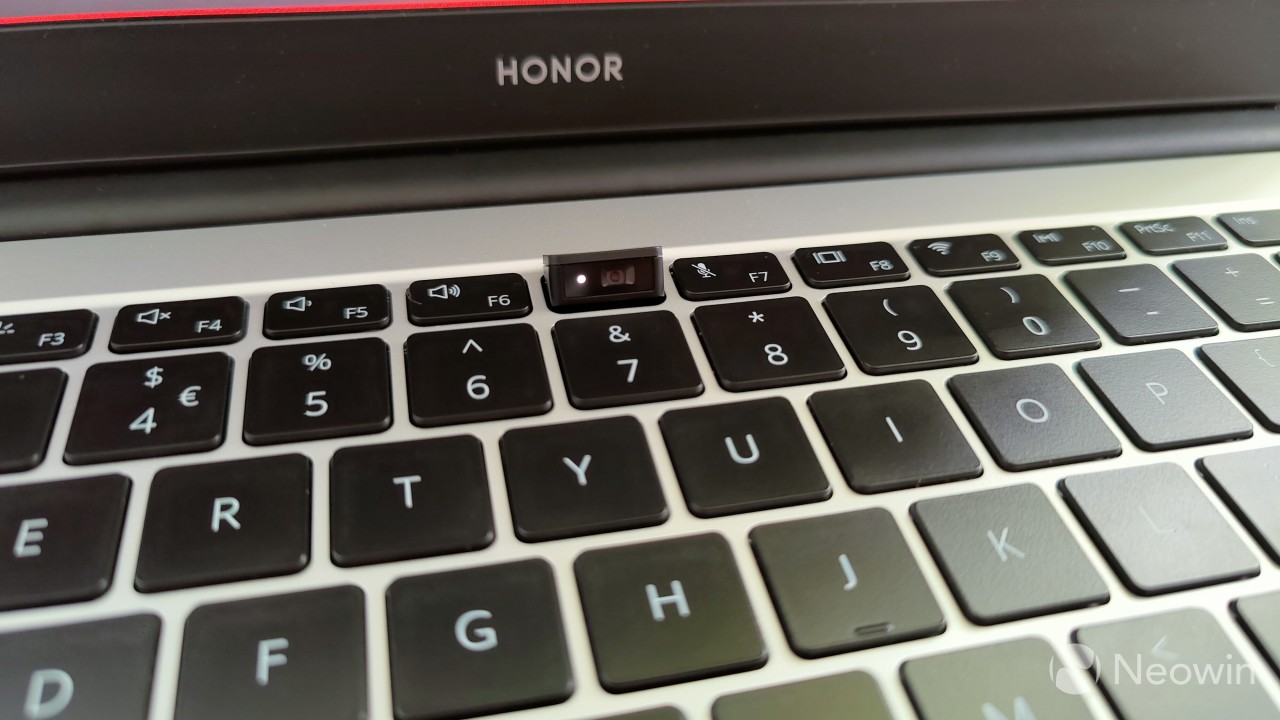 This is not a camera that you want to use, it’s only there if you really have to occasionally. I would rather just have a slightly thicker top bezel and a better camera. Also, the promotional materials for this laptop make it seem as though there’s a flash next to the camera, but there isn’t, at least on this model. You still won’t be visible in the dark.

The trackpad on the MagicBook 14 is truly fantastic, though. I first saw Precision drivers on a laptop with the Dynabook Tecra X50, but that was a very expensive laptop, and the trackpad was pretty small. Here, it’s perfect. For this price point, having Precision drivers isn’t something I expected, and it works just as wonderfully. I love all the gestures this enables and how well it works. It’s even better on the MagicBook because the trackpad is really big, and it’s super easy to do three and four-finger gestures on it. I’ve found it to become the fastest way to adjust the volume level on my laptop, for example, and I’ve gotten used to task switching and other gestures with it by now, too. It’s really fantastic and it almost makes up for the lack of a touchscreen. 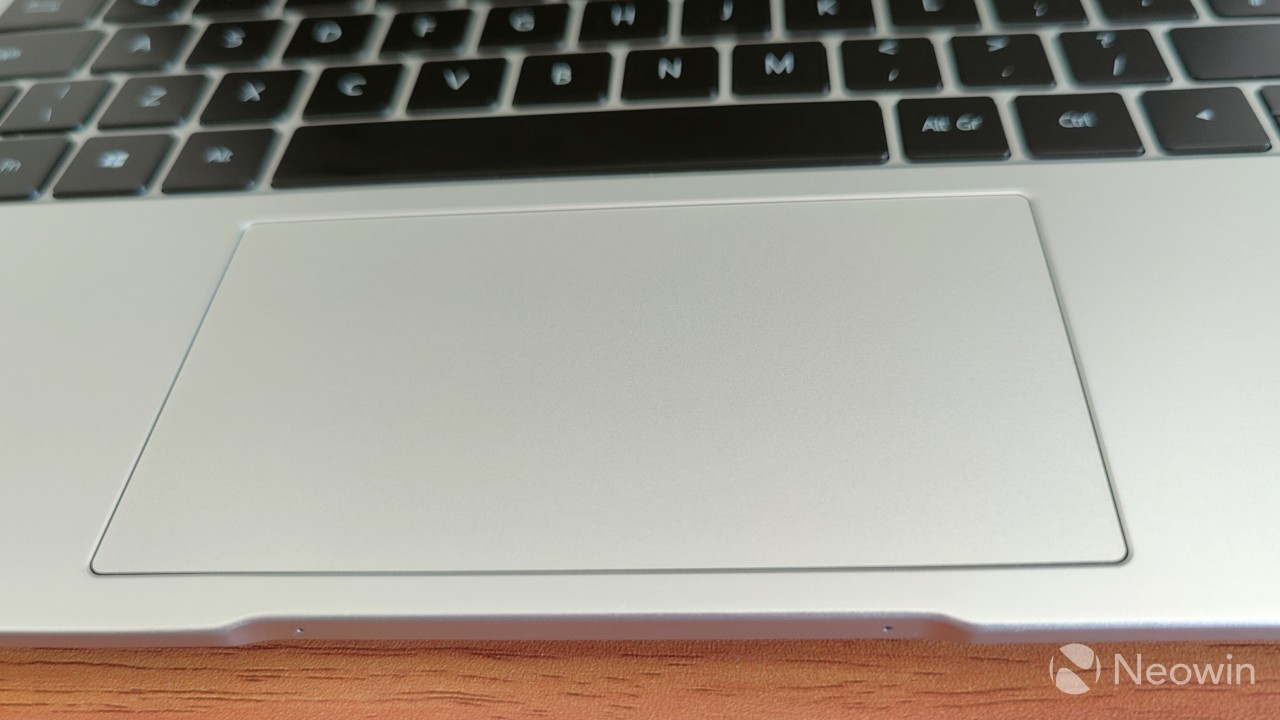 Aside from the camera, this is one of my biggest disappointments with the MagicBook 14. It’s been a while since I’ve used a laptop with a mid-range processor, so I’m not sure whether I should attribute this to the AMD Ryzen 5, but I’ve seen some issues that bother me. Out of the box, the Chromium-based Edge browser would sometimes go blank for a few seconds, especially if I was watching a video in one tab and browsing another. This was more frequent in Edge Canary, but the stable version suffered from the same problems, and I’ve never seen it before.

I updated the AMD drivers with the latest from AMD itself, and that seemed to solve that problem, but I’ve still seen a number of different issues with performance. Sometimes, the Start menu won’t open when I click the Windows logo, Windows Search becomes unresponsive to my mouse and only works with the keyboard, and certain tasks freeze up for a couple of seconds. It’s not a big enough problem that I would say it ruins my workflow, but it’s definitely noticeable.

I ran PCMark 8 and PCMark 10 benchmarks, and that brought about its own series of problems. The first time I ran the benchmarks, scores were suspiciously low, and after running PCMark 10, the computer just froze entirely and I had to reboot. A second run worked out a lot better, and results are in line with expectations.

It’s unfortunate that Honor went with AMD’s last-generation Ryzen processor here because Intel’s 10th-generation processors are now faster across the board. Ryzen 4000 series processors are also making their way to the market, which leaves the MagicBook in a bit of an awkward position.

Battery life on this laptop was fine, and it usually hovered at around seven hours with my typical usage, which involves writing, having a few tabs open in Edge, with an hour so of YouTube video in there. The power setting in Windows 10 is usually set to “better performance”, and brightness is usually around 50% or less. 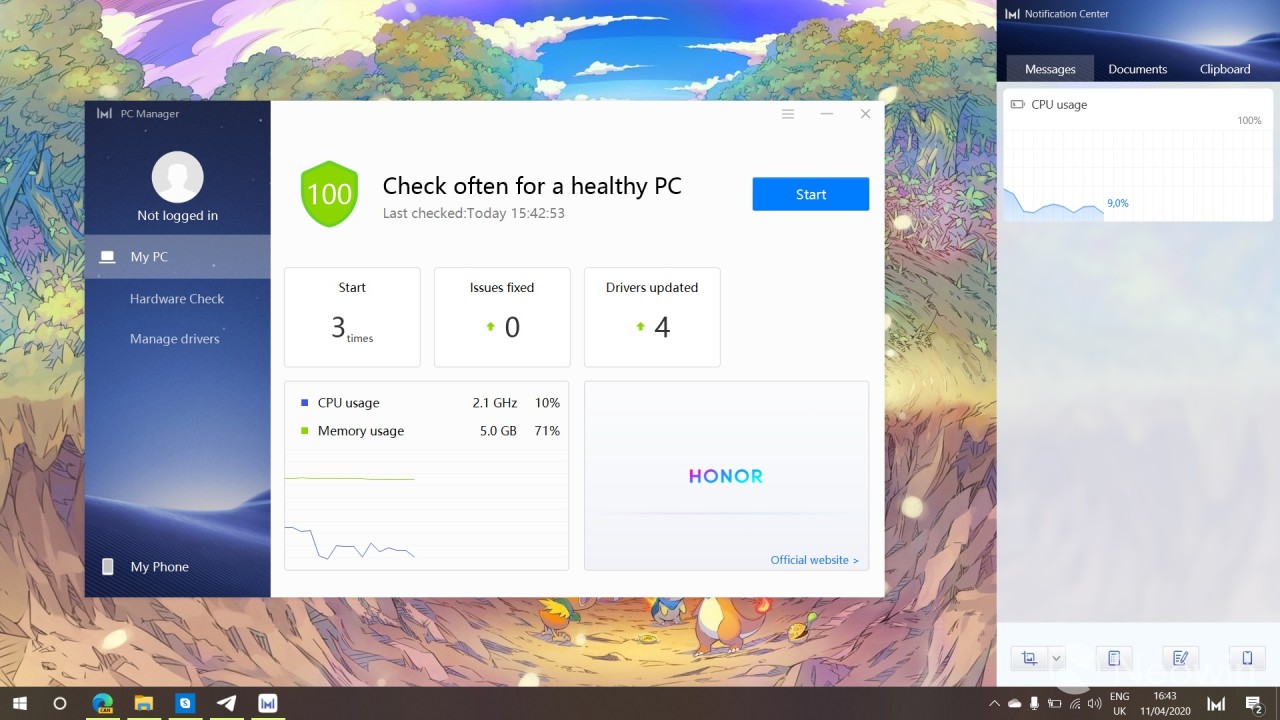 In terms of software, I have to appreciate Honor’s minimalist approach. The only Huawei/Honor-specific app is PC Manager, which checks for updates for your system drivers, provides a clipboard and recent document history, and, most notably, Honor’s MagicLink feature. Unfortunately, I can’t test this because I don’t have a Honor phone, but it essentially enables a seamless connection between your phone and laptop, making it easy to transfer files and even control your phone from your PC. I recommend you check out Rich Woods’ coverage of Huawei Share, the feature equivalent that you find on Huawei-branded laptops.

There are a few things I like about the MagicBook 14. I absolutely love the trackpad here, it’s a perfect combination of size and Precision drivers that makes it a joy to use. The display looks pretty great and sharp at this size and resolution, and I have no major complaints about the colors. Sound from the speakers is also better than I would have thought, it makes for a pretty good music listening experience. I also appreciate niceties like the fingerprint sensor that reads my fingerprint as soon as I press the power button, unlike recent offerings from Dell. 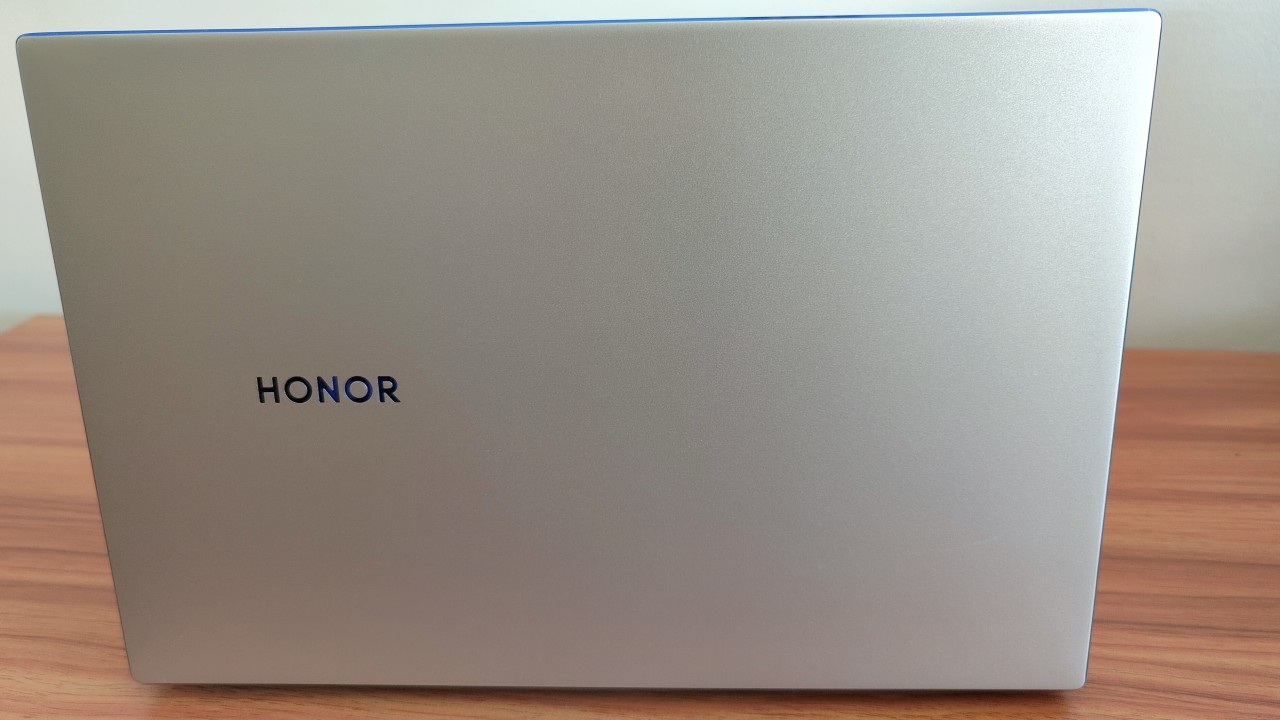 In the end, though, I feel a little disenchanted with it. Honor’s implementation of a webcam isn’t something I want to deal with any longer than I have to, it’s just terrible. And the performance issues I saw, while not deal-breaking, just feel off for a modern laptop. That could be the nature of mid-range processors, but I don’t feel great about these issues.

it is adequately priced, though, and while you can find similarly-specced laptops at similar prices, it’s common that they’re more expensive. Some of them also offer other features like Thunderbolt 3 (for Intel laptops), but the MagicBook may be worth considering.