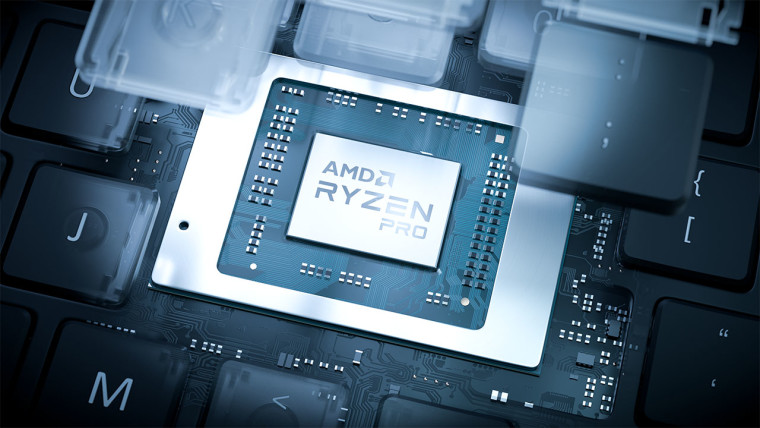 Today, AMD is announcing its Ryzen PRO 4000 series of processors, which are made for business laptops. They’re built on a 7nm technology and Zen 2 architecture, just like the consumer products under a similar name. What makes these different are security features, similar to Intel’s vPro lineup.

With AMD PRO Security, PCs with these new processors are qualified under Microsoft’s Secured Core PC initiative. It has AMD Memory Guard, which supports full memory encryption, and AMD says that it works with OEM partners to complement their own security features.

So, along with AMD Memory Guard and its Zen 2 architecture, you can get things like Sure Start, Sure Run, and Sure Click from HP. Sure Start checks the BIOS against a master copy and replaces it if it’s corrupted. Lenovo also has its own self-healing BIOS, along with its ThinkShield technology.

AMD says that the Ryzen 7 PRO 4750U is the fastest processor for thin business laptops, and when compared to an Intel Core i7-10710U, it scores 31% better on PassMark 9, 25% better on Geekbench 5, 32% on PCMark 10 Digital Content Creation, 9% better on PCMark 10 Productivity, and 14% on PCMark 10. Note that the Core i7-10710U is not a vPro processor, being that Comet Lake vPro isn’t announced yet (presumably, the Comet Lake comparison is because there will be no Ice Lake vPro), but it’s the hexa-core variant of the chip. The Ryzen 7 PRO 4750U is octa-core, of course.

The first PCs to ship with the AMD Ryzen PRO 4000 processors will come from HP and Lenovo. From HP, the ProBook x360 435 G7 and ProBook 445/455 G7 were already announced, but Lenovo today is announcing some new ThinkPads that will include the new processors.