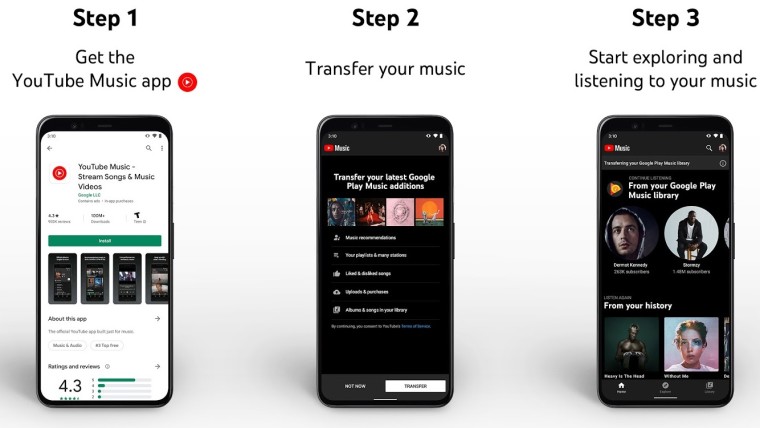 The process is seemingly pretty simple: once you install the YouTube Music app for Android or iOS, you’ll see a button to transfer all of your uploads, playlists, added songs and albums, likes, dislikes, and taste preferences over to the new service. YouTube Music’s recommendations will update with the new information right away, and Google will notify users via e-mail once their library has been transferred. The process is also shown off here:

In order to sway users to make the move, Google has been making improvements to YouTube Music over time. Playlists can now have up to 5,000 songs, up from 1,000, and if you’re uploading local tracks, it supports up to 100,000, double of what Google play Music allows. It’s also possible to listen offline and see music lyrics as songs play. Aside from that, there are over 50 million songs on YouTube Music, and features such as My Mix, Discovery Mix, and New Releases Mix should make it easy to find something to listen to.

Google Play Music also offered a podcast experience, and for those users, Google has also made it easy to transfer subscriptions and episode progress to Google Podcasts. The Google Podcasts app recently made its way to iOS, and Google has also introduced a Podcasts Manager tool for podcasters, making it the company’s go-to podcast service.

For now, those that prefer sticking with Google Play Music can still do so, but Google is planning to shut down the service later this year. The company says it will “provide plenty of notice” before that happens, so users have time to move their content over.