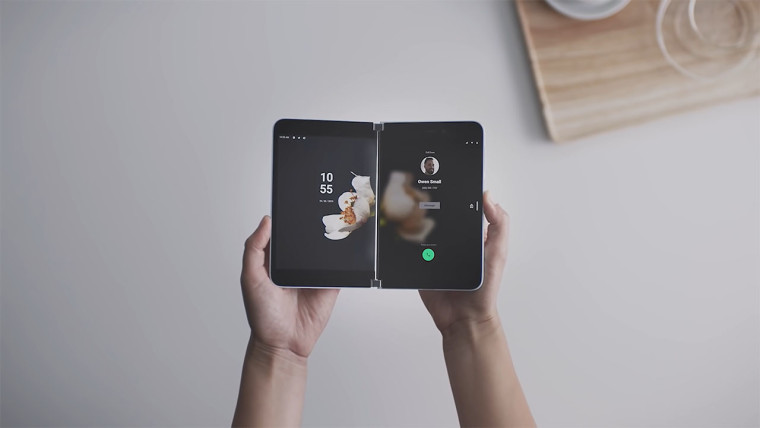 Microsoft’s Surface Duo will reportedly come with a Snapdragon 855, 6GB RAM, and more

Last October, Microsoft announced its new family of dual-screen devices, including the Windows 10X-powered Surface Neo and its Android smartphone, the Surface Duo. The Surface Neo is delayed now, but Duo is still on the way. And while Microsoft still hasn’t told us much about the actual specs, Windows Central’s Zac Bowden has the details.

For the most part, the specs are pretty mid-range, something that OEMs often settle on when it’s focusing on an innovative form factor instead. It’s going to include a Snapdragon 855 chipset, which is last year’s flagship SoC from Qualcomm. You’ll also find 6GB RAM and either 64GB or 256GB of storage. On top of that, there’s a single 11MP camera on the inside of the device.

While we know about the two 5.6-inch 4:3 1800×1350 screens, the report details that those two screens are AMOLED. It also comes with a 3,460mAh battery, and there’s no expandable storage.

To answer the question about the mid-range specs, the answer is simply that Microsoft can’t move as quickly as OEMs that are used to making smartphones. The Snapdragon 865 chipset requires that a phone include 5G, a requirement that Microsoft didn’t know about when it designed the device. But again, every other smartphone OEM has adapted to this by now.

That also doesn’t explain the other mid-range specs in the Surface Duo, such as 6GB of RAM and 64GB of storage in the base model. The 11MP single-lens camera is sort of due to the form factor of the device. There’s no camera on the outside, because there’s no screen to use as a viewfinder on the outside. That one camera doubles as a rear- and front-facing camera.

It seems as though the biggest question left is what the price will be. Microsoft isn’t known for making inexpensive Surface devices, but the PCs that it usually makes are usually premium. At this point, a dual-screen smartphone isn’t unique, with LG on its third generation.

How much would you pay for the Surface Duo? Let us know in the comments!