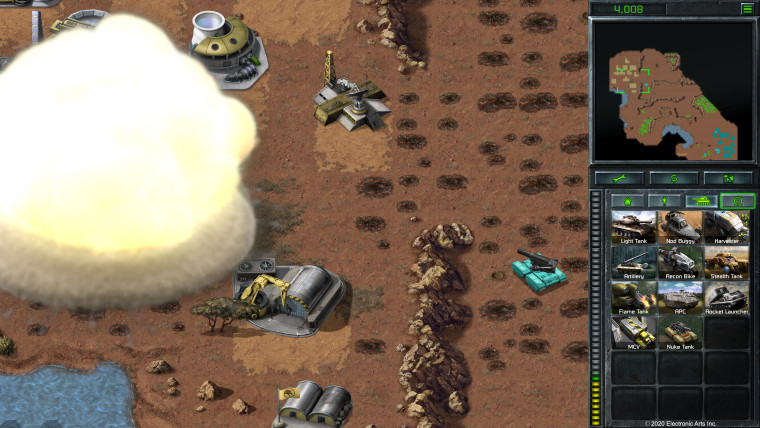 Today, EA gave another update regarding the upcoming Command & Conquer Remastered Collection, specifically about modding support for the two games in it, Tiberian Dawn and Red Alert. Surprisingly, it was revealed today that EA will be open-sourcing some key parts of the game.

The open-sourced material, “TiberianDawn.dll and RedAlert.dll and their corresponding source code,” will be under the GPL version 3.0 license, and will be released into the wild alongside the Remastered Collection’s launch on June 5. Regarding this move, EA producer Jim Vessella said that “this is a key moment for Electronic Arts, the C&C community, and the gaming industry, as we believe this will be one of the first major RTS franchises to open source their source code under the GPL.”

According to EA, the map editor that will ship with the games and the open-sourced DLLs will let users “design maps, create custom units, replace art, alter gameplay logic, and edit data.” To demonstrate what’s possible, the remaster developer Petroglyph had created a Mammoth Tank with a nuclear artillery cannon on top of it as a new modded unit. This fully playable “Nuke Tank” is seen above.

To help with the discovery of mods, EA has gone with adding Steam Workshop support to the Remastered Collection, where owners on Steam can simply subscribe to mods they want directly through the community hub. Those who own the game on Origin will need to manually install mods onto the install directory. Third-party resources like Nexus should make this process much easier, however.

The one piece of bad news in today’s announcement is that LAN Play won’t be a feature at launch, as testing the capabilities of it has been an issue during these social distancing times for the developer. It will be a high priority feature to get added post-launch.

Command & Conquer Remastered Collection is slated to launch on June 5. The dual-game bundle is now available for pre-purchase on Steam and Origin for $19.99. Origin Access Premier subscribers will also gain access to the title on day one.