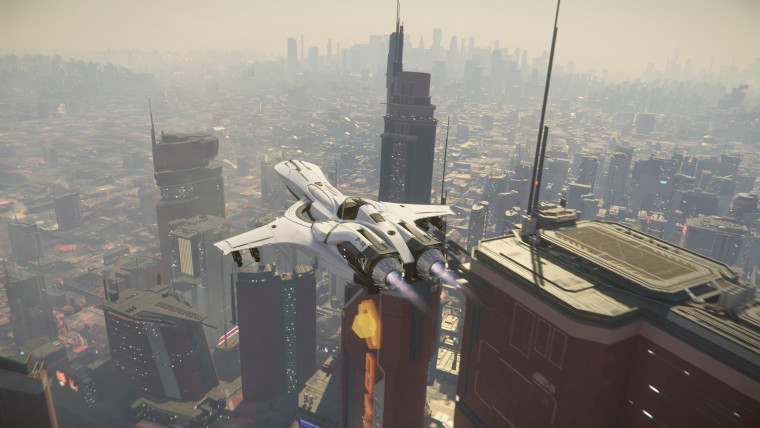 Star Citizen free fly events come up several times a year to give prospective citizens a chance to dip their toes into the ambitious project for free, and the latest one has now kicked off. Dubbed Invictus Launch Week, it offers event-goers ships and vehicles to trial from in-game manufacturers, and new batches will roll out as the convention continues on.

The event is slated to run until June 1, showcasing ships from fighter, freighter, recon, luxury, quantum enforcer, and other classes, as well as various ground vehicles. Day one of the event will bring forth ships from RSI, Tumbril, and Origin Jumpworks companies, followed by Anvil Aerospace, Aegis Dynamics, ARGO, MISC, CNOU, and finally Drake Interplanetary product appearances in the following days. Head here for a full schedule of which ships will be available to free fly when.

Players will need to head towards the Area18 landing zone on planet ArcCorp to get to the in-game convention, which is taking place inside the Bevic Convention Center. The easiest method new players may use to reach the convention is spawning at Area18, heading to the CityFlight Transit station, taking a shuttle to the Bevic Convention Center, and following the “Invictus Launch Week” signs. All in all, it should be around a 15-minute trip.

Alongside providing the ability to charter test flights, the event also has a Hologram Hall that offers looks at upcoming ships as well as freighters too large to fit inside the convention hall. New players can sign up for a free account through here, and may also use this resource, set up by the developer, to help with navigating the title.

The latest major update to Star Citizen​​​, Alpha 3.9.0, arrived last month, delivering a prison facility alongside an automated incarceration system – with escape missions -, new moons, survival elements like extreme environments, hunger, and thirst, among other features. All of these are available to new players coming into the free fly event as well.