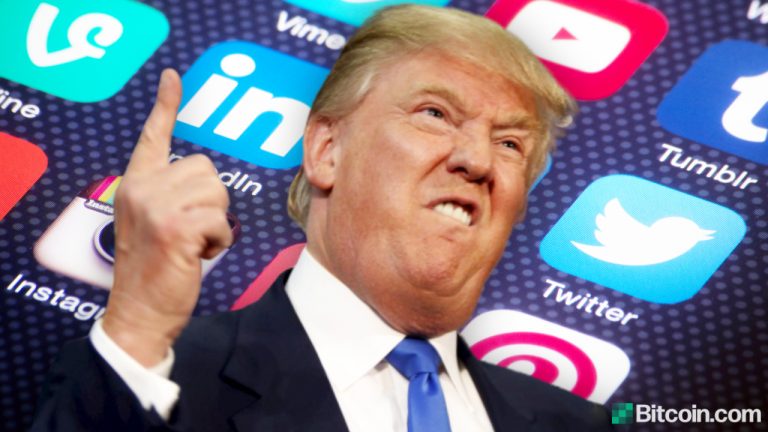 A row with Twitter has provoked U.S. President Donald Trump to threaten to close down social media platforms. This follows Twitter tampering with Trump’s tweets to alert people to fact check his claims. Trump is further outraged by Twitter’s use of “fake news” sources to fact check his tweets. Meanwhile, some people are happy with Twitter’s action.

Trump Warns Social Media Platforms: Clean Up Your Act or Be Shut Down

U.S. President Donald Trump on Wednesday threatened to regulate or shut down social media companies after Twitter added a warning to two of his tweets, alerting readers to fact check the president’s claims. Outraged, Trump tweeted back at Twitter that the company “is now interfering in the 2020 Presidential Election.” He added: “They are saying my statement on mail-in ballots, which will lead to massive corruption and fraud, is incorrect, based on fact-checking by fake news CNN and the Amazon Washington Post.” He further exclaimed:

Twitter is completely stifling free speech, and I, as President, will not allow it to happen … Republicans feel that social media platforms totally silence conservatives voices. We will strongly regulate, or close them down, before we can ever allow this to happen.

“We saw what they attempted to do, and failed, in 2016. We can’t let a more sophisticated version of that happen again,” Trump declared. “Just like we can’t let large scale mail-in ballots take root in our country. It would be a free for all on cheating, forgery and the theft of ballots. Whoever cheated the most would win. Likewise, social media. Clean up your act, now.”

On Tuesday, Trump tweeted several times about mail-in ballots. Two particular tweets read: “There is no way (zero) that mail-in ballots will be anything less than substantially fraudulent. Mail boxes will be robbed, ballots will be forged & even illegally printed out & fraudulently signed. The governor of California is sending ballots to millions of people, anyone living in the state, no matter who they are or how they got there, will get one. That will be followed up with professionals telling all of these people, many of whom have never even thought of voting before, how, and for whom, to vote. This will be a rigged election. No way.” 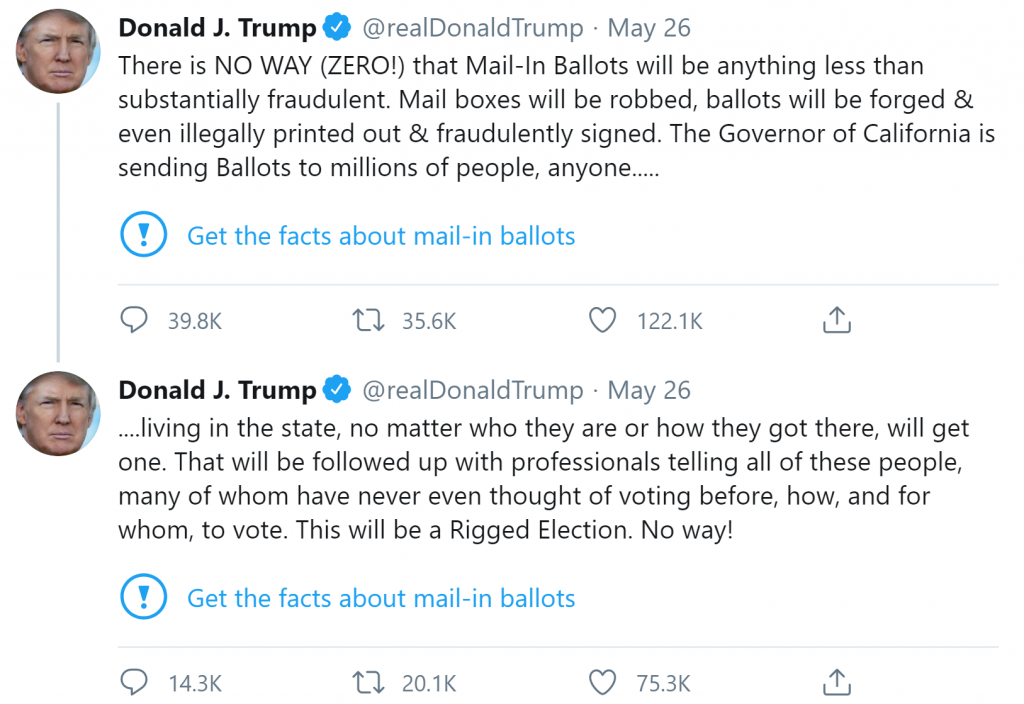 However, Twitter for the first time attached a message that reads “Get the facts about mail-in ballots” to Trump’s tweets, linking to a page disputing the president’s accuracy. The page states that “Trump makes [an] unsubstantiated claim that mail-in ballots will lead to voter fraud,” citing news sources Trump often calls “fake news.” According to the page, Trump’s “claims are unsubstantiated, according to CNN, Washington Post and others. Experts say mail-in ballots are very rarely linked to voter fraud.”

Brad Parscale, Trump’s 2020 reelection campaign manager, issued a statement on Tuesday in response to Twitter’s action. “We always knew that Silicon Valley would pull out all the stops to obstruct and interfere with President Trump getting his message through to voters,” he wrote, adding:

Partnering with the biased fake news media ‘fact checkers’ is only a smoke screen Twitter is using to try to lend their obvious political tactics some false credibility.

Comments flooded Twitter on the matter, with some criticizing Twitter’s action for editing any tweets at all while others are glad that Trump got fact-checked. One user commented: “Twitter made a huge mistake. They have now injected themselves into a U.S. election and decided to become editorialists, rather than a platform. All platform protections should be immediately revoked and Twitter should be treated as a publisher. They did this to themselves.”

Another user opined: “So glad that Twitter fact checked the lies spew by Donald Trump, if they have done that early we could have avoided listening to POTUS lying about the coronavirus and saved over 100,000 American lives.” A third user expressed, “Frankly, it’s appallingly that Trump has not been banned across all platforms for his constant lies and dangerous misinformation. We all have to follow the rules,” adding:

Besides Twitter, other centralized platforms, like Youtube, have been known to censor users’ posts, prompting them to look for decentralized alternatives, such as Zeronet, Mastodon, and Gab.

What do you think about Trump’s threat and Twitter fact-checking Trump? Let us know in the comments section below.

The post Trump Threatens to Close Down Social Media Platforms After Twitter Tampers With His Tweets appeared first on Bitcoin News.