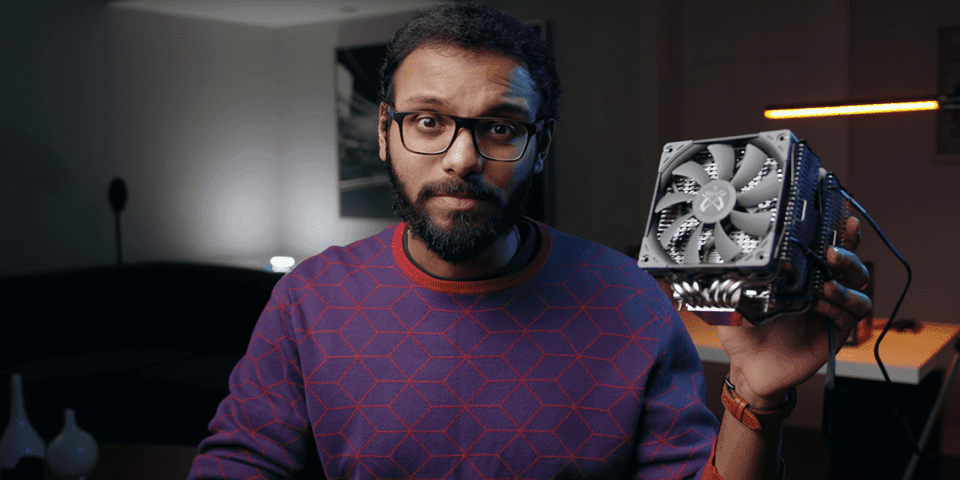 A CPU Cooler You NEED To Know About! Scythe Fuma 2 Review

Well it looks like air coolers might be a regular and reoccurring theme for us from now on, if we find cool stuff obviously. But then again it didn’t really work out that well for the Corsair A500 that we checked out recently. The subject for today’s review actually comes from your suggestions, and it is none other than the Scythe Fuma 2 air cooler. I actually have to make sure that I don’t cut myself because this thing is ridiculously sharp, and I’m actually always very careful when holding this cooler because otherwise I’m pretty sure I’m going to end up with a lot of cuts. 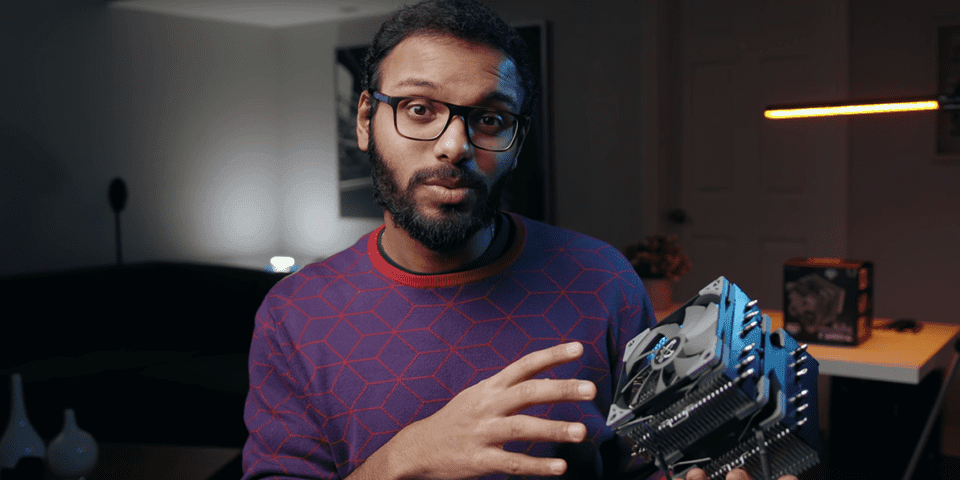 You might be ask what makes the Fuma 2 special? Well it’s focus is on silence and compatibility, but it’s also supposed to have some wicked performance due to its pretty unique fan setup. The best part is that it costs $60 USD, which is a lot less than a lot of the other coolers that we have tested. I’m pretty excited about this one because it would be useful to have an alternative to some of the most popular heatsinks out there in the market. I guess the only way to find out is to put the Fuma 2 up against our super hot running test system and see what it performs like.

I would usually skip over what’s inside the box, but Scythe actually includes a full list of goodies. There is a nicely braided fan splitter cable, a magnetic screwdriver, and a tube of thermal compound with enough for at least three applications. There are also three fan brackets, and I’m going to explain why this is so important.

Out of the box Scythe includes one thin 15mm fan and one standard 25mm fan. The slimmer one is there to make sure that there are no issues with memory compatibility, but if your system has enough clearance you can use the extra bracket to replace it with a higher performance one. Or you could just keep the stock fans and add a third fan to really maximize performance. However, there’s more to this fan set up then what you might think. Even though they both move air in the same direction the front fan spins in a counterclockwise direction while the middle one runs clockwise. According to Scythe this actually increases static pressure and allows the two 1200 RPM fans to perform more like they are going at much higher speeds. I can’t wait to put that claim to the test.

Moving onto the heatsink itself, and it’s a pretty straight forward dual-tower design with aluminium fin arrays that are capped with a plain black metal. There is also six heat pipes, which happens to be two more than Corsair uses on their $100 A500 cooler. Yes, I’m still ranting about that thing. The other nice thing to see here is the flat base that’s machine to pretty high standards. There is also no cheaply designed heat pipe direct touch base here, which is awesome.

I have to give compliments to Scythe, I’m loving the stealthy aesthetic of this cooler once the fans are installed. Don’t worry we will ruin it with Noctua fans a bit later. Speaking of Noctua, the Fuma 2’s size is pretty much the same as the NH-U12A, though it is a bit wider, but that also makes it a lot more compact than the NH-D12. As for the installation process, well I think it’s one of the best around. I actually prefer it over anything from Noctua or be quiet! or nearly anyone else.

I won’t go through every installation here since that would take forever, but let’s just say that the only difference between platforms is that there is a backplate that’s provided for Intel LGA775, LGA1150 series, and LGA1366 sockets. Whereas on AMD systems you will need to reuse your motherboard’s backplate. Aside from that Scythe provides a system of standoffs and crossbar mounting plates that’s compatible with every platform. Basically, after these standouts are installed, you just screw down the mounting bar and up to this point, it’s very similar to Noctua’s design. However, when it comes to installing the cooler there’s one major difference that makes this thing so much easier. Instead of there being threaded rods on the crossbars, there’s a hole with angled guides and this helps the heatsink’s pre-installed screws slide right into position without any hassle. This is a brilliant and easy system and I love it since you can easily get the best possible mount. I also have to give a ton of credit to Scythe for focusing on compatibility. It’s pretty obvious that they did some serious homework to make sure that the Fuma 2 worked in almost every condition. However, I do have to mention that this cooler is meant to be only mounted in a left and right direction and not up and down.

On a platform like Intel’s LGA2066 with quad-channel memory the elevated heatsink allows it to clear even super tall memory. Meanwhile, the slim fan means every memory slot can be populated, but you need to be aware that the tolerances are super tight. I noticed that the lower fins do make contact with the nearby memory module. Another to note is the ASRock X299 CLX that I used here has a ridiculously tall VRM heatsink and even that wasn’t a problem. The only slight issue is if you want to mount a third fan on a system that has tall memory module or VRM heatsinks since it will need to be pushed upwards. Moving on to AM4 and there’s no problem here either since Scythe swept the Fuma 2′ heat pipes forward to make sure that the main fins are far away from the memory slots. However, don’t expect to install a full-size second fan if your memory slots are fully populated cause there’s just not enough space. 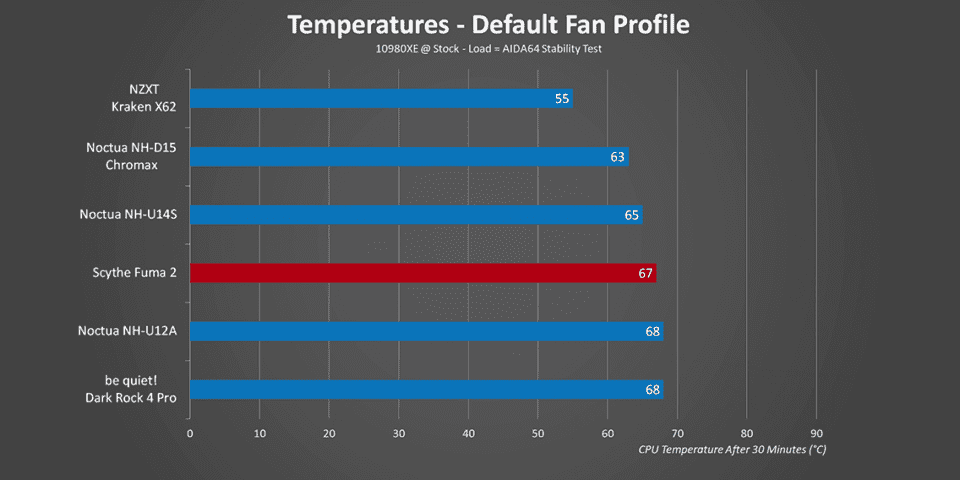 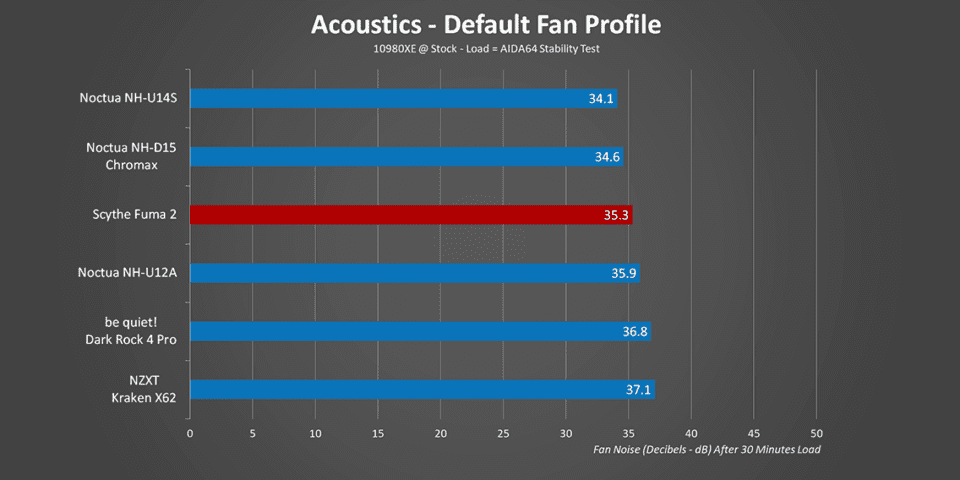 Okay, so now onto performance, but before I get into that I do want to quickly go over a few things. First up, it is very important to note that the two fans on the Fuma 2 are set to operate at a maximum of 1200 RPMs, which is a lot slower than anything else we have tested before. The second thing is that you can and should read our testing methodology to see how exactly we conduct our CPU cooler testing. Starting things off with stock speed testing on the Core i9-10980XE, and it looks like the Fuma 2 is able to keep up with some of the best coolers available. Now it’s important to take note that this CPU is running around 165W TDP, which happens to be the worst case scenario for many current Intel and AMD CPUs. This proves that Scythe’s $60 heatsink can effectively cool literally any processor currently available. However, the amazing thing is that it competes with the Noctua NH-D15 and it beats the NH-U12A in terms of acoustics.

Even with the fans operating at 1000 RPMs, it’s really competitive with heatsinks that cost quite a bit more. You should pay special attention to the Noctua NH-U14S since it costs only a few bucks more than the Fuma 2. At 1000 RPMs Scythe’s counter-rotating fan design seems to be making a pretty big difference, since this happens to be one of the quietest CPU coolers that we have come across. At full fan speed, the Fuma 2 hits about 58°C, which is one of the lowest temperatures, but its fan speeds are a good 300 RPMs lower than the NH-D15 and the NH-U14S. This obviously means that it just kills everything else in noise testing by a long shot. I can’t highlight this enough, when it comes to performance versus noise, the Fuma 2 is literally in a world of its own.

Now it’s time for overclock testing and the Core i9-10980XE clocked to 4.5GHz gets lava hot. On the positive side, Scythe was able to design this cooler well enough that it didn’t cause CPU throttling due to high temperatures, but 97°C is still pretty high. Also, the decibel results proved that it was running at full fan speed at the test end, but honestly it’s just so damn quiet. At a constant 1000 RPMs, it still technically passes and that’s really impressive. Finally at 100% fan speed, the Fuma 2 actually manages to beat the NH-U14S and it runs pretty close to the NH-U12A. Now remember it’s pulling these numbers at much lower noise levels and it only costs $60. 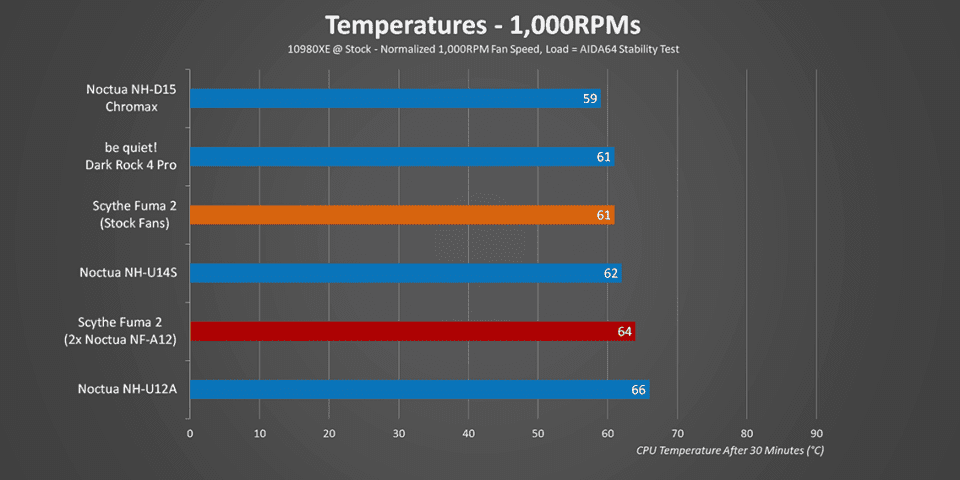 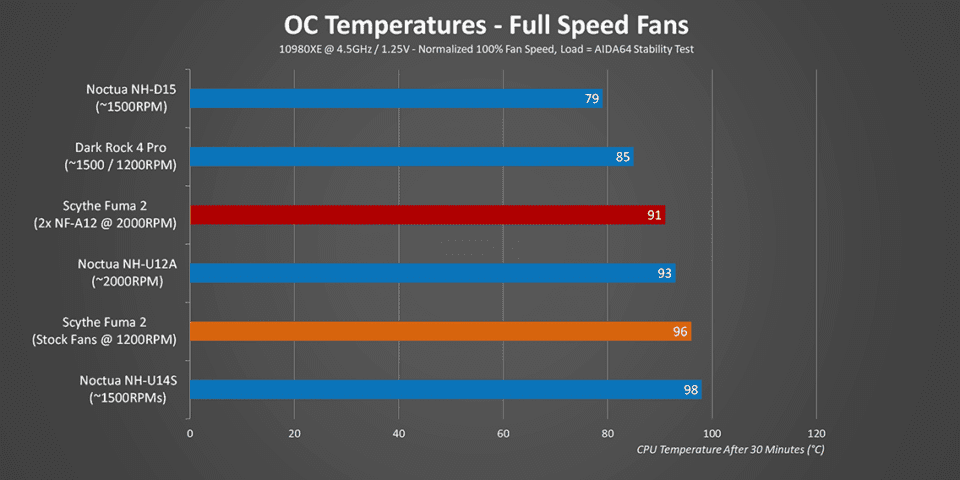 I think it’s safe to say that Scythe has designed a really good air cooler for $60, but I’m not willing to leave this review here without some more testing with different fan configurations. Let’s start things off with two Noctua NF-A12x25 fans, and the results are really amazing. It proves that Scythe closely designed their heatsink and fans in parallel. At stock settings and a constant 1,000 RPM, the Fuma 2’s regular setup actually wins. At full speed the dual Noctua setup pulls ahead, but remember two of those Noctua fans will be much louder than Scythe’s stock fans ad they cost just as much as a brand new Fuma 2. I really don’t think spending all that money on upgraded fans really benefits this cooler. 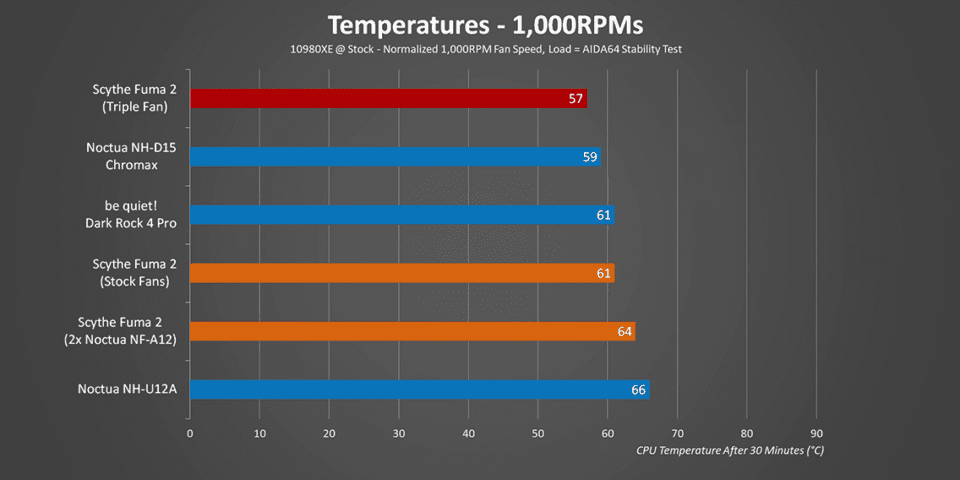 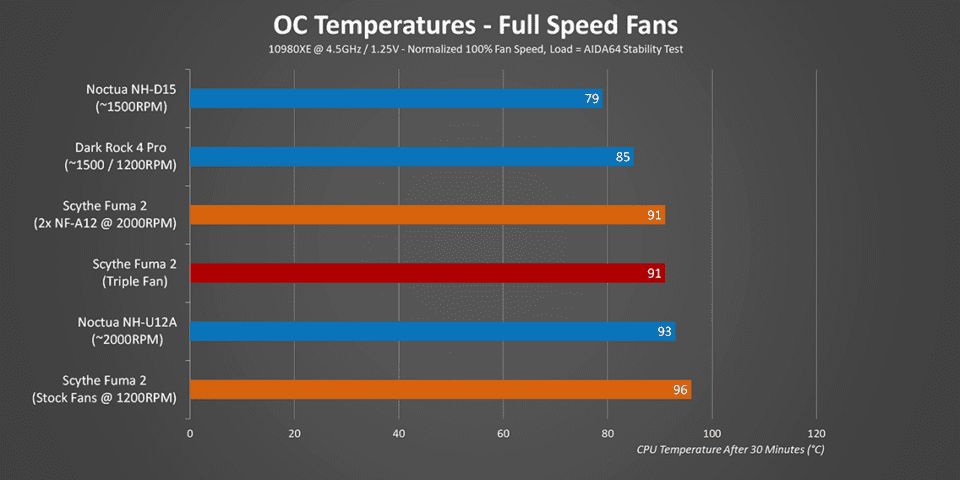 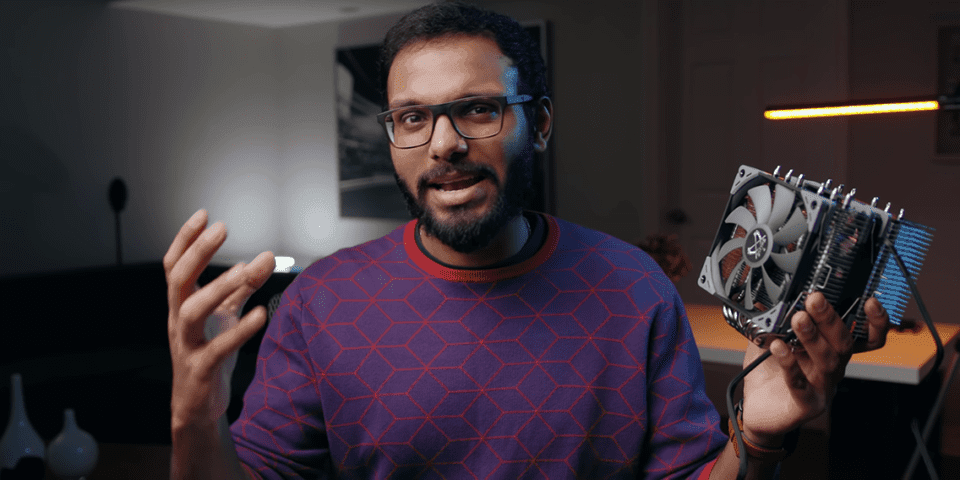 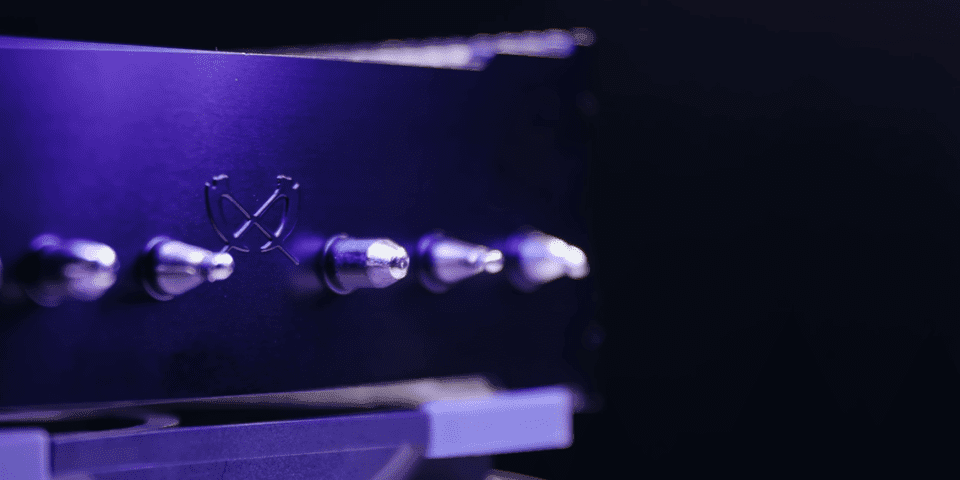 It’s time to wrap this up, and it should be clear by now that the Scythe Fuma 2 impressed the heck out of me. It’s the lowest price cooler in our charts and it competed really well against the alternatives that cost $40 more. If you’re running a more basic system than us, say for instance you’re running an Core i9-9900K or AMD Ryzen 3950X, this should be your go-to cooler. You are actually better off spending the extra $40 on perhaps a better or bigger memory kit or a better GPU. 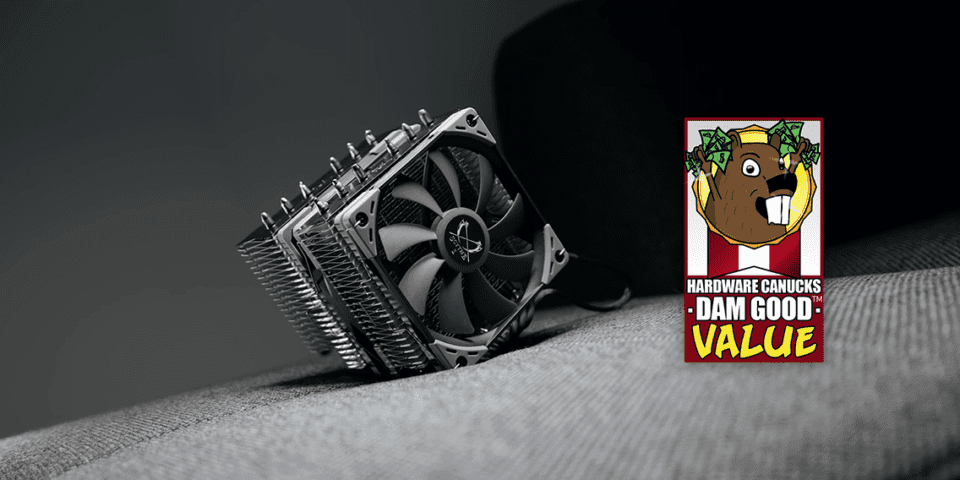 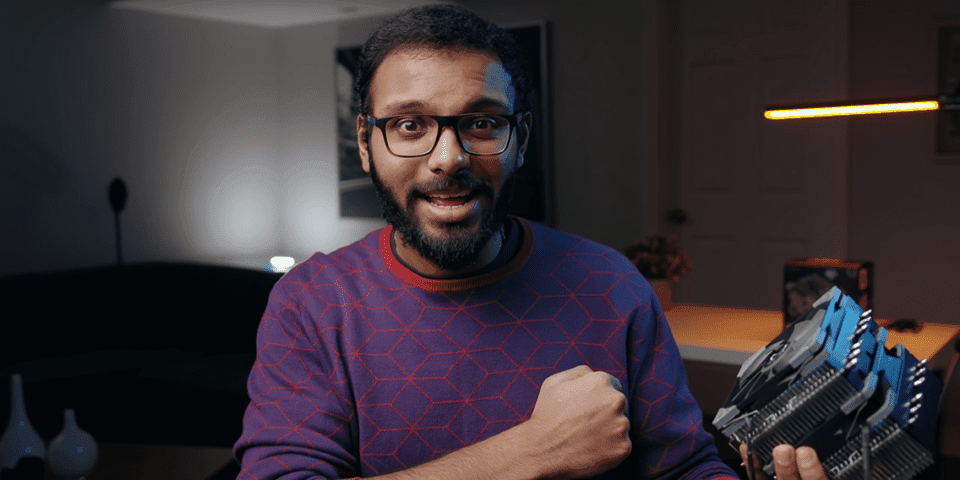 Naturally, this cooler couldn’t hit extreme cooling levels with the overclocked fire-breathing Core i9-10980XE, but that was expected since Scythe designed it for silence before performance. Did they accomplish that? Yeah, they certainly did. Therefore, I’m going to do something that I haven’t done in a really long time and actually give the Scythe Fuma 2 the Hardware Canucks Damn Good value award. So were you impressed with the Scythe Fuma 2? Also, what do you think of the name Scythe? I’m actually really in love with that name, because there’s something so stealthy about that also. I’m really glad that I didn’t cut my fingers on this cooler, because that’s what a real scythe would do. Thank you so much for reading.