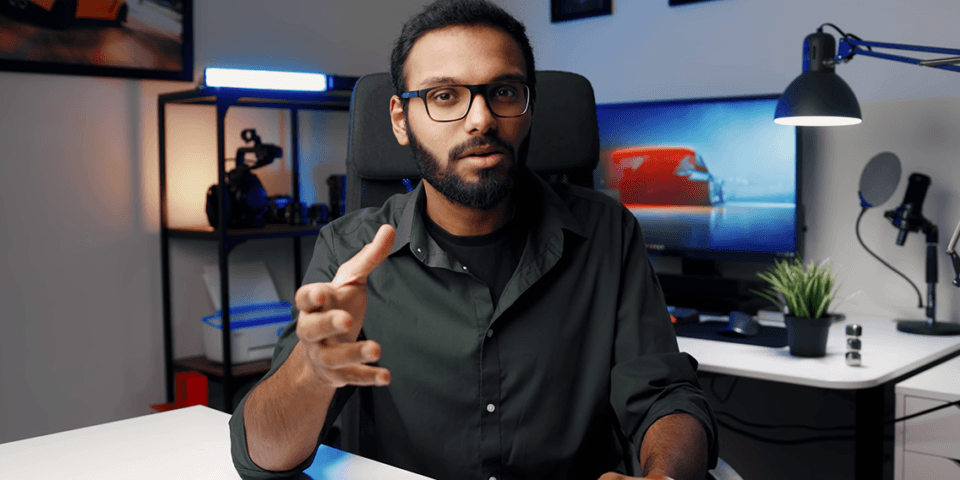 The last year has definitely been interesting for Intel, or more specifically it has been a damn mess. AMD clobbered them in the desktop market, Ice Lake ended up underperforming, and the new Comet Lake CPUs for notebooks were more or less the same as their predecessors. Just a few weeks ago we got our first taste of AMD’s mobile Ryzen CPUs and their performance was just through the roof, which will put Intel into even more trouble. Now throughout that whole time people have been asking for a desktop refresh since Coffee Lake has been around for more than a year now. Today we finally have an answer, later this month Intel will be launching a load of new Comet Lake 10th gen CPUs for the desktop side. The story basically aligns with what we saw on Comet Lake processors for notebooks, which means that we are going to get more cores, higher frequencies, a new socket, a new platform (kind of…), and some interesting prices too. 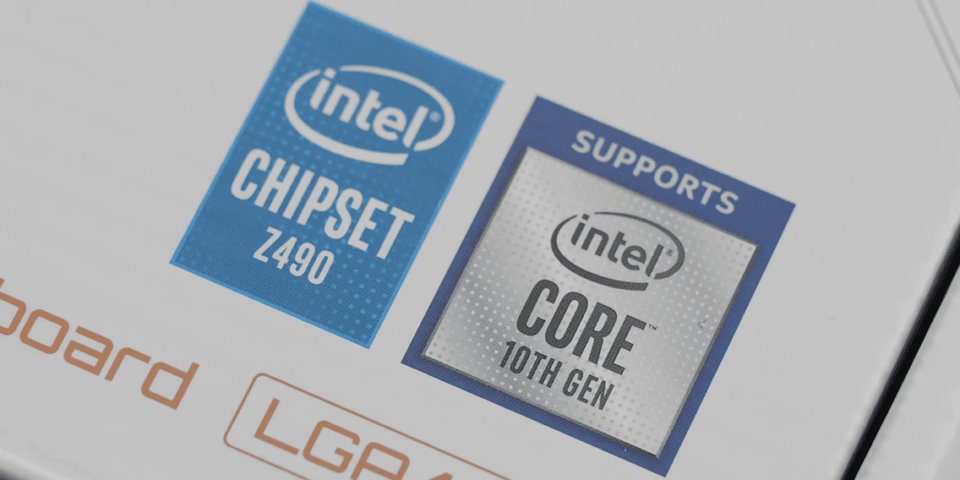 What’s going to be clear in this article is that Intel is basically copying what AMD did back in the FX days. You see back then AMD was still using an old manufacturing process, and as a result they had to ignore thermals and power consumption in order to achieve higher frequencies. It looks like history is about to repeat itself, but this time it’s coming from Team Blue. After burying their heads in sand, foregoing any serious price cuts for Coffee Lake, and pretending that AMD didn’t exist, is Intel going to wake up or is it too late to stop bleeding against Ryzen? Let’s find out.

I want to start things off with the most important thing and that’s the new socket called LGA 1200. Regrettably, 8th and 9th gen processors won’t be compatible with the new motherboards and the new CPUs can’t be installed in the current LGA 1151 motherboards. Most of those additional pins are to power the higher-end 10-core CPUs, but we are told some are also reserved for additional functionality sometime down the road. There is some good news though, usually Intel keeps their sockets around for two CPU revisions, which means technically these new motherboards should be compatible with Intel’s the next generation of processors. However, there is just no real sense investing in a new platform if you plan on upgrading so quickly, it just doesn’t seem practical. I will get into the new Z490 motherboards as well as the LGA 1200 socket a bit later on, but for now let’s focus on these new CPUs. 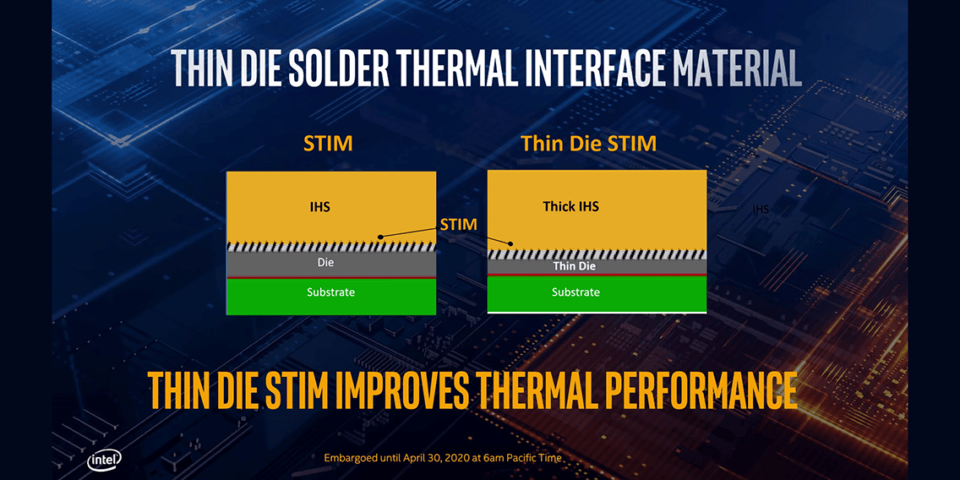 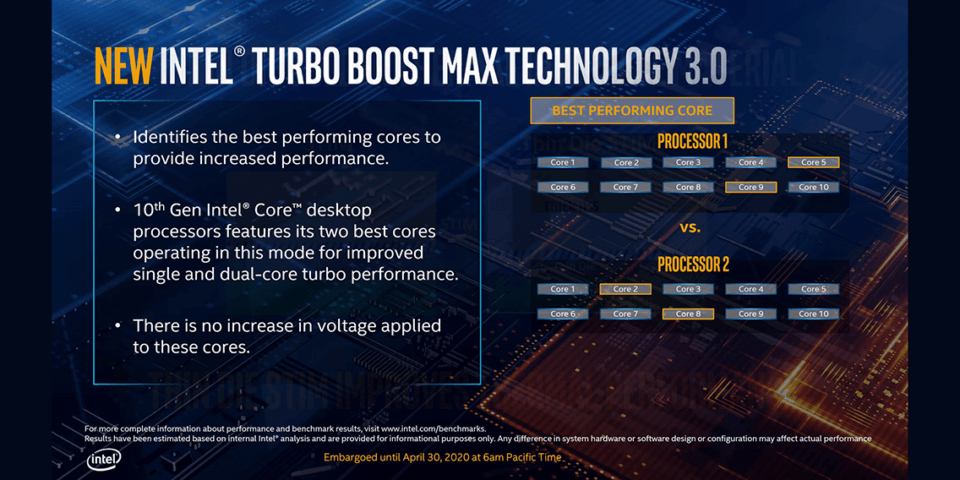 Is there anything really new? Well, no, not really since they still use the same architecture as Coffee Lake, but it’s been optimized to deliver higher frequencies. In order to deliver those frequencies more consistently, Intel needed a way to better manage temperatures and that meant moving to a thinner CPU die that’s topped by a soldered thermal interface material and a thicker IHS to dissipate heat more evenly. Also, some of these refreshed CPUs will have access to Turbo Boost Max 3.0, which singles out the processor’s two best cores and then boosts those two to higher speeds without increasing voltages. 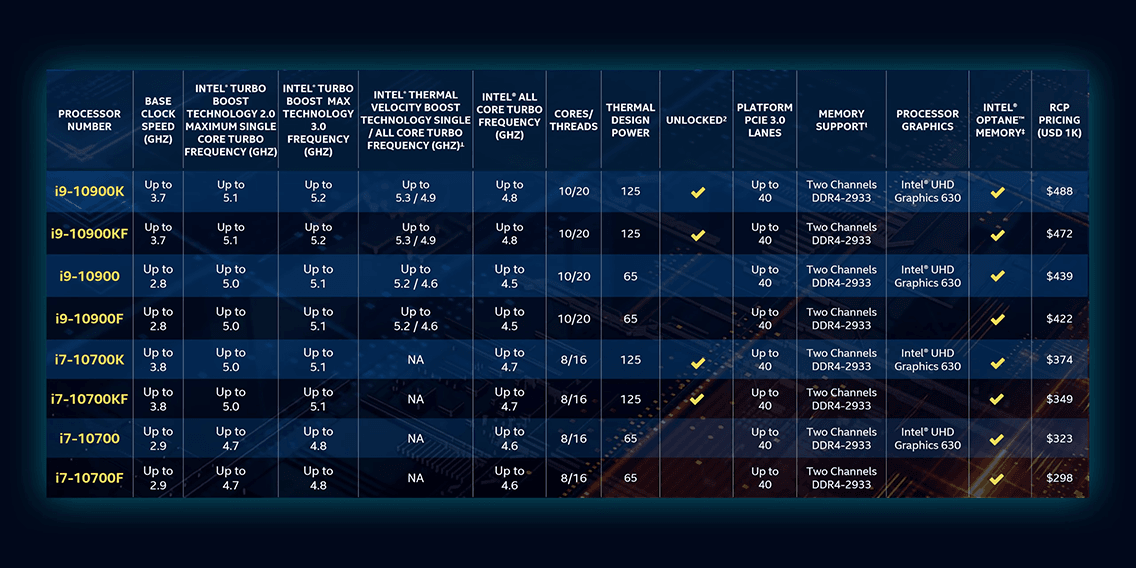 And as for how well that translates into the lineup, well every processor basically has four different sub-models. There is the K which includes an IGP and overclocking, the KF that has exactly the same speeds but removes the IGP and cost a bit less, and any CPU without a letter at the end is includes an IGP and a lower TDP with reduced clock speeds. Finally, there is an F model with identical speeds as the more efficient version, but its graphics core is disabled. As usual, only the K series CPUs can be overclocked. Some things you will see in common on all of these processors are memory speeds of DDR4-2933, the same 40 platform PCIe 3.0 lanes as Coffee Lake had, and the same old UHD Graphics 630 IGP. So yes, Comet Lake is basically a refresh of 9th gen Coffee Lake. 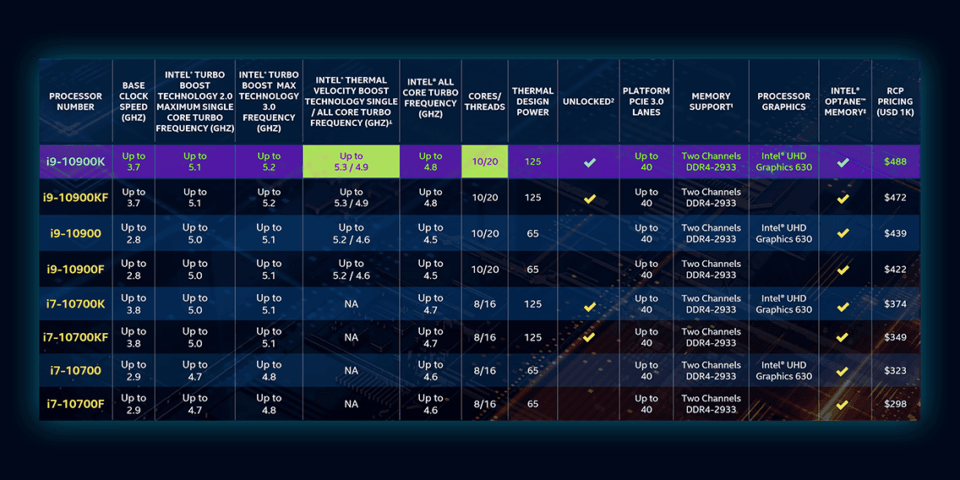 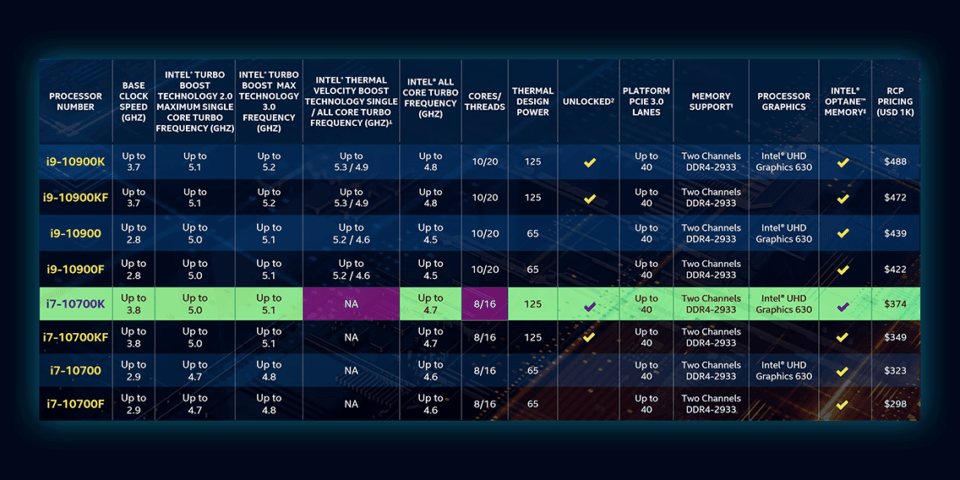 Starting right at the top is the i9-10900K, which has a 10-core/20-thread layout and it can hit some pretty insane speeds of up to 5.3GHz when two cores are active. To hit those speeds with 10 cores, Intel needed to up their TDP from the i9-9900K’s 95W watts up to 125 watts, and we all know that number is probably on the low side. The other high-end CPU in this lineup is the i7-10700K, which has 8 cores and 16 threads and oddly enough it doesn’t have Thermal Velocity Boost like i9-10900K. Either way, this is basically a i9-9900K with higher frequencies and lower pricing. What you will generally see is Intel trying to align their Core i9 with Ryzen 9 CPUs, the Core i7 with Ryzen 7, the Core i5 with Ryzen 5, and so on.

Let’s talk about that pricing, because Intel is trying to be a bit more competitive on that front, but it’s still going to be a huge uphill battle against AMD. You see the i9-9900K has remained pretty much constant at $490 to $500 through its lifetime, and it got killed on the value front by AMD. Now Intel is offering 2 more cores and 4 additional threads for the same price, which means the i9-10900K ends up competing against the Ryzen 9 3900X. That AMD beast has 24 threads, but Intel is betting that their higher clock speeds end achieving better gaming performance than Ryzen. Personally, I think the lower price market is going to see some really interesting battles as Intel’s Core i7 hits back at the Ryzen 7 series by finally enabling hyper-threading on the Core i7, as they always had prior to Coffee Lake. The i7-10700K offers the same number of cores and threads as the Ryzen 7 3800X. Technically it also does so at a slightly lower price, but it looks like Intel is competing with a 3800X’s suggested price and that CPU has actually been selling for between $330 and $350 for months now. 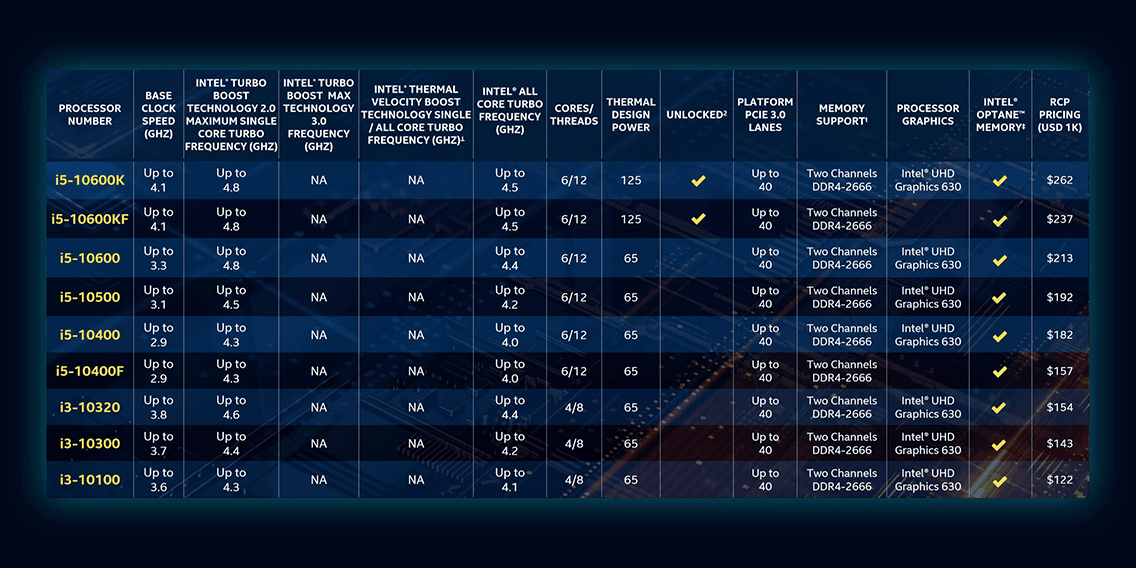 Moving on to the Core i5’s and the Core i3’s and things get a bit weird. First of all, none of these processors have Turbo Boost Max 3.0 technology, which means their highest clock speeds will only be achieved with a single core active. Also for whatever bizarre backwards reason Intel decided to reduce official memory support down to DDR4-2666. I just don’t get that choice, even the Comet Lake notebooks we checked out recently – and all the Core i3 and Core i5 mobile processors – have support for DDR4-2933. Yes, the DIY crowd can push higher memory frequencies thanks to XMP profiles, and Intel does argue that higher memory frequencies aren’t necessarily needed for lower-end processors, but to me all of this is just really odd. Either way, it’s really amazing to see AMD push Intel really hard to increase core counts by enabling hyper-threading on all of their Core i3 and Core i5 CPUs. Unfortunately, the i5-10600K is the only one that is unlocked, so it looks like Intel still wants to limit overclocking access to their higher-end CPUs.

Let’s look at a few comparisons. As you can see, Intel has progressed from 6-core CPUs with SMT disabled to something like the i5-10600K, which is supposed to target AMD’s Ryzen 5 3600X. The problem here is the same one I mentioned before. A lot of AMDs mid-tier processors are selling for much less than they were launched for, so while the Ryzen 5 was $250 it’s now closer to $200 and that means the i5-10600K ends up sitting between the 3600X and 3700X. The last CPU that I really want to focus on is the i5-10500, which also has 12 threads and that’s a big improvement over the i5-9500. It is going head-to-head with AMD’s Ryzen 5 3600, which still sells for around $190. This duo could be a really interesting head-to-head comparison, so let us know if you would be interested in that. 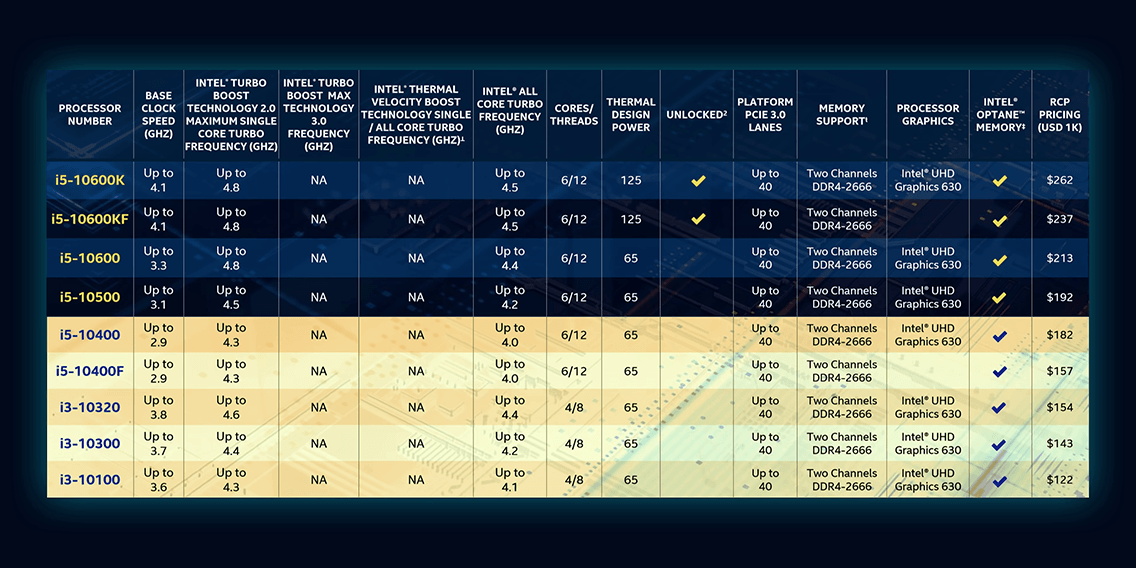 Moving down the list and there is a massive log jam of four different Intel processors between $125 and $185. Intel is obviously doing this since in region AMD doesn’t really have anything available. The closest they have is the $120 Ryzen 3 3300X that is launching next week. I’m guessing that Intel is hoping that the 8-thread i3-10100 will help out there, but I have a feeling that AMD might win that battle too. 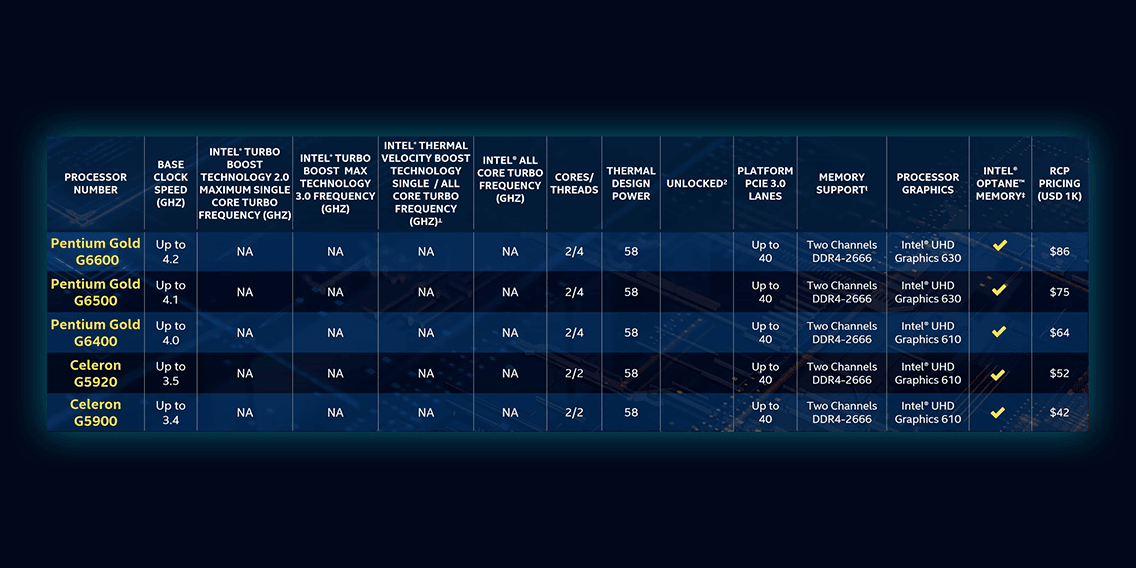 Below a $100, Intel has quite a few options as well, but those are all dual-core chips without even the most basic Turbo Boost features. They are really meant for budget systems and not much else. This also means that Intel will be leaving the $100 Ryzen 3 3100 all alone without any competition whatsoever.

And what about the motherboards? Well we have a pair of new platforms called Z490 and H470. But from a high-level view a lot of them are just refreshes of Z390 motherboards with expanded features. And just to be clear, Comet Lake CPUs don’t have support for PCIe Gen4. Let’s take a look at this ASRock Z490 Master, it has additional power inputs to handle the new power-hungry CPUs, more high bandwidth USB connectors than the Z390 generation and one other thing: Claimed support for PCIe4 Gen4. Let me explain what’s going on here. That is PCIe Gen4 hardware, but these new processors won’t have official support for PCIe Gen4 devices. Supposedly a lot of the motherboard manufacturers will start making this claim. So what’s really going on here? Well it could be shady marketing or it could be something else, it could be a mystery that none of us know. Gigabyte did mention that all their boards will have the necessary components and the PCB traces, so if Intel does decide to launch their next generation processors with PCIe Gen4 support is already built-in. That is a pretty big stretch in my opinion, since it assumes Intel will make upcoming architectures drop-in compatible for LGA1200 motherboards. 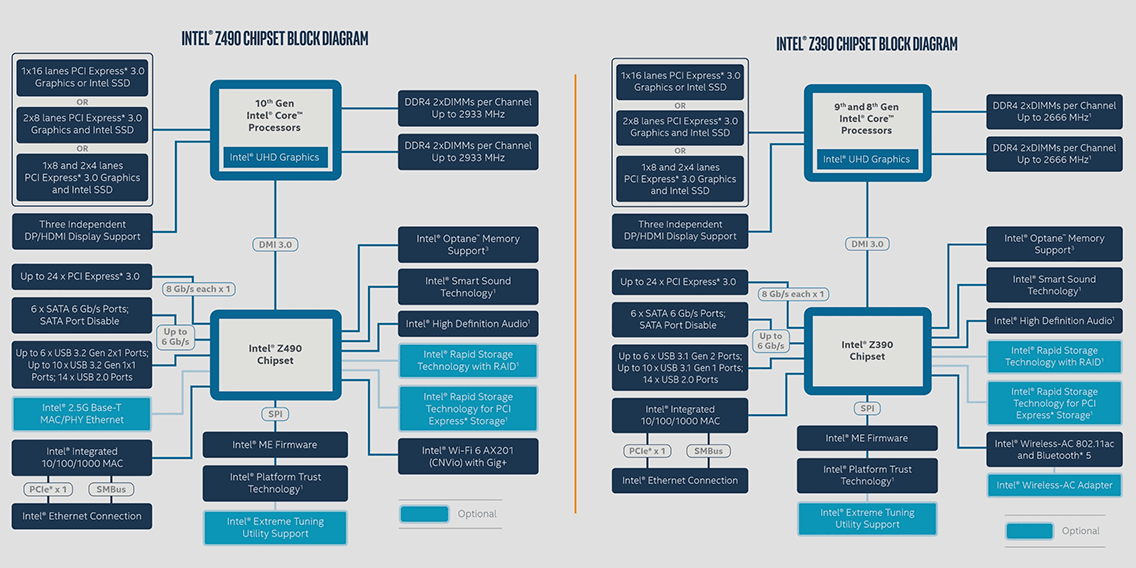 The other problem really has to do with the Z490 platform itself, but to understand that let’s take a look at what it’s all about. Right now both the Z490 and the CPU can only support PCIe Gen3 graphics. Not only that, but the DMI 3.0 interface between the chipset and the processor still uses the old 4 lane PCIe 3.0 link. That means it can transfer a maximum of 4GB/s of data, and that isn’t enough for PCIe Gen4 on top of all the other I/O. The only option is for the CPU to generate those PCIe Gen4 lanes and Comet Lake just can’t do that. That leads to the big question of what is actually new to Z490? Not that much, actually. There is now integrated Wi-Fi 6 support instead of 802.11ac, and the option for Intel’s 2.5G LAN interface. And that’s it, seriously Z490 is basically Z390 with support for Wi-Fi 6. Honestly, I really wish that Intel offered a little bit more on the platform front to compete with what AMD has, but sadly that’s not the case this time. 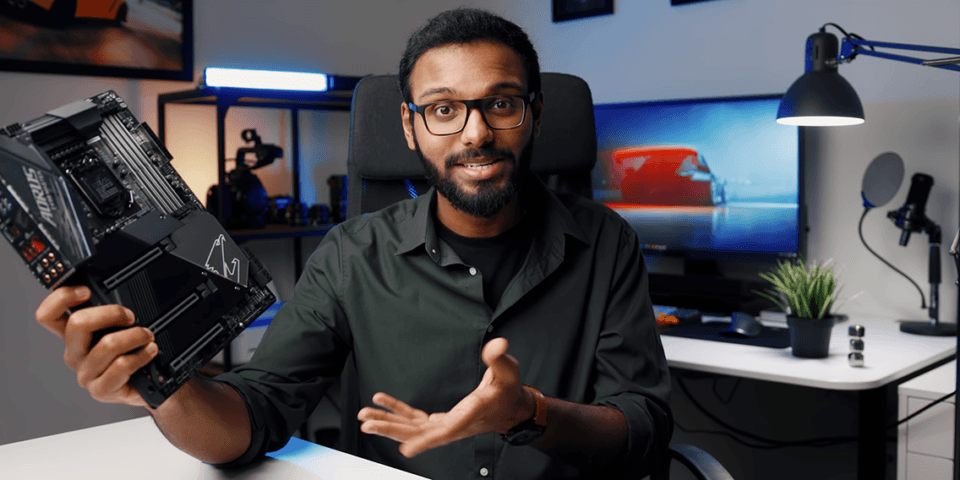 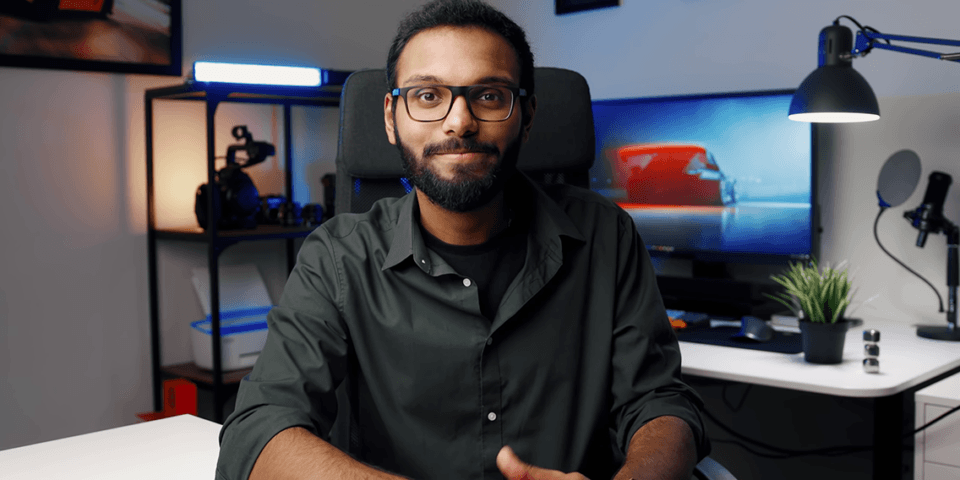 I think I’m going to wrap up this explain article now. You can expect to see our full review in the next few weeks, but from what I can see right now it looks like Intel might have something a bit more competitive, but will it be enough? I don’t really know, because more cores and higher frequencies isn’t really anything new, and there is a lack of new features on the chipset side. I don’t see anything extraordinary with this new platform and that to me is a bit concerning. But what do you all think?

Check out the Viewsonic XG series at the links below!