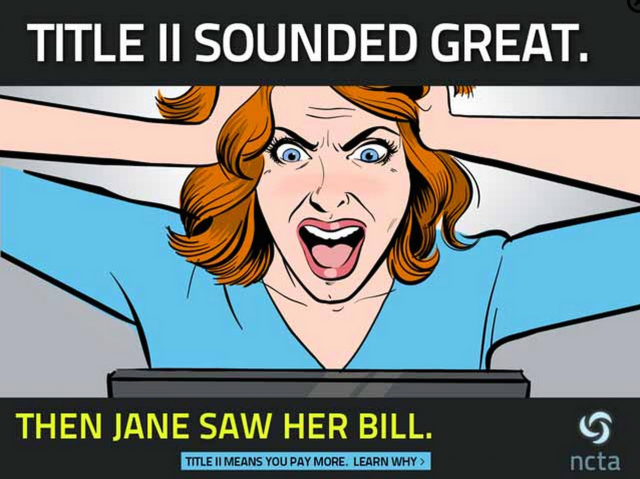 Making Internet service a utility—what’s the worst that could happen?

The cable industry takes a subtle approach to anti-Title II advertising.
National Cable & Telecommunications Association
Update: It’s 2020, and a coronavirus pandemic has underscored how crucial broadband service is to the lives of Americans for work, entertainment, and school. Internet service is a necessity, and yet it isn’t regulated as a utility the way services like water and electricity are. But back in 2014 (when this story was originally published) and 2015, there was a hot debate over whether the Federal Communications Commission should treat broadband service like a utility—or, more precisely, as a Title II common-carrier service—in order to impose net neutrality rules.

We’re resurfacing this article from December 2014, which examined the cable industry’s argument that utility-style regulation would hurt broadband users and broadband providers. Ultimately, the FCC did reclassify broadband to enforce net neutrality in 2015, but never imposed strict utility regulations like price caps or network unbundling. Broadband users enthusiastically supported the rules and ISPs admitted to investors later that the extra regulation didn’t harm their businesses. But FCC Chairman Ajit Pai deregulated the broadband industry anyway, eliminating net neutrality rules and other consumer protections such as a prohibition on hidden fees. Since Pai’s decision, the top ISPs have been decreasing network investment despite operating in the mostly regulation-free environment they sought, and the FCC has relied on ISPs’ voluntary promises instead of real rules to keep customers online during the pandemic.

There seems to be nothing the broadband industry fears more than Title II of the Communications Act.

Although Title II offers perks that help providers build out networks, ISPs and telecom industry groups have argued that Title II would bring a host of oppressive regulations that the FCC would have a hard time not imposing. They claim that Title II will impose so many extra costs that they’ll be forced to raise prices—though customers might point out that ISPs aren’t shy about raising prices to begin with.

So what, exactly, are ISPs afraid of? We wanted to find out what the worst-case scenario for broadband providers is. Hypothetically, assuming the FCC were to impose all possible Title II regulations (even though Obama specifically said he doesn’t want that to happen), what kinds of new regulations would ISPs have to follow and what new costs would they absorb? And would consumers pay the price in higher bills and worse service?

The cable industry has a lot to say on this subject

To get answers, we spoke with the biggest cable industry trade group, the National Cable & Telecommunications Association (NCTA). It represents cable providers such as Comcast, Time Warner Cable, Cox, Cablevision, and Charter.

One big requirement Title II could bring is regulation of rates charged by Internet providers, either imposing a uniform limit on what all providers can charge or forcing each one to get permission for price increases and justify them based upon the amount they invest in their networks.

Theoretically, the FCC could also enforce “local loop unbundling,” which would force network operators to lease access to last mile infrastructure. In turn, this could bring a new set of competitors who would resell Internet service over the incumbents’ networks without having to lay their own wires throughout each city and town, similar to how the DSL market operated before the FCC removed the unbundling requirement in 2005.

On the plus side for cable companies, the NCTA is confident the FCC won’t enforce local loop unbundling.

“The thing that worries people the most is probably rate regulation.”

“Unbundling in the [Communications] Act, is under Section 251C, which only applies to incumbent local exchange carriers,” Steve Morris, the NCTA’s associate general counsel, told Ars.

“Our preliminary view is that there’s no way you could find that an ISP is an incumbent local exchange carrier, so those provisions should not apply to ISPs,” Morris said. Landline phone companies that also offer Internet service, like AT&T and Verizon, are still ILECs and could theoretically be subject to unbundling. But this isn’t likely given that the FCC abandoned unbundling nearly a decade ago.

While other Title II regulations wouldn’t necessarily apply to Internet providers because of the FCC’s forbearance powers, industry groups argue that forbearance is a highly complicated process that will make it difficult for the FCC to avoid imposing common carrier rules that go far beyond net neutrality.

“I think the thing that worries people the most is probably rate regulation,” Morris said. 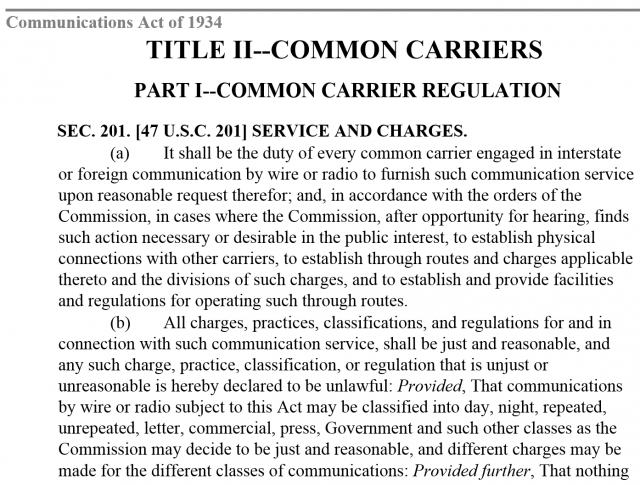 There are multiple markets in which the FCC could regulate the rates charged by Internet providers. The most obvious one is the prices charged to residential and business customers who subscribe to broadband. The NCTA doesn’t seem worried about that.

“Most people seem to say the commission could forbear from that,” Morris said. “The president seemed to say there was no need for that sort of regulation.”

More likely, though, is regulation of the interconnection deals Internet service providers strike with other large network operators such as Level 3 and Cogent and online content providers such as Netflix. Netflix and others have called upon the FCC to mandate “settlement-free peering,” interconnection deals that happen without payment. Traditionally, payment-free interconnection has only been available in cases where the ISP and the entity it connects to exchange a roughly equal amount of traffic. Netflix wants free network access regardless of whether the traffic is balanced, and the site could get its wish with Title II.

The primary goal of net neutrality advocates is to outlaw paid prioritization deals in which online content providers pay to have their traffic sped up over the so-called “last mile,” the path from the edge of an ISP’s network to a consumer’s home. (ISPs have not struck any such deals yet, but they could because the FCC’s prior net neutrality rules were overturned in a court order in January 2014.) Interconnection is different from paid prioritization; it occurs only at the edge of an ISP’s network where it connects to the rest of the Internet and would not be affected by most net neutrality proposals. 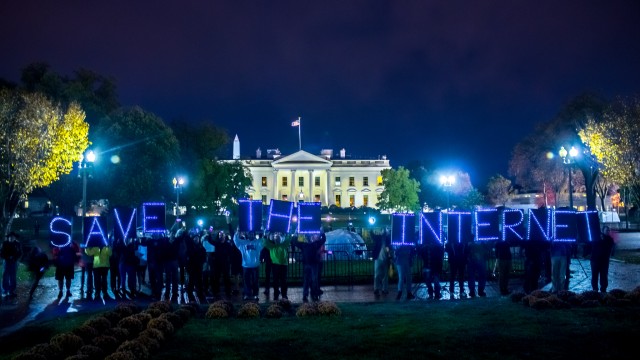 The FCC is reviewing interconnection deals but hasn’t said whether it plans to regulate interconnection rates. With Title II, it could insist on reasonable rates without necessarily requiring that interconnection be free. “Reasonable” would be left open to interpretation and decided on a case-by-case basis when there are complaints.

Harold Feld, an attorney and senior VP of the pro-Title II group Public Knowledge, pointed out that Section 251A of Title II requires telecommunications carriers to interconnect with other carriers. A requirement like this could have helped force Comcast’s hand when it was demanding payment from Cogent in exchange for upgrading links used to carry Netflix and other traffic. That dispute was settled indirectly when Netflix paid Comcast, but customers suffered from worse performance in the meantime.

Assuming Cogent was also considered a telecommunications provider, “the FCC could say, ‘look, you’re not allowed to sit there and do nothing when you’re faced with capacity constraints,'” Feld told Ars. “‘There has to be some way in which you upgrade to meet the capacity demand when it’s clear there is capacity demand.’ They could even say generally, ‘your pricing has to bear some relationship to cost.'”

Under Title II, Netflix could also complain to the FCC if it believed Comcast and other ISPs were charging unreasonable rates for interconnection, because Netflix would be a customer of a common carrier, Feld said.

But rate regulation isn’t something the FCC does lightly. The commission has spent years gathering pricing data on the special access market, in which businesses such as Sprint and T-Mobile buy bandwidth from the likes of AT&T, Verizon, and CenturyLink, without making any final decision.