Enlarge / Hattis Law isn’t pulling any punches in the allegations made in its class-action lawsuit, specifically calling WD out not only for using SMR technology in less-than-ideal devices, but flatly accusing them of outright deception in the process.
Hattis Law

All three of the surviving conventional hard drive vendors—Toshiba, Western Digital, and Seagate—have gotten caught sneaking disks featuring Shingled Magnetic Recording technology into unexpected places recently. But Western Digital has been the most brazen of the three, and it’s been singled out for a class action lawsuit in response.

Although all three major manufacturers quietly added SMR disks to their desktop hard drive line-up, Western Digital is the only one so far to slip them into its NAS (Network Attached Storage) stack. NAS drives are expected to perform well in RAID and other multiple disk arrays, whether ZFS pools or consumer devices like Synology or Netgear NAS appliances.

In sharp contrast to Western Digital’s position on SMR disks as NAS, Seagate executive Greg Belloni told us that there weren’t any SMR disks in the Ironwolf (competitor to Western Digital Red) line-up now and that the technology is not appropriate for that purpose.

“Seagate only produces NAS drives that are CMR,” Belloni says. “We do not have any SMR drives in our Ironwolf and Ironwolf Pro drives, which are NAS solutions […] we don’t recommend SMR for NAS.”

Hattis Law has initiated a class action lawsuit against Western Digital, accordingly. The lawsuit alleges both that the SMR technology in the newer Western Digital Red drives is inappropriate for the marketed purpose of the drives and that Western Digital deliberately “deceived and harm[ed] consumers” in the course of doing so. 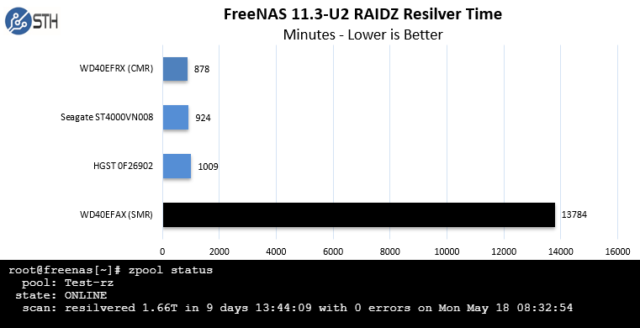 Hattis’ position is strengthened by a series of tests that website ServeTheHome released yesterday. The results demonstrate that although Western Digital’s new 4TB Red “NAS” disk performed adequately as a desktop drive, it was unfit for purpose in a ZFS storage array (zpool).

Although Western Digital does not, to the best of our knowledge, have an official policy regarding replacement of Red drives unknowingly purchased with SMR, several readers have shared their individual success stories of getting Western Digital’s customer care department to replace such disks with non-SMR disks free of charge.

Those interested in all the details may view the full text of Hattis Law’s class action lawsuit here.