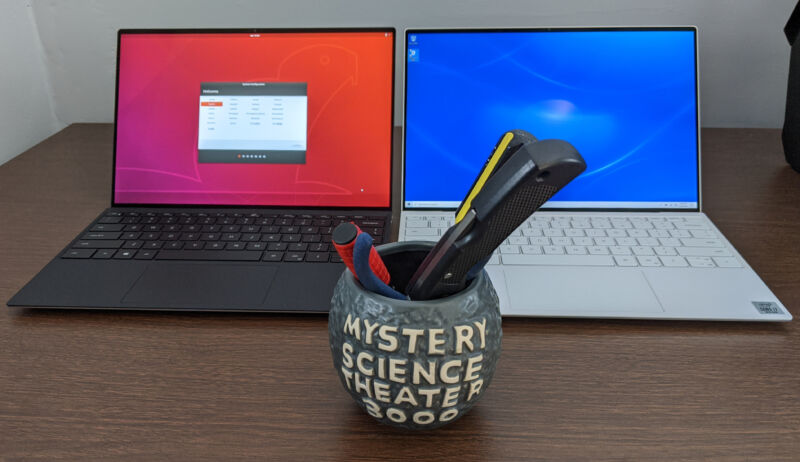 Enlarge / On the left, we have the XPS 13 Developer Edition running Ubuntu 18.04. On the right, a regular XPS 13 running Windows 10 Pro.
Jim Salter

We spent this weekend going hands-on with a pair of 2020 model Dell XPS 13 laptops—one standard edition running Windows 10 Pro, and one Developer Edition running Ubuntu 18.04 LTS. The XPS 13 is among Dell’s most popular models, and for good reason—it’s a sleek, solid-feeling laptop that usually has top-of-the-line hardware and good battery life.

Unfortunately, both of the XPS 13 models we tested had driver issues—particularly the Windows laptop, which has a Killer AX1650 Wi-Fi card.

The XPS 13 is a small, sleek, very solid-feeling laptop with a bright screen and very narrow bezels. It doesn’t offer much in the way of connectivity—there’s no Ethernet jack, no HDMI port, and no USB-A port either.

The laptop does offer one Thunderbolt port on either side, so you can get just about anything connected with the appropriate dongle—but unless you buy a Thunderbolt or USB-C dock, you’ll only be able to connect one of whatever it is, since the other Thunderbolt port will be occupied by the charger.

There is a separate 3.5mm audio jack, so XPS 13 users will be able to connect a set of old-school wired headphones without eating up a Thunderbolt port in the process.

Both models we tested came with touchscreens, and they seem adequate—though we did not test with a stylus, since neither laptop came with one. 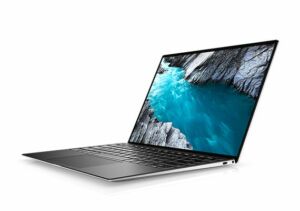 This year’s XPS 13 is the first Ice Lake laptop we’ve had the chance to go hands-on with. We started by testing the standard XPS 13 with Windows Home on it—and at first, the device seemed more like it was powered by an 8-year-old Celeron than a brand-new 10th generation Core i7.

Everything about operating the XPS 13 was sluggish—windows were reluctant to open, applications were glacially slow, and the fans went all the way up to 11, complete with a nasty metallic whine. Tracking down the problem drove us berserk—while Resource Monitor showed lots of CPU and disk activity, it didn’t attribute the CPU activity to any process or service.

MS Office Click-to-Run went through a relatively brief spike of 1GiB/sec disk activity, which certainly didn’t help—but after the Click-to-Run process had done its thing and settled down again, the CPU was still thrashing to 100 percent usage on all eight available threads of the Ice Lake CPU. It turns out that the problem was the “Killer Control Center”—a software application associated with the Killer AX1650 Wi-Fi card.

Killing the Killer Center took CPU usage down from 100 percent on all eight threads to about 30 percent total, spread across the four physical cores. This was enough for the fans to spin down considerably and make the laptop usable—but there was still more room for improvement.

Luckily, we already knew that the Killer AX1650 shares the same physical hardware with a simple Intel AX200. So after downloading the vanilla AX200 drivers from Intel’s site and running the installer, we were able to forcibly replace the Killer driver with the Intel driver—which brought CPU usage the rest of the way down to what it should be, well under 10 percent.

With the Killer killed, the XPS 13 is a laptop transformed. The Ice Lake i7-1065G7 is a high-end CPU, and it feels that way—we think most people shopping Intel laptops should be looking for Ice Lake CPUs like the 1065G7 rather than their Comet Lake equivalents, which are hotter, consume more power, and have inferior graphics.

If your only experience with a new laptop this year is an Ice Lake laptop, you’ll probably be impressed. But this wasn’t our first 2020 laptop experience—and the i7-1065G7 is a far cry from the Ryzen 9 4800HS we tested last month in the ASUS Zephyrus G14.

The XPS 13 did score far better for battery life than the Zephyrus G14 did, though. It got a PCMark 10 Modern Office battery life score of 14 hours 11 minutes, comparing to the G14’s 9 hours 35 minutes. This likely has a lot to do with this review unit’s FHD+ display rather than 4K UHD+; with the 4K UHD+, we’d expect the Modern Office score to drop significantly.

Physically, the only difference between the XPS 13 Developer Edition and the plain-vanilla XPS 13 we had already tested is the color—where the Windows system had the optional, $50 more expensive “Alpine White” interior, the Developer Edition system used the standard “Black.”

In theory, the outsides are different, too—the Windows machine’s exterior was “Frost White” and the Linux machine’s is “Platinum Silver.” But in most lighting, you’d be hard pressed to tell the two apart without opening them up.

There were some significant hardware differences, as well—you can’t buy the regular XPS 13 with more than 16GiB RAM in it, while the XPS 13 Developer Edition can be spec’d up to 32GiB. Our particular XPS 13 DE also had a 4K UHD+ touchscreen, instead of the 1920×1200 FHD+ touchscreen on our Windows system—but that, like the color, can be configured the same on either version.

The XPS 13 Developer Edition came pre-loaded with Ubuntu 18.04 LTS, and for the most part, it’s pretty standard and won’t offer experienced Ubuntu users any surprises. It still feels strange to click through acceptance of Dell’s corporate Terms of Service on first run—and seeing a 6GiB FAT32 recovery partition is a little odd, too.

Most users will likely never see the two Dell applications bundled with the XPS 13 DE—the “Dell Linux Assistant” and Dell Recovery. Dell Recovery allows the user to either roll the system back to a factory-fresh state using the 6GiB FAT32 partition at the top of the SSD, or it allows users to create a full set of OS installation media onto either USB disk or DVD.

The Dell Linux Assistant isn’t particularly helpful, and why it was included is a bit of a mystery. It offers two options—System Information and User Registration—and clicking either option resulted in a 17-second wait (yes, we counted) during which nothing whatsoever happens. That gives you the opportunity to wonder if you mis-clicked or the app locked up. But no—it’s just that slow.

After 17 Mississippis, you get either a terse set of hardware information—roughly equivalent to Ubuntu 18.04’s About screen and inferior to 20.04’s—or you get a simple form to fill in your information. We’re not sure why this app is so sluggish, why it’s limited to such a tiny amount of screen real estate, or why the User Registration wasn’t just a shortcut to a website.

Dell’s OEM Ubuntu 18.04 loadout is a little different from the standard ubuntu-desktop metapackage—it strips out Firefox entirely and replaces it with both Chromium and the full proprietary Google Chrome browsers, both of which are pinned to the launcher.

We quickly discovered, unfortunately, that Google Chrome wasn’t properly installed—a simple apt update in the Terminal threw GPG errors, because the key for the repository hadn’t been imported. This is most easily fixed simply by browsing to the standard Chrome download page and installing it again from there—the user gets the newest version, and the GPG key is properly imported, with no more errors during updates.

Although our Developer Edition laptop was thankfully free of the Killer Control Center and its associated extreme CPU thrashing, it wasn’t without driver issues of its own. Our XPS 13 Developer Edition locked up the desktop environment hard once while we were testing it; when locked up, the system appeared completely unresponsive, but pulling a plain-text TTY using Ctrl-Alt-Fn-F3 worked, and the desktop environment could be killed off from there without rebooting the OS itself.

We reached out to a colleague who owns a 2020 model XPS 13 Developer Edition, and he reported having the exact same thing happen “a few times” since he’s owned it. We suspect the issue lies with some out-of-tree drivers Dell has installed—the Additional Drivers icon is removed from the Launcher entirely, but it can still be reached “through the back door” by opening Software & Updates instead, and clicking its Settings button.

Once we get to Additional Drivers, we can see that Gnome thinks that both the Wi-Fi card and the sound driver are broken—and that there’s a “daily” driver installed for the audio. Gnome isn’t entirely right about this; both sound and Wi-Fi were working fine on the XPS 13—but we suspect that a non-standard driver is what’s occasionally locking the desktop up.

If we owned this laptop, our next step would probably be to wipe the whole thing and do a fresh install of vanilla Ubuntu 20.04, which should offer native support for all the laptop’s hardware already.

The last thing we want to cover on the XPS 13 Developer Edition is battery life. We don’t have a snazzy Modern Office Applications benchmark suite to run in Linux like we did in Windows—so instead, we did our usual fallback method, which is to watch the BBC’s Ten Hours of Relaxing Oceanscapes in fullscreen mode at 1080p for an hour.

This is a worse result than we’re accustomed to from top-of-the line laptops in this class. HP’s Dragonfly Elite G1 lost only 16-percent battery life in the same test, and its screen was at full brightness while the XPS 13’s was at 30 percent. To be fair, the XPS 13’s screen is a bit brighter than the Dragonfly Elite’s—500 nits to 400—and it looked great in my office at that setting.

We suspect that the majority of the difference is due to the XPS 13 Developer Editions’ 4K screen. If you don’t need 4K in a laptop—especially one as small as this—you’re likely better off without it. The 4K display adds a whopping $300 to the purchase price point, as well as putting a significant additional drain on the battery. You can save another $100 on top of that if you go for the non-touchscreen version of the FHD+ display.

We really wanted to love the XPS 13, but with driver-related screwiness on both Ubuntu and Windows, it was a difficult device to love. The choice of the Killer AX1650 Wi-Fi card over the plain-vanilla Intel AX200 was a poor one for the market. With integrated graphics only, we don’t see the XPS 13 as being anybody’s first choice of “gamer elite” laptop, and the more complex Killer driver and software stack is of dubious value, even when it does work right.

The laptop itself physically looks and feels great. The hinges are just the right stiffness, the screen is bright and clear, the keyboard feels very good for such a small, thin laptop, and its white backlighting looks good in the dark. The Ice Lake i7-1065G7 is a capable CPU, and the Iris+ integrated graphics are a big step up from older models’ UHD graphics. The audio quality is best described as “perfectly cromulent”—it’s unlikely to impress anyone, but it’s plenty loud and reasonably listenable when playing music on YouTube.

The closest competitor to the XPS 13 that we’ve reviewed is HP’s Dragonfly Elite. Overall, we’d give the nod to the Dragonfly Elite for quality—it’s marginally smaller, has better battery life, and the 2019 model wasn’t plagued with driver weirdness. But it’s also significantly more expensive—at HP’s store, a Dragonfly Elite with an eighth-generation i5 and 256GB SSD costs about $250 more than an XPS 13 with a 10th-gen i7 and a 512GB SSD.