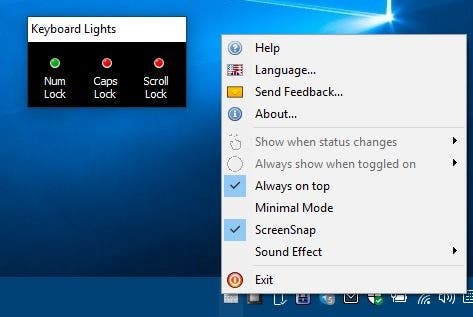 If your keyboard doesn’t have an LED indicator for Caps Lock, Scroll Lock or Num Lock, you can use applications like AddLEDs or 7Caps to get an on-screen indicator. These programs may also be useful if the keyboard is not in reach, or if the keys are no longer functioning.

Keyboard Lights is a similar freeware program, that offers a more minimal approach.

During the installation, you can set Keyboard Lights to automatically start with Windows. Oddly, this option cannot be toggled anywhere from the program’s settings. Unlike the other programs which we have used, the interface of Keyboard Lights does not stay on top of the screen constantly (by default) or places multiple icons in the system tray. Instead it displays an OSD (on-screen display) notification to indicate the change (when one of the Lock keys is pressed). 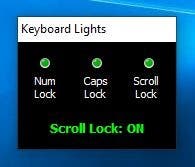 The pop-up interface of Keyboard Lights displays three virtual LEDs which are labeled Num Lock, Caps Lock and Scroll Lock. Let’s say, you hit one of the keys, the program does four things to indicate a change in the status.

First the pop-up window appears, the on-screen LED for the corresponding key turns green (if ON, red if OFF), a text banner appears in the window to display the status change (for e.g. Caps Lock: ON, or Num Lock: OFF), and a sound effect is played to indicate the change. All these happen simultaneously, so you’re very likely to notice at least one or all of the indicators.

The notification window fades away after a couple of seconds. This is a really cool way to indicate the status of the three Lock options. You can drag the interface and place it anywhere on the screen.

Want an even simpler design? Right-click on the tray icon and select “Minimal Mode”.

When this option is turned on, the pop-up window of Keyboard Lights will only display the three lights and their labels, i.e. it discards the window’s title and the text banner.

If you’d rather want the program’s interface to stay on top without fading away, right-click on the tray icon and enable the “Stay on top” option. You can use it in minimal mode or the normal one.

Alternatively, if you only want Keyboard Lights to stay on top when one of the locks are on, use the “Always show when toggled on” menu. You can select one or all three lock options for this mode. When the lock has been disabled, the interface will fade away.

Use the “Show when status changes” menu and select the lock options that will trigger the pop-up window to appear. If you don’t want it to appear for one of the locks, you may disable it from this menu.

The sound that’s played to indicate a status change is very feeble, so you may want to head to the “Keyboard Lights context menu > Sound Effects > Browse” option to select a different audio file that is in the WAV format. Not a fan of the audio notifications? You can disable the sound effect from the same menu.

Screen Snap is an odd feature. Let’s say you want to move the program’s interface to the top of the screen, and then drag it horizontally across, Screen Snap makes it stick to the edge in a straight line.

The program isn’t available in a portable version.

I like the fact that Keyboard Lights provides a non-intrusive way to indicate whether Caps Lock, Num Lock and Scroll Lock are on.