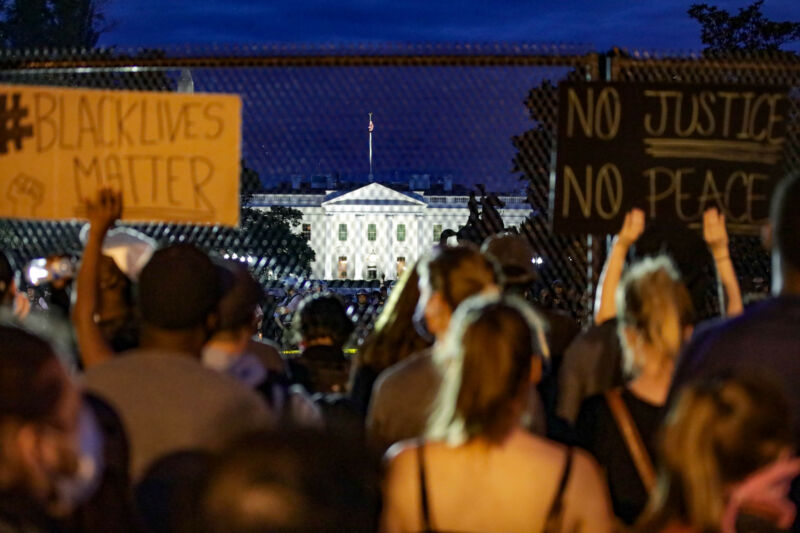 Enlarge / Thousands of peaceful demonstrators holding banners gather in front of the White House for the fifth consecutive day to protest the death of George Floyd, an unarmed black man who died after being pinned down by a white police officer in Minneapolis, on June 2, 2020 in Washington, DC, United States.
Yasin Ozturk | Anadolu Agency | Getty Images

As enormous protests in support of black communities and against police brutality continue to sweep across the United States, Facebook is facing a protest of its own. The company and its CEO, Mark Zuckerberg, are facing criticism from users, competitors, civil rights organizations, and even employees for allowing racist content and hate speech to proliferate on the platform, amplified by President Donald Trump.

Facebook on Tuesday removed some accounts affiliated with white supremacist groups after some members advocated bringing weapons to current protests, Reuters reports. It also removed accounts falsely claiming to be affiliated with antifascist groups that advocated stirring up trouble. Twitter similarly removed accounts over the weekend that were purporting to represent antifascist organizations, but were in fact linked to a white nationalist group.

What Facebook has not taken action against, however, are statements by Trump or other public officials that also call for violence or stoke racism. Specifically, Facebook has declined to act against a post from May 29 in which Trump called protesters demonstrating following Minneapolis’s police killing resident George Floyd “thugs.” In the same post, the president added, “Any difficulty and we will assume control, but when the looting starts, the shooting starts.”

Even Snapchat has now taken action against Trump’s account based on the content he posted to Facebook and Twitter. CEO Evan Spiegel sent a memo to all employees on May 31 explaining that the platform will no longer be promoting the president’s content in its Discover platform, writing, “we simply cannot promote accounts in America that are linked to people who incite racial violence, whether they do so on or off our platform.”

Facebook employees promptly challenged Zuckerberg to do something. “Mark is wrong, and I will endeavor in the loudest possible way to change his mind,” the leader of Facebook’s News Feed design team said.

“I work at Facebook and I am not proud of how we’re showing up,” another Facebook employee said on Twitter. “The majority of co-workers I’ve spoken to feel the same way. We are making our voice heard.”

One engineer publicly resigned from the company in protest. About three dozen of the company’s earliest employees today signed on to a letter to Zuckerberg calling his choice a “betrayal” of the site’s early ideals. “The company we joined valued giving individuals a voice as loud as their government’s—protecting the powerless rather than the powerful,” the former employees wrote. “Facebook isn’t neutral, and it never has been. Making the world more open and connected, strengthening communities, giving everyone a voice—these are not neutral ideas. Fact-checking is not censorship. Labeling a call to violence is not authoritarianism. Please reconsider your position.”

Facebook, like most other “knowledge sector” companies, currently has a majority of its employees working remotely due to the novel coronavirus crisis, and it plans to expand remote work going forward. Nonetheless, about 400 employees participated in a virtual walkout on Monday in protest of Facebook’s inaction.

Zuckerberg defended his choices in an internal call with employees the next day. According to leaked audio of the call Recode obtained (transcript), Zuckerberg said he researched the statement and found it “troubling,” but he didn’t see it violating the site’s policies. “The reference is clearly to aggressive policing—maybe excessive policing—but it has no history of being read as a dog whistle for vigilante supporters to take justice into their own hands,” Zuckerberg told said on the call.

During the call, Zuckerberg also admitted in response to employee questions that exactly one Black Facebook employee had been involved in the company’s decision. (Less than 4 percent of Facebook’s US workforce are black.)

Civil rights, then and now

It is true that the phrase is not a dog whistle, which is something meant to sound innocuous to those who are not members of the target in-group. It is instead more of a megaphone, meant to be heard and amplified to everyone in range. It also does not instruct independent vigilantes to take action, but rather it encourages state and federal actors to do so.

The phrase originated with Miami Chief of Police Walter Headley in 1967. Headley, speaking about local unrest related to the civil rights movement, specifically said, “We don’t mind being accused of police brutality… There is only one way to handle looters and arsonists during a riot and that is to shoot them on sight. I’ve let the word filter down: When the looting starts the shooting starts.” Ardent segregationist George Wallace echoed the phrase during his failed 1968 presidential campaign.

Leaders of three civil rights groups—Color of Change, The Leadership Conference on Civil and Human Rights, and the NAACP Legal Defense and Educational Fund—also spoke with Zuckerberg and Facebook COO Sheryl Sandberg about the company’s choice not to act. The conversation did not go well. In a statement after the call, the directors of all three groups said they were “disappointed and stunned by Mark’s incomprehensible explanations for allowing the Trump posts to remain up.

“He did not demonstrate understanding of historic or modern-day voter suppression and he refuses to acknowledge how Facebook is facilitating Trump’s call for violence against protesters,” they added. “Mark is setting a very dangerous precedent for other voices who would say similar harmful things on Facebook.”

Rashad Robinson, president of Color of Change, also spoke with Bloomberg News about the call. “I feel like I spent a lot of time, and my colleagues spent a lot of time, explaining to him why these things are a problem, and I think he just very much lacks the ability to understand it,” Robinson told Bloomberg.

Facebook’s executive staff has been fully aware for years that the way its site operates stokes divisiveness and drives extremism, The Wall Street Journal recently reported.

As far back as 2016, Facebook’s own internal research found that extremist content proliferated on the site, the WSJ found. A presentation delivered internally at the time found that “64% of all extremist group joins are due to our recommendation tools.”

Rampant hate speech continues to proliferate all over Facebook, even as the company tries to increase its capacity to moderate content. So, too, does misinformation. Although Zuckerberg recently touted Facebook’s ability to use fact-checking labels on false or misleading content related to COVID-19, he also refused to apply fact-checking to content posted by politicians.

Facebook and Zuckerberg have, in fact, explicitly said many times over that political figures—especially, but not exclusively, the current US president—can break Facebook rules prohibiting hate speech and glorification of violence as much as they want, and the company won’t do a thing about it.

The company certainly appears to be standing by that position. And changing that, it seems, may be as much of an uphill battle as everything else.