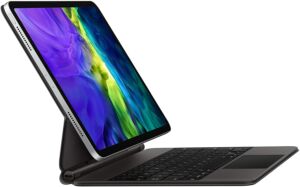 The past year has brought big changes to the iPad. First, the branch from iOS to iPadOS—and some accompanying changes to the software—signaled an effort by Apple to make real productivity possible on the platform. Second, Apple introduced trackpad support, bringing a whole new user interface paradigm to the iPad.

The latest product of that particular effort is the introduction of the Magic Keyboard peripheral from the 11-inch and 12.9-inch iPad Pro models. It combines a keyboard modeled after the keyboard peripheral of the same name for Macs—a generally beloved design—with the first trackpad made by Apple specifically for the iPad.

After spending some time with the Magic Keyboard, we’re ready to share our impressions. It’s just a peripheral, though, so this is going to be a very short review. We’re not going to get too much into the software side of things, as we’ve done that in our previous coverage of iPadOS as well as our most recent iPad Pro review. And we’re going to go into even more detail in an upcoming article entirely about working with trackpads and keyboards on the iPad.

In other words, these are some personal impressions after working with the keyboard for a bit—not your normal testing-driven, heavy duty Ars Technica review.

Almost everything about the keyboard is recognizable from another Apple product. The cover itself is made of similar materials to other Apple-made cases and covers for mobile devices. When it’s closed, a casual viewer might not notice that it’s different from Apple’s previous Smart Keyboard attachment. The keyboard itself, Apple says, is copied from its non-butterfly Mac keyboards.

The first thing you’ll notice about this peripheral is that the iPad ends up suspended in air just a bit above the keyboard—a sort of hover effect. (It’s hard to describe, but you can see it in the photos.)

This hover effect is certainly eye-catching, and it allows for some very fine adjustments to the iPad’s angle—though I do wish there was a wider range of angles to adjust it to. Generally, I file this aspect of the design under just “neat” but it doesn’t fundamentally make this a better keyboard case than any that takes a different approach.

There is one big downside to this approach, though. A significant portion of the bottom-half of the cover is just blank space obscured by the iPad hovering above it. That’s space that can’t be used to, say, make the trackpad taller, which is something I’d have preferred.

I also feel that this approach makes the iPad a bit too tall in some situations—for example, it could make it even harder to fit an already large 12.9-inch iPad Pro on a cramped airplane tray in coach (during the times when we can all again travel safely).

All in all, I think the design is eye-catching but otherwise unremarkable. It’s the actual typing experience that is the real strength of this tool.

As noted, Apple says this keyboard is modeled after the Magic Keyboard for the Mac, and it’s meant to be similar to those found in recent, post-butterfly MacBooks. You can tell. It does feel similar to those keyboards. And the layout is almost identical, right down to the inverted T arrow keys that Apple recently switched to from the less-popular butterfly keyboards’ layout.

If you’ve used one of those Mac keyboards, you’ve pretty much used this one, so there’s not more to say about it. The keys are responsive and bouncy, and my fingers travel well across them. They give good feedback, though they feel just a little bit soft.

To say that it’s better than the Smart Keyboard cover, Apple’s previous keyboard attachment for the iPad Pro, is a tremendous understatement. As I wrote in a couple of my recent iPad reviews, that keyboard peripheral was fine. It was usable. But it never felt nice to use, and no one would ever prefer it to just about any laptop keyboard.

For the most part, the Magic Keyboard feels just like a laptop keyboard. I have only two complaints about the typing experience itself. First, depending on how you orient the iPad over the keyboard, and depending on how big your fingers are, you can actually just barely, partly block access to the number keys on the top row. This is only an issue if the iPad is oriented to face as far up (as opposed to just forward) as possible.

Second, the base that houses the trackpad and the keys is a bit too shallow to comfortably use on your lap. The iPad Pro feels lopsided and unstable when I try this.

Some reviewers have already complained about the lack of function keys, but I don’t really see those doing anything in iPadOS other than acting as media and brightness controls. Yeah, it’s a little bit of a bummer to have to pull down the control center to change those things, but that gesture is easy enough. I didn’t find myself missing it, with only one exception. Your mileage may vary.

As for that exception: this keyboard is backlit like the MacBook keyboards, which is really nice to see. However, the only way to adjust the keyboard backlight level is to go deep into the Settings app on the iPad. There’s not even an option to add this to Control Center, which seems like an oversight. If it was in Control Center, I wouldn’t mind the lack of physical keys for it.