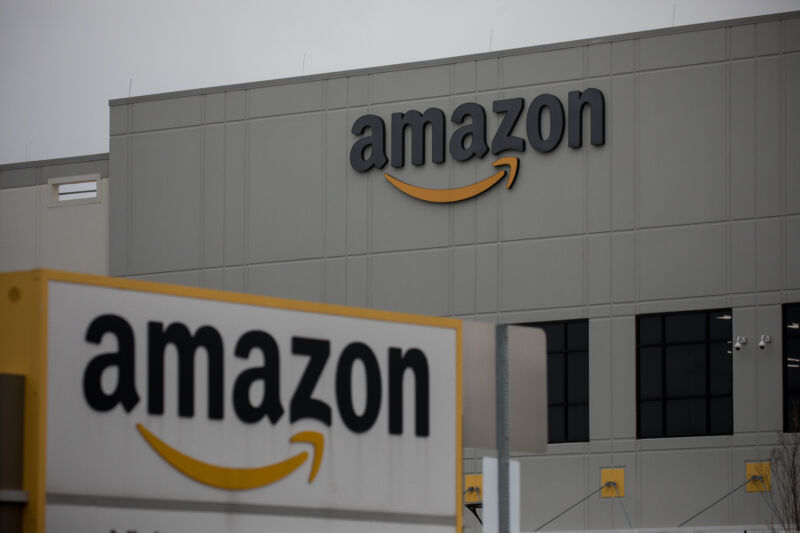 Enlarge / Amazon.com Inc. signage is displayed in front of a warehouse in the Staten Island borough of New York, US, on Tuesday, March 31, 2020.
Michael Nagle | Bloomberg | Getty Images

A group of Amazon employees are suing the company, alleging it mandated unsafe working conditions in one of its fulfillment centers that led to the spread of COVID-19 and deaths resulting from the disease.

“This case is about Amazon’s failures to comply with New York law and state and federal public health guidance during the COVID-19 pandemic at the JFK8 facility,” the complaint (PDF) reads, alleging, “the company has relied on purposeful miscommunication with workers, sloppy contact tracing, and the culture of workplace fear it has instilled at JFK to ensure it can maintain productivity while reducing costs, even if that means workers come to work sick and cannot engage in proper hygiene, sanitizing, or social distancing while at work in order to stay healthy.”

At least one worker at the JFK8 warehouse in Staten Island has died of COVID-19 so far, and several others have fallen ill. As recently as this past weekend, employees at the facility were receiving additional newly confirmed cases at the facility. One of the plaintiffs in the suit alleges that after she contracted the novel coronavirus at work in the warehouse, “she awoke to find her cousin with whom she lived dead in their bathroom” after he developed COVID-19 symptoms. She requested paid quarantine leave from the company under the terms of New York law, the suit says, but Amazon failed to pay her.

Aside from that back pay, however, the plaintiffs do not seek any financial damages for past harm, according to the complaint. “All they seek is an order requiring Amazon to comply with public health guidance to prevent more harm in the future.”

A former Amazon employee, Christian Smalls, spoke out about the unsafe conditions at JFK8 back in March and organized an employee walkout in protest. Amazon promptly fired him. A few days later, reporters at Vice Motherboard obtained an internal memo about Smalls’ firing, in which Amazon senior leadership determined to make Smalls the face of the entire organization movement and disparage him while doing so.

“If possible, make him the face of the entire union/organizing movement,” the company’s general counsel, David Zapolsky, wrote in the memo. “He’s not smart, or articulate, and to the extent the press wants to focus on us versus him, we will be in a much stronger PR position than simply explaining for the umpteenth time how we’re trying to protect workers.”

Amazon also fired several other employees who spoke out about working conditions in the company’s warehouses amid the COVID-19 crisis.

The Office of New York State Attorney General Letitia James in late April began an investigation into the health and safety practices at Amazon’s New York warehouses. “The information so far available to us raises concerns that Amazon’s health and safety measures taken in response to the COVID-19 pandemic are so inadequate that they may violate several provisions of the Occupational Safety and Health Act,” James’ staff wrote in an April 22 letter.

“Many workers are fearful about speaking out about their concerns following the termination of Mr. Smalls’ employment,” the letter added. “This is a particularly dangerous message to send during a pandemic, when chilling worker speech about health and safety practices could literally be a matter of life and death.”

We have asked Amazon for comment and will update this story if we hear back.