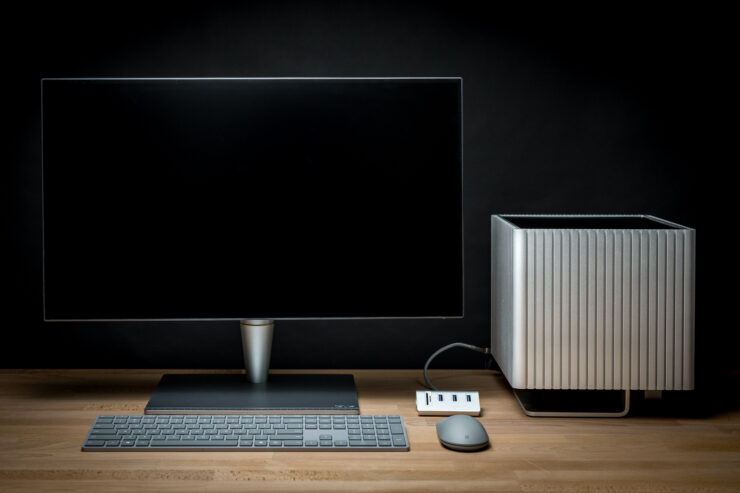 There’s a small selection of passively cooled cases out there but when done right, they look quite incredible. A user on Reddit (u/dllfphoto) has submitted his amazing build which he assembled in Streamcom’s DB4 passive chassis, utilizing an AMD Ryzen CPU and an NVIDIA GeForce GTX GPU.

The user who is a content creator and a professional photographer has built this PC for his wife and looks absolutely stunning. What’s even better is that all of it is featured inside the passively cooled Streamcom DB4 chassis which makes use of fanless design and has an internal volume of 18.25 liters. The chassis is also very compact and ideal for small form factor PC builders, measuring at just 260 x 260 x 270mm (W x D x H). 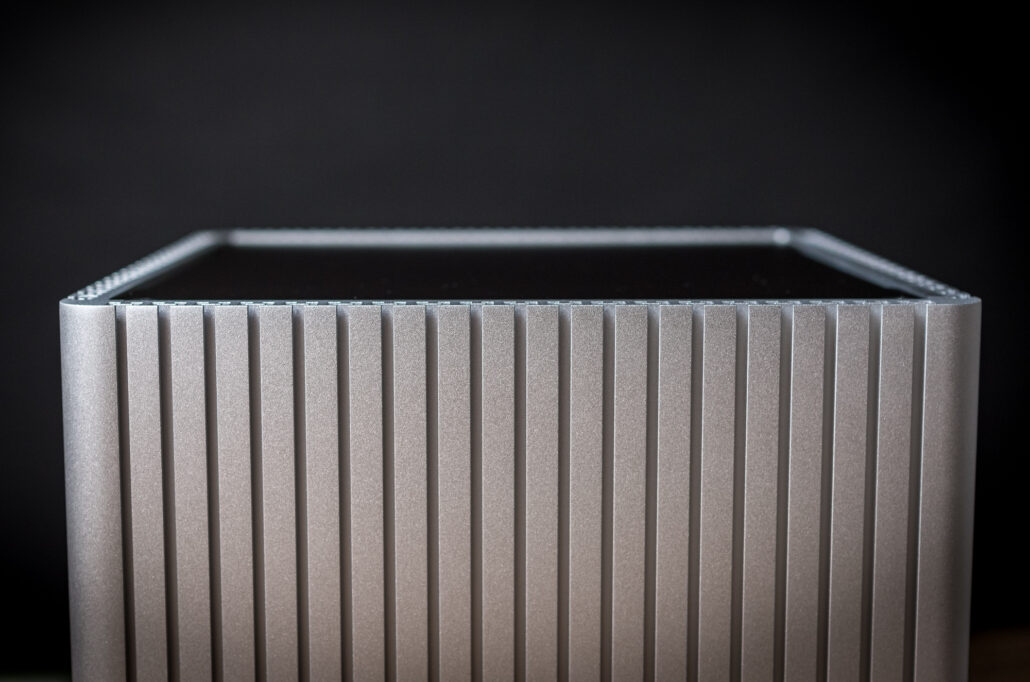 Streamcom’s DB4 comes with all the necessary cooling equipment in the form of four 6mm heat pipes with a cooling capacity of 65W that is expandable up to 110W. The case panels themselves are also made out of all-aluminum metal that uses a sandblasted finish with 4mm thick extruded panels that the heat pipes are attached to so they can dissipate the heat outwards. The chassis weighs in at 7.5 kg with the metal design making up for most of the weight.

The hardware used featured the AMD Ryzen 7 3700X which is a 65W chip on an ASUS ROG STRIX B450-I Gaming motherboard. The PC was coupled with 32 GB of G.Skill Trident Z Neo DDR4 ram clocking in at 3600 MHz, 2 TB of Sabrent Rocket PCIe NVMe SSD and a Gigabyte GeForce GTX 1650 SUPER OC 4 GB graphics card. The DB4 features slightly longer feet with rubber pads for extra support but also due to the fact that the I/O goes at the bottom of this case. In addition to the I/O from the motherboard itself, the DB4 features 2 USB 3.0 ports at the bottom. The GPU which sits at the bottom makes use of Streamcom’s GPU cooling kit by attaching the heatsink to a single side panel.

Display outputs and the power connector have to be right-angled to avoid bending of the cables when running them through the bottom side of the chassis. Additional cooling is provided through Streamcom’s LH6 CPU cooling kit which offers two-way heat dissipation for the CPU by attaching to the sides of the chassis. The PSU is an HDPlex 400W AC-DC design and is stated to be enough for the whole setup. Following is what the assembled PC looks like (via Imgur):

A Noctua NF-A9x14 fan was thrown in temporarily to keep the PSU in check since it was starting to get a bit hot but it uses a low-noise adapter which should retain the noise-free passive design of the build. The case is also designed specifically for graphics cards with no external power plugs but since the GTX 1650 makes use of a 6-pin connector, it was really hard for the user to squeeze one into power the graphics card.

And since the USB ports aren’t at the most convenient of places, the users got his hands on the CATEK USB 3.0 hub which features triple USB 3.0 ports and an SD card reader in an all-aluminum design which looks great and solves the problem of the bottom-placed USB 3.0 ports. The whole system, when put together, runs great with Thermal Grizzly’s Kryonaut paste which offers higher heat conductivity of 12.5W/mk. The paste was used on all components which had to be passively cooled by the heatsinks within the chassis. Overall, the following were the final temperatures for the whole system when booted up (via FanlessTech):

The user reports that the room was air-conditioned and the temps were tested under full load while the average use case of this PC led to much lower temperatures with the CPU hitting an average of 60C and the GPU hitting around 45C on average. The CPU and GPU had been slightly undervolted but that’s no problem for Ryzen 7 3700X as it enhances its efficiency even further with a slight undervolted while delivering the same amount of performance. 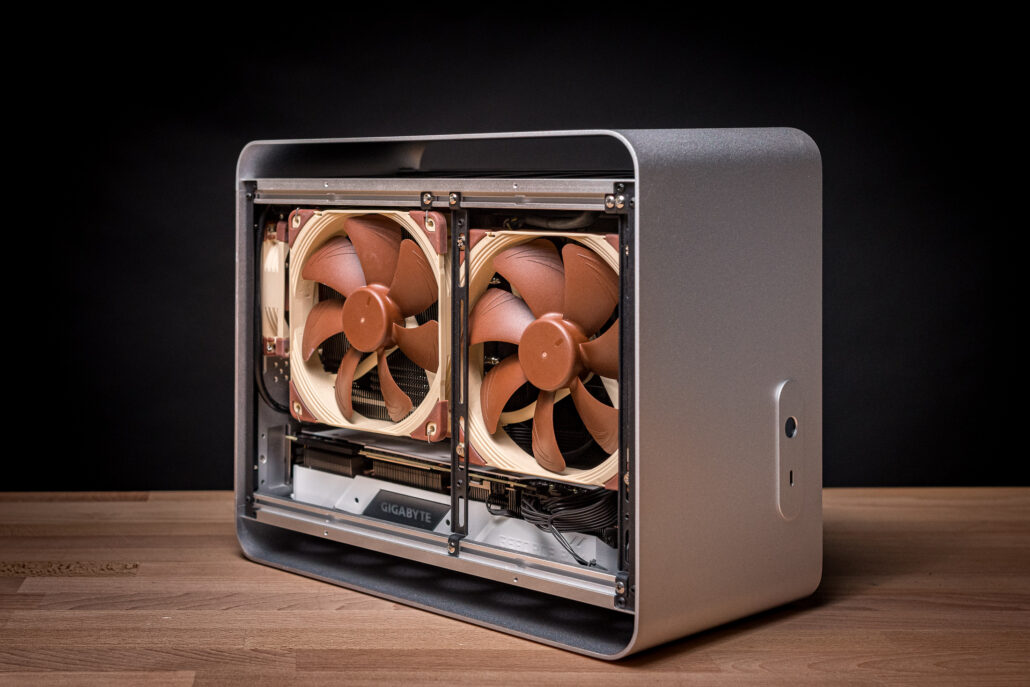 In addition to the Streamcom DB4 build for his wife, the user himself is also running an SFF PC inside the Streamcom DA2 chassis. This chassis which is about the same size as an external GPU enclosure features a nice aluminum finish and the user has some pretty high-end specs within it. We are looking at the AMD Ryzen 9 3900X configured on ASUS’s ROG STRIX X570-I motherboard with 32 GB of G.Skill Trident Z NEO DDR4-3600 (CL16) memory, Sabrent Rocket 2TB NVMe PCI-E SSD, a Noctua NH-C14S CPU cooler, a Corsair SF600 Gold PSU and finally, the Gigabyte GeForce RTX 2070 SUPER Gaming OC triple-fan graphics card.

Since this isn’t a passively cooled design, the user has gone with two Noctua NF-A14 fans and a rear Noctua NF-A9 fan as an exhaust to keep the thermals in check. Both setups look brilliantly done & just goes off to show the design opportunities one can consider when building himself a passively cooled or an SFF PC. We have already seen EPYC CPUs with high-end NVIDIA GeForce graphics card being passively cooled within large aluminum chassis which you can read more about over here.