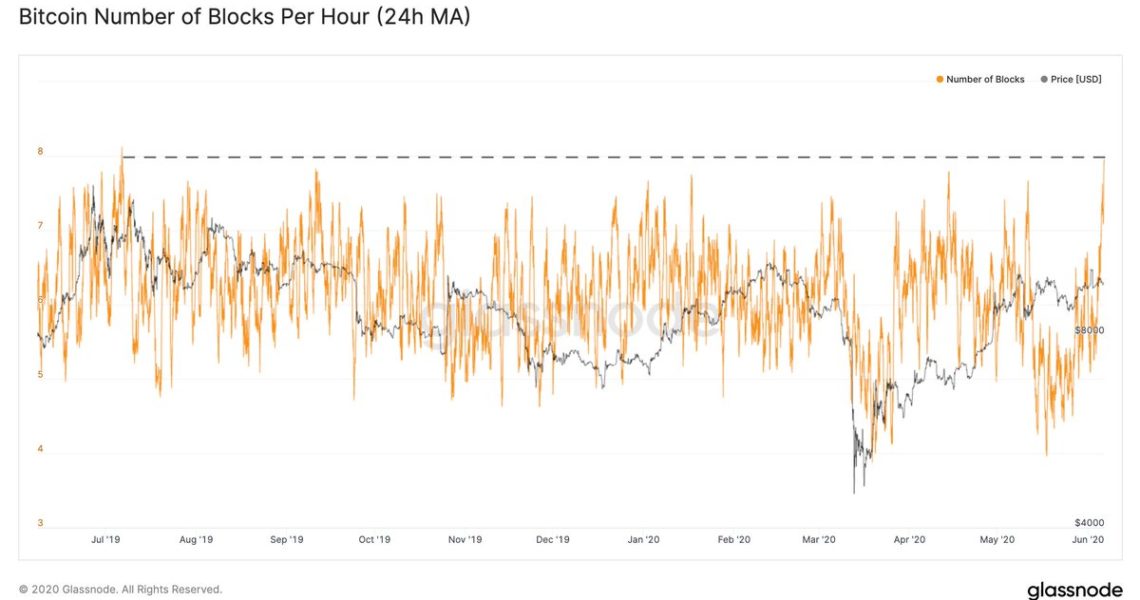 The Bitcoin hashrate is up this weekend after the network experienced it’s fourth negative difficulty adjustment this year.

The Bitcoin (BTC) protocol’s difficulty adjustment dropped over 9% on June 4, giving miners who shut off their machines a chance to join the competition once again. Moreover, Glassnode statistics show that blocks are being produced at a faster rate and at the highest levels since July 2019.

According to the Bitcoin (BTC) research and analysis firm, Glassnode, blocks are being produced at a higher level than before and at a level not seen in 11 months. That month in July 2019, the price of BTC was doing extraordinarily well and almost touched $13K per unit on global exchanges.

“Bitcoin blocks are currently being produced at a rate of almost 8 blocks per hour,” Glassnode tweeted on June 6, 2020. “This is the highest level we’ve seen since July 2019, and likely an effect of the recent difficulty adjustment.”

Statistics show that the BTC network experienced a decent-sized difficulty drop on June 4, 2020. It was the seventh-largest difficulty drop during the protocol’s entire existence and the fourth negative drop in 2020. The drop was approximately -9.29% and almost immediately afterward, BTC’s hashrate started climbing northbound.

Difficulty drops and increases are part of the system Satoshi Nakamoto designed and the Difficulty Adjustment Algorithm (DAA) adjusts every 2016 blocks. With blocks set at roughly every 10 minutes, typically DAA drops or increases take place every two weeks on average.

Data from Blockchain.com indicates that the hashrate dropped to a low of 90 exahash per second (EH/s) on May 26, 2020. News.Bitcoin.com also reported on the fact that hashpower was steadily increasing but the DAA drop on June 4, making it much easier for certain miners. Our newsdesk also reported that there were 17 mining pools hashing away at the Bitcoin network before the halving and now there are 32 pools.

Blockchain.com stats show that on June 5, the SHA256 hashpower ramped up to 109EH/s. Looking at data from today, June 7, 2020, shows that the hashrate has spiked even more to 120EH/s according to Fork.lol’s 12-hour averages.

What do you think about the difficulty drop on June 4 and the increased hashpower? Let us know your thoughts in the comments below.