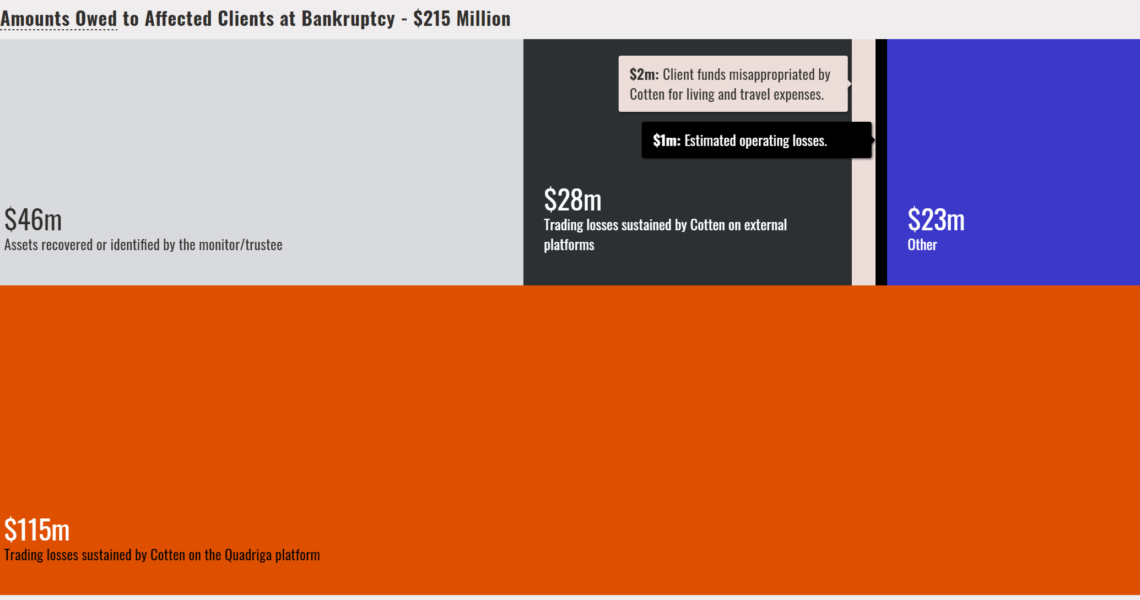 The Ontario Securities Commission (OSC) has completed its investigation of what happened to the defunct cryptocurrency exchange Quadrigacx which owes over 76,000 clients a combined $215 million in assets. Supposedly deceased, its founder Gerald Cotten was found to have committed a series of fraud, the regulator details.

The Ontario Securities Commission has spent 10 months investigating what happened to the Quadrigacx cryptocurrency exchange. The regulator published a 33-page report of its findings on Thursday. The Canadian crypto exchange announced on Jan. 14, 2019, that CEO Gerald Cotten had died while on honeymoon in India with his wife, Jennifer Robertson.

Noting that “Over 76,000 clients were owed a combined $215 million in assets … Ernst & Young, the bankruptcy trustee, was able to recover or identify just $46 million in assets to pay out to clients,” the OSC staff detailed:

The OSC staff found that Cotten “spent, traded and used” at will the assets clients deposited with Quadrigacx. “Cotten was able to misuse client assets for years, unchecked and undetected, ultimately bringing down the entire platform,” the staff’s report details.

The Quadriga exchange was cofounded by Cotten and Michael Patryn in 2013; it was incorporated in British Columbia with Cotten as the sole director. Patryn was convicted in the U.S. in a money-laundering case in 2015 under his prior name, Omar Dhanani. He left Quadrigacx in 2016, leaving Cotten with complete control of the platform.

Quadrigacx Is a Ponzi Scheme

The OSC staff found most of the $169 million asset shortfall — approximately $115 million — “resulted from Cotten’s fraudulent conduct, which took several forms.” Cotten “opened Quadriga accounts under aliases and credited himself with fictitious currency and crypto asset balances which he traded with unsuspecting Quadriga clients,” the OSC staff described. “He sustained real losses when the price of crypto assets changed, thereby creating a shortfall in assets to satisfy client withdrawals. Cotten covered this shortfall with other clients’ deposits.” The staff continued, “In effect, this meant that Quadriga operated like a Ponzi scheme.”

He also misappropriated millions in client assets to fund his lifestyle. In its final months, Quadriga had almost no assets left and was operating like a revolving door — new client deposits were immediately re-routed to fund other clients’ withdrawals.

However, many believe that Cotten is still alive and faked his death as an exit scam. Some have called for an exhumation and autopsy of his body. The platform ceased operations by Feb. 5 and filed for creditor protection. The complete OSC report on Quadrigacx can be found here.

What do you think about Quadrigacx and Cotten’s action? Let us know in the comments section below.