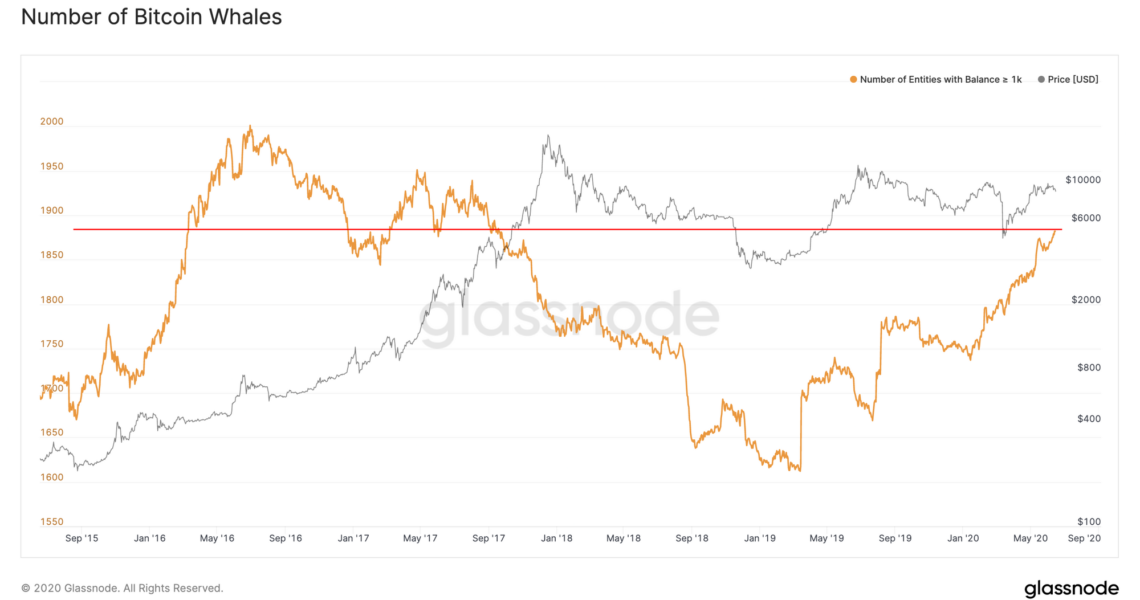 The number of so-called whales with 1,000 bitcoin or more in their wallets has climbed to 1,882 from around 1,650 in January. It is the highest the numbers have reached in nearly three years.

Whales may be defined as the Bitcoin ( BTC) community’s own version of the ‘deep state’, with the ability to swing prices up or down.

According to a new market report by Glassnode, the number of investors with large bitcoin holdings is approaching levels last seen in September 2017, when the price of the top cryptocurrency raced towards $20,000, its all-time-high.

The first time whale numbers reached similar levels was in March 2016, when BTC traded under $420. Then, the number of large-scale bitcoin holders touched 2,000, said the analytics firm in its ‘The Week-on-Chain’ report published June 15.

“The price of BTC is now more than 20x higher than it was when we first saw this many whales, implying that more wealth is being held by whales,” Glassnode noted.

“However, the average balance held by each whale has decreased during this period, such that whales actually hold less BTC now than in 2016, and less wealth (in USD terms) than in 2017,” it added.

The news comes as the price of BTC plunged to $8,900 on June 15 – the first time the coin traded below $9,000 in weeks. Analysts attribute the decline to whale action, with the known longtime hodlers liquidating the equivalent of $30 million in longs on Hong Kong-based digital asset exchange Bitmex.

What do you think about the growing bitcoin whale population? Let us know in the comments section below.