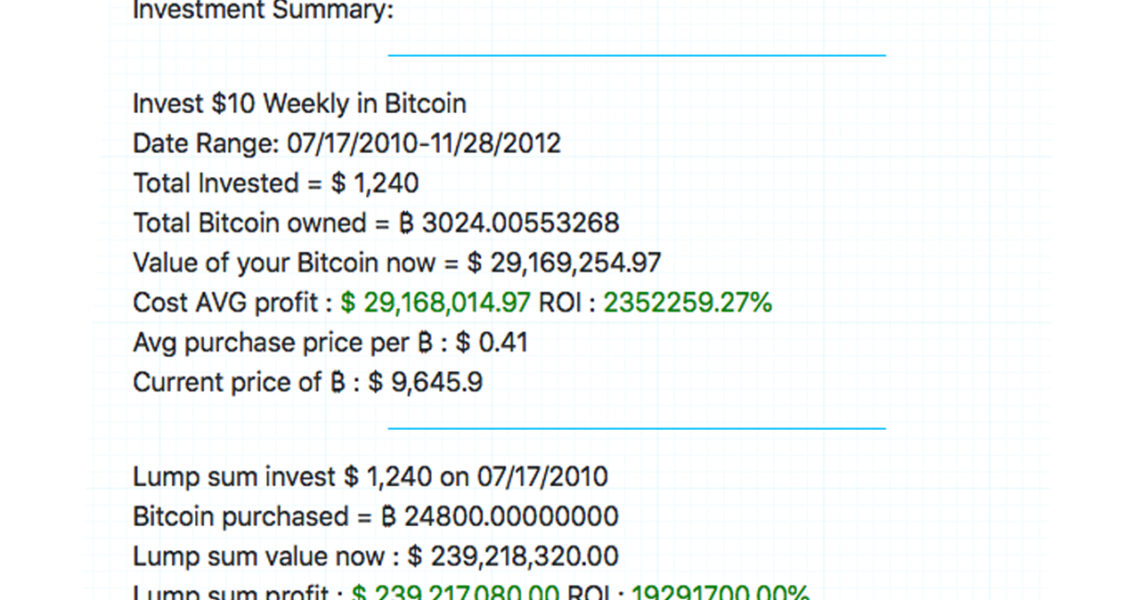 Average Price of Bitcoin More Than Quadrupled Between Reward Halvings Investing in bitcoin has been somewhat of a phenomenon, as millions of individuals have invested funds into the crypto-economy since at least 2010. One specific and lucrative method of investment is dollar-cost averaging. If an individual was to invest $10 a week into purchasing bitcoins since July 2010, the $5,130 USD (overall cost of investment) would have purchased 3,040 BTC, giving the individual over $29 million worth of gains in a decade.

Purchasing Bitcoin Via the Dollar-Cost Average Method Between Halvings

There is one method of investment that many crypto investors would call the smartest way to invest in anything. Essentially, the method called “dollar-cost averaging” is a strategy that investors use to invest funds into an asset across a periodic number of purchases, which essentially reduces exposure to overall price volatility.

So a person invests $1 to $10 per day or per week into a cryptocurrency and they become sheltered by the overall cost average over time. Finding the earliest price of bitcoin (BTC) is not too hard to find and we can highlight that it occurred a few weeks after Laszlo Hanyecz purchased two Papa John’s pizzas for 10,000 coins (BTC value would be $0.0025 cents per unit).

Not too long after Hanyecz’s exchange, historical resources say that the exchange rate for BTC jumped 10X until mid-July when a single BTC was swapping for $0.08 to $0.10 per coin. Coincidently, the popular exchange Mt Gox was launched on July 17, 2010.

If that individual invested $10 per week into bitcoins they would have invested $1,240 over the course of over 150,000 BTC blocks mined or three and a half years. The person would have gathered 3,024 BTC at an average purchase price of $0.41 per coin. The value they would possess using today’s 2020 exchange rate in June would be $29 million.

If that person instead started to invest in bitcoin at the start of the first halving at the end of November 2012, they too would have done very well. The average price between the first halving in 2012 to the July 9, 2016 halving is $376.75 per BTC. If the individual invested on November 28, 2012, you would have experienced an increase of 5,336% in value.

Now say they invested $10 a week since the first halving and stopped investing on the day of the second Bitcoin halving. The individual would own 15.68 BTC worth $151,264 for investing a measly $1,890 U.S. dollars. The average purchase price at $10 per week between this period would be $120 per coin. It’s safe to say that dollar-cost averaging is a less risky and cost-effective way to invest in anything, but with bitcoin, it has proven lucrative. Of course, BTC’s average cost percentage will rise, if the price rises going forward.

The higher the price, the higher the average over time and if it goes lower it will be the opposite effect. Someday spanning it over 50 years would be cool as it’s only been 11 and half years of collecting dollar-cost average metrics with bitcoin.