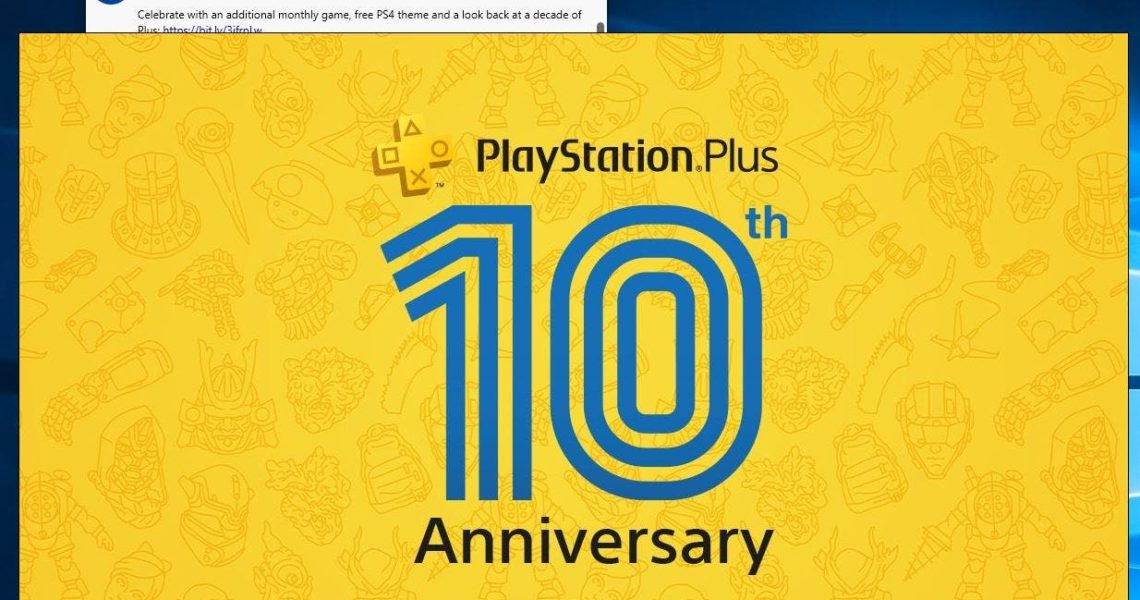 Last week, we told you how to get the old Twitter interface back, using GoodTwitter 2. Before I came across it, I had been looking for extensions and other solutions.

One of these was a Twitter client, called Tweetz. It’s an an open-source program for windows, that you can use to view your timeline from your desktop.

You cannot customize the location where Tweetz gets installed. When the program is run, you will see the following screen.

It tells you click on the “Get Pin” button to authorize your account. Hit the button and a new tab should open in your browser. Login to Twitter and authorize the application. Here’s the list of permissions it requires. It’s pretty much standard for a Twitter client to have such options. 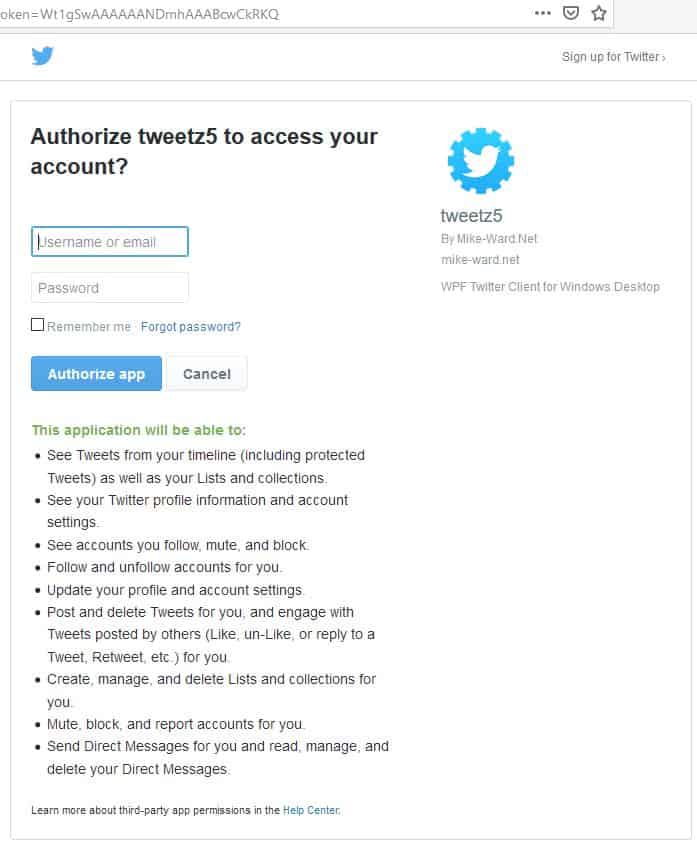 Twitter will display a PIN that you’ll need to enter in Tweetz.

Tweetz has a minimal interface with a dark theme. You can resize the window to make it larger or smaller. The navigation bar at the top of the window has five buttons. Clicking the Home button takes you to your timeline. The heart icon lists tweets that you’ve liked. The magnifying glass is the Search shortcut. Oddly, the “@ mentions” are located on the search page, so if you want to see tweets that you’ve been tagged in (replies from other users), you’ve to click on the @ button to fetch the mentions. It would’ve been better if it had its own shortcut on the nav bar.

The gear cog icon is used to access the program’s settings. You may hide images, profile pictures, extended content, your username in the title bar, tweets that contain sensitive content. Tweetz can be set to stay on top of other programs, start automatically with Windows, minimized to the system tray. 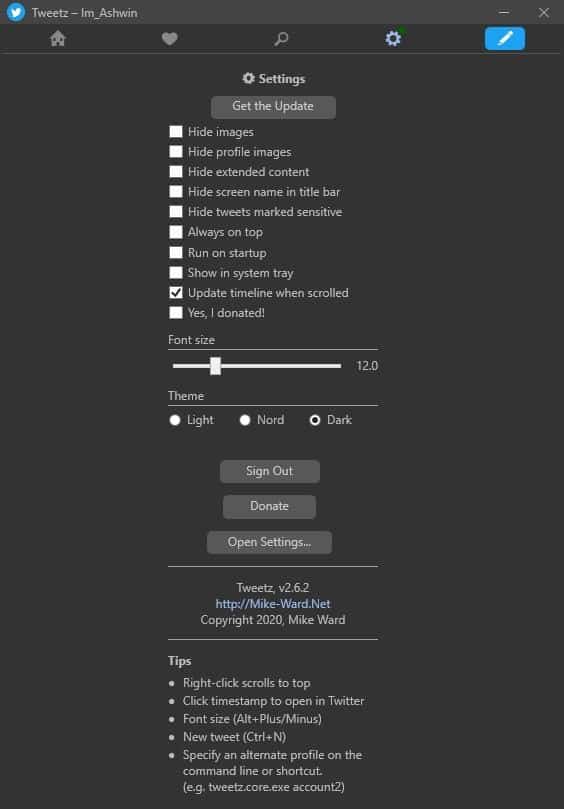 Drag the font size slider towards the right to adjust the text size. There are 3 themes in Tweetz: Light, Nord and Dark. 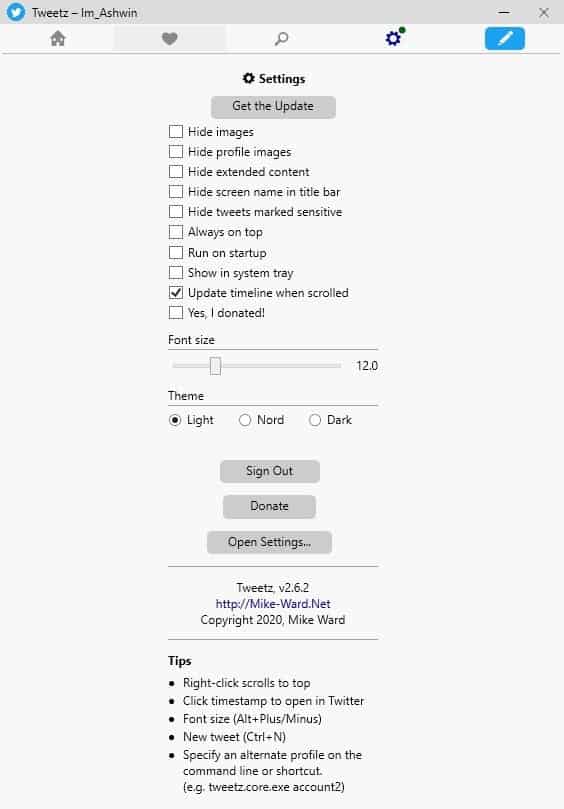 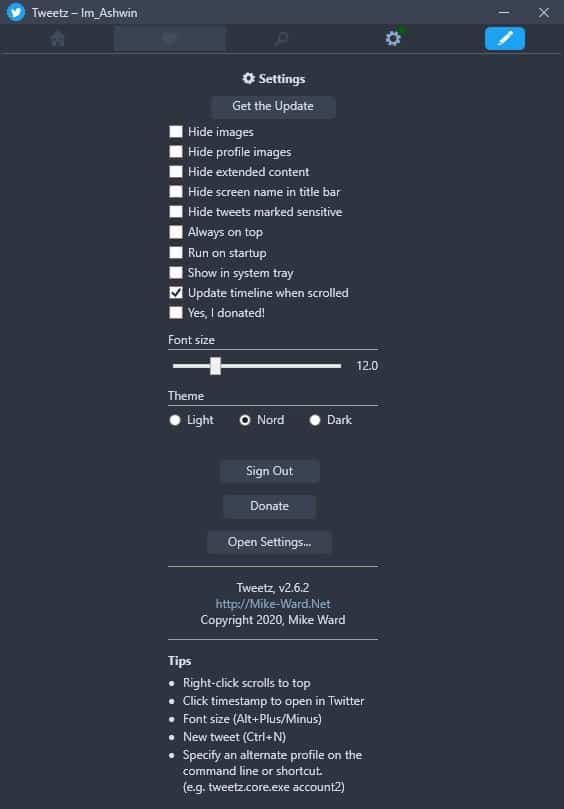 The application stores its settings in a text file. The settings page lists a few tips on how to control the program. Right-click (on any page) to scroll to the top, click on a timestamp to open the link in your browser, Ctrl + N to post a new tweet, etc. 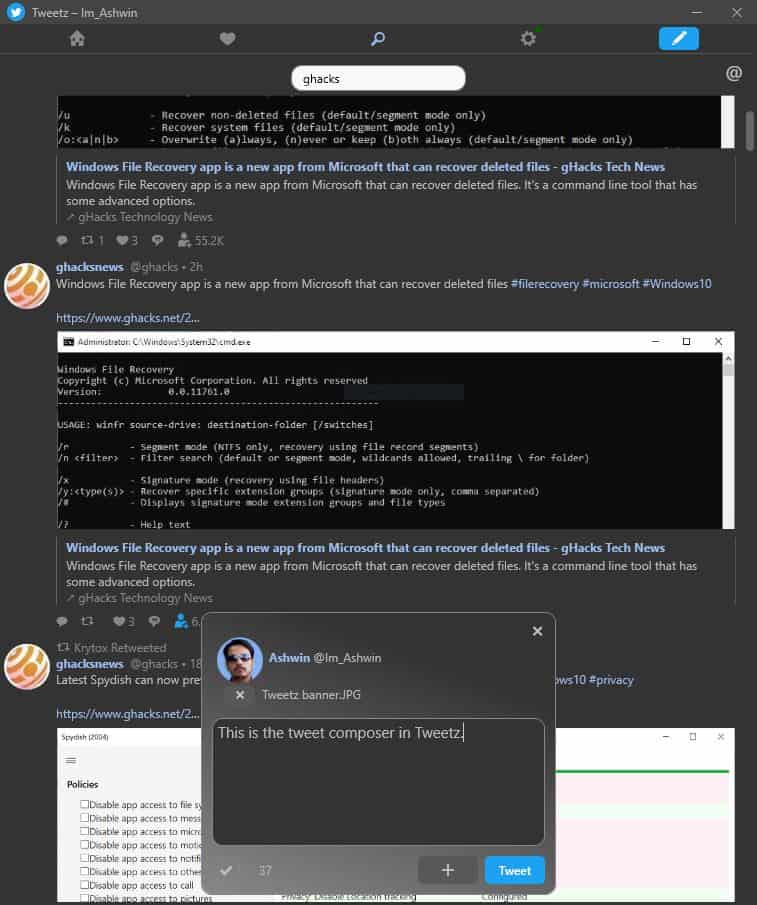 You can use Tweetz to post Tweets, retweet, retweet with comment, reply to tweets, like tweets, and follow users from the timeline. The program automatically pauses the timeline when you scroll down, and allows you to read the currently loaded tweets. Mouse over a link to view the full URL, or over a profile picture or username to view the profile info.

Click on an image to view a larger version of it, that opens in a pop-up window. 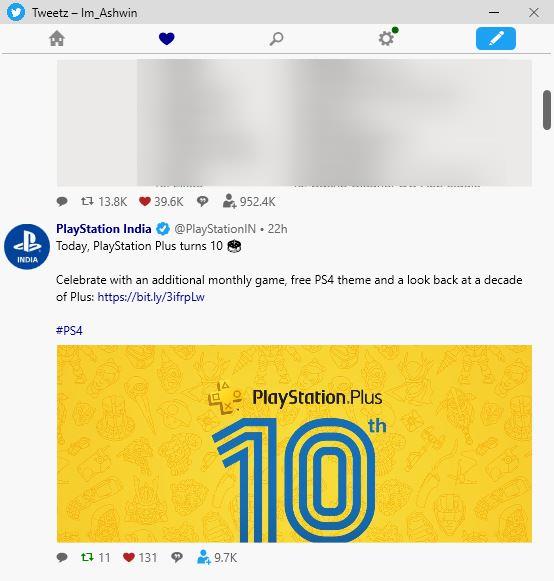 It has 2 buttons that lets you copy the picture’s URL or the image to clipboard. To return to your timeline, click on the image again.

Tweetz can play twitter videos too, and uses a pop-up player for it. Its controls are similar to the built-in image viewer. 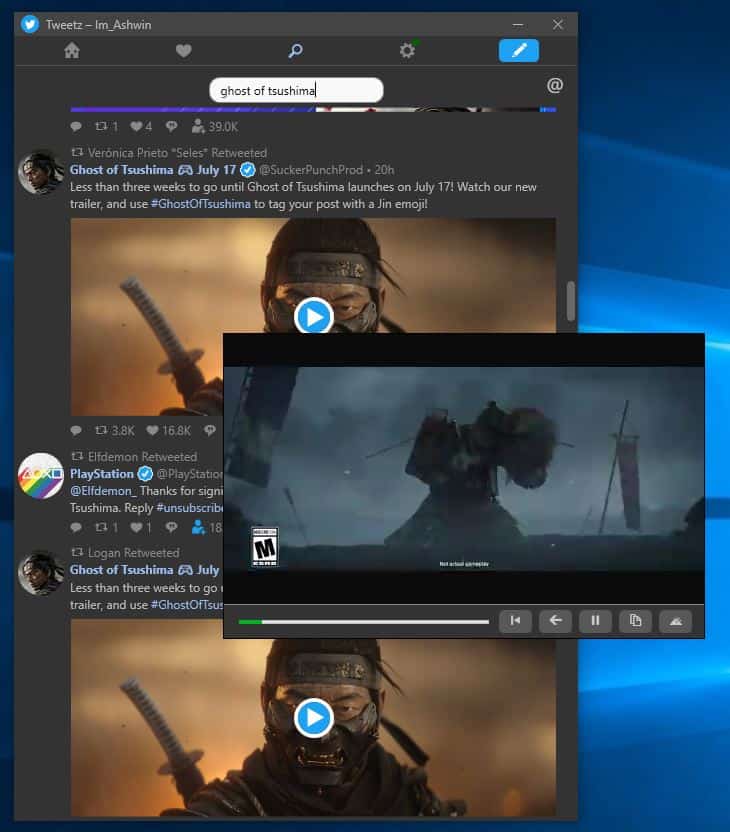 No program is perfect. Let’s discuss the flaws of the program. There is no way to manage your Twitter account from within the program. Tweetz does not support lists, which may not be a deal breaker for many, but as a user with customized lists I was disappointed. The biggest drawback however is that when you click on a Tweet, a timestamp or a profile, it doesn’t open a pop-up window to display the content. Instead, it opens the link in your default browser.

The program is written in .NET Core. A portable version of Tweetz is available, it’s called the self-contained version.

Note: This review is not based on the latest version that was released a few days ago. I used version 2.6.2 from about two weeks ago. The program displays a “Consider donating” Tweet from the developer from time to time. It is displayed even if you aren’t following him on Twitter.

Tweetz is impressive, but I would’ve liked it more if it opened Tweets and profile pages in its interface, rather than sending them to the web browser. If I were to rate it in a point system, it definitely gets extra points simply because it. does not use the “modern Twitter interface”.