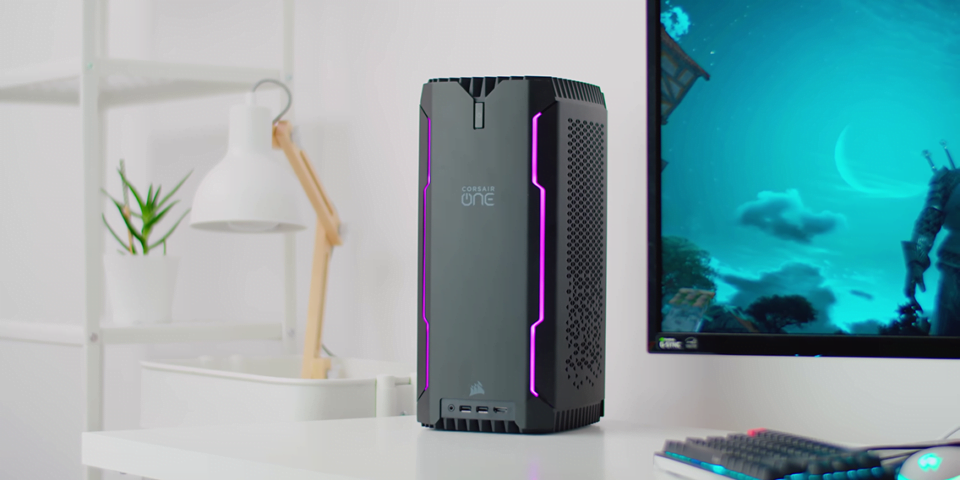 They RYZEN’d Up! Corsair ONE A100 Gaming PC Review

When Corsair first launched the Corsair ONE system three years ago we asked if they would ever consider doing a Ryzen configuration, and at the time we got a flat “no, it’s not worth it”. How the tables have turned… because the Zen 2 processors are not only extremely competitive, but they even surpass Intel’s best efforts.

Meet the latest iteration of the Corsair ONE ecosystem: The a100. This is a machine powered by a Ryzen 9 and GeForce RTX, giving us insane power density in a 12 liter water-cooled enclosure. I am now considering using this as my daily production machine instead of my custom water-cooled rig, but first let’s see how this thing stacks up in terms of cooling noise and performance in all types of scenarios. There were a few surprises along the way, but that’s exactly what I was expecting. It’s powerful, it’s small, it’s pricey, and it’s still one of the very few pre-built systems that I would actually recommend.

Now I don’t need to go over the design because it’s exactly what it has been for the past few years. We have thick aluminium plates, triangular side ventilation, cool fins up top and bottom, and tasteful RGB strips that you should always set to one color if you have good taste. Because of the symmetrical design I can now position the system on my left side.

I really was hoping to see an updated I/O at front though, one that included USB Type-C since most X570 ITX motherboards have an internal connector. The same goes at the rear for the video output, since most RTX cards have a Type-C DisplayPort out, which isn’t reflected with the new a100.

There are three configurations with Ryzen 9, all with confusingly the same model name. The price ranges from between $3,000 to $4,000 USD as CPU and GPU and storage is upgraded. The system I have is a 3950X, which unfortunately is a $400 premium over the mid-tier model that has the same specs but with the 3900X. The lowest tier a100 seems to be the best value to me and should outcompete the Intel equivalent with the i9-9700K and the RTX 2080 Super. Let’s not forget that Corsair launched the ONE i200 in February with the Intel 10th Gen processors for $4,500 USD that should compete directly with a high-end a100. They reveals just how good of a value the 3950X machine is in comparison.

I’m really happy to see that they are using an ASUS motherboard – specifically the X570-I – which has a rich I/O for an ITX machine, including WiFi 6 and PCIe Gen4 for insanely fast storage speeds with that MP600 NVMe SSD. The power supply is the SF600 600W Gold SFX fully modular unit from Corsair. The RAM is a dual-channel 32GB Corsair Vengeance kit rated at DDR4-3200. Aside from the GPU, the motherboard, and the Seagate hard drive, everything inside by Corsair. I’m surprised to find no accessories, not even the ridiculous sharkfin WiFi antenna from ASUS because there are only normal antennas here.

If you were to build your own system with the exact same components you would save a bit on cash, that’s obvious, but the difference in price actually makes the a100 kind of competitive in the pre-built space because of the a100’s unique cooling system. All the pre-built systems that I configured myself to match the hardware of the a100 had a pretty significant price variance. The iBUYPOWER system was fairly close to the $3,500 USD DIY price, the CyberPowerPC with the awesome Lian Li PC-O11 Dynamic was even cheaper at $3,300 USD, but these are all fairly large systems. When we start to go small – like with the Digital Storm BOLT X – the price premium of a custom SFF machine is revealed. The Origin PC is also well above $4,000 USD.

One of the the main advantages of the Corsair ONE system is the fact that it’s a small computer with a capable enough cooling. It has one fan up top exhausting all the heat generated from the internals, while the CPU and GPU have their own passive all-in-one coolers with slim radiators. It’s kind of impressive what the system can achieve without fans sitting directly on the radiators. The only other active cooling component is a small fan on the GPU that is cooling the VRMs and the PCB, but that’s about it. Getting inside is easy and it does not void your warranty, which is awesome. You can swap out components or clean the machine with everything neatly organized out of the box. You can only control the top fan’s RPM as the GPU fan and the water pumps are automatic.

Let’s first go over gaming performance versus my other Corsair ONE, as it has the same GPU. In games like Doom Eternal, Titanfall 2, Witcher 3, and Control both systems achieve about the same FPS. The two outliers here include Battlefield V where the higher CPU clocks on the i9-9900K deliver better frame rates, but COD: Modern Warfare had me confused because the Ryzen 9 system had much better 1% lows while GPU clocks were very close. This might be due to higher memory speed on the new a100 system, but the game also benefits from higher core counts when it comes to the 1% lows.

When we take a look at temperatures over time both RTX 2080 Ti’s eventually stabilize around the 60°C mark, which is impressive for this caliber of a GPU. when we plot frequencies over time the card on the a100 boosts 50MHz higher versus the other system. Obviously you can max out the power limit inside MSI Afterburner, but I found that after about 20 minutes it still boosts below 1900MHz while giving you much hotter temperatures. The CPU temperatures during gaming are totally under control on both machines, but with a lot less fluctuations versus the i9-9900K. I do have to mention the fan curve on the a100 system is a lot more aggressive because the 3950X is putting out so much extra heat compared to the i9-9900K.

The fan is constantly spinning versus on the Corsair ONE i165 where the fan completely shuts down at idle. That constantly spinning fan in turn helps to cool the GPU on the Ryzen system, which is why it’s cooler in the first 7 minutes of my gaming test, but that also means that the ONE a100 is not as quiet as the ONE i165. However, they are both equally loud at load. Another thing to mention is that for some reason the GPU fan on my a100 system is louder than the one in the ONE i165. Both machines exhibit some sort of coil wine, which is audible when the fans are not spinning, but when there is some form of air flow going on it does kind help to drown out all the coil wine.

I wanted to leave the best for last as the 3950X really flexes its muscles in any CPU intensive task. In programs like Blender it is twice as fast as the i9-9900K system, completing all six benchmarks, and the same applies to Cinebench scores. I was very surprised at the Davinci Resolve render times using the native encoder (instead of NVIDIA’s) giving me incredibly fast H264 exports with the a100 machine. Unfortunately it doesn’t give me any significant advantage over my own ThreadRipper PC.

Finally let’s take a look at temperatures over time on both machines. What we have here is a bit of struggle with the 3950X, as the tiny radiator does all it can to carry the heat away. The average temperature hits 85°c after the first 5 minutes with several hot spikes during the operation, while the i9-9900K is more under control. When we overlay frequencies over time, both fluctuate quite a bit, with the 3950X dropping clocks around the 10 minute mark to stabilize temperatures with an average of 3.9GHz throughout the operation. The i9-9900K actually increased its frequencies after 5 minutes, but with many more fluctuations averaging at 4.2GHz. CPU power for both looks normal 95W on the i9-9900K without any enhancements through the motherboard, while the 3950X fluctuated like a heartbeat trying to modulate for best frequencies and controlled temperatures.

Ultimately what we have here is a 3950X stacked inside an extremely compact 12 liter enclosure with pretty adequate cooling. It is not fantastic, but frequencies behave as expected, and my only concern is the lack of any more potential for cooling. It’s not like we can increase the fan speed anymore. It’s clear that Corsair has prioritized on form factor, noise profile, and just cramming as much power as possible without redesigning the whole cooling system to accommodate a much hotter chip like the 3950X. It’s still carrying the torch of what the original Corsair ONE formula tried to achieve, and that is give you incredible power density both for play and for work.

I hope you enjoyed this review, let me know what you think of the a100. The naming scheme is a bit odd, especially since you cannot differentiate between the a100 and the previous, but that’s a relatively minor issue. Overall, I still like this whole concept and hopefully there is an a200 on the horizon with redesigned elements on the exterior and on the interior to accommodate the latest hardware.

Buy items in this review below: