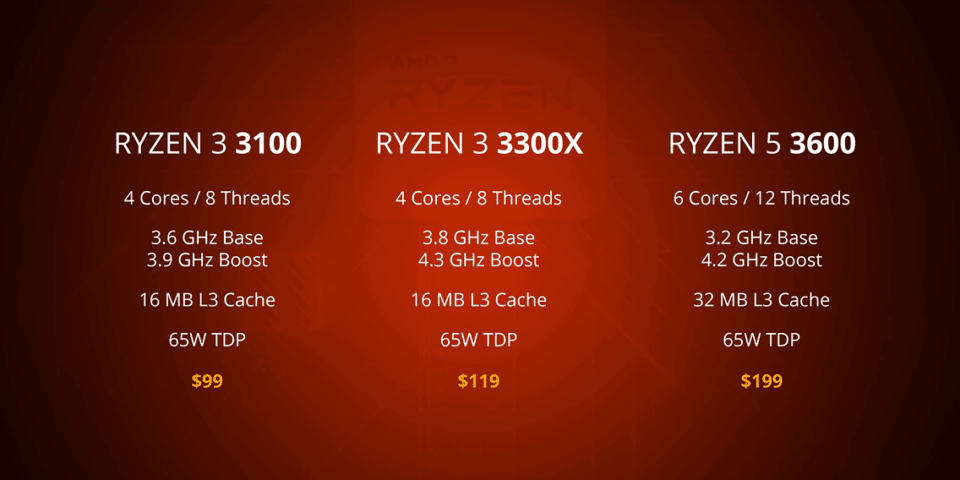 Finally, after months of rumors and a lot of waiting, around AMD has finally shown off what their lower-priced Ryzen 3 line up looks like. Not only that but they also announced the new B550 motherboards, and I actually think they are just as exciting as the processors themselves. Why you may ask? Well it’s all about blending the Zen 2 architecture into an affordable and modern platform that has a future technology is built-in like PCIe Gen4. I think that it’s going to be a really important element for many people moving forward. Given the global situation, many people are turning towards gaming as a way to relax and somewhat enjoy the quarantine, but many cannot afford pricey X570 motherboards and want something a bit more future-proof and feature-rich than the existing B450 motherboards. This is why this whole announcement with Ryzen 3 and B550 are so important in the current state of the market and the world.

Let’s start things off with the Ryzen 3 series, because we know a lot more about them than the actual B550 motherboards. The processors look amazing, I’m genuinely excited because the previous Ryzen 3 CPUs were only available with integrated graphics like the Ryzen 3 3200G or through OEM channels like 2300X. Now it looks like AMD saw a real opportunity to introduce something a lot more affordable into the retail channel.

Starting off with the Ryzen 3 3100, this is the lowest priced 4-core/8-thread CPU around, and best of all it cost just $100 USD. I’m pretty sure with these new Ryzen 3 CPUs, we will see a lot more affordable and super capable editing and gaming machines moving forward. Moving up to the Ryzen 3 3300X, it gets higher base and boost speeds along with a $20 price bump, but it uses the same 4-core/8-thread layout. And if you’re looking for something else, then the next model up is the Ryzen 5 3600, which has 6-cores/12-threads and a $200 price tag. One interesting thing to take note of with these new Ryzen 3 CPUs is that they have two less cores than the 3600, but only half the L3 cache. The TDP of these is also pretty low at just 65W, but I also need to mention that TDP doesn’t really mean power consumption because they are super efficient 7nm CPUs, so their actual power needs may be lower than the TDP would have you believe.

The biggest question is how these new Ryzen 3 CPUs stack up against Intel’s offerings. Right now the Intel lineup has a pretty big price gap between the $75 Core i3-9100F and the $150 Core i5-9400F. You can actually see how AMD is playing the game by positioning the new Ryzen 3 CPUs right in between, so the Intel CPUs almost act as bookends. Technically this new Ryzen 3 lineup should offer better value than Intel, because of PCIe Gen4 support and higher memory speeds, plus they will ship with the Wraith Stealth CPU cooler. However, there is another thing to consider here and that is Intel is rumored to launch the Comet Lake S desktop CPUs fairly soon. Other than Zen 2 hitting super affordable price points it’s a fantastic business move that comes just at the right time. It puts a ton of pressure on Intel supposedly new lineup before it’s even launched, and an 8-thread CPU for $100 is something I’m definitely onboard with. It will be interesting to see if Intel responds with lower price points, but I mean it’s Intel so most likely not.

Now what about these new B550 motherboards? Well regrettably we don’t have much information on the motherboards right now, but I really want to talk about what I’m hoping for. AMD has already confirmed that B550 will support PCIe Gen4, which isn’t super important for graphics card right now, but I’m really excited for access to super-fast Gen4 NVMe SSDs on an affordable motherboard. I totally understand that these new SSDs are not cheap, but they will eventually drop in price and having this forward compatibility for really fast NVME SSDs on a B550 motherboard is a good deal. This gives you an opportunity to build a system with the B550 motherboard now, and have the expectation that you will be able to upgrade some of the SSDs in the future. One of the biggest questions right now is how much are these be B550 motherboards going to cost? This is important because you can find some relatively affordable X570 motherboard options right now that will fare well with the Ryzen 3 CPUs. Hopefully, they B550 will hit the same price point as they B450, but we don’t know yet if the existing B450 motherboards are forwards compatible with the new Ryzen 3 CPUs or if they will be discontinued.

Either way, this is a really exciting announcement from AMD. The Ryzen lineup is just getting better and better. Budget gamers will get more cores and threads, and you could potentially build something really powerful and affordable without having to spend too much of the budget on the CPU and motherboard. Instead you will be able to allocate that money towards a better GPU, where it actually matters for games. I think that is the most important takeaway with these new Ryzen 3 CPUs, they are giving us good horsepower at the core, while not completely blowing up your budget so that you can’t don’t have any money left to spend on the rest of your system. That is a win for everyone!