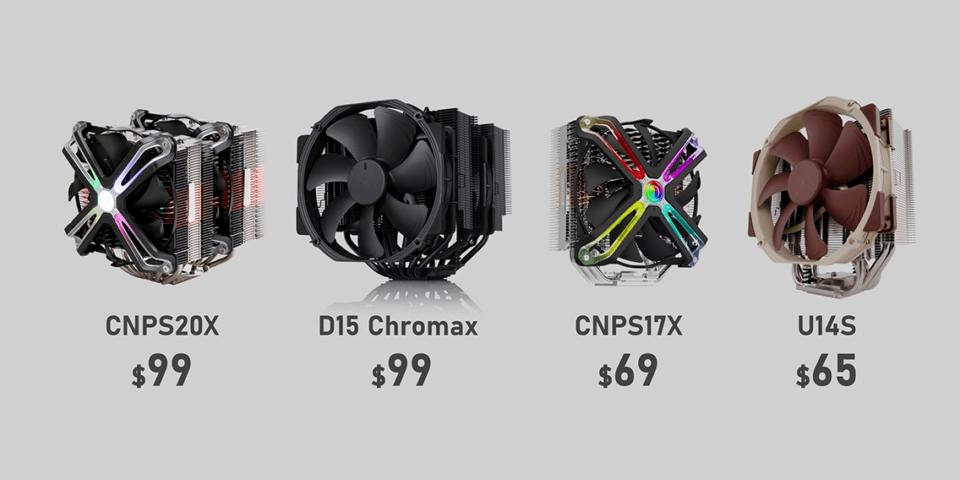 In a surprising move we have two new coolers from Zalman, which we haven’t seen all that much of lately. The two air coolers are the CNPS17X and the CNPS20X, which is the bigger dual tower design heatsink. These brand new coolers popped onto our radar when we started seeing a few review showing them either matching or beating some of the most popular air coolers available on the market today. And yes, that does include the Noctua NH-D15 and the NH-U12A.

Today, we are going to be running these new coolers through our methodology, and we will find if these Zalman CNPS models really beat the best of the best? We are really anxious to see the results since Zalman has more than 20 years of cooling experience, and they have made some pretty big claims about these coolers too.

Let’s start things off with pricing, and like most high-end air coolers are quite pricey. The CNPS20X is a $100 USD, so the same as the Noctua NH-D15 Chromax, while the CNPS17X is $70 USD which hits somewhere between the Noctua NH-U12A or NH-U14S. While this isn’t cheap, Zalman is an established brand with a long track record of building quality heatsinks, so they might just be worth it.

As for their aesthetics, well that will be super personal, but I like the stealth approach that Noctua, be quiet!, and Scythe take with their coolers. However, if you want something with RGB, then Zalman has you covered. And if you don’t like all that bling you can just turn off the illumination in your motherboard’s software. Both of these coolers have very similar designs, but the CNPS17X is much more compact. It uses a pretty traditional design with a very interesting open frame 140mm fan. For comparison, it’s a little bit bigger than the Noctua NH-U12. Taking a look at the fin array, Zalman created what they would call a 4D corrugated design that leads to a more efficient air flow through the aluminium fins, so the fans don’t have to produce as much static pressure. The copper area is just aluminium with a simple copper electroplating, but it does look pretty cool. The five heat pipes run down into a base that is polished to a mirror finish.

Moving on to the CNPS20X, and it’s basically a super-sized CNPS17X with dual cooling towers and a pair of fans. Instead of five heat pipes, it uses six slightly larger ones that run up into the fins. From a size perspective it’s comparable to the Noctua NH-D15, but it’s also a bit taller. One of the things I really want to focus on are the unique fans Zalman is using here, and of course the RGB lighting will be the first thing you will see. The illumination comes from an area in the middle, which is super bright and it’s kind of impossible to show the individual LEDs in the center. The LEDs are painfully bright though, which is a arguably good thing since the light then spills into the four clear plastic areas.

There are a couple of issues here. First of all, the CNPS20X and the CNPS17X use a non-standard fan mounting mechanism, so it’s impossible to switch them out for higher performance fans. Also, you will need to mount them onto fan guides yourselves, and that involves a bunch of small screws, a ton of flimsy plastic, and some metal clips. It’s a total total pain in the butt. Speaking of installation, be prepared to be completely overwhelmed, because when you open the box and start taking out the hardware, there are tons of small bits and pieces that are needed to put these coolers together and none of the bags are labeled, so that just adds some confusion. Like I said, just a single fan needs a lot of pieces, but that’s just the tip of the iceberg, especially if you are using an AMD or lower-end Intel system or a Z- or H-series motherboard.

Let’s start with mounting on an X299 motherboard since that is the simplest. First up you screw in four standoffs and then mount a cross plate with four bolts. Now you can either do this vertically or horizontally depending on the configuration you prefer. Just watch out, the plate has holes for all Intel sockets and both positions will actually fit on a LGA 2066 system, but only one will allow you to properly mount the cooler. Just make sure to use the outer holes and everything will go fine. The next part is the same for every installation on AMD and Intel. You will need to carefully align the screws with the threaded studs, which is pretty straightforward on the CNPS17X since they are easily accessible.

For the CNPS20X you will need longer a Phillips head screw driver, and since the screws aren’t magnetic threading them between the towers is a total pain in the butt. Not only that, but shame on Zalman for not including a screwdriver with a $100 cooler, pretty much everyone else does. After that, it’s just a matter of mounting the fans and dealing with the mess of cables coming out of them. Remember each fan has two wires, one for the RGB illumination and the other for powering the fan itself.

Moving on to AMD mounting, and this is where things get even more complicated. The first thing you will need is the world’s most complicated backplate. Basically, this one component is made to fit AM3, AM4, and all non-HEDT Intel motherboards. To actually make it compatible with any platform you will need to slip on these small plastic side caps and vertical nuts. The next step is to apply what Zalman calls their loading block, which is a sticky pad that makes sure the back plate doesn’t fall off and it gets flush mounted to the motherboard. If you thought the process was overly complicated, it has barely begun. You will need to install four tiny washers, screw down the standoffs, position the cross brace, and secure it in place. At this point I was wishing for the Noctua or be quiet! installation process. Finally, you just have to screw down the heat sink and you are finally done.

With all of that being done, what about clearances? Well both coolers have fan clips and that can easily be used for avoiding PWM heatsinks and taller memory. However, there is a bit of a problem here. As you can see, even with the shortest memory I have the fan still had to be pushed far upwards. That will certainly cause a problem for some cases and it’s something to keep in mind.

And now the moment that you have all been waiting: For the results. Just a friendly reminder, you can read about our testing methodologies here. Kicking things off and both coolers actually post some of the best numbers we have seen. It’s actually amazing to see the CNPS17X keep up with a bunch of dual fan designs while the CNPS20X overcomes the NH-D15 to take the crown. One thing I wanted to bring to your attention is how the CNPS17X stacks up would be NH-U14S, since both of those are single fan 140mm designs that cost about $70 USD. At default fan profile, they are pretty quiet too, but it’s obvious that the CNPS17X needed to ramp up its speeds a bit higher to compensate for its smaller size. The CNPS20X on the other hand is really, really impressive. Pushing fan speeds to 1,000 RPMs shows some interesting results, with the CNPS20X improving over the stock test while the CNPS17X actually sees higher temperatures.

The reason for that is pretty simple. At the default fan speed profile, the smaller cooler ended up running over 1,000 RPMs while the CNPS20X ran below that speed. The noise readings proved the hypothesis. Even though the CNPS20X takes the crown in temperatures, it does start getting quite a bit louder. However, to the naked ear it’s literally just as loud as the NH-D15 and that’s pretty impressive. The CNPS17X on the other hand, not too great, since it got beaten by the NH-U14S in both temperature and noise in this test. Bumping up to full speed and the improvements aren’t really all that worthwhile. Personally, I think this is because both coolers were already operating near their peak efficiency at stock CPU speeds, so pushing more air through them wasn’t going to do that much. This is the first sign of concern, as Zalman’s fans start heading above 1,200 RPMs the amount of noise being produced increases exponentially and that’s likely due to their unique design. The Noctua coolers are clearly superior here.

Now before I get into the overclocking results, I do want to quickly sum up the stock CPU results because Zalman’s performance on our Core i9-10980XE can be used as a great representation of how the CNPS17X and the CNPS20X would stack up on lower wattage processors. For example, I’m sure that the results would be very similar to these on a Ryzen 9 3950X or a Core i9-9900K. However, overclocking the Core i9-10980XE separates the men from the boys. I should also mention that this pushes thermals above what the smaller CNPS17X is rated for.

Well the first shock is the CNPS17X held on for dear life and actually cooled the CPU to a point where it didn’t throttle. However, would I want my processor regularly chugging along 101°c? Probably not. On the other hand, the CNPS20X ended up beating the Dark Rock Pro, but the NH-D15 started to pull away with this one. Both coolers also started to get pretty loud, with the smaller one running at 100% fan speed the whole time. It’s important to note that the NH-U14S got similar temperatures, but it’s much quieter than the CNPS17X. The CNPS20X hits a point where it became the loudest cooler in this test. Running the fans at a constant RPM has the CNPS20X delivering really respectable results, but they are still not good enough to pull ahead of Noctua’s beast. At this point the CNPS17X is overwhelmed, but that was expected. The last test just repeats what we have already seen before.

And with that, I think it’s time to wrap this up. The big question is whether the CNPS20X is a Noctua killer? Well that actually depends on how you look at things. You see for lower thermal loads, it actually ends up beating the NH-D15 while operating at similar decibel levels. However, as you start to increase the heat load, the NH-D15 stays ahead while remaining quieter. If you want bragging rights for having the best RGB air cooler on the block, this is it. Just be mindful that Zalman’s competition is miles ahead when it comes to ease of installation.

Now what about the smaller CNPS17X? It offers great overall performance and good acoustics, and it’s the first air cooler (along with its bigger brother) that we have come across that offers RGB lighting. However, if you don’t really care about all the RGB goodness, and if you don’t mind the color scheme, you are actually better off with the Noctua NH-U14S. Yes, it comes with weirdly coloured fans that you will have to get used to, but for $70 it’s a great overall option. There is also the Scythe Fuma 2, that is around $60 and it offers heaps of value provided that you can actually find one on sale.

On that note, I think it’s time to wrap this up. Let me know if you are interested in these coolers or if you have any other air coolers that you would like us to check out, we will definitely add them to our testing.