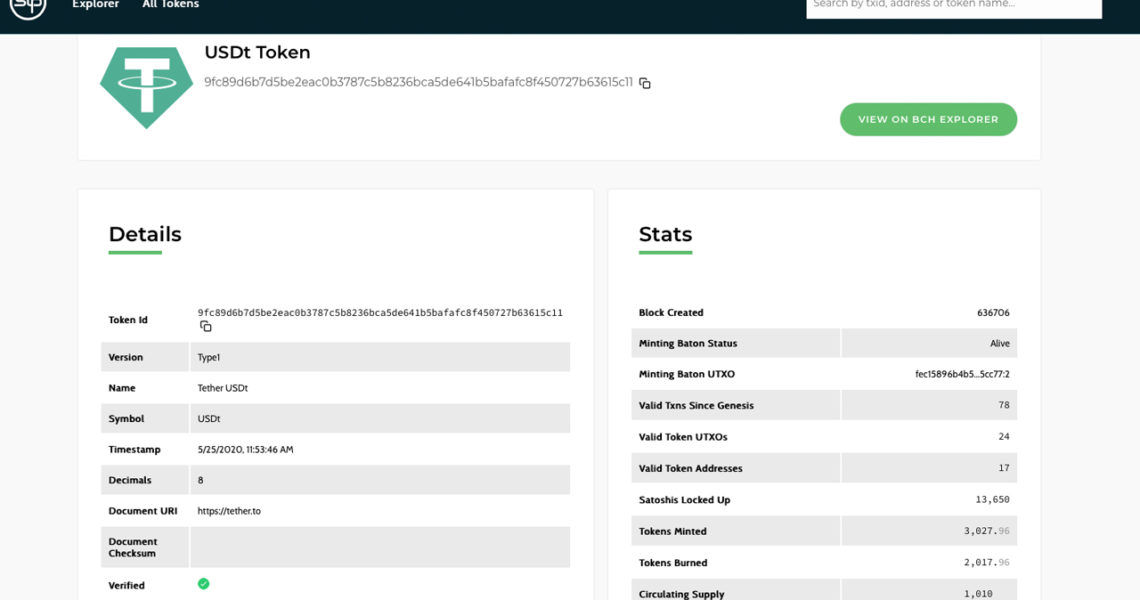 The most popular stablecoin tether (USDT) has officially been minted on the Bitcoin Cash blockchain via the Simple Ledger Protocol (SLP). At press time there’s only 1,010 SLP-based USDT in circulation, as the firm Tether Limited seems to be issuing small amounts and testing the SLP framework.

Tether (USDT) is the king of stablecoins in the crypto economy and according to the company’s transparency page, there are more than $9.8 billion tethers in existence.

The stablecoin is a token that is also hosted on a number of blockchains including the Ethereum network, Omni Layer, Algorand, Tron, Liquid, and the EOS chain. Not too long ago, news.Bitcoin.com revealed that tether (USDT) was migrating some coins over to the Bitcoin Cash (BCH) blockchain via the Simple Ledger Protocol.

Tether Limited’s transparency page now shows that the company has been minting and testing the SLP framework. The data website simpleledger.info shows that the Tether team has officially minted 3,027 USDTs so far on the BCH chain.

However, 2,017 SLP-based USDT tokens have been burned, which only leaves 1,010 SLP-based USDT in circulation at the time of publication. A thousand dollars worth of stablecoins is not much, but Bitcoin Cash proponents believe that the company is simply trialing the SLP infrastructure. The official USDT token ID is shown at Tether Limited’s official website, alongside the balances of tether on other blockchains. There’s been a total of 50 SLP-based USDT transactions so far on the Bitcoin Cash blockchain.

The SLP-based USDT rich list shows that this address has the most stablecoins with a balance of 874.14 USDT at the time of publication. The rest of the coins in circulation are spread out through a number of different addresses.

The largest amount of USDTs on any blockchain is held on ETH with $6 billion in ERC20-based tethers to-date. Of course, Bitcoin Cash fans were both pleased and skeptical about the appearance of USDTs on BCH.

On the subreddit r/btc, BCH fans discussed the recently issued SLP-based USDT on the forum. On July 7, Sideshift.ai announced that the Bitcoin Cash version of USDT is now live on the swapping platform.

BCH proponents also discussed holding USDTs on the Bitcoin.com Wallet thanks to the recently added asset breakdown and stablecoin features. On Twitter, the Sideshift team wrote: “Be one of the first humans to shift USDT on SLP.”

What do you think about tether (USDT) being minted on the Bitcoin Cash chain? Let us know what you think in the comments section below.

The post The Popular Stablecoin Tether Is Now Circulating on the Bitcoin Cash Network appeared first on Bitcoin News.