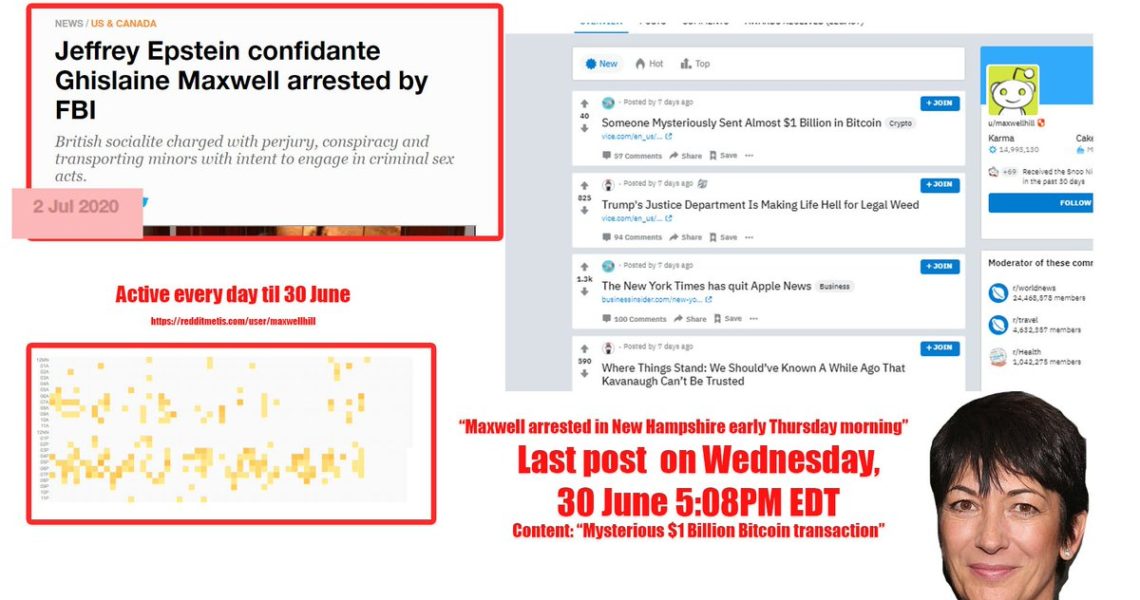 The cryptocurrency community has been discussing the infamous Ghislaine Maxwell, the associate of the financier and convicted sex offender Jeffrey Epstein. Maxwell was recently arrested and many speculators think she may see the same fate as Epstein before she talks. Moreover, it seems the last time Maxwell used Reddit, her last post was about someone mysteriously sending almost $1 billion in bitcoin on Wednesday, June 30, 2020.

Ghislaine Maxwell was a well known associate of the now-deceased Jeffrey Epstein. The financier Epstein is a convicted sex offender who allegedly had a ring of sex slaves that were used to satisfy celebrities, politicians, and known British royalty figures.

Maxwell is accused of being the main ringleader behind Epstein’s sex trafficking and blackmailing empire, and was recently taken into custody by the FBI. Interestingly, Maxwell is tied to well known people in both the Democrat and Republican parties including people like former U.S. President Bill Clinton, and the current incumbent Donald Trump.

Both powerful American leaders can be seen in a variety of photos with Maxwell in the pictures.

Now it seems that Maxwell was a Reddit connoisseur and used the platform quite a bit. Her last post on June 30, was specifically about bitcoin, when she posted a Vice article called “Someone Mysteriously Sent Almost $1 Billion in Bitcoin.” The Reddit post was Maxwell’s last post on the platform, but according to the Twitter user Joe Leonard, Maxwell was an avid Reddit user.

“Ghislaine Maxwell was the first person on Reddit to hit 1 million karma LMAO,” Leonard tweeted. “She’s the #8 karma to this day. Her posts to /r/worldnews constituted roughly 30% of the posts there. This connection was made after she was arrested and that account stopped posting there after 14 years.” Leonard gives a comprehensive overview of Maxwell’s Reddit habits and notes:

[Ghislaine Maxwell] hasn’t posted since June 30th. She was arrested on July 2nd.

Jeffrey Epstein’s confidant Maxwell was recently transferred to NY-based prison after her arrest. It is well known that the former Bear Stearns partner Jeffrey Epstein liked bitcoin (BTC) and spoke about the subject often before his death.

“When we talk about gold as a store of value that just means a lot of people agree to pay the same price for one ounce of gold,” Epstein once said. “In 2017, enough people agree on the value of bitcoin that it can serve the same purpose. There will only ever be 21 million bitcoins, but this limit comes from computer code, not by how many bitcoins are left to remove from the earth. If we learn tomorrow that half of Montana contained a secret cache of gold, the value of gold would decrease instantly. Bitcoin doesn’t have this problem.” It is uncertain how much Maxwell liked bitcoin, but her recent Reddit post suggests she followed the subject intently. As for the crypto community knowing that Epstein enjoyed the cryptocurrency, a number of people have suggested that “Jeffrey Epstein’s bitcoin intrigue deserves scrutiny at MIT”

This was after it was found that the former director of MIT’s Media Lab, Joichi Ito, allegedly attempted to “conceal financial contributions from pedophile Jeffrey Epstein.”

U.S. federal prosecutors allege that Maxwell, between 1994-1997, “assisted, facilitated and contributed to Jeffrey Epstein’s abuse of minor girls by, among other things, helping Epstein to recruit, groom and ultimately abuse victims known to Maxwell and Epstein to be under the age of 18.” Maxwell faces a myriad of sex trafficking charges and she “poses an extreme risk of flight” according to prosecutors.

“[Ghislaine Maxwell] absolutely no reason to stay in the United States and face the possibility of a lengthy prison sentence,” the prosecutor’s memo stressed.