FanCtrl is a free software program for Microsoft Windows devices to control the speed of PC fans. Fans are still an esssential parts of computer systems, especially on the desktop. Components such as the processor or video cards use fans for cooling purposes.

While that is necessary to keep components from overheating, it is sometimes problematic because of the noise that these fans make.

I used the free tool Speedfan about a decade ago to control fans on Windows PCs to reduce the noise these fans generated. For video card fans, I used MSI Afterburner, a free software for all video card manufacturers.

FanCtrl is a free program for Windows. It requires the Microsoft .NET Framework 4.0 but can be run from any location.

FanCtrl works similarly to Speedfan. The program displays the temperature of components that it detected on start and the fan speed of those components. I ran it on several systems to get a feel for it; it supports plenty of hardware components including processors, video cards, and motherboards.

The temperature of each component, as reported by the component or motherboard, and the fan speed is listed by the program. You can rename device and fan names for better identification, and change the fan control value easily.

A click on options displays a number of settings. You may use them to change the update interval from the default 1000ms, enable or disable the use of libraries and support for certain devices, and configure the program to start with Windows.

As far as support is concerned, the developer notes the following components are supported:

The fan control program for Microsoft Windows devices supports two additional options. The first allows you to configure the program’s automatic controlling of fans. A click on the option opens a new configuration window. 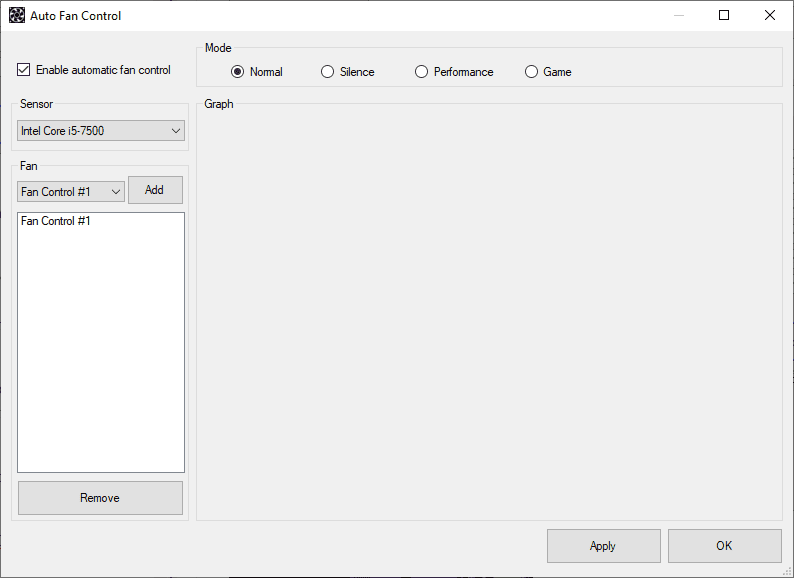 You need to enable “automatic fan control” and may then assign modes to sensors and fans. Supported modes are normal, silence, performance, and game.

The second feature that FanCtrl supports is an on-screen display. Activate it to display temperature and fan speed information as well as RAM and FPS in an overlay on the screen.

FanCtrl is a well designed open source application; it may not work on every PC you run it on as some configurations may not be supported, but if it does, it does deliver. You may use it to reduce the speed of supported fans to reduce the noise level of the PC; this works best if the temperature increase caused by the fan rotation decrease does not impact the PC’s stability.

Now you: Do you use tools to control the fan speed of your PCs?