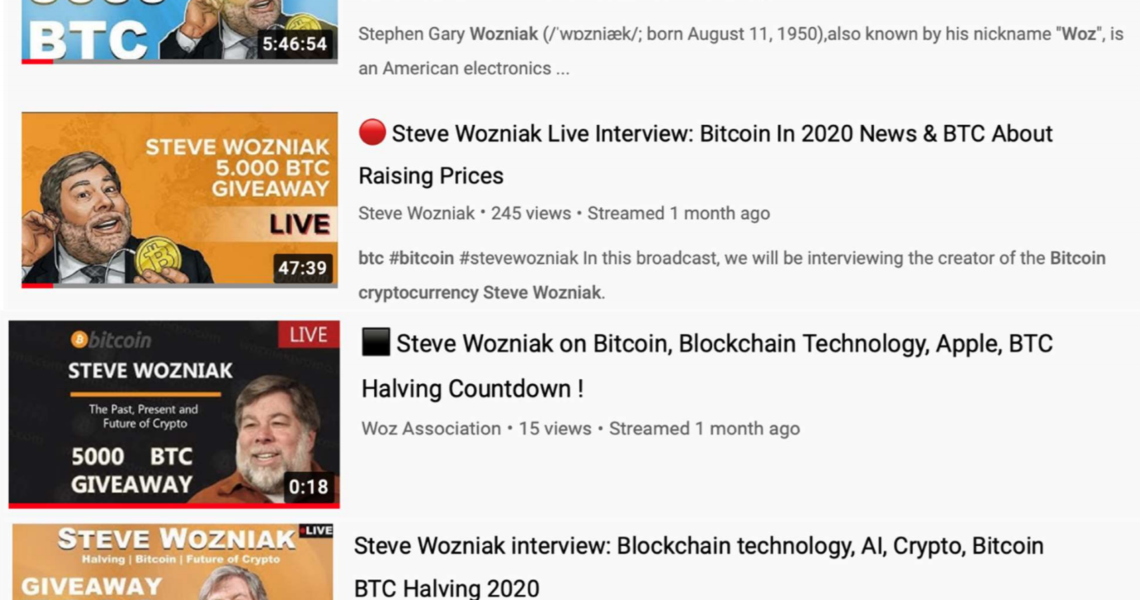 Apple co-founder Steve Wozniak and 17 other victims have sued Youtube and Google for allowing, promoting, and profiting from bitcoin giveaway scams. However, Youtube insists that it is not at fault for scammers using its video-sharing platform for cryptocurrency giveaway scams and other fraudulent schemes.

Steve Wozniak and 17 other fraud victims have sued Youtube and its parent company, Google, over a bitcoin giveaway scam that has persisted on the popular video-sharing platform for many months. According to Tuesday’s filing with the Superior Court of the State of California in San Mateo County, the plaintiffs have demanded a jury trial.

Wozniak says Youtube and Google have allowed scammers to use his name and likeness to promote a fraudulent bitcoin giveaway for months, adding that the two companies have repeatedly ignored his requests to remove the scam videos. Twitter, on the other hand, took down similar bitcoin giveaway tweets the same day they were posted during the great hack that saw many high-profile accounts asking people to send them bitcoin, promising to double any amount sent.

According to the court filing:

Defendants [Youtube and Google] significantly harmed Wozniak and Youtube users by knowingly allowing the bitcoin giveaway scam to thrive, promoting the scam, profiting from the scam, and failing to warn users.

The plaintiffs say that Google and Youtube “knew about the bitcoin giveaway scam because Wozniak, countless other scam victims, Youtube users, and media articles” informed them about “every aspect of the scam.”

While the two companies have the means to stop the scam videos on Youtube and warn users about them, the court document states that they “have not done so; instead defendants materially contribute to the scam by failing to timely respond, promoting the scam, and selling targeted ads for the scam.” As a result, the plaintiffs have lost hundreds of thousands of dollars in the bitcoin giveaway scam, the court document notes.

The plaintiffs are asking the court to order Youtube and Google to immediately remove the fraudulent videos and warn users about the bitcoin giveaway scam. They are also seeking compensatory and punitive damages.

Wozniak and the 17 victims are not the only people who sued Youtube recently over crypto giveaway scams. Ripple Labs Inc. sued the company in April for failing to stop scammers from posting about fraudulent cryptocurrency giveaways that asked viewers to send XRP to a scam address. In addition to swindling hundreds of thousands of dollars from victims, Ripple alleges the scam harmed its brand and the image of its CEO, Bradley Garlinghouse.

However, Youtube has argued that it is not at fault and not liable for scammers using its platform. The company filed a motion in the U.S. District Court for the Northern District of California on Tuesday to dismiss Ripple’s lawsuit.

Youtube cited Section 230 of the Communications Decency Act which “bars claims lodged against website operators for their editorial functions, such as the posting of comments concerning third-party posts, so long as those comments are not themselves actionable.” The company insists that according to this law, computer services should not be treated as the publisher or speaker of other providers’ content.

Youtube granted a verification badge to one of the hacked channels and also profited from the scams by ‘knowingly selling’ paid ads on behalf of the fraudsters.

In its motion, Youtube argued that those badges did not change the third-party content into material it created or developed, therefore its “unwitting verification” of the scam account was not itself unlawful. Meanwhile, a Youtube spokesperson maintains: “We take abuse of our platform seriously and take action quickly when we detect violations.”

Many scam videos and ads are regularly found on Youtube. News.Bitcoin.com recently reported on a number of bitcoin giveaway scams, such as those claiming that Spacex and Tesla CEO Elon Musk, Microsoft founder Bill Gates, and others are giving away bitcoin. The Elon Musk bitcoin giveaway scam has been particularly successful, having raked in millions of dollars already.

Do you think Youtube is at fault? Let us know in the comments section below.