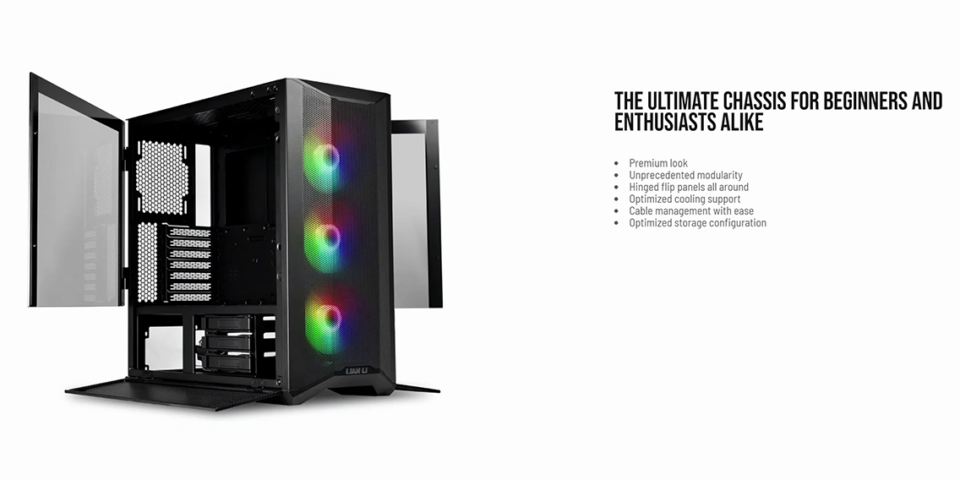 It’s a funny thing how the Lancool II Mesh is launching just two days apart from the Phanteks P500A, maybe it’s a coincidence or maybe not I don’t know, but either way I am glad that this airflow-focused case is finally available.

This is Lancool II Mesh, a very promising mesh treatment upgrade of the original Lancool II, which was fantastic feature-wise but lacked in the airflow department. This new model is supposed to remedy that, but make sure to check out our original Lancool II review because the guts are basically identical with a few minor modifications that I will go over. Thankfully there is still a lot of very interesting things to go over in the Lancool II Mesh.

After several days of testing and over 20 different airflow configurations that I tested inside the Lancool II Mesh, I am genuinely excited about this enclosure. I really hope that Lian Li can manufacture enough of this case because it will 100% be in demand. I don’t want to over sell it, but at $89 USD it has the same price as the original Lancool II, but it now with so much additional airflow and it is available in both black and white. The white model is going to be $10 extra. There is also the Performance Edition, which is what I have here, and it includes two 140mm fans of the front and a single 120mm fan at the back.

Lastly, there is also the RGB model, also at the $89 price points, so you have to choose between going with the bling and three 120mm RGB fans in the front or going with something more performance-oriented and muted looking. I think it’s a fantastic direction for Lian Li to take, not to separate the RGB versus performance side and keep it at the same price.

The mesh is similar to what we saw with the Phanteks P500A, but the holes here are slightly bigger at 1.5mm versus 1.0mm on the Phanteks enclosure. That is probably why the airflow performance is better, but I am concerned about dust accumulation, particularly on the interior since the holes aren’t large enough to catch really fine particles. That is something to kind of be concerned about. I totally understand their decision not to include a dust filter behind the metal mesh, because that will significantly reduce airflow. The metal mesh here is pretty rigid, i it doesn’t flex when you push on it.

One of the reasons why I did so many air flow tests is because the shroud door on the side is now perforated, unlike the totally solid one on the original. Lian Li told me that the perforation on the side helps with GPU cooling, especially when you add additional fans on the PSU shroud, which I will be testing out later.

As for the rest of the exterior features, everything is identical to non-Mesh model. I love the swivel tempered glass side panels on both sides. We do have little magnets in the front and little pegs that kind of sit into the frame so the glass panel doesn’t vibrate or shake during transport. You cannot secure the side panels fully, but the magnets are pretty strong so they latch in nicely. You can remove the power supply doors, there are four screws on the each side, and they don’t completely open fully so if you lift the case they maintain their shape.

The I/O is up top with dual USB 3.0 ports, power and reset buttonsh, a combo audio jack, and an optional USB Type-C port if you buy the accessory. If this accessory is not populated it kind of looks weird like as if something got stuck in that little cut out. Since I have the performance model we do have a built-in fan controller, and I diddn’t think that I wouldn’t enjoy it that much, but it has low, medium and high speeds, plus PWM control if you just plug it into your motherboard. The fan controller is at the back, sitting on its own little removable plate. All the fans here are PWM, which is fantastic at this price point. The fan controller can support up to six 4-pin fans.

The unique thing about airflow in this enclosure – outside of having the metal mesh at the front that is completely unrestrictive – is the fan bracket at the front that is pretty modular and I hope more companies try to recreate the same design. It can support up to a 360mm radiator, but the cool thing about the bracket is it has a lot of mobility within the frame. For example, if you are doing a push and pull setup, you can mount the brackets slightly inwards to have the fans on the outside of the bracket to have the radiator and more fans. You can also rotate the bracket which might make installation of fans easier down the line if you are trying to remove something from the actual frame.

The whole idea here is to give users the range of clearance between the frame and between the power supply cut-out. That range is 55mm all the way up to 110mm. As for the top we have a removable dust filter and our usual configuration of fans that are both slightly inwards and offset from the motherboard and support up to a 240mm radiator.

As we move inside one of the coolest features is the rotatable cable cover. After removing two screws you can rotate the bracket and have spacing for an E-ATX motherboard without compromising on the cable routing and the whole ease of assembly.

As you can see, the power supply shroud is slightly different versus the original, and that is because we can install two SSDs in that spot or remove those brackets and install dual 120mm fans. That change is supposed to significantly help with cooling of the GPU, and that is why that perforated mesh is so important.

My only complaint about this entire design is the bottom hard drive cage. I do appreciate that it sits on rails, so you can move it slightly away from the power supply or away from the front to give you a bit more clearance. You can also buy this optional hot-swappable bracket at the back, which is great for this price point. However, the drive cage itself isn’t meant to be removable. The reason why you want to remove it is because it interferes with that entire cut-out at the front, and the case is pretty compact already so having the power supply in its closest position to the cage leaves very little room for the power supply cables. I did forcefully remove the drive cage from the front just to clear out that whole basement area, but Lian Li made it clear that the intent is for this drive cage to sit and live in the basement.

As for additional storage, we have drive caddies on the right power supply door, plus we have two additional SSD caddies behind the motherboard tray. I really appreciate that this $89 case has all these little panels that are installed at the back to hide all your cables and make that whole section look really clean, which is good since the whole right side panel is also glass. The only thing I did not appreciate are the thumb screws, because the threading is very short and it is making it really difficult to put it back together. All the screws in the front were also extremely tight for me, I almost stripped a few screws, but Lian Li double checked their quality control to make sure that doesn’t happen for retail units. Lastly, there is a power supply dust filter at the bottom.

After having assembled a full system I can confidently state that this is an extremely easy case to work in. The movable cable bar really makes everything easy and clean looking, and it does not interfere with that USB 3.0 cable coming from the side. The back of the motherboard is clean, primarily because of all the plates that you can cover all the cables with.

Now it’s finally time to talk about the air flow and this thing is absolutely impressive. Let’s begin with the stock configuration at high fan profile, 72°C for the CPU and 72°C for the GPU, which are fantastic temperatures. Going to the medium fan profile didn’t change anything, and going to the low profile only caused the CPU and GPU temperatures to rise slightly. Removing the front panel altogether at high fan profile does drop our temperatures slightly, and adding a single fan on top of the power supply shroud improved our GPU temperatures, but slightly raised our CPU temperatures. I’m guessing because that heat gets carried from the GPU into the CPU area. Lian Li has confirmed this result and this happens on their end too.

When I shifted the fan bracket closer inwards away from the front panel and closer to my hardware components it actually increased our GPU temperature by 1°C at the high fan profile. This could be a margin of error, but one interesting thing here was that the noise profile was slightly louder versus when the fan bracket was right against the mesh. And speaking of the noise profile, keep fan speeds at medium or low because otherwise it’s quite loud.

Finally, when we compare the Lancool II Mesh versus all my other cases this is the coolest case that I have tested. Of course this is at maximum speed, and the noise profile is quite similar to the really loud Phanteks P500A when the fans are running at full blast. Lowering the fan controller to medium gives us the same temperature, but at much reduced noise level.

If you have been looking for the airflow enclosure that isn’t too large, and normal ATX components look totally fine and proportional inside this interior, the Lancool II Mesh Performance Edition is an absolutely fantastic choice. It doesn’t have much bling like the original, but features-wise this is the case to beat in 2020. We are giving it the hardware conducts them leanly. You done good. All right, guys, I’m Dimitri. Thanks so much for watching. Let me know what you think of the LANCOOL II MESH. Will this be your next case? Let me know in the comments.