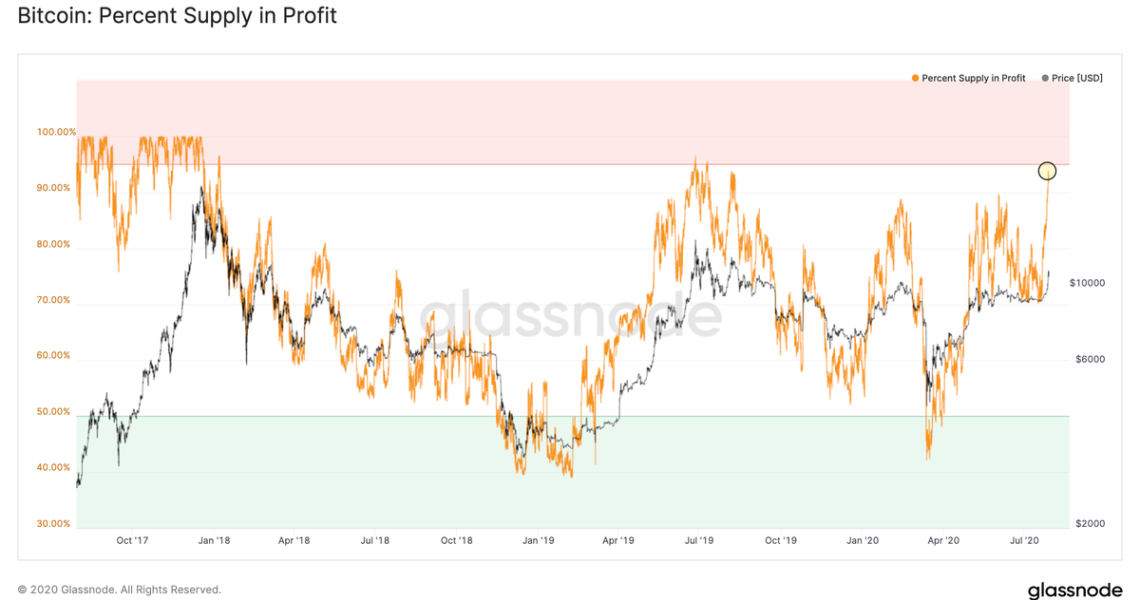 Onchain data shows that bitcoin’s breakout above $11,000 puts 93% of the circulating supply in a state of profit. Additionally, seven-day metrics show that bitcoin’s “realized price” has recovered from the low that took place on March 12.

The research and analysis firm Glassnode revealed that when the price of bitcoin (BTC) is over the $11,000 range, 93% of bitcoin in circulation becomes profitable. At the time of publication, BTC has been struggling to hold that momentum as the price has shifted below the $11k range a couple of times on Tuesday.

The spike on Tuesday led to a decent jump in onchain profits Glassnode detailed on Twitter.

“BTC’s break above $11,000 has led to a sharp increase in the onchain supply in profit. Currently, almost 93% of the circulating bitcoin supply is in a state of profit – the highest level in over a year,” the analytics firm tweeted.

To add to those stats, bitcoin (BTC) charts show that long term holding has touched a new high. “62% of Bitcoin supply (11,400,000 BTC) has not moved in at least a year,” the bitcoiner Kevin Rooke told his 11,000 Twitter followers on Monday. Furthermore, BTC “profitible days” stats from the web portal Lookintobitcoin shows that the crypto asset has been profitable over 97% of its lifespan.

The current optimism in the world of cryptocurrencies has been quite different this time around as the world is dealing with the reaction to Covid-19 and the faltering economy. During the last few days, the USD and U.S. bonds have weakened considerably and many economists think the central bank will suppress benchmark interest rates this week. Vijay Ayyar, head of business development at Luno believes that central banks will keep bolstering crypto assets like BTC.

“My view is that with the major governments declaring unprecedented stimulus packages … we will see continued bullish momentum across markets. So that includes equities and gold as well. And BTC and crypto will follow in this regard. Added to the fact that a vaccine seems within reach as well now, no reason to be bearish near term,” Ayyar said.

With a lifespan of 97% profitability and 93% when the price is over $11,000 is a good sign crypto proponents. However, bitcoin mining operations need another $1,500 more for miners to start prospering, as they did before the May 11 halving.

A report from the blockchain analytics provider Tradeblock shows that $12,525 per BTC would bring miners over the edge and $15,062 per coin would improve profits a great deal.

What do you think about BTC profitability after bitcoin’s recent runup? Let us know what you think in the comments section below.