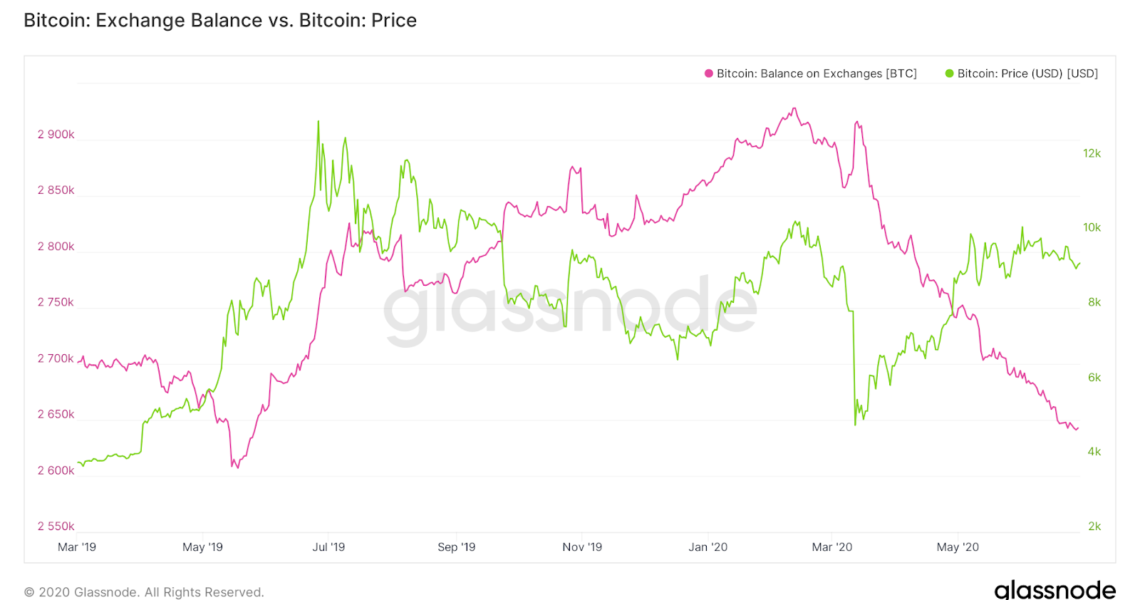 The number of bitcoin held on exchanges has touched a 12-month low, as bitcoin exchange balances have reached levels not seen since June 2019. According to onchain statistics, there’s more than 2.6 million BTC held on global trading platforms worldwide.

Data from a number of sources show that the bitcoin (BTC) held on exchanges has dropped to a low not seen in over a year. This statistic gives crypto proponents bullish optimism, as the last time BTC exchange balances were this low the price of bitcoin (BTC) jumped very close to the $13k range last summer.

As of July 30, 2020, according to Glassnode’s “Exchange Balance vs. Bitcoin: Price” stats, there are 2.6 million BTC on global exchanges.

The number of bitcoins held on exchanges did see a brief low during the market rout on March 12, otherwise known as ‘Black Thursday.’ News.Bitcoin.com’s collected data had shown in April that crypto exchanges saw bitcoin reserves drop by 70% since that day in mid-March.

In mid-May more than $220M in BTC was withdrawn from crypto trading platforms worldwide since the third halving.

The cryptocurrency data and analytics company Arcane Research tweeted that the low number of BTC held on exchanges means investors prefer to hold rather than sell.

“BTC deposits at major exchanges have dropped significantly since April and are currently at the low-levels of May 2019,” Arcane noted. “This suggests that more users prefer to store their BTC in private wallets, which may lead to a lower selling pressure in the upcoming months.”

However, other speculators think that the funds are funneling into alternative crypto assets rather than bitcoin (BTC). “Probably also reflective of the ability for people to buy alts directly from fiat, rather than first through BTC,” one individual replied to Arcane’s recent tweet.

For instance, market data shows that while BTC is up 19% during the last month, money flowing into ETH pushed the price up by over 40% in the last 30-days. XRP’s 30-day stats show gains over 38% and bitcoin cash (BCH) jumped 27% last month.

Today on July 30, the top five exchanges with the largest number of BTC reserves include Coinbase, Huobi, Binance, Bitfinex, and Okex.

Just recently, the San Francisco-based exchange Coinbase was responsible for 1 million BTC worth of reserves and today the trading platform only has 944,000 BTC according to the Bituniverse “Exchange Balance Rank” metric.