Zeus Capital LLP has released a new report reiterating its earlier stance that Chainlink is a giant pump and dump scheme.

This new report comes after the little known asset management and research firm took flak for attacking Chainlink’s token in an earlier report.

In what it now terms part 1 of its exposé, Zeus Capital LLP asserts in the latest report that the over 140 partnerships announced by Chainlink so far are an exaggeration. The asset management firm contends the project has been created to enrich the founders. 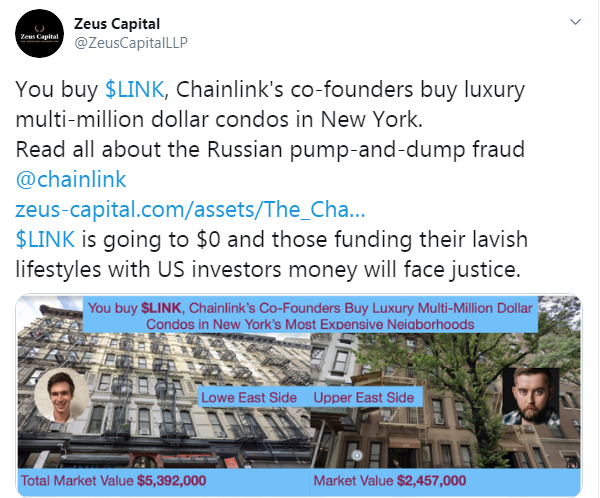 In the report, Zeus Capital LLP questions the announced game-changing partnerships with “technology giants, such as Google, Oracle, and T-Systems.”

Unmasking Chainlink’s alleged modus operandi, Zeus Capital LLP claims it starts with “a large company showcasing some of their products (usually via a blog post) and casually mentioning Chainlink as a theoretical intermediary in delivering the product to blockchain clients.”

Zeus Capital LLP, which some Twitter users have linked to Nexo Finance, admits that Chainlink’s core proposition is to connect APIs with blockchain and “so a pretty good number of legacy players can easily be involved.”

Still, Zeus Capital LLP contends that the infrastructure supporting Chainlink is overhyping the project as well as overstating the partners’ eagerness to proceed.

“Smartcontract and the people behind Chainlink are taking it from there, loudly announcing how a big tech company’s name is eager to do business with them,” argues Zeus Capital LLP. This is done to shore up the price of Link.

To support this claim, Zeus Capital LLP gives an example “when Chainlink announced the ‘integration’ with Google, the price was USD 1.19 per Link.” However, when Google tweeted about the same a few hours later, “the price skyrocketed to USD 1.93, up by a staggering 62% in less than 24 hours.”

Zeus Capital LLP further argues that Chainlink’s team has engineered a state-of-the-art self-fulfilling scheme. It allows them “to maintain full control over the price and dump as many tokens to their true believers as they wish while keeping them happy.”

At the time of writing, Link traded at USD 7.64 just enough to make it the 10th most capitalized token ahead of EOS.

Meanwhile, Zeus Capital LLP’s list of allegations against Chainlink includes pay-for-play schemes, a plethora of integrations with “dead” projects as well as “outright lies about the size and type of the relationships.”

The asset management firm also accuses industry-leading outlets of “deliberately or unintentionally playing their role in the process.”

However, despite detailing Chainlink’s alleged fraud scheme, Zeus Capital LLP itself stands accused of spreading fear, doubt, and uncertainty (FUD) in the market in order to short and make a financial gain.

A statement by Zeus Capital LLP in its latest report, boldly states that “the current tokenomics and lack of commercial applications cannot justify Link’s price.”

Based on this assessment, Zeus Capital LLP “is recommending short-selling Link with a target price of 7 US cents.”

On Twitter, Chainlink supporters are fighting back against Zeus the Capital LLP prediction by encouraging peers to buy Link tokens this weekend.

Meanwhile, Nexo Finance, which has been linked to the exposé, has reportedly distanced itself from Zeus Capital LLP.

As one of the latest organizations to partner Chainlink, Nexo Finance suggested said in a Telegram channel statement that it is being targeted because its “staff is well versed with the Chainlink subject and because its OTC desks deal in Link.”

In another twist, a UK based investment bank which shares a similar name with Zeus Capital LLP has disassociated itself from the asset management firm.

In a statement, the investment bank said the following:

For the avoidance of doubt we would like to state that Zeus Capital Limited has not produced or published research on this subject and has no relationship or affiliation with Zeus Capital LLP whatsoever.

What do you think about these Zeus claims? Tell us your thoughts in the comments section below.